Introduction/Mission: In Burkina Faso, tetanus remains a public health problem. The aim of the study was to describe the epidemiological, clinical and evolutionary profile of tetanus at the Yalgado University Hospital Center in Ouagadougou.
Patients and methods: We conducted a descriptive cross-sectional study of tetanus cases admitted in the department of infectious diseases from January 2000 to June 2014. The data were collected from the clinical records of hospitalized patients.
Results: The frequency of tetanus in the hospital was 2.6% and the average admission was 10.2 cases per year. Of the 92 cases of tetanus reported, the mean age was 29.2 ± 18.8 years. The group age of 15-45 accounted for 62% of the patients. Farmers (36.5%), unemployed (28.5%) and informal sector workers (21.5%) were the most represented occupations. The patients were mostly unvaccinated against tetanus (97.8%). The main points of entry were integumentary (68%) and surgical (16.5%). Complications were mostly infectious (14%) and the lethality was 35.5%.
Conclusion: Tetanus is endemic in Burkina Faso and affects the active layer of the population. Sensitization of populations on the interest of anti-tetanus prophylaxis is essential.

Tetanus is a toxic-infection caused by a strictly anaerobic grampositive bacillus (Nicolaër bacillus ) which belongs to the telluric flora. It is common in the digestive tract of several animal species and persists in animal dung and soil in the form of highly resistant spores.

In developed countries, improvements of hygiene, socio-economic and health status, and above all, routine vaccination have made tetanus rare occurring only in the elderly [1,2]. In developing countries, particularly in Africa, tetanus is still a public health problem because of its frequency and its severity. In the last decade, efforts have been made in Africa to eradicate neonatal tetanus through appropriate vaccination policies for pregnant women and newborns [3]. At the end of 2005, 49 countries, including Burkina Faso, had not reached the goal of eliminating neonatal tetanus. However, in the last five years, the trend has been towards reducing the number of cases in Burkina Faso [4,5]. If the frequency of neonatal tetanus has dropped, what about other age groups? If National Immunization Program vaccine coverage is good at the country level, what about the immunization status of tetanus in children or adults? What is the profile of the people affected and what is the evolution of the disease? So many questions that led us to carry out this study in order to describe the socio-epidemiological, clinical and evolutionary profile of tetanus cases notified in the Department of Infectious Diseases at Yalgado Ouédraogo University Hospital Center (CHUYO) in Ouagadougou.

The study took place in the Department of Infectious Diseases at CHUYO in Ouagadougou. It is one of the three University Hospital Centers in Burkina Faso. It was a descriptive cross-sectional study of tetanus cases admitted in the service from January 2000 to June 2014. All cases diagnosed with tetanus during the study period were included, with an exploitable record.

The diagnosis of tetanus was made in front of the clinical symptomatology (trismus, attitude of opisthotonos, orthotonos, and spontaneous or provoked paroxysm with or without a point of entry). The Mollaret classification was used to assess the severity at admission or during hospitalization, and the Dakar score was used to evaluate the prognosis at admission. The data were collected from clinical records of hospitalized patients. Data entry and data analysis were carried out using Epi-info software version 6.04.

Of 385 patients admitted during the study period, we recorded 148 tetanus cases implying a frequency of 2.6%. The annual average admission of tetanus cases was 10.2 cases. Of these tetanus cases, 92 patients met the inclusion criteria of the study.

The distribution by years shows an increased in year 2000 (19 cases or 20.7%). Annual and monthly distributions of tetanus cases are presented in Figures 1 and 2. 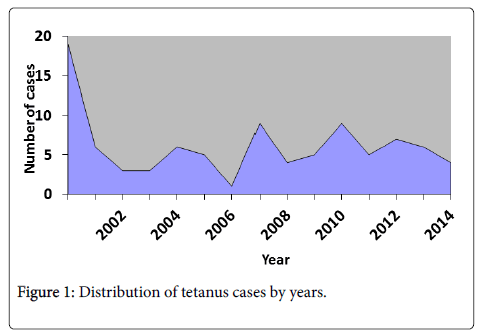 Table 1: Distribution of tetanus cases according to their epidemiological profile.

More than half of the patients (58.7%) were hospitalized for more than 7 days. Twenty-nine patients had complications (31.5%), and infections represented the most common complications in 14% of cases (mainly pulmonary diseases in 92.5% and bedsore in 7.5%); in addition, metabolic complications including ionic disorders and dehydration were present in 10% of the cases. In half of the cases (53.3%), the evolution was favorable and without sequelae. Two patients had sequelae which were stiffness of the lower limb and hand. Twenty patients died during hospitalization with a lethality of 35.5%. The evolutionary profile is presented in Table 3.

Table 3: Distribution of tetanus cases according to the evolutionary profile.

The flood that occurred in Ouagadougou on September 1st 2009 led to the loss of numerous patients’ files including tetanus at the Department of Infectious Diseases. In addition, some patients went out against and without medical agreement; it was therefore impossible to evaluate all the cases.

The frequency of tetanus in the hospital (2.6%) and the average annual admission (10.2 cases) found in the study are similar to other studies in Africa. Tanon in Côte d'Ivoire [6] and Dao in Mali [7], found in their study that the frequency of tetanus was respectively 3% and 5.9%. Okome in Gabon [8], found an average annual admission of 06 cases and Manga in Senegal in her study among reproductive age women found an average of 15 cases per year [9]. Other authors such as Aba [10] and Tanon [6] in Côte d'Ivoire found a higher annual average admission; it was respectively 44.2 and 133. Most of these authors performed their work during the period when maternal and neonatal tetanus were common, explaining the high frequencies of tetanus in their study. In our country, the positive impact of the national immunization policy for reproductive age women in the context of neonatal tetanus elimination could explain the low frequency as no neonatal cases happened since 2002. Also, most cases were male with a sex ratio to 4. Prevention programs should focus on men especially those with risky professions.

Over the years, there is no downward trend, but a saw tooth evolution of tetanus cases. Added to this, there is the constant monthly distribution of tetanus found in the study. These results show that tetanus is endemic in Burkina Faso. The same observation was made in Côte d'Ivoire [6]. The fact that the population lives in direct contact with animals, explains the persistence of the telluric bacteria in the immediate environment of the man, at domestic or professional level. In our study, about 62% of the cases was mostly young people aged 15 to 45, unvaccinated, male, farmers and informal sector workers. Dao in Mali [7] found 48.2% of peasants and workers; Okome-kouakou in Gabon, reported 44% of farmers [8]. The absence of tetanus prevention and the professional profile of patients increase the risk of tetanus occurrence; Informal workers (craftsmen) and farmers after wintering perform other activities such as gardening and handicrafts. They are then exposed all year because of micro trauma by sharp and soiled equipment and situations where people are not vaccinated; in fact 98% of the cases were not vaccinated in the study. They developed tetanus due to incomplete or absence of immunization. Soumaré [11,12] and Tanon [6] in Africa and Lombard [11] and Pedalino [13] in Europe also found a lack of tetanus immunization in their studies. In the context of the Expanded Program on Immunization (EPI), infant immunization is complete with good immunization coverage. However, boosters are not always done by mothers, and vaccine immunity is either lost or incomplete as the child grows [14]. In the study, about 20.7% were children under 15 and only two children had had a booster; this was even incomplete. In a study where 631 children aged 1 to 14 were surveyed, Kaba [14] found a post-EPI coverage of 11.6% mainly for meningitis in mass campaigns organized by the Ministry of Health; also the immunization coverage against tetanus was 0.3% in that study. Recalls are essential for the continuity of EPI vaccines, and parents should be aware of the necessity of their achievements.

A significant proportion of patients (32.5%) were referred from provinces out of Kadiogo to the department of infectious diseases. These provinces are often 100 km away, 200 km or more, from the city of Ouagadougou. Tetanus is a medical emergency and must be treated early in a quiet room with an absence of noise to not provoke paroxysms. However, the poor condition of the roads strewn with holes called "potholes" are responsible of many shocks; the shocks are likely to cause paroxysms that can lead to complications that are life threatening. It would be useful to refer patients to regional health centers, which are much closer to the population and have appropriate infrastructures and human resources trained in case management.

The integumentary point of entry was frequently found in 68% of the total cases. Most authors in Senegal [9], Togo [15], Mali [7] and Tunisia [16] found the same result except in India where Sunit [17] and Geeta [18] noted a predominance of the otogenic point of entry. The aetiologies of integumentary point of entry found in the study reflect the injuries associated with the daily activities of the patients. Tetanus onset is then a possibility as sores are often soiled and neglected without any anti-tetanus prophylaxis after a trauma.

There is a need to increase public awareness of tetanus risk after a trauma and the availability of effective immunization. It is therefore necessary to strengthen the awareness of the population not only on the importance of preventive vaccination but also on the importance of visiting a health center after the injury. For sensitization, available channels are media (radio, television), conduct health awareness sessions in the community, awareness in schools and information in leaflets. Mothers will also need to be aware of the importance of their children's tetanus vaccine booster. For this, physicians must promote the availability and the benefits of vaccines for adults.

The severity of tetanus was moderate or mild in most cases but severe tetanus cases were 24%. Our results are similar to the results of Tanon in Ivory Coast [6] and Soumaré in Senegal [12], who found a high frequency of mild tetanus. However, Wateba in Togo [15] found a predominance of severe tetanus.

More than half of the patients were hospitalised for more than 7 days; this is an economic loss for the country as most of the cases are farmers.

In our study, the lethality was 35.5%; some authors, such as Lombard [11] in France, Sunit in India [17] and Tanon in Côte d'Ivoire [6], found relatively lower lethalities of respectively 24%, 33.3%, 31.9%, and 31.0%. However, Okome-kouakou in Gabon [8] reported a higher lethality of 74%. In our context, the care precariousness such as the lack of intensive care unit, the conditions of isolation that are not always respected by the family, the transportation of patients from very long distances and the bad roads, could explain the high frequency of complications and the heavy lethality in our study. The complications and high lethality observed in the study can serve as a tool for raising awareness among the population to prevent the onset of tetanus. Health workers must also promote the use of vaccines to control vaccine-preventable diseases such as tetanus. The state of Burkina Faso should subsidize the tetanus vaccine to make it accessible to all Burkinabes. (A vaccine would cost 3500 FCFA which is 6 euros).

Tetanus remains relevant and is endemic in Burkina Faso. It is relatively infrequent in children, but handicaps the active and productive layer of the country. Awareness campaigns on the importance of tetanus vaccination, especially in high-risk professions through Medias and community health workers would be necessary to protect the population and avoid the heavy lethality noted in the study.

We thank all the medical and paramedical team of the department of infectious diseases of the hospital Yalgado Ouedraogo as well as all the patients who participated in the study.

Funding and Conflicts of Interest

The study did not receive funding. The authors agree to the publication of the article, and there is no conflict of interest.

Copyright: © 2018 Sonda KA, et al. This is an open-access article distributed under the terms of the Creative Commons Attribution License, which permits unrestricted use, distribution, and reproduction in any medium.