The Correlation between Neck Pain and Hand Grip Strength of Dentists

Copyright: © 2014 Fayez ES. This is an open-access article distributed under the terms of the Creative Commons Attribution License, which permits unrestricted use,distribution, and reproduction in any medium, provided the original author and source are credited.

Abstract Hand grip is the functional unit of dentists used in firm holding of instruments and tools .Muscles of hand grip supplied by cervical nerves. Dentists put their neck in high physical load for prolonged time that lead to neck pain. 54.4% of dentists in K.S.A. have neck pain and 21% drop out of their job. Objective: The main objective is to find the correlation between neck pain and hand grip in dentists of Saudi Arabia. Methodology: Subjects: 25 chronic neck pain dentists (suffering from neck pain more than 3 months) in both gender, will be selected non randomly. Their ages ranged from 25 to 40 years with normal BMI (18.5-25) will be divided into subgroups according to neck position during their work. Procedures: Pain intensity will be determined by visual analog scale (VAS), hand grip strength will be measured by Jamar hand dynamometer in kilogram (Kg) unit. Result: Among 25 dentists the result showed extremely significant correlation between neck pain and hand grip strength (direct proportional). The p value (0.0001). Discussion and conclusion: the direct proportional between neck pain and hand grip strength is due to sensory motor integration deficit or due to neuro hyper excitability.

Neck pain is an ache or discomfort in anatomical area between occiput and 3rd thoracic vertebra and laterally between middle margin of scapula [1]. Neck pain is considered to be chronic if the patient suffered more than 3 months [2,3]. The prevalence for neck pain varies between 16.7% and 75.1% in the general population [4]. Neck pain may be caused by; spondylosis, spinal stenosis, disc herniation, stress, poor posture, prolonged posture [5,6]. Symptoms of neck pain may include; neck soreness and headache, pain around shoulder blades, arm complaints (pain, numbness or weakness).

Dental profession is one of the occupational risk factors of neck pain [1,7]. Studies showed that neck pain starts early in dental career even during educational training [8,9]. In a recent study, 54.4% of dentists in K.S.A. had neck pain, 21.69% of them drop out of job [10].

Recently, it was shown that there is a strong relation between work duration and neck pain in the staff of dental school [11,12]. Another study reported that increasing weekly work hours has little effect on neck pain [10,13]. The most common cause of neck pain in dentists is prolonged work posture which makes high load on muscles of neck and shoulder region (trapezius more than splenius) [12]. The main working posture of dentist is in sitting, with neck flexion, shoulder elevation and upper extremity abduction and his patient supine [10,11,13,14].

Hand is the functional unit of the dentist and is used in keeping firm holding of instruments and tools [15]. Hand grip is the amount of static force that the hand can squeeze around dynamometer or an index of the power which the hand can exert [16,17]. Grip strength can be affected by gender (male>female), age(peaked at 4th decade), dominant more than non-dominant hand [16-20] .Different positions may also affect hand grip strength: elbow during measurement (extension>flexion90%), supported forearm more than unsupported and standing position more than sitting [15,21] .Grip strength used to assess functional activity of hand [22] . The measurement of hand grip strength used to detect whole upper arm strength [23]. Studies show that persons with unilateral upper limb chronic pain have strength reduction of hand grip 20-30% less than non-painful side. In addition to that, unilateral musculoskeletal pain cause delay grip initiation and relaxation [24,25].

The Purpose of the Study

The purposes of the present study were to

A cross-sectional design of 25 chronic neck pain dentists in both gender (13 male and 12 female) from dental clinic of university of Dammam and several private clinics.

Sixty two dentists were excluded because they had a history of either orthopedic or neurologic diseases causing functional defect of the hand strength like: fracture, surgery of upper limb or hand, carpal tunnel syndrome, De Qurvain's syndrome or diabetes mellitus.

None randomly convenient technique to reach the volume of 25 dentists in both genders. The sample was divided into sub groups according to the neck position during working.

Data collection sheet which include (personal data, main neck position during working). It was used for gathering data from dentists 1-Intensity of pain was determined by VAS rating from (0=no pain, 10=unbearable pain).

2-Grip strength was measured in the same position for all dentists : seated on chair with back support and armrest, shoulder adducted, elbow 90 degree flexed, forearm and wrist in mid position, hold the dynamometer by dominant hand (Figure 2). Therapist gave the command "squeeze around dynamometer as much as you can''. Therapist was stand in front of dentist to read the amount of force. We toke the mean of three measurements in Kg unit, with one minute rest between each squeeze to overcome fatigue [15, 16, 20]. 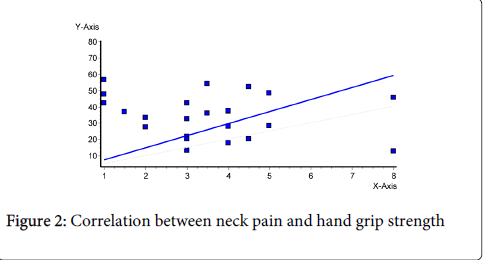 •Data was collected from the sheet and the result of assessmentandentered to SPSS program.

•Regression analysis to find the correlation between intensity of neck pain and strength of hand grip.

•One way ANOVA to compare the intensity of pain and grip strength in different neck position.

Among 25 dentists, the results of this study showed extremely significant correlation between neck pain and hand grip strength (direct proportional) with p-value (0.0001) and the slope is significantly different from zero as seen in Table 1 and Figure 1. The mean of grip strength is (33.42 ± 13.05) kg .The mean of pain intensity is (3.58 ± 1.88).

Table 2 and figure 2 showed that there was no significant difference between pain intensity in different neck positions during working of dentists by using one-way ANOVA with p-value (0.662), but neck rotation combined with flexion took the highest pain intensity (4.33 ± 3.3).

Table 3 and Figure 3 and 4 " showed that there was no significant difference between hand grip strength in different neck positions by using one –way ANOVA with p-value (0.196). Neck rotation also took highest hand grip strength (45.42 ± 8.67). 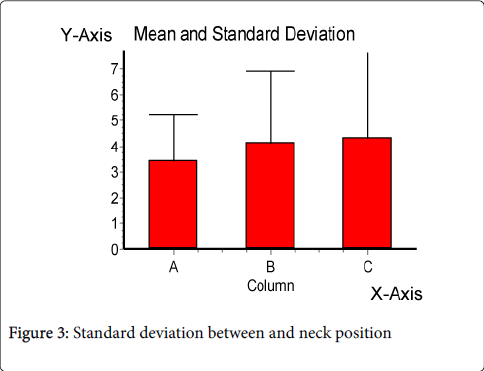 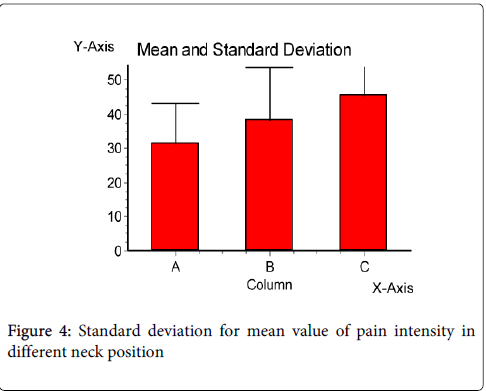 In this study we examined the relationship between neck pain intensity and the hand grip strength in dentists. The results of the present study revealed that there was a significant positive correlation between neck pain and hand grip strength. As increase in intensity of neck pain lead to increase grip strength .This findings may be attributed to abnormality of sensory motor integration found in neck pain lead to deficit in the quality of sensory information that generate motor output. Or, may be due to sensory hyper excitability. This result agreed with Maaike et al. [28]. They measured the grip strengthin neck pain subjects and control group while carrying a 300g weight connect to (Futek, LSB200) dynamometer which measured forces applied to the object . They found that subjects with neck pain used significantly higher grip forces as compared to subjects without pain .After the initial lift object, all subject groups adapted to the lifting task by lowering their grip force level but grip force levels were still significantly higher in the subjects with pain.

Our results disagree with Michael et al. [29] who found that the grip strength decrease significantly in patients with spondylosis compared with those control group in dominant and non-dominant hand.

They clarified that increased tissue pressure arising from degenerative changes compromises myoneural conduction velocity and tissue blood flow and oxygenation .These factors interfere with the ability of the nervous system to activate hand muscles.

The results of our study showed that most pain intensity was found in rotation combined with flexion position compared with flexion and side bending positions taken by dentists. These results may be due to strain on ipsilateral facet joint which increase the risk of facet joint injury found in neck rotation [30,31]. Other study demonstrated that at 20° and 40° of rotation of the head decrease the ipsilateral neuro foraminal size up to 15% and 23%, compared with the neutral position [32] While in neck flexion they found that increase in posterior tensile force on spinal canal and soft tissue structure [33].The combination of two movements make much load on the cervical structure which cause more pain.

It was concluded that there was a significant direct proportional correlation between neck pain and hand grip strength in dentists.

It was recommended that the same study have to be conducted on larger sample size, and on different degrees of neck positions.

I would like to acknowledge Anwar Adnan M al mousa, FatimahAlwi M Al sadah, Toka Al Awazim, Noor Haddad, Noor Hassan Albrahim , Nawal Al shemary. For their great help during this research project. We also want to thank dentists how participant in our project and help us to collect data.