Copyright: © 2013 Singh G, et al. This is an open-access article distributed under the terms of the Creative Commons Attribution License, which permits unrestricted use, distribution, and reproduction in any medium, provided the original author and source are credited.

The aim of this work was to evaluate the corrosion behavior of the uncoated and coated titanium (Ti) and study the effect of calcium phosphate (CaP) on corrosion behavior of hydroxyapatite (HA) coatings in simulated body fluid (Ringer’s solution). Three types of coatings: HA, HA + 10 wt% CaP, and HA + 20 wt% CaP on titanium were made using plasma-spraying technique. Structural characterization techniques including X-ray diffraction and scanning electron microscopy/energy dispersive X-ray spectroscopy were used to investigate the crystallinity, microstructure and morphology and of the coatings. Electrochemical potentiodynamic test were performed to determine the corrosion resistance of uncoated and all three coatings in Ringer’s solution. The corrosion resistance of plasma sprayed HA coating on titanium was found maximum.

Implant material used for high load bearing bones such as femoral and tibia bones should possess good bone bonding ability and high fracture toughness [1,2]. But the available bio-ceramics and biocompatible metals neither fulfill the both requirements. The ceramics has low fracture toughness than human cortical bone and no metal has the ability to directly bond with living bone [3]. So coating of bioactive materials such as hydroxyapatite [(Ca10(PO4)6(OH)2), HA] and calcium phosphate [Ca3(PO4)2, CaP] on the metals like titanium and biological steel was proposed as the well-known technique to enhance the bone-bonding ability of metals [4,5]. Furlong and Osborn [6] who were the first to perform the clinical trials of HA-coated implants had reported that HA coatings can successfully enhance clinical success. Delecrin et al. [7] had reported that Calcium phosphate (CaP) coatings promote early bone apposition at the surface of cementless orthopedic prostheses and had given well successful clinical results [8-14].

Titanium (Ti) is commonly used for developing orthopedic and dental implant under load bearing applications. But the high stiffness of titanium in comparison of surrounding bone can leads to the problem of stress shielding and subsequent loosening at the bone– implant interface [15]. In the last many years, continuous research on HA and CaP have not only focused on tissue-coating interface, but also on the problems associated with the coating process and optimization of coating properties for maximum tissue response [16].

In this work, Atmospheric Plasma Spray technique was employed to spray HA - CaP coatings on Titanium substrate. The as-sprayed coatings were characterized by X-ray diffraction (XRD), scanning electron microscopy (SEM) and energy-dispersive X-ray spectroscopy (EDX) techniques. Subsequently corrosion behavior of plasma sprayed HA and HA - CaP coatings on titanium has been investigated by the Tafel extrapolation method in simulated body fluid (Ringer’s solution). The changes in the crystallinity and morphology if any of the exposed samples were analyzed by XRD, SEM and EDX. This study is focused on the effects of adding CaP in HA on the corrosion resistance of HA - CaP coatings.

Medical grade HA and CaP powders (IFGL Bio Ceramics Limited, Kolkata, India) with particle size distribution of 57-200 μm and 90-300 μm respectively were used as spraying materials. Titanium substrate of size 15 × 15 × 3 mm was plasma sprayed with HA and HA – CaP coatings. The substrate surface was grit blasted with alumina of particle size 50-60 μm at a pressure of 5 bars for 2 minutes to roughen the surface and subsequently air blasted to remove any residual grit before spraying. Because a highly roughened substrate surface exhibited higher bond strength as compared to a smooth substrate surface [52].

The mixture of HA and CaP powders were prepared by mechanically stirring the mixture of HA + 10 wt% CaP and HA + 20 wt% CaP powders in a ceramic pot for 30 min. The titanium substrates were coated with following powders compositions: HA, HA + 10 wt% CaP and HA + 20 wt% CaP using Plasma spray (Miller Spray System) at Anod Plasma, Kanpur, India. Hydrogen and argon were used as the fuel and powder carrier gas respectively. The spraying parameters for all the coating are identical and are listed in Table 1.

Microstructural investigation was carried out on the surfaces and polished cross-sections of the coatings by SEM (EVO MA 15 ZEISS) coupled with EDX. As-sprayed coatings were cut with a low speed precision saw and mounted in hot resin using a hot mounting press, followed by polishing with emery papers of 220, 320, 400, 600, 800, 1000, and 2000 grades, and finally mirror finished by buffing using an alumina slurry solution on napped cloth. To achieve the desired conductivity for observation in SEM the gold sputter coating were applied to samples using JEOL JFC-1600 auto fine coater. Elemental analysis of the coatings was carried out using an EDX. EDX analysis was used to calculate Ca/P ratio and to display the distribution of elements in the coatings.

Roughness parameters such as Ra (the arithmetic mean of the departures of the roughness profile from the mean line), Rq (root mean square (RMS) of average roughness), and Rz (average of the highest peaks and the lowest valleys) are measured at five different positions on the surface of the uncoated, HA, HA +10 wt% CaP and HA + 20 wt% CaP coated titanium specimen by using a roughness tester (SJ-201 MITUTOYO), with a filter of Gaussian type for a cut-off wavelength of 0.8 mm. The average value of each parameter at various positions is reported in this work.

The electrochemical corrosion behavior of the uncoated, HA, HA + 10 wt% CaP and HA + 20 wt% CaP coated titanium specimens were investigated by conducting the potentiodynamic polarization tests. Potentiostat/Galvanostat (Series G-750; Gamry Instruments, Inc. USA), interfaced with a personal computer having specific Gamry electrochemical software ‘DC105’ was used to conduct the test. Ringer’s solution (Nice Chemical Pvt. Ltd. Cochin, India) with chemical composition (in g/L) as 9 NaCl, 0.24 CaCl2, 0.43 KCl, and 0.2 NaHCO3 at pH 7.2 was used as the electrolyte for simulating human body fluid conditions. The titanium specimen and saturated calomel electrode (SCE) were used as working electrode and reference electrode respectively. A graphite rod was used as the counter electrode. The instrument measures and controls the potential difference between a non-current carrying reference electrode and one of the two current carrying electrodes (the working electrode). The parameters for conducting the potentiodynamic scan for calculating the corrosion rate by plotting the Tafel plot are mentioned in Table 2. The initial delay of 24 hour is given for the stabilization of immersed specimen in Ringer’s solution and fresh solution was used for each experiment.

Surface analysis: The morphology of HA and CaP powders (Figure 3) confirm that the HA powder has the spherical shape and CaP powder has the irregular shape with sharp edges. SEM micrograph of plasma spray HA coating (Figure 4 (a)) shows the microstructure consist of fully molten HA particles and appear denser. The EDX analysis shows the presence of Ca, P and O, which are main components of HA powder at three different positions. The average value of Ca/P ratio of the coating is 1.7 which lies in between the guidelines described by the Food and Drug Administarion and in the ISO standards [16,53,54]. The SEM micrograph of HA + 10 wt% CaP coating surfaces (Figure 4 (b)) shows that microstructure consist of pores / voids and unsmooth. As the quantity of irregular shape particles of CaP increases in HA + 20 wt% CaP coating increases the smoothness decreases and pores / voids appear as shown in Figure 4 (c). It is generally believed that if the density of coating surface is higher than the corrosion resistance of the surface increase.

Cross-Sectional analysis: The morphology of the plasma sprayed HA, HA + 10 wt% CaP and HA + 20 wt% CaP coatings on titanium at the cross-section is investigated by SEM and EDX and is shown in Figure 5. The thickness of coatings was measured at four positions and100 ± 20 μm was the average thickness. All the coating shows good bond with the substrate. The EDX analysis showed peaks of calcium and phosphors increases as the content of CaP in HA increased. The increase in proportion of CaP promotes the osteoconduction while HA particles carry the biological apatite precipitation [55]. It has been reported in literature that high soluble coating are more osteoconductive and bioactive in comparison to the stable layers in vivo [56]. The osteointegration of CaP coatings is faster than HA coatings in non – load bearing conditions [7].

Surface roughness, surface topography, surface energy and chemical composition have been reported as very important factors for implant tissue interaction and to affect the biocompatibility in clinical use [57,58]. High surface roughness will increase the coating and body-fluid interface, and thus increase the dissolution rate and apatite precipitation [16]. 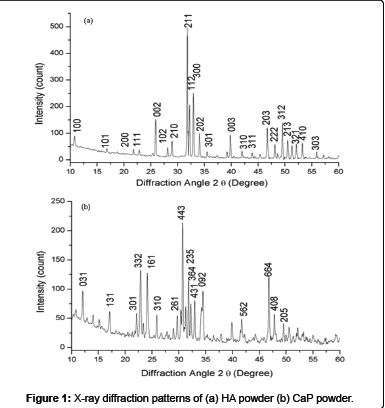 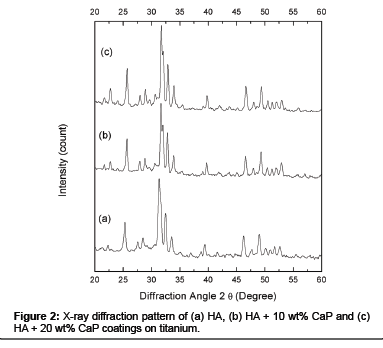 Figure 3: SEM micrograph of (a) HA powder (b) CaP powder. The results of these corrosion parameters are shown in Table 3. The chance of corrosion in a material depends upon the corrosion current density (ICorr) at a given potential, material will be more corrosion resistant at lower value of ICorr [60-62]. 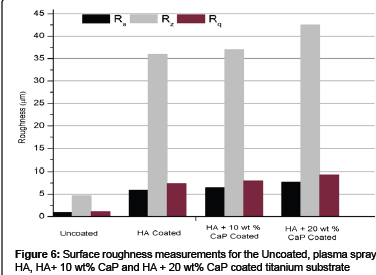 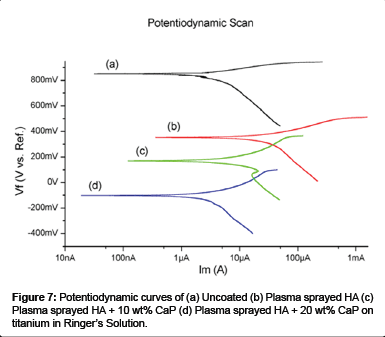 The XRD peaks of HA, HA + 10 wt% CaP and HA + 20 wt% CaP coated titanium (Figure 8) appears more crystalline after electrochemical corrosion testing and the intensity of XRD peaks found to be increased after immersion of samples in Ringer’s solution for 24 hours during corrosion testing. The sharp peaks after immersion indicates the dissolution of the amorphous phases [63]. It is reported that amorphous phases are more soluble then crystalline HA as they encourage the early bone growth [67]. The dissolution was favorable for the early stages of transformation of biological equivalents that act as mediator between osteoclast and osteoblast differentiation [68]. The higher crystalline coating leads to longer implant life, while some implant manufacture prefer a faster dissolving coating to enhance the bone growth [69]. It has been reported in in vivo studies that the phase purity, crystallinity and microstructure of HA coatings affects the biological response of HA coating [70].

After electrochemical corrosion testing, the compositional changes, if any, on the surfaces of the exposed specimens were further examined by SEM and EDX. The surface morphology of the HA coated samples (Figure 9 (a)) changes to flattened particles and looks smooth and denser after exposure to the corrosion testing in Ringer’s solution.

The morphology of HA - CaP coatings (Figure 9 (b-c)) appears to be more porous and less smooth after 24 hour immersion in Ringer’s solution for corrosion testing. The size of pores and void appear to be increased. The micrograph of HA + 20 wt% CaP coating shows the dissolution of the coating. No cracks were found on both the Ha and HA - CaP coated exposed specimens.

EDX analysis confirms the presence of Ca, P and O elements in all HA and HA - CaP coatings. EDX analyses of exposed specimens shows that Ca and P (at %) decreases by taking the average of elemental composition at three spectrums after 24 hour immersion in ringer solution. The decrease in the values indicates that phosphate accumulate on the surface which suggests that incongruent dissolution of the HA has taken place [63]. No constituent of substrate i.e. titanium found on the surface of any coatings of the exposed samples.

In the present study, plasma spray technique was used to deposit the HA, HA + 10 wt% CaP and HA + 20 wt% CaP on titanium. The following conclusions have been drawn from the study: 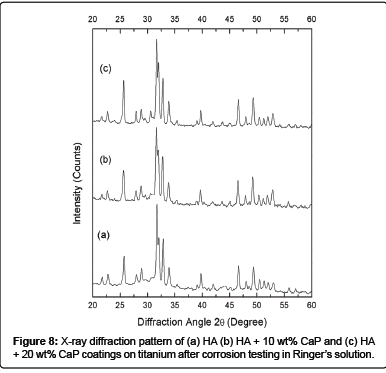 3. The electrochemical study showed the corrosion resistance of the titanium is more after the deposition of plasma sprayed HA than uncoated, HA, HA + 10 wt% CaP and HA + 20 wt% CaP coatings on titanium.

Future in vivo studies of plasma sprayed HA, HA + 10 wt% CaP and HA + 20 wt% CaP coated titanium and a complete interpretation of these results can help in assessing their use in clinical applications.