Objectives: The purpose of this study is to evaluate the effects of some drinks on saliva pH.
Methods: Systemic and periodontally healthy individuals aged 18-23 years were included in the study. Individuals saliva pHs were measured three hours after breakfast. Three groups were set up to measure after 1 minute, 10 minutes and 30 minutes after drinks were drunk and the effects of Turkish coffee, cola, ayran and green tea on saliva pH were investigated.
Results: The most pronounced pH changes occurred in the first group. The lowest pH values were reached when cola was consumed while the highest pH values were reached when green tea was consumed. Within the pH measurement time period, the drink group with the least tendency of pH value change was green tea.
Conclusion: In order to prevent tooth decay, there is a need to raise awareness about conscious and controlled consumption of beverages that may lead to significant reductions in salivary pH.

Several recent reports have presented concerns with the levels of caries that have been identified in populations in diverse parts of the World [1]. Although largely preventable, dental caries and periodontal disease are the two biggest threats to oral health [1-5].

Tooth decay; is a chronic disease that started a long time before it became clinically visible in the mouth. For this reason, it is of utmost importance that the individuals with high risk of decay are identified in advance and taken the necessary precautions [1-3,6].

Saliva plays a critical role in the maintenance of oral health. Saliva is one of the most important factors in the defensive mechanism of the mouth. In a healthy mouth, saliva contains antimicrobial enzymes, glycoproteins and basic electrolytes and protects the oral mucosa. Saliva is important for digestion, taste and bolus formation, protection of the teeth and antimicrobial effect [5,6].

For the continuation of the oral and dental health, the importance of saliva and its components is well known. Organic and inorganic components, the buffering capacity, pH, viscosity and quantity of the saliva are very important to assess the caries risk [2,5].

Saliva plays a fundamental role in maintaining the physicalchemical integrity of tooth enamel by modulating remineralization and demineralization [6].

The present studies attempt to evaluate the interaction between salivary pH and flow and changing pH of plaque [4,7-9].

While Streptococcus mutans and Streptococcus sobrinus are effective in the formation of tooth decay, lactobacilli are regarded as responsible at the first level in the caries progression. These bacteria are special bacteria that can survive in the acidic environment [6,7].

The human mouth is quite frequently exposed to components whose pH differs from saliva’s normal pH (6.5-7.5). These components may cause damage to teeth or mucosal surface [8]. One of the most important factors in the formation of tooth decay is the diet. Although many foods have cariogenic properties, there are also foods with anticaronogenic properties and it is therefore important to these foods in the diet [9]. In the literatüre, there are studies investigating the effects of diet content on saliva pH and tooth decay [7-9].

Roasted coffee has antibacterial activity against S. mutans and many Gram positive and Gram negative bacteria. Coffea arabica and Coffea canephora extracts inhibit the adhesion of this pathogen to the surface of saliva-coated hydroxyapatite. The components with the highest antiadhesive activity in the coffee content are trigonelline, caffeine and chlorogenic acid [10].

The role of probiotics, defined as living microorganisms that affect host health positively when taken in sufficient quantities by the World Health Organization, to improve human health has been the subject of research since the beginning of the century. Probiotic microorganisms within this group, which are located in the seaweed, are effective in the prevention and treatment of various diseases by regulating general and local immunity, producing antimicrobial substances, competing with pathogenic microorganisms for adhesion zones [11].

To ensure oral hygiene, plants have been used for a very long time. Plant extracts, in addition to the presence of different caries inhibiting activities, mainly play a role in the prevention of the caries process due to the anticryogenic effects brought about by the polyphenols in their contents. It is known that green tea and its polyphenols play an active role in regulating oral health. In studies conducted, these polyphenols found in the content of green tea were reported that showed bactericidal activity against S. mutans , S. sobrinus and lactobacillus. However, there is a limited number of studies showing that regular green tea consumption reduces tooth decay [12].

The aim of this study is to examine the effects of Turkish coffee, cola, ayran and green tea consumed widely in Turkish society on the saliva pH and to evaluate it in terms of dental health.

The experiments were carried out on 28 volunteers (17 females, 11 males) aged 18-23 years, who fulfilled inclusion criteria and were able to give informed consent. To be included, volunteers had to be nonsmokers and have no significant oral, dental or systemic disease; not taking any medication likely to interfere with salivation.

To determine oral health status, participants were examined, and carious teeth and filled teeth were recorded and performing dental treatments of individuals were given oral hygiene training.

Stimulated whole saliva was collected under resting conditions in a quiet room (to reduce any stressful conditions). The saliva samples were obtained three hours after breakfast, between 11–12 a.m. Three hours prior to the evaluation of whole saliva production, subjects were instructed not to eat, drink, chew gum, or rinse their mouths until the test was completed.

Pre-stimulation was accomplished by chewing a piece of standard size paraffin, and the participants were asked to swallow the saliva pooled in the mouth after 60s. Thereafter, whole stimulated saliva was collected for about 1 min into a dry, millimetric and sterilised plastic tube.

For statistical analysis the means and standard deviations were calculated for the saliva pH values and were then compared by ANOVA.

The mean saliva pH values and standard deviations of all groups and the results of the ANOVA test are presented in Tables 1 and 2. Mean unstimulated salivary pH was 6.76 ± 0.03. Following a paraffin chewing on standard size, the stimulated salivary pH value was found to be 6.81 ± 0.04 (Table 1). The stimulation of the saliva flow leads to an increase in the saliva pH value, which is limited and at a very small level. The lowest pH value was measured at 1 minute after drinking the cola (6.02 ± 0.17). In the cola group, the saliva pH reached unstimulated saliva pH at 30 min. The highest pH value in the first minute groups was reached in the green tea group (7.04 ± 0.12). In the Turkish coffee group, pH values of 6.94 ± 0.13 at the 1st minute, 7.40 ± 0.18 at the 10 th minute and 7.10 ± 0.23 at the 30 th minute were obtained. The pH value obtained in the tenth minute is remarkable.

* Groups with the same superscript letter are significantly different by ANOVA.

Table 2: The mean saliva pH values of all groups.

A linear increase in pH was observed in both the ayran and green tea groups when all test time periods were considered (Figure 1). 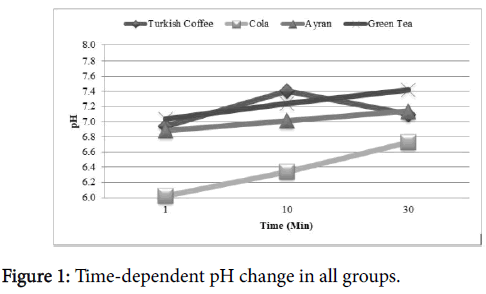 Saliva performs a range of functions within the oral cavity, including food lubrication and oral hygiene [2,3].

One important role of saliva is concerned with the maintenance and protection of the tooth hard tissues by providing a source of calcium and phosphate ions [3]. The main factors controlling the stability of enamel hydroxyapatite are the active concentrations free of calcium, phosphate, and fluoride in solution and the salivary pH [6].

Changes in the enamel surface could be observed, as well as decreases in hardness due to the acidic environment within the mouth. Because of a low pH at the enamel surface leads to mineral loss [2,3,6]. Normal salivary pH is from 6 to 7 [3-5]. Following a sucrose rinse the plaque pH is reduced from approximately 6.7 to less than 5.0 within a few minutes. Demineralisation of the enamel takes place below the critical pH of about 5.5. Plaque pH stays below the critical pH for approximately 15-20 minutes and does not return to normal until about 40 minutes after the ingestion of the sucrose rinse [4,13].

Researchers have reported that the increase in plaque pH during and after chewing was most probably due to an increase in salivary flow, and possibly also to the presence of minute particles of cheese embedded in the plaque surface, forming a potential reservoir of calcium and phosphate ions [14].

Among the factors that cause tooth decay, diet has an important place. Carbohydrates such as sucrose, glucose in the diet are fermented by microorganisms, especially S. mutans , to lactic acid and other organic acids, resulting in decalcification and tooth decay [13,14].

For these reasons, it is important that the anti-caries food is included in the diet for the prevention of tooth decay.

Prevention of pH decrease in the vicinity of teeth enamel and blocking bacterial adhesion may be additional mechanisms explaining the anti-cariogenic properties of tea [9,15]. Kato et al. in their study tested the effect of green tea on dentin wear by erosive/abrasive processes and they have reported that the green tea reduced significantly dentin wear under erosive/abrasive conditions [15]. Clinical studies have found carbonated drinks, especially carbonated cola drinks, to be associated with erosion, most likely due to their low pH. Previously conducted research shows that the erosive potential of soft drinks within the first minutes of exposure is solely dependent on the pH of the drinks [13,16,17].

Changes in salivary pH are important for dental health. The majority of the studies dealing with salivary pH and food intake are carried out in relation to bacterial plaque and caries development [13-17].

Therefore, we aimed to evaluate the effects of some drinks on saliva pH in this study. We observed the maximum pH drop after 1 minute from drinking cola (6.02 ± 0.17). Maximum pH decrease after intake of different beverages is an important consideration in dental erosion, as apatite dissolution increases in the lower pH range [16].

In this study, a linear increase in pH was observed in both the ayran and green tea groups when all test time periods were considered.

As a result of, in order to prevent tooth decay, there is a need to raise awareness about conscious and controlled consumption of beverages that may lead to significant reductions in saliva pH.

Dental caries continues to be a major health concern for populations worldwide with disparities related to well known issues of socioeconomics, immigration, lack of preventive efforts and dietary changes. New and renewed efforts must be marshalled together to focus on combating serious emerging increases in dental caries.