Copyright: © 2016 Szparecki G, et al. This is an open-access article distributed under the terms of the Creative Commons Attribution License, which permits unrestricted use, distribution, and reproduction in any medium, provided the original author and source are credited.

Hepatocellular carcinoma (HCC) is one of the leading causes of death resulting from neoplasms worldwide. Its risk factors include liver cirrhosis and viral infections (chiefly hepatitis B and C virus). Recently novel factors associated with poor prognosis has been identified, which are deemed to result from the presence of cancer stem cells (CSCs) - the identification of EpCAM(+), CK19(+) and NCAM(+) cells within the tumour makes the prognosis worse. Fibrolamellar type of HCC (FL) is characterised by longer survival and independence from risk factors typical of HCC. In the present study we investigate differences between classical hepatocellular carcinoma and fibrolamellar hepatocellular carcinoma in terms of stem cell markers expression: EpCAM, CK19, cKIT and NCAM. In samples of FL HCC and other variants of the tumour the immunohistochemical analysis was performed. The immunoreactivity of FL HCC cells was significantly lower as far as a percentage of positive stained cells and a fraction of cases, where at least 5% of cells was positive is concerned when compared with typical HCC. The results indicate that one of the factors influencing better outcome in patients with FL, as opposed to typical HCC, might be the less numerous population of CSCs, as identified by their EpCAM(+) immunostaining.

Neoplasms of the liver constitute a significant diagnostic, therapeutic and epidemiological problem. The increase in a number of imaging examinations, including ultrasonography caused a better detection of liver neoplasms, including hepatocellular carcinoma (HCC). However the newest epidemiological data is not optimistic. In the last decade the mean age at diagnosis decreased, whereas the number of deaths increases - as far as mortality is concerned, HCC is placed on the sixth position globally [1]. In terms of incidence it is the third most frequent cancer [1] - this rate depends strongly on continent and age of the patient. HCC is most widely spread in sub- Saharan Africa and Far East. In contrast, Europe and North America are believed to be low-risk regions [2]. The regional differences of incidence are a result of uneven distribution of risk factors [3]. The main risk factors are: liver cirrhosis, viral infections (chiefly hepatitis B and C virus), alcoholism, aflatoxin B, hemochromatosis, α1- antitripsine deficiency, non-alcoholic liver steatosis [2]. As far as morphological structure is concerned, three types of HCC are distinguished: massive, dispersed and the most frequent type, nodular. Histologic structure is the basis of distinguishing many variants, e.g. trabecular, pseudoglandular or fibrolamellar (FL). The latter is not linked to cirrhosis or viral infections. This variant was first described by Edmondson in 1956 and constitutes 8% of all cases.

Classical (i.e., not fibrolamellar) variant of HCC resembles normal hepatocyte and its immunophenotype is as follows: HepPar+, CK8+, CK18+, CK20-, CK19-. The last marker is characteristic for neoplasms originating in bile ducts and is best used in distinguishing HCC from cholangiocarcinoma. However in some cases a mixed variant of HCC may evince CK19 in its cells. It portends bad prognosis - these cancers tend to metastase and infiltrate portal vein more often [4].

HCC cells may lose their initial phenotype and obtain features of other tissues. It is postulated that such outcome results from carcinogenesis occurring in immature hepatocytes that may lose or retain the basic immunophenotype of liver cell. The other possibility is that cancer cell may develop from stem or progenitor liver cells. In such situation some tumour cells retain phenotype of the stem cell (EpCAM+, cKIT+, NCAM+) or of the bile duct epithelial cell (CK19+, CK7+) [5].

EpCAM (Epithelial cell adhesion molecule), apart from its adhesive features is also a component of Wnt/β-catenin signalling pathway. It has been proven, that in HCC EpCAM-positive cells are tumour initiating cells [6]. Their presence in the tumour is associated with poorer prognosis, portal vein infiltration, metastases and increased chemoresistance [7]. Nonetheless, it has been also suggested as a possible therapeutic target. In contrast to this protein, the presence of c-Kit expression in HCC cells has been associated with better outcome in terms of survival length [8]. The meaning of CD56, also called NCAM (Neural cell adhesion molecule) in HCC is similar: the soluble fraction released into blood serum from the tumour mass is considered to be associated with intrahepatic metastases when >1000 ng/ml in blood serum [9]. It has been found that soluble fraction might be a marker of hepatic encephalopathy in patient with HCC and liver cirrhosis as well [10].

Cells with the phenotype (EpCAM+, cKIT+, NCAM+) are considered to be cancer stem cells (CSCs) [11].This assumption is based on their common expression in combined hepatocellularcholangiocarcinoma. The presence of both components in this type of tumour (of hepatic and bile duct origin) suggests that its point of origin is a stem cell not yet differentiated into hepatocyte nor bile duct epithelium or a dedifferentiated cell of one of these tissues. These cells constitute a subpopulation of the cancer cells responsible for both selfrenewal and production of new tumour cells, which lack the stem cell phenotype and are the main tumour mass. This asymmetrical cell division is a basis of, on the one hand, self-renewal of CSCs population and of, on the other hand, constant growth of tumour mass [12]. Cancer stem cells, though generally they constitute a minority of tumour mass, are the main cells responsible for the distant metastases, infiltration and resistance to radio- and chemotherapy. Even if majority of tumour cells is eliminated after neoadjuvant or adjuvant treatment, CSCs remain and are the basis for recurrence [13].

In the present study we attempted to determine if there exist any differences between the expression of EPCAM, NCAM, cKIT and CK19 in typical and fibrolamellar HCC tissue sections using immunohistochemistry staining. We analysed the percentage of positive cells as well as the number of cases with at least 5% positive cells in each group.

Tissue specimens used in the study were fixed in 4% formalin solution and embedded in paraffin according to routine procedure. Paraffin blocks were taken from patients who were hospitalised and operated on in the Department of General Surgery and Liver Transplantation Medical University of Warsaw, and diagnosed in the Department of Pathology Medical University of Warsaw in years 2002-2012 and were subject to diagnostic tests. Eligibility criteria of the study group included: young adults under 40 years of age with hepatocellular carcinoma diagnosed histopathologically. The group of young adults included 37 patients. Of these 9 were diagnosed with fibrolamellar variant of HCC (mean age 25,3, span 18-34 year, 3 males, 7 females), 28 with classical HCC (mean 30,1, span 22-40 year, 14 males, 13 females).

The immunohistochemistry reaction was performed in the following way: routinely deparaffinised specimens were treated with 3% hydrogen peroxide to block an endogenous peroxidase and 5% donkey plasma (Jackson Immunoresearch, USA) and subsequently applied to solutions of primary antibodies, incubated in a humid chamber over night at 4°C. A kit of primary antibodies conjugated with peroxidase ImmPress Reagent Kit Anti-Mouse/Rabbit Ig (Vector Laboratories, USA) was used to detect the primary antibodies. 3-3' diaminobenzidine (Dako, Denmark) was used as a chromogen. Subsequently the specimens were stained with haematoxylin, dehydrated and closed.

The specimens were analysed under light microscopy, where the percentage of positive cells were calculated in 10 HPF.

Since the data for immunostaining did not follow a normal distribution, as checked with Liliefors test, U Mann-Whitney test was used for comparison between classical HCC and fibrolamellar variant in terms of positive immunostaining percentage. 2 × 2 contingency tables and Fisher’s exact test were used to compare the number of cases with at least 5% positive cells in both groups. p levels < 0.05 were deemed statistically significant.

The clinical data and the results of immunohistochemical staining were collected (Table 1).

Table 1: The clinical data and the results of immunohistochemical staining of all cases enrolled in the study.

The statistical analysis of immunohistochemistry reaction, taking into account the fraction of positive-stained cells showed a significant difference between FL variant of the HCC and the classical HCC as far as the fraction of EpCAM(+) cells is concerned (Z=2,11; p=0.03) (Figure 1). 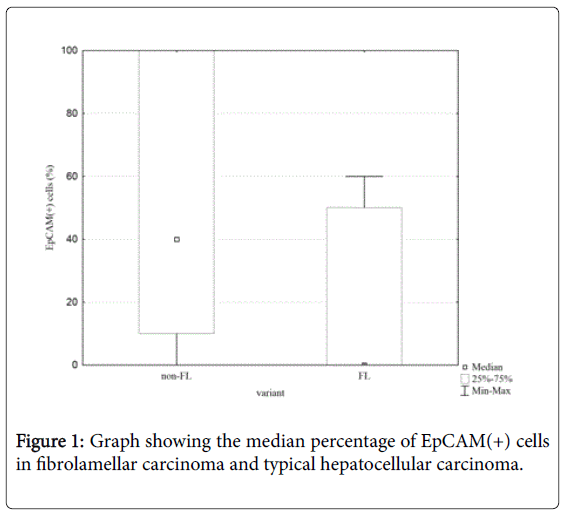 In our study we found that the expression of EpCAM is significantly higher in classical variant of HCC than in FL. This difference was visible both as far as number of cases with at least 5% EpCAM(+) cells is concerned and when taking into account the percentage of positive cells in both groups globally. Although the differences between these groups were not statistically significant in terms of expression of other proteins analysed in the study, all three markers were present in higher percentage of non-FL HCC cases. Taking into account that these stains (EpCAM, cKIT, NCAM) are used to identify CSCs, we postulate that FL variant might be characterised as possessing this population to a lesser degree than other HCC variants. This finding is consistent with observation that CSCs seem to be responsible for rapid growth, worse prognosis and chemoresistance - all features of non-FL HCC rather than FL.

Furthermore, the presence of EpCAM, cKIT and NCAM either in blood serum as identified by laboratory tests or in the cytoplasm as detected by immunohistochemistry is considered to portend poorer prognosis. CSCs might constitute the link between laboratory and pathological findings in terms of protein expression and clinical outcome. These cells, supposed to be a source of metastatic cells and a reservoir for focal tumour recurrence after treatment, might be responsible for lower survival rates of the patients through their biological properties: ability for self-renewal, a tendency for epithelialmesenchymal transformation (EMT), longer cell cycle[12,14] and the presence of proteins responsible for chemoresistance (ABC transporters, ALDH [13]).

The lower expression of EpCAM in FL shown in our study is consistent with clinical analysis of outcome of various HCC variants, in which it was found that FL variant is associated with higher overall survival than other variants of this tumour [15]. It might be supposed that the better prognosis for FL variant is a result of the lower EpCAM expression (which is considered to be associated with longer survival), which in turn is a marker of less numerous CSCs population in this variant of HCC.

Coming into conclusion, in our opinion the lower percentage of EpCAM(+) cells in FL and lower EpCAM expression as compared with non-FL HCC reflects the less numerous population of CSCs in this variant that constitutes a mechanism and provides an explanation for better overall survival observed in this type of tumour. To support our hypothesis it should be noted that all three factors mentioned above (FL variant, lack of EpCAM[+] cells and lower percentage of CSC in the tumour) predict better outcome.