Background: SPARC (secreted protein acidic and rich in cysteine) is a key player in the stromal remodeling associated with invasive carcinomas, and its detection by immunohistochemistry may prove diagnostically useful in detecting invasion. The present study explores stromal SPARC expression patterns in invasive mucocutaneous squamous cell carcinoma (SCC). The patterns are then compared to those of SMA, a relatively well-studied but imperfect marker of cancer-associated stroma.

Methods: Nineteen cases of infiltrating keratinizing SCCs from skin and mucous membranes were assessed semi-quantitatively for immunoreactivity with anti-SMA or anti-SPARC antibodies in tumor-free and tumor-associated stroma.

Results: All cases of invasive SCCs (n=19) demonstrated stromal expression of both SMA and SPARC. However, SPARC showed more diffuse reactivity than SMA, with SPARC demonstrating a mean percentage reactivity range of 50-75%, versus 25-50% for SMA. In tumor-free stroma, SMA was negative in all cases, whereas SPARC was positive in up to 5% of dendritic stromal cells in more than half of the cases.

Conclusions: Stromal SPARC overexpression is a consistent finding in invasive SCC, and SPARC is more sensitive but less specific for cancer-associated stroma than SMA. While H&E examination remains the gold standard for determining whether invasion is present, stromal SPARC expression patterns may serve as an adjunct to the histopathologic impression.

The stromal microenvironment associated with invasive carcinoma is distinct from that of benign conditions, characterized by increased expression of growth factors and matrix-remodeling enzymes. Among these, SPARC (secreted protein acidic and rich in cysteine; also osteonectin, BM-40) has emerged as a key player in the remodeling of the extracellular matrix (ECM) associated with cancer invasion. Originally termed osteonectin after it was isolated as the major noncollagenous component of bone [1], to date it has been ascribed numerous and diverse functions related to ECM remodeling both in developing embryonic tissues as well as adult tissues undergoing remodeling, such as healing wounds [2]. In healing wounds and in tissues subjected to various forms of stress, SPARC expression is enhanced by fibroblasts and macrophages [2-4]. It exerts its effects both directly, by binding to collagen fibrils to affect their assembly [5], and indirectly, by regulating activity of matrix metalloproteinases [6] and by modulating growth factor signaling by cell surface receptors [7].

Although the molecular biology of SPARC is unraveling, its precise role in the desmoplasia of invasive cancer remains largely elusive.

Depending on the type of cancer, SPARC expression has been associated with both tumor progression and suppression. The distribution of SPARC expression also varies among cancer types, with some displaying increased expression by the neoplastic cells, and with others showing increased expression only in the surrounding stroma [8]. The latter expression pattern has been demonstrated in cancers of the breast [9,10], pancreas [11], and colorectum [12-14]. In two of these reports [10,11], SPARC expression was found to mirror smooth muscle actin (SMA) expression. SMA is a marker of cancer-activated fibroblasts [15], and numerous studies have characterized its stromal expression as a constant feature of invasive squamous cell carcinomas of the skin [16,17], cervix [18], and upper aerodigestive tract [17,19,20]; invasive ductal carcinoma of the breast [10]; and in invasive adenocarcinoma of the pancreas [21] and colon [22]. Reports20 characterizing SMA expression in in-situ and invasive squamous cell carcinoma of mucocutaneous sites have demonstrated limited sensitivity and specificity, with not all cases of invasive SCC demonstrating increased stromal SMA expression, and with some cases of uninvolved stroma demonstrating SMA expression. These limitations render SMA an imperfect marker for distinguishing tumorfree from cancer-associated stroma. The present study aims to characterize SPARC expression in mucocutaneous SCC as well as to compare its expression pattern to that of SMA in order to determine its potential for serving as a diagnostic tool.

After institutional review board approval, nineteen cases of infiltrating, keratinizing squamous cell carcinoma from mucocutaneous body sites were retrieved from the pathology and dermatopathology archives (14 cases from the upper aerodigestive tract, 4 from non-genital skin, and 1 from genital skin). Among these cases, 7 had areas of tumor-free stroma for comparison. Additionally, tumor-free stroma from 12 separate cases were assessed. Histopathological interpretation was performed on formalin-fixed, paraffin-embedded, H&E-stained sections. One hundred percent of mucocutaneous SCCs (n=19) demonstrated at least focal expression of both SMA and SPARC in stromal cells morphologically consistent with myofibroblasts (Figure 2). 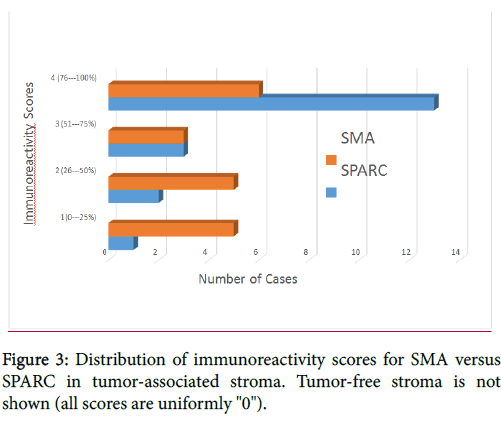 Figure 3: Distribution of immunoreactivity scores for SMA versus SPARC in tumor-associated stroma. Tumor-free stroma is not shown (all scores are uniformly "0").

The mean immunoreactivity scores for SMA and SPARC were 2.53 and 3.47, respectively. The mean immunoreactivity scores correspond to reactivity ranges of approximately 50% for SMA versus 75% for SPARC. In the 19 cases of tumor-free stroma assessed, SMA was negative in all cases, whereas SPARC was positive in approximately 5% of stromal dendritic cells in 58% of cases, which were morphologically distinct from the SPARC-positive and SMA-positive myofibroblasts (Figure 4). Additionally, SPARC expression was frequently seen in the basal layer of the epithelium as well as in histiocytes and blood vessels, whereas SMA expression was restricted to vessels and myofibroblasts (Figure 4). Figure 4: Comparison of SMA (left column) and SPARC (right column) expression in tumor-free stroma. SMA expression is limited to vessels, whereas SPARC immunoreacts with up to 5% of stellate-shaped stromal cells, which are clearly distinct from the rigid-appearing bipolar myofibroblastic cells (original magnification 200× and 400×).

Stromal SPARC overexpression is a consistent finding in invasive SCC. In comparison to SMA, SPARC is a more sensitive but less specific marker for cancer-associated stroma. Although both markers were at least focally positive in all cases of invasive SCC, the SPARC immunoreactivity was significantly more diffuse than that of SMA, thus offering greater diagnostic utility for detecting invasion in small biopsy specimens. SMA provides more specificity, however, with positive staining confined to myofibroblasts and blood vessels, unlike the SPARC expression observed in macrophages, epithelium, and scattered dendritic stromal cells. Positivity for the latter may be misinterpreted as indicators of malignancy, but these cells morphologically differ from the long, slender, rigid-appearing myofibroblasts that appear in malignant stroma. Thus, the use of both markers provides the best sensitivity and specificity. One important limitation of using these markers is that stromal expression of SPARC/SMA can be seen in various stages of wound healing and evolving fibrosis [10,23]. Stromal expression of SPARC/SMA in evolving fibrosis-particularly in combination with pseudoepitheliomatous hyperplasia-could be misinterpreted as invasive SCC (Figure 5). Figure 5: SPARC/SMA expression in a biopsy site illustrates a pitfall.

(a) SMA expression is apparent in this subepithelial scar, which is also highlighted to a greater extent by SPARC (b). (c,d) Higher-power examination reveals SPARC expression in myofibroblastic cells abutting entrapped islands of hyperplastic squamous epithelium, which could be misinterpreted as invasive SCC. The squamous epithelium is bland, however, emphasizing the need to correlate the stromal immunophenotype with epithelial dysplasia (original magnification 20x, 20x, 100x, and 400x).

In order to avoid this pitfall, it is crucial to scrutinize the epithelium for cytologic atypia sufficient to meet SCC criteria before rendering this diagnosis. In other words, since stromal expression of SPARC/SMA is not entirely cancer- specific, the use of these markers may be better suited for determining invasive versus in-situ SCC rather than distinguishing reactive from dysplastic epithelium. Overall, when interpreted within the proper context, the stromal expression patterns of SPARC and SMA can greatly enhance the detection of invasive carcinoma, thereby reducing false-negative diagnoses. Additionally, their application may aid in the diagnosis of early invasion wherein the evolution of stromal desmoplasia visible by light microscopy is often is often below the threshold of detection.

Copyright: © 2016 Paral KM, et al. This is an open-access article distributed under the terms of the Creative Commons Attribution License, which permits unrestricted use, distribution, and reproduction in any medium, provided the original author and source are credited.