Liriodendron tulipifera is widely distributed in Eastern America, from southern Canada to central Florida peninsula, and from Atlanta coast to the Mississippi River basin. Its sister-species, L. chinense , is regarded as an endangered species. In contrast, L. tulipifera is a pioneer and dominant tree species with strong adaption in forest community in Southeast US. Genetic diversity is the basis and premise of biodiversity, hence, one specie with low genetic diversity would not evolve or adapt to the changing environments. Furthermore, genetic diversity is a decisive factor of successful response of one specie to human disturbance, and the degree of intra specific genetic variation also has key effect on its potentiality of evolution. Since genetic diversity can be inspected with various DNA markers, this study analyzes the level of genetic diversity of L. tulipifera germplasm by using SSR markers.

All germplasm plants (Table 1) were conserved at Xiashu forest farm affiliated to Nanjing Forestry University. In the summer of 2009~2010, 2~3 fresh leaves of each plant were collected randomly and put into the ice box rapidly after they were stored in a valve bag. The fresh leaves were brought back and kept in a refrigerator under the condition of -70°C prior to DNA extraction.

In this experiment, the improved CTAB lysis-silica beads assay was used, in order to extract the genomic DNA of L. tulipifera [1].

Table 2: System of SSR-PCR amplification. Note: dNTP and magnesium 2+ to oscillation blender before use.

All polyacrylamide gel electrophoresis have been carried out according to Almasizadehyaghuti et al.

Band interpretation: SSR is co-dominant marker; the band with consistent electrophoretic mobility in the amplification product of the same primer has homology. The band data should be numbered as increasing sequences and the length of band with A, B, C, D, E…. for instance, the lowest is A, and the top most is D or E or others, the result of band reading is AB, BC, etc., besides, if one sample only has one band, the result of band reading is AA, BB, and so on.

Analysis of genetic relationship: Clustering analysis is conducted by utilizing software NTSYS-pc 2.10e and the clustering figure should be established with the method of UMPGA [8]. 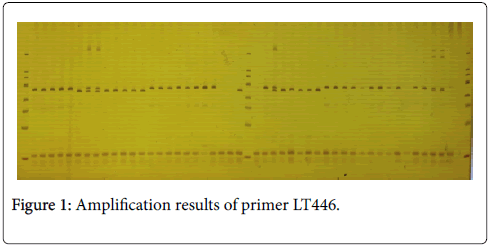 Fixation index (F) measures the degree of deviation between actual proportion of genotype and expected proportion of Hardy-Weinberg theory (Table 4). F<0 or F>0 means that heterozygosis is excessive or homozygosis is excessive respectively. When random mating of individuals in a population cannot be achieved, its actual proportion of genotype will deviate to some extent from Hardy-Weinberg equilibrium inevitably. As for LT102, LT297, LT488, and LT921 on 26 loci, their F<0, indicating that the heterozygosis are excessive on these four loci, and as for the rest loci, their F>0, showing insufficient heterozygote on the rest loci.

From Table 5, it can be found that, among five provenances, the effective number of alleles (Ne) of provenance LYS is the highest (2.4031), while provenance ZZY is the lowest (1.9382). The variation range of Nei diversity index ranges from 0.4330 (ZZY) to 0.5643 (LYS); the maximum of Shannon diversity index (I) is 0.9532 (LYS), and the minimum is 0.7009 (ZZY). Generally, LYS has the highest level of genetic diversity, while ZZY the lowest genetic diversity. As for the fixation index, the degree of deviation of NK from equilibrium is largest, although it has maximal fixation index (F=0.4187), however, the degree of deviation of ZZY from equilibrium is smallest, although it has minimal fixation index (F=0.0623).

Fis and Fit represent the degree of deviation of single population and total population from Hardy-Weinberg equilibrium. As for five L. tulipifera provenances, Fis=0.1965, the average Fit=0.3789, which shows that heterozygote is insufficient not only in total level but also in individuals of each provenance. Among five L. tulipifera provenances, gene flow Nm=0.8513 and genetic differentiation coefficient Fst=0.2270, which means that 22.70% of genetic variation exist among provenances, and 77.30% of genetic variation exist within provenance. 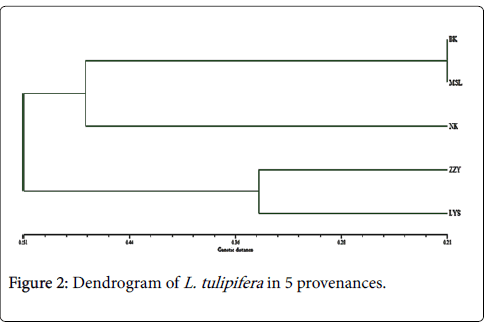 Genetic diversity is the result of long-term evolution of the species and represents the potential of evolution of species, which is the premise for the survival and development of populations. In order to survive and develop in an unstable environment, the species are obliged to generate and accumulate genetic variation. On the basis of the results of this research, the effective number of allele of five L. tulipifera provenances is 2.9714, the variation range of Nei expected heterozygosity (Nei) is 0.3041~0.7662, which show that L. tulipifera has high level of genetic variation. It can further declare that L.tulipifera is one pioneer tree species with high adaption and wide distribution range, moreover, continues geographical distribution increases the pollen flow and seed dispersal among populations. Meanwhile, the large gene flow among populations also results in high level of allelic richness and genetic diversity of L.tulipifera.

Copyright: © 2017 Almasizadehyaghuti A, et al. This is an open-access article distributed under the terms of the Creative Commons Attribution License, which permits unrestricted use, distribution, and reproduction in any medium, provided the original author and source are credited.