Background: The lumbar spine and cervical spine are vulnerable with degeneration, which is related to idiosyncratic problem, aging or improper stress of the spine. Biochemical and structural changes of disc, narrowing of intervertebral disc space, acute or chronic disc protrusion related to disc degeneration with/without neural symptoms are well documented. We are interested in the morphologic changes of the excised herniated or degenerative discs from the spinal surgeries for herniated intervertebral disc (HIVD), spondylolisthesis or spinal stenosis.

Methods: The specimens are collected under the permission of institutional review board (IRB), and are divided into three main groups, including 9 specimens (9 cases) of HIVD, 12 specimens (10 cases) of spondylolisthesis, and 10 specimens (10 cases) of spinal stenosis. Five disc specimens of 3 cadavers (3 from lumbar L4-5 disc and 2 from thoracic T9-10 disc) with no mentioned disc disease are obtained for control group. Histochemical stains of hematoxylin and eosin (H and E) stain and safranin-O-fast green stain are performed to evaluate the content of glycosaminoglycans and chondrocytic proliferation. The photos of disc lesions are taken with consistent LED light of Niko n Coolscope II to analyze the discoloration within the H and E and safranin-O stained sections. Kruskal-Wallis test (one-way ANOVA) was performed for significance check.

Results: HIVD cases have younger age (p=0.036). The excised disc specimens of HIVD group show mild loss of glycosaminoglycans over nucleus pulposus, and even less eosinophilic change in the nucleus pulposus. The discs of spondylolisthesis and spinal stenosis groups may display uneven loss of glycosaminoglycans with occasionally massive loss, and more eosinophilic change than that of HIVD group (p=0.014). Clonal proliferation of chondrocytes over the areas other than endplate and outer rim of annulus fibrosus is a consistent phenomenon in all three groups of degenerative discs, and displaying lesser degree of chondrocytic proliferation among the HIVD cases without significant difference.

Intervertebral disc is belonged to the kind of fibrocartilage, and composed of nucleus pulposus, i.e., a gelatin-like center, and annulus fibrosus, a thick capsule of air-bag-like structure. The end plate, a dense fibrocartilage interface, functions as a buffer between vertebral body and intervertebral disc, and may influence the nutrition support from verbebral capillaries [1]. The lumbar spine and cervical spine are two regions vulnerable with degenerative change due to idiosyncratic tendency, aging or improper stress. HIVD is most frequent cause of sciatica [2]. Spinal stenosis and spondylolisthesis are other common causes of low back pain or even lumbosacral radiculopathy with functional disturbance of lower limbs. Biochemical and structural changes of disc, narrowing of intervertebral disc space, acute or chronic disc protrusion with/without neural symptoms related to disc degeneration are well documented, and also called spondylosis. Osteoarthritis of knee joint with loss of articular cartilage and narrowing joint space on X-ray film is the most well-known degenerative joint disease, can be graded by Safranin-O stain. Therefore, we are interested in safranin-O stain for comparing the glycosaminoglycan (GAG) content in addition to the conventional microscopic findings on the excised disc specimens.

The specimens are collected under the permission of institutional review board (IRB: B09901002-1), and are divided into three main groups, including 9 specimens (9 cases) of intervertebral disc herniation (HIVD), 12 specimens (10 cases) of spondylolisthesis, and 10 specimens (10 cases) of spinal stenosis (Table 1). If more than one type of spinal diseases is diagnosed, the case will be distributed into the group of severer one. Three lumbar disc (L4-5) specimens and 2 thoracic disc (T9-10) specimens from 3 autopsy cases with no mentioned disc disease are enrolled for control group. One is a victim of Wilms’ tumor with mild cachexia died at the age of 34 years old. Another one is a victim of breast cancer with minimal cachexia expired at the age of 42. The rest case expired at the age of 81 due to chronic disease without past history of intervertebral disc disorder (Figure 1).

Table 1: The genders, ages and preoperative diagnoses (made by medical images and clinical findings) of 3 groups of specimens. Figure 1: Cross section of autopsy resected lumbar intervertebral disc of 81-years-old cadaver with relatively normal contour, one half more near end plate (A), and the other half with more disc tissue itself (B).

Histochemical stains, including hematoxylin and eosin stain and safranin-O-fast green stain, are performed with usual standard procedures, except for Safranin-O stains are performed using 0.25 g/100 ml of SIGMA fast green ECF as working solution, which can demonstrate the extracellular matrix changes between GAGs (orange) and collagens (green).

The photos are taken by Nikon COOLSCOPE II digital microcope with unadjustable and consistent LED light source. We use Adobe Photoshop CS4 to calculate the ratios of blue/red peaks for safranin-O stained at most green discoloration sites (Figure 2A). We also calculate the color intensity ratios of red/blue peaks for selected H and E stained most eosinophilic discoloration sites to get the quantitative data and simulate colorimetry (Figure 2B). 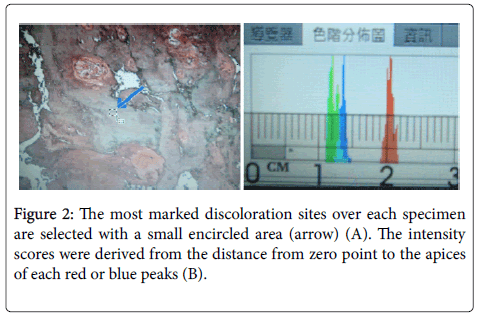 Figure 2: The most marked discoloration sites over each specimen are selected with a small encircled area (arrow) (A). The intensity scores were derived from the distance from zero point to the apices of each red or blue peaks (B).

Averages of top 3 clonal proliferative fibrochondrocyte numbers are counted to evaluate the severity of chondrocytic proliferation.

Kruskal-Wallis test was performed for significance check. The pvalue was set at 0.05 for all statistical analysis.

The average age (mean=52.9) of HIVD patients is significantly younger than those of spinal stenosis (68.6) and spondylolithesis (62.0) (p=0.036). Normal disc with gray colored nucleus pulposus, and reddish annulus fibrosus due to more type I and type II collagen fibers [3] are discernible on H and E stain (Figure 3A). The safranin-O stain demonstrates outer rim of annulus fibrosus with green colour and indicating very low GAG substance. Middle and inner rim of fibrosus reveals highest amount of GAG content (orange), and intermediate intensity of GAG substance over nucleus pulposus (Figure 3B). The eosinophilic changes (Figure 3C) of focal nucleus pulposus on H and E stain of spinal stenosis (mean rank=16.43) or spondylolithesis cases (mean rank=16.85) are significantly more than those of HIVD cases (mean rank=7.5) (Table 2) (p=0.014). However, the green discoloration (loss of GAG)(Figure 3D) detected on safranin-O-fast green stain of spinal stenosis (15.71) or spondylolithesis cases (15.10) is nonsignificantly more than those of HIVD cases (mean rank=10.00) (Table 2) (p=0.233).

Table 2: Statistical analysis of B/R ratios for safranin-O stain (index 1), and R/B ratios for H and E stain (index 2) (calculated at the mid-term of study, not include all the cases of spondylolisthesis and spinal stenosis). Focal clonal proliferation of chondrocytes over the areas other than endplate and outer annulus fibrosus is a consistent phenomenon in all three types of degenerative disc, while lesser degree of the proliferation among the HIVD cases (p=0.169). Indeed, all three groups have abnormal chondrocytic proliferation (Figure 4) comparing with the control group (p=0.009, Table 3).

Table 3: Statistical analysis of the degrees of clonal chondrocytic proliferation reveals no significant differences among the study groups, but abnormal increase observed comparing from the small control group (p=0.009). 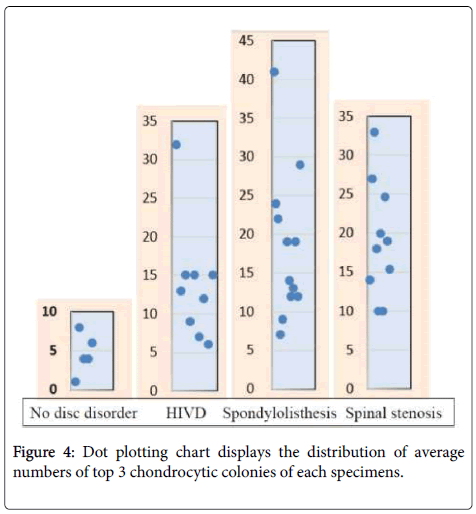 Low back pain frequently involves some pathophysiologic situations of interverteberal disc or osteoarticular compartments of spine. However, HIVD, spondylolithesis and spinal stenosis are 3 main causes with different etiologies. We choose 5 specimens from autopsy cases as control group to compare the tissue characters and morphology with histochemical stains, which are easier than ultra-structural studies or molecular studies to be kept in acceptable experimental quality. Degeneration of intervertebral disc has been partially proved by our semi-quantitative study. The nature of eosinophilic change on the degenerative disc is correlated to from preservation of GAG to loss of GAG or even necrotic change. So the eosinophilic changes should be subdivided into more than one mechanism that is not clarified in this study. The uneven loss of GAGs expressed by safranin-O stain within the degenerative discs unlike the mild even loss of orange coloration on the nucleus pulposus of the 81-year-old cadaver. Disc cell clusters in pathological human intervertebral discs is well documented [4]. Clonal choncrocytic proliferation may develop in brown or greenish areas of nucleus pulposus with safranin-O stain (Figure 5) or the inner rim of annulus fibrosus, as nidus of disc degeneration mentioned by Shamji et al. [5]. Ovoid to polymorphus eosinophilic globules can seldomly be seen within the clonal condrocytic territory or in between the territories. Figure 5: Clonal chondrocytic proliferation can be found over the regions of loss (green) or preservation (brown) of GAGs (safranin- O stain 100X) (A, B). A small area of increased chondrocytic cellular density without the typical pictures of clonal proliferation is noticed over degenerative nucleus pulposus (encircled area) (C). Three atypically proliferative chondroid foci are found over focal end plate (yellow arrows) with one at calcification stage (black arrow) (H and E, 100X) (D).

Occasional foci of proliferative” isolated” chondrocytes with an indistinct boundary, may be a kind of chondroid metaplasia, are observed. Taking the example of a focus found in a 79-year-old patient with recurrent herniation of intervertebal disc (Figure 5C), and the other example of involved end plate happened to a 40-year-old patient with L5/S1 spondylosthesis and disc herniation (Figure 5D). Migration of the atypical chondroid metaplastic tissue from nucleus pulposus into surrounding annulus fibrosus or end plate are suspected, and supported by observable tissue gap round the atypical metaplastic tissue foci after tissue processing. It might be hypothetically considered a tissue defect made by the bullet-like chondroid tumorlet over inner rim of annulus fibrosis may weaken the annulus fibrosus and eventually disc bulging or herniation.

Neovascularization by ingrowth of capillares are noted in few cases over focal fibrous perichondrium or nearby outer rim of annulus fibrosus, but vary rarely found over other areas of the intervertebral disc.

The pathologic microsection technique for disc specimens are relatively difficult due to variable textures within the intervertebral disc, ranging from soft to dry tough and even bony hard. Decalcification can either affect the result of histochemical staining unless adequate neutrolization of the decalcified specimens in running water. Dividing the key specimens of operated degenerativer disc into separate jars for further recognition of the characteristic pathologic changes and then molecular pathologic changes are the next goal of this study group.

We notice that a few pathologic pictures do exist in all 3 groups of degenerative disc, but HIVD specimens have less severity of morphologic changes than those of spinal stenosis and spondylolisthesis with the eosinophilic change of nucleus pulposus having the significant difference. Spondolithesis and spinal stenosis cannot exclude the possibility of disc-induced diseases. However, regenerative proliferation (clustering) of chondrocytes is present in all of degenerative intervertebral disc, no matter what the clinical course is chronic or acute. The chondrocytic proliferation in the fibrocartilage of disc might be similar to the chondrocytic clustering within the synovial joint cartilage of grade 3-4/6 osteoarthritis which is a grading system proposed by Pritzker et al. [6].

Copyright: © 2016 Shih CM, et al. This is an open-access article distributed under the terms of the Creative Commons Attribution License, which permits unrestricted use, distribution, and reproduction in any medium, provided the original author and source are credited.