Therapeutic Management of Submucosal Gastric Tumors: A Series of Six Cases with Ectopic Pancreas in the Stomach and Description of a Novel Endoscopic Full-Thickness Resection Technique of the Gastric Wall

Therapeutic Management of Submucosal Gastric Tumors: A Series of Six Cases with Ectopic Pancreas in the Stomach and Description of a Novel Endoscopic Full-Thickness Resection Technique of the Gastric Wall

Copyright: © 2016 Archid R, et al. This is an open-access article distributed under the terms of the Creative Commons Attribution License; which permits unrestricted use; distribution; and reproduction in any medium; provided the original author and source are credited.

Ectopic pancreas is a benign congenital abnormality, defined as pancreatic tissue that lacks anatomic or vascular continuity to the pancreas. An incidence of 0.55%-13% has been described in autopsy studies. Ectopic pancreas is most commonly found in the upper GI-Tract.

Ectopic pancreas is a benign congenital abnormality, defined as pancreatic tissue that lacks anatomic or vascular continuity to the pancreas. An incidence of 0.55%-13% [1,2] has been described in autopsy studies. Ectopic pancreas is most commonly found in the upper GI-Tract (in 90% of all cases in the stomach, duodenum or upper jejunum) [3]. The highest incidence of ectopic pancreas occurs in the 4th, 5th and 6th decade, 2-3 times more frequently in males [4,5]. The condition is usually asymptomatic and may become clinically evident when complicated by pancreatitis [6], malignancy [7,8], obstruction [9], ulceration and bleeding [10,11]. Pre-interventional diagnosis of submucosal tumors, especially of heterotopic pancreas is considered difficult, even in experienced hands. Due to the submucosal location, conventional endoscopic biopsies may not provide sufficient sensitivity [11]. In this article, we describe our experience in the handling of ectopic pancreatic tissue in the stomach in a series of 6 patients. Furthermore we believe to present the first description of a novel rendezvous full thickness resection procedure of the human gastric wall.

In this study, we retrospectively analysed the database of all patients treated within our Endoscopy Unit at the University of Tuebingen from January 2007 to January 2015. We selected a total of 6 patients, 5 male and 1 female, ranging in age from 21 to 56 years (mean 41.8 years) with histologically assured diagnosis of ectopic pancreas in the stomach, who have received different treatment strategies (Table 1). The study has been approved by the institutional ethics committee.

A novel prototype for endoscopic full-thickness-resection device has been used for the investigation in Case 5. The technique is described below in detail. Figure 1: Case 1: Ectopic pancreas as a 4 mm large polyp in the antrum.

Endoscopic mucosal resection (EMR) and tumor resection using a dual-channel technique: Case 2 is a 52 year old asymptomatic male with an incidental finding of a 10 mm submucosal tumor in the antrum. Endoscopic biopsy revealed chronic gastritis. Two months later, the patient underwent an EGD, in which EMR of the tumoroverlying mucosa was performed.

The tumor removal was performed using a dual-channel endoscope armed with standard forceps for traction of the submucosal tumor, and an endoscopic polypectomy snare for removal (Figure 2). Histology revealed benign ectopic pancreatic tissue within the submucosa. EMR and jumbo forceps tumor removal with application of an over the-scope clip (OTSC) for hemostasis: Case 3 is a 46 year old asymptomatic male with an incidental CT-scan finding of enlarged abdominal lymph nodes. EGD and endoscopic ultrasound (EUS) revealed a 15 × 10 × 5 mm prepyloric submucosal tumor lying within the third layer of the gastric wall. EMR of the overlying mucosa allowed complete tumor removal using a jumbo biopsy forceps. Hemostasis was achieved by application of an OTSC (Ovesco Endoscopy AG, Tübingen, Germany). There were no signs of paragastric or mediastinal lymphadenopathy. Histology revealed benign ectopic pancreatic tissue within the submucosa.

Endoscopic submucosal dissection (ESD) with application of an OTSC to prevent perforation and for hemostasis: Case 4 is a 56 year old male initially presenting with recurring epigastric pain. EGD showed a 1 × 1 cm ulcer in the antral region. Biopsies of the ulcer revealed chronic gastritis. 5 months after the initial presentation, the patient was readmitted due to acute epigastric pain. CT scan showed herniation of the stomach in the left thoracic region, with no signs of incarceration. The patient underwent again an EGD, showing no change of the hiatus hernia, though, the antral lesion initially interpreted as an ulcer appeared as a 1 × 1 cm large submucosal tumor with central ulceration. Tumor removal was intended during the same procedure. After submucosal injection of saline, sufficient elevation of the tumor was not achieved, therefore, ESD was performed and the tumor was completely removed. An OTSC was applied for hemostasis and to prevent perforation. Histological evaluation of the tumor showed ectopic pancreatic tissue.

The patient underwent a rendezvous procedure which involved laparoscopic mobilization of the greater curvature in order to achieve vision of the posterior gastric wall. Thereafter, one of the tumors was removed endoscopically using a novel prototype for endoscopic fullthickness- resection (FTRD, full-thickness-resection device; Ovesco Endoscopy AG, Tuebingen, Germany) [12].

FTRD allows incorporation of a double full-thickness layer of the gastrointestinal wall inside a transparent cap on the tip of the endoscope (Figure 3). By deployment of a preloaded modified 14 mm OTSC at the base of the inverted gastric wall folds, a double layer fullthickness pseudopolyp of the gastric wall can be created. Figure 3: Step 1-5: Endoscopic full thickness resection device (FTRD) with a transparent cap mounted onto the tip of the endoscope and a preloaded OTSC. Step 1: Visualization of the tumor through the mounted FTRD system with OTSC® at the tip of a transparent plastic cap. Step 2: Still closed Anchor® (or grasper) inside the working channel of the scope. Step 3: The three branches of the opened Anchor® fixating the tumor (alternatively using a grasper). Step 4: Tumor retrieval with incorporation of a double full-thickness layer of the stomach wall inside the transparent FTRD cap and deployment of the OTSC® at the base of the inverted gastric wall. Step 5: Resection of the created double layer fullthickness pseudopolyp of the gastric wall above the OTSC® with a preloaded polypectomy snare (orange) at the tip of the FTRD cap.

In this way, the resection area gets closed first. Then a preloaded polypectomy snare resects the full-thickness gastric wall specimen above the OTSC similar to the EMR-cap resection technique (Figure 4). A grasping forceps was used to grasp the gastric wall to be withdrawn into the FTRD cap (Figure 3). A complete serosa-to-serosa contact of the wound edges was monitored laparoscopically after closure with OTSC. 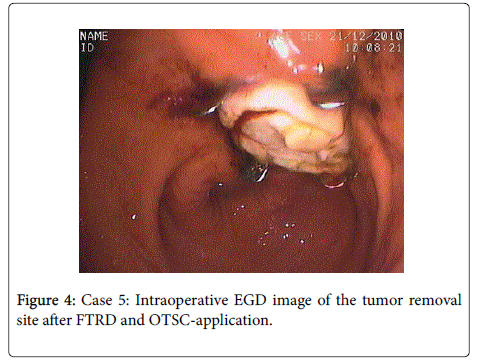 Intraoperative frozen section evaluation of the removed tumor revealed ectopic pancreas. Then the procedure was terminated leaving the second lesion in place.

Control EGD one month after the intervention showed no tumor at the site of resection and good healing of the mucosa. The OTSC dispatched spontaneously.

Laparoscopy: Case 6 is a 45 year old male presenting with recurring right upper quadrant pain. Abdominal ultrasound demonstrated cholecystolithiasis. Elective laparoscopic cholecystectomy was performed, during which a whitish solid tumor with central ulceration was found on the lesser curvature of the stomach involving the lesser omentum. The intraoperative finding was suspicious for a gastric cancer or peritoneal carcinomatosis. The tumor was biopsied laparoscopically, intraoperative frozen sections showed no sign of malignancy with suspicion of ectopic pancreatic tissue, which was confirmed by subsequent histological evaluation. Postoperative EGD showed no sign of intraluminal manifestation. Postoperative CT scan showed the tumor on the lesser curvature with no signs of further tumor manifestations (Figure 5). 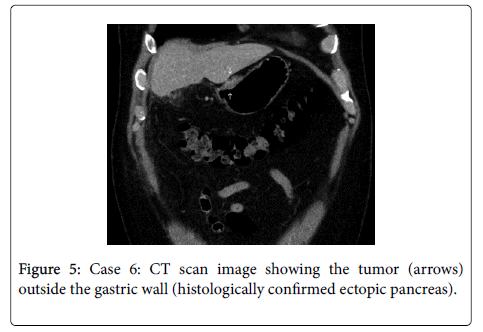 In this article, we describe our experience in the handling of ectopic pancreatic tissue in the stomach in a series of 6 patients. Pancreatic heterotopia is usually asymptomatic [13]. Symptoms occur when lesions are large enough to cause obstruction. Armstrong et al. mentioned that a lesion size of more than 1.5 cm tends to cause symptoms [14]. Four patients of our case series were symptomatic (case 1,4,5 and 6). Case 5 had two tumors measuring 12 mm and 8 mm lying in a nearby, that might have caused the described symptoms. Chronic gastritis, cholecystolithiasis or hiatus hernia could be responsible for symptoms in cases 1, 4 and 6.

Central umbilication or dimpling is a typical upper endoscopy finding indicative of ectopic pancreas, however, this finding has been described to be present in 34.6%-90.0% of cases [15,16]. A central umbilication was present in only one of our cases (case 4). Superficial erosions and ulcerations are common findings in GIST, as well as hyperplastic, inflammatory-fibroid and juvenile polyps of the stomach [13], additively contributing to the difficulty of defining 'ectopic pancreas' macroscopically.

Previous reports described heterogeneous echogenity, indistinct borders and presence of anechoic duct-like structures to be typical EUS findings of ectopic pancreas [15,16]. Using EUS, Park et al. distinguished between the well endoscopically removable superficialtype, where pancreatic tissue is located in the mucosal/submucosal layers and the deep-type, where endoscopic removal is less feasible [15]. EUS was performed in cases 3 and 5, heterogeneous echogenity was only seen in case 5. However, neither presence of anechoic ductlike structures nor indistinct borders were seen in both cases.

Due to the submucosal location, conventional endoscopic biopsy may not provide an effective diagnostic tool for obtaining adequate tissue samples. According to Shalaby et al. a second biopsy using jumbo forceps allowed for retrieval of a representative specimen [5]. Pre-interventional biopsy showed ectopic pancreas in only one of the five biopsied patients (case 1).

Pre-interventional CT-scan was performed in four cases (2,3,4 and 6). CT-images were analysed by a radiologist retrospectively according to the criteria described by Kim et al. Ectopic pancreas could only be identified in case 6. In this case, endoluminal growth pattern was not seen; the tumor appeared lying on the exterior gastric wall. Otherwise, the lesion was positive for the CT-criteria identified by Kim et al. The radiodensity of ectopic pancreas and normal pancreatic tissue was measured in case 6, showing similar values (discrepancy of 5 Hounsfield units).

According to Hsia, common diagnostic tools including gastroduodenoscopy, endoscopic ultrasound, abdominal sonography and CT-scan failed to identify ectopic pancreas in contrast to other submucosal gastric tumors [11]. Malignancies of ectopic pancreas have been reported in the literature, though the incidence is very rare [8,19].

In assured diagnosis of asymptomatic pancreas heterotopia, treatment is not mandatory. Due to the diversity of gastric polyps and the difficulty of the diagnosis of heterotopic pancreas, we considered removal of the lesions when possible. Hase et al. and Park et al. limited the possibility of endoscopic removal to superficial lesions [15,20].

In our center, we achieved good results using the OTSC® (Over-The- Scope-Clip, Ovesco Endoscopy AG, Tübingen, Germany), for achieving haemostasis in the upper gastrointestinal tract and closure of esophageal and gastric perforations [21]. The OTSC system consists of a Nitinol clip, similar in shape to a bear-trap, with a diameter of 12 mm which allows for closure of perforations up to 20 mm with a single clip [21,22]. Using this clip, deep and even full thickness resection of the gastric wall was possible (cases 3 and 5). Case 5 represents the first description of an endoscopic full thickness resection on the human gastric wall using this technique.

According to our experience, endoscopic removal of small shallow submucosal lesions using standard biopsy forceps could be sufficient as demonstrated in case 1. Deeper and larger submucosal tumors could be removed using EMR with subsequent forceps removal as demonstrated in case 3 or by utilizing a dual channel endoscope for both traction and resection (case 2). ESD was successfully utilized in cases of insufficient tumor elevation after saline injection as shown in case 4. This has also been described in a series of cases in the literature [23]. Laparoscopic management of pancreas heterotopias has also been described to provide a feasible, safe and effective treatment of pancreatic heterotopias [24].

Finally, a good cooperation between endoscopists and surgeons is necessary for minimal invasive management of submucosal gastric tumors.