The order Rodentia is the most widely existing group on Earth and largest group of small mammals, consist of one fourth the total mammalian species of Pakistan. House mouse, Mus musculus is commensal with human, omnivore and scavenger in nature. It is the definitive as well as intermediate host for trematode parasites. During current study, a total number of 32 mice were dissected for the presence of helminthic infection, resulted 62.5% of helminth infection with 12.5% prevalence of the trematodes. In present work, the most prevalent trematode species recovered was Artyfechinostomum sufrartyfex Lane, 1915 (Echinostomatidae) and reported for the first time from House mouse in Sindh region. Previously this species was reported from human being in Assam, India; also in rats, pigs, cat and dogs but first time from a House mouse. There is no record of this zoonotic species in Pakistan; therefore, this makes it as new locality and new host record.

The genus Artyfechinostomum Lane, 1915 with type species A. sufrartyfex Lane, 1915 seems to be dominant in Southeast Asia. It’s common in pigs experimentally infested white rats of India and Malaya, and as well its record from the human made its research study noticeably significant. Lane in 1915 described this species for the first time from an Assamese girl. Later, another scientist studied this genus discovered it from different mammalian host as well as reptiles [1]. Rai and Ahluwalia [2] discovered it from (S. domesticus ) domestic pig; Srivastava [3] from (Mellivora capensis ) Honey-badger; Matta and Pande [4] from (Rattus ) Rat and Piglets (experimental); Dubey et al. [5] from (Felis catus) Cat and (Canis cupus familaris ) dog; Mohandas from White Rats (experimental); Nath from (Lacertillia ) Lizard (experimental); and Agrawal and Pande [6] from Piglets (experimental). Previous authors studied it from naturally infected White Rats with metacercarial cysts removed from kidney of frog (Rana cyanophlyctis ) [7]. In Pakistan, very little work has been done on trematode parasites of mammals but none of the researchers have studied the House mouse. Therefore, study has been planned to study trematode parasite, A. sufrartyfex as described is recorded first time from Sindh province, Pakistan.

In Pakistan, variety of habitats is available for living of House mouse. These habitats include forests, agricultural areas, and most populated areas like cities, towns and villages. House mouse is found in human associated habitats like buildings and houses [8]. Sindh province has different type of habitats like coastal area of Karachi to fertile interior Sindh and dry area of Thar Desert which act as the rich habitat for the members of order Rodentia especially House mouse [9].

House mouse (Mus musculus ) is well-known major economic pest, contaminating food stuff and grains [10]. Rodents carry many zoonotic diseases; therefore, they are responsible for the spreading vector borne diseases. Rodents are responsible to transferring 60 known diseases to human and number is growing, due to their breed and occupying the high range of man-made habitats [11]. These diseases may transfer to the human body through consuming contaminated food by urine, droppings and bite of mice as well as the bite of ectoparasite like lice, mites, mosquito bite, etc. [12].

Trematodiasis is caused by trematodes through consuming contaminated food or water which infect host's lungs, liver and intestine. These trematodes are found in South East Asia, including India and Pakistan. Trematodiasis infects 56 million people all over the world according to WHO during 1980-2005 [13]. More than 20 million people were victimized with variety of infections caused by rodents [14]. In Pakistan, few researchers have worked on the helminths of rodents like Ahmed et al. and Rafique et al. [15,16]. None of them have recorded the trematode parasites from rodents. Therefore, keeping in mind the medical importance of Rodents specially the Mus musculus, it was, therefore, proposed to check the incidence of trematode parasites in the Mus musculus of district Naushahro Feroz, Sindh province of Pakistan. As a result, the present findings report as the first locality record of trematode genus Artyfechinostomum Lane, 1915 in Pakistan.

Live House Mouse (Mus musculus) was collected from five talukas of Naushahro Feroz. These included 1) Bhiria 2) Kandioro 3) Mehrabpur 4) Moro and 5) Naushahro Feroz. These locations were selected on the basis of the social and economic status of the people. City areas are mostly business-oriented segments of society and village are most congested areas with poorly developed in facilities in this district. Among well-developed city, areas include residential and adjacent areas (railways, road), shops, flour mills and departmental stores. Less developed areas of villages include Mud houses, Godams (ware house) and different mills (flour, rice etc.). These sites were randomly selected for collection of House Mice (Figure 1). 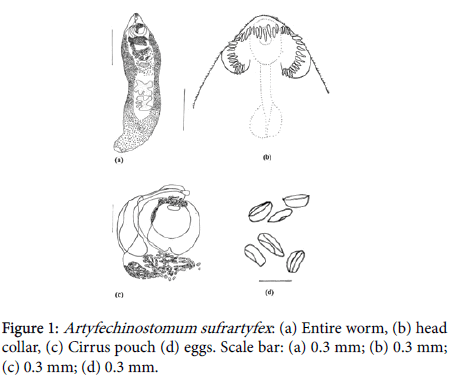 Several cages were collected on a weekly basis during present study one year of the study period and a total number of 32 mice were sampled. These cages were set at dusk and collected sample at next dawn. The captured specimens were tagged with locality and date of collection.

After killing, the hosts were placed on dissecting tray. Hosts were cut longitudinally to remove all internal organs. The gastrointestinal tract which divided into four parts including oesophagus, stomach, small intestine and caecum. Other organs including lungs, liver, kidneys etc. were also removed and placed in Petri plates separately. Some saline solution was added to Petri dishes containing these organs. Stomach was cut from surface layer with the help of fine scissor and forceps. Normal saline solution was used to separate parasites from walls and contents of the stomach. Complete gastrointestinal tract was opened length wise from the anterior part of the small intestine in a Petri dish containing a saline solution. The Liver was punctured with the help of fine needles. Care was taken to damage any parasite or cyst inside the liver. Lungs were also punctured with fine needles to open helminth worms within.

Helminths were collected from different organs with the help of needles, forceps and fine brushes. Care was taken to save scolex of cestodes because they are frequently attached to a small intestinal wall then leave in the solution for few minutes. Helminths were rancid in normal saline solution and then distilled water two to three times to shed off excess mucous attached to them. The Magnifying glass was also used to collect helminths with the naked eye. Liver of the mice was found to harbour cysts of cestodes. Special care was taken to collect these cysts without causing any damage. After collection of the cyst from the liver, these cysts were cut and pressed with a fine brush to collect metacestode. The collected trematodes were fixed in 70% ethanol and pressed for overnight, stained with borax carmine, and dehydrated in alcohol series, cleared in clove oil and xylol. They were permanently mounted in Canada balsam. The identification of trematodes was done with the help of keys and literature available.

During present study, 32 house mice were examined. Only single host was found infected with one specimen of trematodes. These trematodes were recovered from the intestine of the hosts. The description of specimens is given below.

Many species of this genus were identified with taxonomic units which had erected on morphological difference as number and arrangement of collar spines; cirrus sac with spines or without spines; anterior extent of vitellaria to anterior, middle, or posterior level of ventral sucker; presence or absence of seminal receptacle; presence or absence of spines on excretory pore and finally size of eggs. As present specimen has 43 spines in head collar; body spinose; cirrus sac and excretory pore aspinose and absence of seminal receptacle are found from Pakistan and host Mus musculus. A. sufrartyfex differs from present specimens in having the maximum length of body at testes level; ventral sucker muscular and cup-shape; uterus without coils, long; spinose cirrus sac; excretory pore sub-terminal, eversible spines; size of body had found difference in length and width. It differs with present specimens in size of body and other organs but resembles in number of collar spines, shape and position of organs. The differences in size may be due to the ages of specimens, different ecological and geographical factors and feeding behaviour of host.

Previously this species was reported from a girl (Human) in Assam, India; also, in Rats, Pigs, Cat, and Dogs [2,4]. And also, in Palm Civet, Paradoxurus hermaphroditus schreber ; white rat (experimental). This species is distributed throughout India including Assam, Calcutta, Banaras, Aligarh, Lucknow, Uttar Pradesh, Jabalpur, Madhya Pradesh, Madras, Rangoon, Burma and Malaya States [17]. From Asia and Philippines, it was recorded from Humans, dogs, cats, birds, and reptiles [13], and in Southeast Asia this species was found from Thailand, Indonesia and Singapore reported from house Shrew, Hamsters, Mice, Dogs, Cats, Rats, Pigs, and Humans (Table 1). Previously, there was no record of this zoonotic species in Pakistan, therefore, being reported for the first time from Pakistan of the House mouse Mus musculus [18-20].

Artyfechinostomum sufrartyfex Lane, 1915 is recorded for the first time from Naushahro-Feroz, Sindh, Pakistan. It is identified on the basis of its generic characters. Present paper will be helpful in further study on present host, parasite and its locality.

Copyright: © 2019 Rajper M, et al. This is an open-access article distributed under the terms of the Creative Commons Attribution License, which permits unrestricted use, distribution, and reproduction in any medium, provided the original author and source are credited.