Twenty-five years ago in March of 1989, Prof. Fleischmann and Pons [1,2] at the University of Utah, announced they had discovered a novel method to produce significant nuclear energy without radiation. Nuclear fusion was claimed to take place between deuterons in palladium when subjected to electrolysis. This phenomenon became known as cold fusion, and now, low energy nuclear reaction (LENR). This claim was rejected by conventional science for several reasons that seemed plausible at the time. Nevertheless, active study of the process continued and is on going in at least eight countries by a growing number of scientists because they continue to observe the behavior. This work has now resulted in thousands of published papers, a collection of books1 describing the science [3-6] and history [7-13] many reviews [14-19] accessible to popular understanding, including lectures on YouTube2. Several websites provide a rich source of information.3 This enormous collection of evidence no longer justifies rejection.

Because many influential scientific journals will not accept papers about the subject, and some voices [20-27] have insisted the claims are an example bad science, the general public can be forgiven for being generally unaware of what has been discovered and its important implications. This attitude needs to change because the clean, unlimited, and inexpensive energy LENR promises is desperately needed by the world.

Three messages are important to hear. LENR is real, LENR can generate ideal energy having important economic and political implications, and LENR reveals a new type of nuclear interaction having important scientific implications. These issues are examined briefly below. Justification for these general conclusions can be found in the small fraction of available literature cited here.

When a new discovery is made, science and simple logic require it to be replicated before it is accepted. Because the LENR effect proved to be especially difficult to replicate, acceptance was delayed. This handicap is still operating, but is significantly reduced as persistence has identified many important variables. As result, the effect has been replicated hundreds of times while using many different materials and at least5 different methods. These methods include electrolysis, lowvoltage gas discharge, plasma discharge within a liquid, exposure of an active material to H2 or D2 gas, and application of acoustic waves. Each method is found to produce energy well in excess of any plausible chemical source that is correlated with identified nuclear products. These products include helium-4 tritium, and various transmutation products.

Obviously an unusual common feature is produced in the material by each of these treatments. This feature, called the nuclear active environment (NAE), is then able to cause nuclear interaction regardless of the isotope of hydrogen made available to it from several different sources. Because space is not available here to list all the replications, the reader will have to accept this statement and look at the cited examples if curiosity warrants. The most complete description of the observations can be found in the books by Storms [3,6].

When deuterium is used, the main nuclear product is helium (4He) along with some tritium (3H) on occasion. The helium results from a novel kind of D+D fusion that releases the excess mass energy without significant detected radiation. The mass change resulting from two D creating 4He requires 2.62×1011 He/watt-sec4 to be released as heat. The various measurements of the helium/energy ratio are listed in (Table 1). 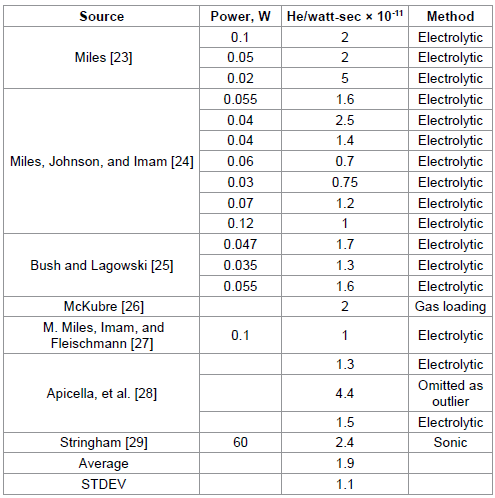 The large scatter, and the average that shows too little helium than expected, can easily be explained. The average contains less helium than expected because the amount of helium was based on helium that could be easily removed from the Pd where it formed. The scatter is high because a variable amount would be removed and because the measurements of helium and energy would contain some uncertainty. Nevertheless, such agreement could not be achieved if all the helium resulted from contamination and all energy resulted from a sources not related to helium production.

Tritium is proposed to result from fusion between deuterium and the occasional protium impurity during which an electron is captured. This reaction rate has been too low to produce detectable energy. Nevertheless, the tritium is clearly detected and can only result from a nuclear reaction taking place in the apparatus. The nuclear product resulting in energy when only H is used has not been experimentally identified although significant energy can apparently be made using this isotope.

Nuclear reactions, called transmutation, are reported on occasion when two or more deuterons or protons enter the nucleus of a target element that happens to be present on the surface of nuclearactive material. Explaining this process is an especially difficult job, although the evidence for several kinds of mechanism is strong. The transmutation reaction also has too low a rate to produce detectable energy.

Many proposed explanations of LENR have been published, most of which are in conflict with observation, natural law, and each other. The reader will not be troubled here with the efforts presently underway to resolve this ongoing conflict. Nevertheless, the unique LENR process can be explained by using few novel concepts and without violating natural law. In addition, the concepts obtained from study of the conventional type of fusion, called hot fusion; need to be ignored because cold fusion and hot fusion have little in common. Ironically, the early belief that these two kinds of fusion were related resulted in especially hostile rejection by the physics community. Such rejection is no longer justified based on this belief [28].

Energy resulting from the fusion process has been measured using a variety of instruments. Values sometimes exceeding tens of watts, on many occasions, greatly exceed the expected error of the calorimeter. A typical collection of studies, shown in Figure 1, can be compared as a Histogram with a comparison made between the numbers of occasions various amounts of power are observed in a bin size of 5 watts and the amount of power detected by each measurement. Since the samples all have similar size, the amount of power is roughly related to the fraction of the sample that is able to. Figure 1: Histogram of measurements of excess energy produced by LENR using a variety of methods with deuterium as the active hydrogen isotope. A total of 157 measurements are plotted. (From: Storms [3] cause fusion).

The shape of the histogram is typical of energy being produced at many isolated regions having random concentration. The higher the concentration of NAE, the greater the produced power but the less often this number is created in a material. These special sites where the reaction takes place, occur in the surface region and not within the bulk interior of the material, and are the unique location of the nuclear process. Apparently, a rare and difficult to form condition can be created in certain solid materials in which nuclear reactions can occur. These special sites must be identified and created on demand at higher concentration for the process to have practical application. Because these sites exist only at the Nano-level, their study will be difficult but critical to discover the new kind of nuclear interaction LENR has revealed.

Recently, the claims for energy using H2 applied to nuclear active nickel have reached several kilowatts and have encouraged a search for a method to produce commercial power using this combination of materials5 [29-34].

The energy released by LENR involves no significant radioactivity or harmful radiation, and the generators can be small and inexpensive. Nuclear meltdown is not possible. Because the fuel is contained in ordinary water, the energy would be available to all countries and could be generated in each home or business. Such energy could not be interrupted by weather, terrorists, or political conflict. Since CO2 is not produced at any stage in its use, LENR poses no threat to global warming. A rational person has to wonder why such an ideal energy source is not implemented immediately.

But like all good things, a dark side is possible. First, the present industries supplying carbon-based or uranium-based fuel would go out of business. The grid system would not be necessary and would cease to exist. Even the clean energy sources, such as solar and wind that are attached to the grid, would find selling their energy to be very difficult. In short, the advanced nations that use oil, coal, natural gas, and uranium for energy would face possible financial collapse of their major industries. In addition, all nations that rely on selling these fuels to the rest of the world would experience the same fate. Although wars over access to oil would no longer be necessary, the initial economic collapse might be too high a price to pay.

So, the world is presented with a choice. If this energy source is ignored, the damage to the environment will grow until some country discovers how to make essentially free energy using the method, thereby giving this country great advantage. Or, the world can invest in discovering how LENR works while finding ways to introduce the energy source without causing too much economic damage. This problem is not going to go away by blind rejection. Pandora’s Box has now been opened.

Since LENR has little to do with hot fusion something very unusual must happen in certain materials that are not possible in plasma where hot fusion takes place. This unusual process allows two hydrogen nuclei to come close enough to fuse without applied energy, without the resulting excess mass energy being dissipated without destruction of the nuclear product, and without significant radiation being detected. Hundreds of attempts have been made to explain how this is possible. At the very least, two or more nuclei need to find each other in an array of metal atoms. Further, simply being able to get close is not enough, because when this separation is reduced, hot fusion produces fragmentation of the nuclear product into energetic neutrons (n), protons (p), tritium (3H) and helium-3 (3He), which are not observed in LENR.

Nevertheless, in LENR the excess mass energy resulting from D-D fusion is measured as heat having a magnitude consistent with the amount of helium-4 (4He) detected. In addition, tritium is made without the expected neutron. Clearly, a novel and previously overlooked mechanism is operating. Once this mechanism is understood, many other kinds of unexplained nuclear reactions will be easier to explain, including biological transmutation [35].

The discovery of cold fusion (also called LENR) promises to provide a source of ideal energy. This energy has the potential to solve many problems while creating many others. In addition, the growing understanding of the mechanism is expected to reveal new ways nuclei can interact. Consequently, this discovery, although presently rejected by conventional science, has the potential to change life in unexpected ways. These changes must be managed effectively because cold fusion is real and is ignored at our extreme risk.

We have been given another gift by Nature. Once again, how we use LENR will determine the fate of the Human race.

1 Books rejecting the claim are best used only for historical documentation in view of their obvious failure to correctly describe events.

4 This representation is equivalent to 23.8 MeV/He, which is the energy created by the difference in mass between two d and the resulting 4He.

Copyright: ©2015 Storms E. This is an open-access article distributed under the terms of the Creative Commons Attribution License, which permits unrestricted use, distribution, and reproduction in any medium, provided the original author and source are credited.