The Role of Upregulated APOE in Alzheimer's Disease Etiology

Copyright: © 2016 Gottschalk WK, et al. This is an open-access article distributed under the terms of the Creative Commons Attribution License, which permits unrestricted use, distribution, and reproduction in any medium, provided the original author and source are credited.

The first and most firmly established genetic risk factor for sporadic late onset Alzheimer’s disease (LOAD) is the e4 allele of the apolipoprotein E (APOE) gene [1]. Carrying the APOEe4 variant significantly increases the lifetime risk for LOAD, with the number of copies present indicative of level of risk [1,2] and is associated with lower age of clinical disease onset [1,3-6]. Furthermore, genomewide association studies (GWAS) for sporadic LOAD confirmed that APOE is the major susceptibility genomic region for the disease and reported significant associations with markers within the APOE linkage disequilibrium (LD) locus (contains APOE, TOMM40 and APOC1 genes). The strongest association signal (by wide margin) in these studies was found at the APOE LD region and no other LOADassociation in the human genome remotely approached the same level of significance [7-10]. However, the molecular mechanism underlying the reported genetic LOAD-associations with APOE LD region in general and APOEe4 haplotype in particular has yet to be discovered.

It has been suggested that alteration of the expression levels of specific genes may be an important mechanism in the etiology of neurodegenerative disorders including LOAD [11]. Previously, using temporal and occipital tissues obtained from APOEe3/3 donors we showed that APOE-mRNA levels are significantly increased in LOADaffected brains compared to controls [12]. In preliminary studies, we performed expression analysis in cortical neurons from the temporal cortex of 3 LOAD patients and 3 normal controls isolated by laser capture microdissection (LCM) technique. We analyzed the APOEmRNA counts relative to geometric mean of two housekeeping genes using the nCounter single cell gene expression technology and the nSolver program (NanoString). The results showed increased APOEmRNA in LOAD compared to normal (our unpublished data) and validated our published findings obtained using homogenates of brain tissue for the expression analysis [12]. Our observation was consistent with other reports of elevated levels of APOE-mRNA in LOAD brains. For example, Zarow et al. report increased APOE-mRNA levels in the hippocampus of AD cases compared to controls [13] and Matsui et al. report increased APOE-mRNA levels in temporal cortex of AD donors compared to controls [14]. Furthermore, Akram et al. have demonstrated that APOE-mRNA and protein levels in the inferior temporal gyrus and the hippocampus are strongly, positively correlated with the progression of cognitive dysfunction [15].

A recent study showed that endoplasmic reticulum (ER)- mitochondrial communication and mitochondria associated ER membranes (MAM) function-as measured by the synthesis of phospholipids and of cholesteryl esters, respectively-are increased significantly in cells treated with APOEe4-containing astrocyteconditioned media (ACM) as compared to those treated with APOEe3- containing ACM [16]. Upregulated MAM function was implicated in the pathogenesis of AD [17,18]. The new findings that APOEe4 protein upregulates the activity of MAM may explain, in part, the contribution of APOEe4 as a risk factor in the disease. Enhanced activity of APOEe4 protein in correlation to AD-related cellular phenotypes has also been described previously. In human AD brain samples, amyloid deposits correlate with gene dosage of APOEe4 [19], and APOEe4 protein more actively forms fibrils with Aβ protein than APOEe3 in vitro [20]; moreover, APOEe4 aggregates are themselves neurotoxic [21]. APOEe4 is susceptible to cleavage of the C-terminus by cellular proteases, and the C-terminal fragments are cytotoxic, in part by eliciting intracellular neurofibrillary tangle formation and in part via disruption of mitochondrial and cytoskeletal functions [22-24]. APOEe4 and APOEe3 have different lipid-binding characteristics [25], contributing to greater Aβ-elicited lysosomal leakage and apoptosis in APOEe4- producing cells [26], and affecting the respective abilities of APOEe3 and APOEe4 to support neuronal maintenance and repair.

Interestingly, we showed that SNP rs429358, that defines the APOEe4 haplotype, has a significant effect on APOE-mRNAs levels in temporal cortex obtain from LOAD cases. We demonstrated that the level of APOE mRNA was significantly higher in the APOEe3/3 genotype group compared to APOEe3/4-genotype (Figure 1). In unpublished work, we measured APOE- mRNA levels in whole brains from humanized –APOEe3 and –APOEe4 homozygous mouse models generated by targeted replacement [27,28]. We found that human APOEmRNA levels are>35% higher in brains of APOEe3 homozygous mice compared to mice homozygotes to APOEe4 (Figure 2). The analysis of humanized- APOE mice support the findings in LOAD-human brains, suggesting that while the effect of e4 variant is putatively on increased activity of the APOE protein, the effect of the e3 background is possibly executed via regulation of APOE gene expression that determines the steady state amount of the protein. 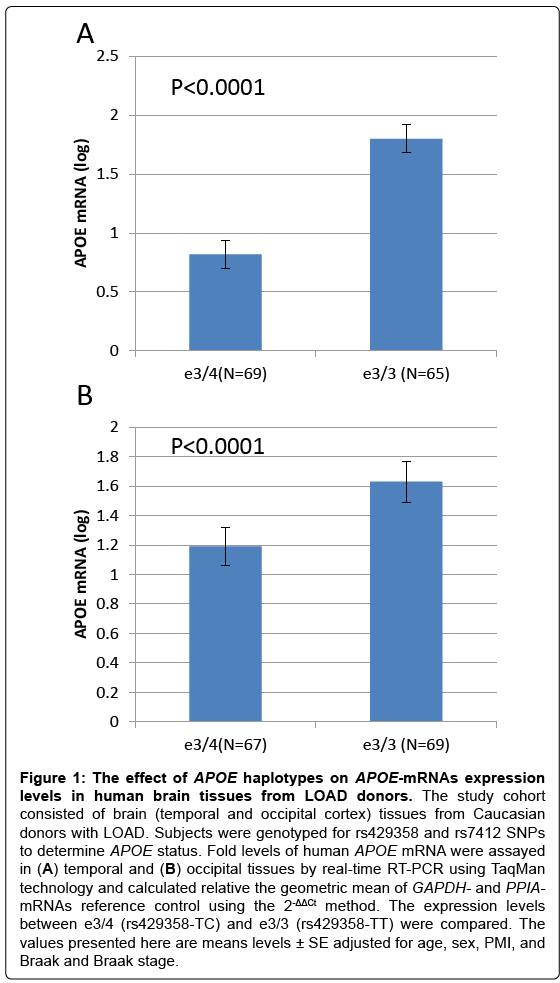 Figure 1: The effect of APOE haplotypes on APOE-mRNAs expression levels in human brain tissues from LOAD donors. The study cohort consisted of brain (temporal and occipital cortex) tissues from Caucasian donors with LOAD. Subjects were genotyped for rs429358 and rs7412 SNPs to determine APOE status. Fold levels of human APOE mRNA were assayed in (A) temporal and (B) occipital tissues by real-time RT-PCR using TaqMan technology and calculated relative the geometric mean of GAPDH- and PPIA- mRNAs reference control using the 2-ΔΔCt method. The expression levels between e3/4 (rs429358-TC) and e3/3 (rs429358-TT) were compared. The values presented here are means levels ± SE adjusted for age, gender, PMI, and Braak and Braak stage. 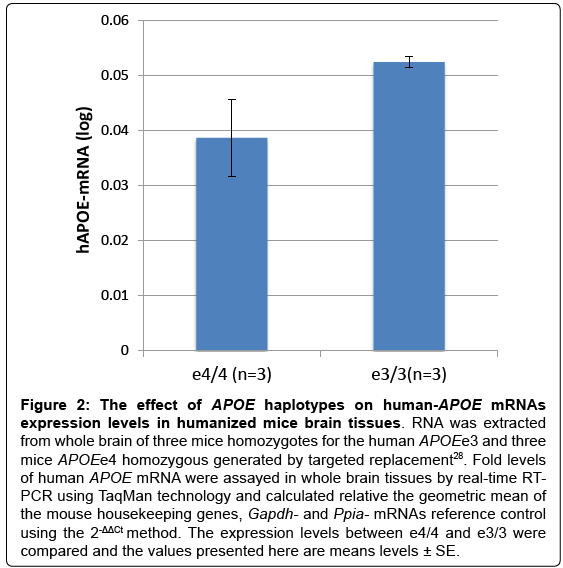 Different factors may regulate APOE gene expression including, but not limited to, genetic [12,29-31] and epigenetic [32] mechanisms. Cis-genetic variably on the background of the e3 haplotype contributes to differential APOE gene expression. We reported data showing that 523- polyT genotype, located upstream of APOE within the adjutant TOMM40 locus, affects expression of genes in APOE LD region [12]. We demonstrated that the LOAD risk allele, very long (‘VL’), is associated with increased levels of APOE transcripts in normal and LOADaffected human brain tissues and with higher luciferase expression in a cell-based reporter system, compared to the short (‘S’) allele [12]. These observations provide a possible explanation for the genetic association of the 523-polyT locus with age of LOAD onset [33,34] and other disease related phenotypes [35-38]. Our observations were recently reproduced by Payton, et al. They showed that the shorter length poly-T variants act as a repressor of luciferase gene expression in reporter gene constructs, whereas expression was reduced to approximately half of that observed for the ‘VL’ variant [39].

Collectively the studies reviewed here suggest that up-regulated function of APOE due to either enhanced protein activity or increased APOE expression levels may contribute, in part, to the etiology of LOAD. Figure 3 summarizes our proposed model. While this model suggests the triggering event, the biochemical and cell biological pathways that mediate the consequences of this event are still being determined. Our perception of increased APOEe3 protein levels as a LOAD-pathogenic mechanism agrees with the concept that changes in expression levels of ‘normal’ protein in the brain can lead to neurodegenerative diseases. In conclusion, genetic heterogeneity across the APOE-LD region may lead, through different molecular mechanisms, to elevated (‘pathogenic’) ApoE function and possibly explains the extremely strong genetic association of the APOE-LD region with increased LOAD-risk and related phenotypes.

Figure 3: A schematic model describing factors leading to upregulation of ApoE function and the impact on LOAD pathogenesis.