The author thinks that the endless and timeless Universe is a permanent substance and energy flow as well as movement of celestial bodies. Celestial bodies may have physical and biological life. The life of our Earth can be divided into different periods and ages. Its physical life was sterile. Essence of the biological life is the existences of a living unite which is a substantial matrix with a permeable wall which separates it from its environment. Through its wall during its life on and back directed movement of substance and energy exists. Effects of the living unites during their total existence determine the biological life of our planet. Our Earth is a closed system for the living unites. Substantial and energetic processes mainly those which have happened from 1778 on the Earth are analyzed in this paper.

It is supposed that our Galaxy was born more than 10 billion years ago and the age of our solar-system and that of our Earth existing in that system may be 5-4.75 and 4.55 billion years, respectively. They were formed in consequence of the substance and energy flow which had been directed by unknown autonomous law of Nature that is God. Since the birth of our Earth it has lived its own physical life which may be similar to that of the other biological lifeless celestial bodies. The physical life of celestial bodies is not unchanged. All have some common characteristics: birth, movement, atomic processes. Cooling, geological events, regular fluctuation of their temperature, sterile condition and so on.

It is not known that at first what kinds of atoms were present in our glowing Earth besides H2 and him. It is also unknown but there are suppositions when and on which way Carbon, Nitrogen, Oxygen, CO, CO2, water as well as inorganic and later simple organic compounds formed on the lifeless Earth. It is supposed that the first atmosphere around the Earth was a solar type with H2 and him which was followed with an anoxic one which might contain Nitrogen and/or CO, CO2 and so on, before the formation of the recent atmosphere. In the absence of O2 there was not burning, therefore CO, CO2 and H2O could not be formed on that way.

It is also sure that fluid water appeared only when the surface of the Earth was already solid and its temperature and the atmospheric pressure were convenient for its formation. It is not known whether bond-water and water vapor had already been there before. The appearance of fluid water was a very important event from the point of view of chemical and later biological processes and the water circulation.

After the birth of our Earth unknown substantial and energetic processes of 0.85-0.75 billion years long had existed at the end of which the biological life appeared. Its formation is not known but it is a fact that the first living organism could form and live only in fluid water containing the necessary dissolved inorganic and organic substances.

But what is Biological Life and what is its Aim?

Biological life is a special energetic and substantial phenomenon of a living unit which lasts till its own death. The living unit is a substantial matrix which is bordered by a permeable membrane/wall. Inside that unit and through its membrane/wall an organized and directed energy and substance transport flows. The living unit is affected by the external effects and it can accommodate to those only within the borders of its own life requirements. In the same time it influences on its environment, too.

The living unit can change as well as multiply and its characteristics are bequeathed into its posterities. Substantial and energetic conditions of biological life were studied by E. Schrödinger and A. Katsuki. They stated that living unit needed environment of low entropy because consumption of compounds of low entropy which were essential for its life was only possible in such circumstance. Convenient condition of entropy of our Earth has been ensured by the circulation of water. We do not know when, how and why did the circulation start.

On the basis of our present knowledge the living unit is only present in the Biosphere of our Earth which is a closed system for it. In the case of any kind of closed systems- for example in case of a mass cultivation of a microorganism- it is obligatory permanently to ensure those conditions which are necessary for a continuous biological life and reproduction of the living unit.

As for the characteristics of the first living unit it might have been a pluripotent archaic type microbe without nucleus. Its metabolism might be chemotrophic/autotrophic but what was its energetic background it is unknown for us. At present we know that such microorganisms have also lived which can survive a temperature more than 100°C and an atmospheric pressure more than 1 bar. Without microorganisms there is not life on our planet.

Since the appearance of microorganisms the sterility disappeared and they have influenced on the original condition as well as substantial and energetic processes of our Earth by their activities. The microorganisms during their metabolism have started to decompose and transform inorganic substances of our Earth and have produced different types of inorganic as well as organic compounds, gases and heat. The compounds stored chemical energy. Their cells became the first organic mud of waters and complex organic components of ground. They formed the first ecosystem/microbiome too.

After some time phototrophic microorganisms (that is the first plants) appeared and the use of solar energy as well as production of free O2 have started. We do not know whether free O2 existed before. Fixation of CO2 during metabolism of phototrophic organisms and production of organic compounds in their cells have meant a shorter or longer fixation of solar energy till their decomposition/burning.

Therefore living organisms play an important role in the energetic and substantial processes of our Earth. The appearance of free O2 gave the possibility for aerobic respiration and for formation of the animal world the members of which- except carnivorous ones- consume plants to get the substances and energy which are necessary for their life. As a result of this evolutionary process the first man appeared some million years before.

Finally what is the aim of the biological life? We think that it is neither more nor less than the posterity. We think that the life of our Earth can be divided into different periods. It is necessary to know about these periods because each of them had/have special energetic and substantial processes which had/have biological consequences and vice versa. These periods are the following: The first period was the physical life of our Earth, which can be characterized by sterile condition as well as physical, geomorphological and some chemical events depending on the presence of fluid water.

The second period has been its biological life. That period can also be divided into two parts.

The first part lasted till the appearance of the first man. That period of time can be described by natural biological processes and by their consequences besides those lifeless effects which are permanent and determined the earlier physical life of our planet as well. No unnatural event had happened and the evolution proceeded.

The second part of the biological life of our Earth started with the appearance of the first man and it can be characterized by the effects of men of growing number and by the consequences of their concise activities as well as the use of fire together with all former but continuously existing influencing factors. It is natural that genetic changes in living organisms have not stopped in this part either. Now we shall deal with the substantial and energetic data of a very short period of the biological life of our Earth which started in 1778. 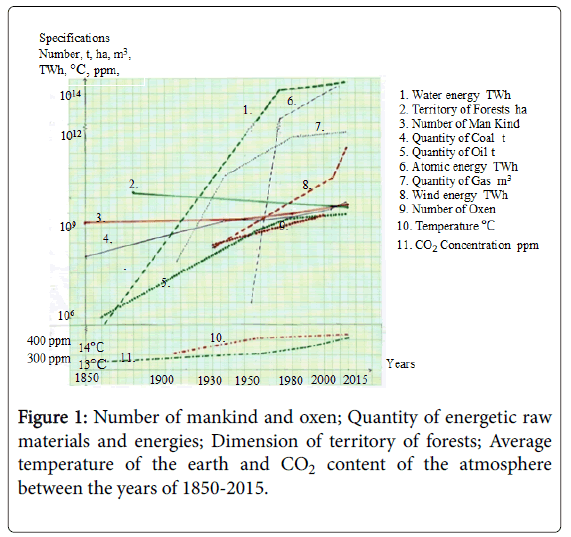 Figure 1: Number of mankind and oxen; Quantity of energetic raw materials and energies; Dimension of territory of forests; Average temperature of the earth and CO2 content of the atmosphere between the years of 1850-2015.

The Table 1 contains the detailed data of the chanrges presented in Figure 1. That is the mass of fuels used and their average thermal values as well as the quantity of CO2 liberated from the fuels; the values of other energies; the number and emissions of mankind and oxen at different points of time. The changes are very important in comparison with the substantial and energetic situation of the earlier periods- e.g. before the appearance of biological life or that of the first man or when the industrial revolution started. Causes and consequences of the changes can roughly be summarized in three points.

The first point contains the number, requirements and activities of human beings and farm animals in a closed system- for example the use of fire that is liberation of energies; the environmental effects of industrial, agricultural (especially animal breeding of industrial), transport, military, communal and scientific events; philosophy of profit and endless wishes of men.

Into the second point alteration of the surface of our Earth can be listed. Its natural surface has been modified by buildings, roads, deforestation, mines, farming lands, reservoirs and contamination of surface waters. These changes have modified the original possibilities of absorption, adsorption, reflection and utilization of solar energy and the heat radiation of the Earth. Besides they have great many unpleasant ecological consequences, too.

Contaminants- as CO2 and other gases, vapors, dusts and movement of aircraft and rockets- belong to the third point. They have influenced on the composition and condition of the atmosphere of our Earth in consequence of which original way of arrival of solar energy, that of leaving of heat as well as the former climate have been modified. The problem is that the alterations have permanently grown and in consequence of that the condition of our closed Biosphere has worsened. Perhaps there is still time enough to save the biological life, but for that it is necessary to order drastic restrictions immediately.

*Note: This paper was prepared on the basis of the lecture presented on the Veterinary University of Budapest (an ATE BK CT Meeting) at 2nd March, 2017; on the “1st International Conference on Community Ecology” Budapest at 28-29 September, 2017; on the “International Congress on Microbial & Biochemical Research and Technologies” and “Global Applied Microbiology Conference” (video presentation) Toronto at 18-19 October, 2017 and on “5th Central European Forum for Microbiology” Keszthely at 18-20 October, 2017.

Citation: Ralovich B (2017) Thoughts from the Effects of Biological Life and Mankind on the Earth. J Ecol Toxicol 1:108.

Copyright: © 2017 Ralovich B. This is an open-access article distributed under the terms of the Creative Commons Attribution License, which permits unrestricted use, distribution, and reproduction in any medium, provided the original author and source are credited.