Copyright: © 2017 Naganathan S, et al. This is an open-access article distributed under the terms of the Creative Commons Attribution License, which permits unrestricted use, distribution, and reproduction in any medium, provided the original author and source are credited.

Cavo Portal Hemi-Transposition (CPHT) is a surgical technique used in liver transplantation (LT) to salvage low portal perfusion situations. Although non physiological it is an established surgical technique for over two decades for the aforementioned clinical situation. CPHT also may fail. Our patient was a 6 months old male child with decompensated cirrhosis secondary to extra hepatic biliary atresia. Intraoperatively there was recurrent thrombosis of portal vein anastomosis. Hence portal flow of the graft was salvaged by CPHT. However, in the immediate postoperative period there was thrombosis of CPHT. Emergency angiography and stenting of CPHT was done. At 3 years post LT the child has stable graft function and good quality of life. This is the first case of this kind to be reported in the literature.

Liver transplantation is the gold standard for end stage liver disease [1]. Liver transplantation is of two types based on the organ source. Living Donor Liver Transplantation (LDLT) and Deceased Donor Liver Transplantation (DDLT). Organ shortage has led to the evolution of LDLT [2]. LDLT is a technically challenging operation [3]. In pediatric cases LDLT is the preferred modality. Problems specific to pediatric LDLT are large for size graft and higher incidence of Hepatic Artery Thrombosis (HAT) [4]. Various refinements in techniques have been described to avoid these complications. We describe one such case which we encountered 3 years ago. Secondary too large for size graft there was recurrent PVT. Hence CPHT was done. But CPHT also got thrombosed in the immediate post-operative period. This was salvaged by Digital Subtraction Angiography (DSA) and selfexpanding metallic stent (SEMS). At 3 years post transplantation the child is having good graft function. Till today there is no case report of this sort in the literature. We wanted to report this case because of its novelty.

Our patient was 6 months old male child born out of nonconsanguineous parents via Lower section caesarean section (LSCS) in view of breach presentation. He had jaundice in the neonatal period which was progressively deepening. He had acholic stools with turmeric colored urine. Ultrasonography (USG) liver Doppler showed enlarged nodular liver with multiple collaterals, gall bladder and common bile duct could not be visualized, mild ascites, splenomegaly and umbilical hernia. Portal vein diameter was 5 mm. Hydroxy Immuno Diacetic Acid (HIDA) scan showed adequate hepatic function with non-visualization of intestinal activity even after 48 hours. Liver biopsy showed Extra Hepatic Biliary Atresia (EHBA) with cirrhosis. Pediatric End Stage Liver Disease (PELD) score was 23. He was advised for primary liver transplantation in view of better prognosis in comparison to Kasai procedure and Post Kasai-LT. After completion of liver transplantation work up he was taken up for LDLT.

The baby underwent LDLT on September 17, 2013. Left lateral segment graft of 232 gm was harvested from the donor. This was 52 gm more than the predicted weight. Graft reduction was not done because of lack of technical expertise at that time. Implantation was done by complete caval cross clamping. Left Hepatic Vein (LHV) was anastomosed to the cava. Reperfusion was done after completion of portal vein anastomosis. Graft hepatic artery was anastomosed to the Left Hepatic Artery (LHA). Intra operative Doppler revealed triphasic outflow with portal flow of 650 ml/min. Biliary reconstruction was done by Roux-en-Y hepatico-jejunostomy (RYHJ). In view of unexpectedly large graft the abdomen could not be closed primarily hence 2-0 proline mesh was used for approximation of sheath for tension free closure. USG liver Doppler done after abdominal closure revealed portal vein thrombosis. Hence the abdomen was immediately reopened, portal venous anastomosis dismantled, thrombectomy was done and flow was reestablished. However, there was recurrent portal vein thrombosis after abdominal closure. Hence CPHT was done. Portal flow was adequate. Abdomen was closed with a mesh. USG liver Doppler after abdominal closure revealed good portal flow. Hence the child was shifted to the ICU and electively ventilated overnight. 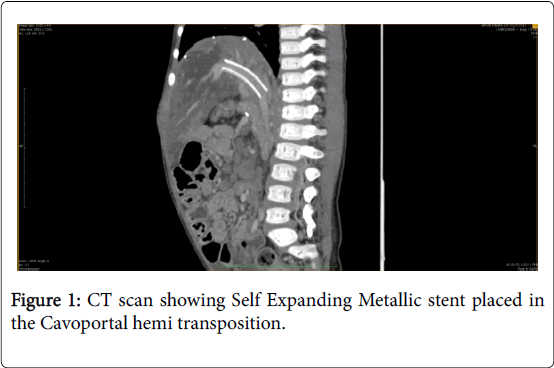 Baby was extubated on POD2. His peak Bilirubin was 2.6 on POD1 and peak INR was 2.9 on POD1. He was allowed orally on POD3. His blood culture was positive for E. coli and was sensitive to polymyxin-B. Explant histopathology was suggestive of secondary biliary cirrhosis (SBC) secondary to EHBA. Patient developed diarrhea on POD10 and was managed with anti-diarrheal treatment. He had an episode of acute cellular rejection on POD12. He responded to pulse dose steroids. He was discharged home on 34th POD.

He was on regular follow-up since then. At 30 months post transplantation the child was admitted with an episode of hematemesis. He was managed by Upper Gastrointestinal endoscopy (UGIE) and banding of esophageal varices. On subsequent follow-up (36 months post LT at the time of writing this paper) the child was doing well with good graft liver function.

Pediatric LT has higher incidence of technical complications compared to the adult LDLT [5]. Though, with technical perfection most of the transplantation centers have overcome this problem. However, low volume centers continue to have higher complication rates. Large for size syndrome is a clinical situation specific to pediatric liver transplantation [6]. This can lead to difficult abdominal closure and graft compression leading to vascular complications like PVT and HAT. PVT in pediatric LDLT can have multiple etiologies. Some of them are Porto-caval shunts, atretic portal vein, large for size graft, difficult abdominal closure, low perfusion states in the post-operative period and hypercoagulable states [7]. Post LT, PVT is associated with higher mortality rates. Various techniques employed to prevent portal vein thrombosis are hyper-reduction of grafts, having a good outflow of the graft, avoiding primary closure of the abdomen, identification and ligation of shunts if any, anastomosing at the splenic vein + superior mesenteric vein junction so as to have widest possible anastomosis and use of anticoagulation in the post-operative period. In spite of all these preventive measures the portal flow can still be low [8]. In such situations non physiological operations like arterialization of portal vein, Reno-portal anastomosis, cavoportal hemi transposition are employed to salvage the graft. The surgical challenges of pediatric LT are enumerated in Table 1.

In general, there are higher incidence of HAT and large for size syndromes in pediatric transplantation compared to adult LT [2]. The problem which we encountered in our patient was secondary to inadverant Large for size graft. This led to two issues:

2) Difficult abdominal closure because of mismatch in the size of graft and size of abdominal cavity. In pediatric LT the acceptable maximum limit of GRWR is 3. This is achieved by:

c) Graft reduction before retrieval and in the back-table to achieve optimum weight.

In spite of adequate precautions portal flow can still be low [9]. Various surgical techniques are described in the literature to salvage such situation. They are identification and ligation of porto-caval shunts if any, reno-portal shunt, arterio-portal shunt and CPHT [10]. In our case the unexpectedly excess weight of 50 gm in the graft lead to subsequent complications. Thrombosis occurred overnight because of hemodynamic instability. Since the graft had already suffered long warm ischemia times during primary surgery another surgical intervention would have been a huge hit on the recovery of the child. Also in surgical thrombectomy the RYHJ has to be taken down to do thrombectomy and revascularization. This may lead to future biliary complications also. Hence, we decided for DSA approach. More over at DSA in addition to thrombolysis a SEMS was also placed. It prevented recurrence of thrombosis. 2) Flush cutting of portal vein to keep the periportal connective tissue around the vein which acts as a scaffold and prevents twisting and collapsing of the veins.

3) Use the right portal vein, left portal vein junction for the anastomosis thereby averting the size mismatch between the donor and recipient portal veins (Figure 3). We wanted to highlight that even cavoportal anastomosis is not 100% safe against thrombosis but is an effective alternative to tide over the crisis. At 3 years post LT the child is doing well except for persistent portal hypertension. 6 months ago the child presented with an episode of UGIH. It was successfully managed with the UGIE and EVL. Regarding the SEMS it was 10 mm at the time of deployment and is dilatable if needed in the future by means of balloon dilatation.

Thus we conclude from our study that:

1. Portal vein thrombosis incidence is higher in pediatric transplantation than in adult cases.

3. CPHT is a good alternative to salvage the situation though not 100% safe.

4. We describe the first case of successful DSA and stenting of thrombosed CPHT.