Tibia Dome-Shaped Osteotomy for a Valgus Deformity in a Ball-and- Socket Ankle Joint: A Case Report

Copyright: © 2013 Colin F, et al. This is an open-access article distributed under the terms of the Creative Commons Attribution License, which permits unrestricted use, distribution, and reproduction in any medium, provided the original author and source are credited.

We report the case of a 64 year-old man with a painful left ankle valgus instability. The instability was associated with a ball-and-socket ankle joint due to a congenital tarsal coalition. A dome-shaped osteotomy was done of the tibia and an additional osteotomy of the fibula to rebalance the ankle joint complex. At mid-term, the ankle joint remained stable, and the patient was pain free. We demonstrate here that a dome-shaped like osteotomy is a powerful tool to rebalance a severely unstable ball-and-socket ankle joint.

A ball-and-socket ankle is an abnormal configuration of the ankle joint. It is characterized by a spherical shape of the ankle mortise in which the articular surface of the talus is hemispherical and has a congruent, concave tibial articular surface. The first description of this deformity was reported 1931 in German by Politzer [1] and 1958 in English by Lamb [2].

A ball-and-socket ankle is an uncommon deformity, which is associated with congenital anomalies such as shortening of the limb, hypoplasia of the fibula (fibular hemimelia), tarsal coalition and absent or fused foot rays [3-5]. Sixty five percent of the patients with a ball-and-socket ankle joint (BSAJ) have associated tarsal coalitions [6]. The etiology of BSAJ associated with tarsal coalition has been a subject of debate [1,2,7,8], in particular with regard to whether it is a primary or secondary deformity [9]. The main argument for it being a secondary acquired deformity is the fact of a limitation of motion of the subtalar and midtarsal joints (tarsal coalitions). Nowadays this is the most commonly accepted theory [9,10]. Patients with severe tarsal coalition develop a BSAJ appearance during the first five years of life [9] and progressively adopt a typical rigid planovalgus deformity with flattening of the medial arch and abduction of the forefoot, to compensate the lack of internal rotation of the subtalar joint [11,12]. Adult coalitions and BSAJ concern patients with an average age of 40 and are often asymptomatic but can become symptomatic after trauma, strenuous activity or can be discovered by chance while treating an unrelated foot or ankle problem [13-15].

We report the case of a 64 years-old man with a severely unstable and painful valgus deformity in the presence of a bilateral ball-andsocket ankle joint associated to a congenital tarsal coalition.

A 64-years-old sedentary man came with a severe lateral ankle pain on his left foot after an acute eversion trauma. Post-traumatically, he has not been able to walk without crutches. He reported that he was treated during childhood with foot orthosis for bilateral tarsal coalition and a metatarsal osteotomy for a bunion when he was 18 years old. On physical examination, there was a severe fixed planovalgus deformity with a flattening of the medial arch and forefoot abduction (Figure 1). The ankle ROM was 10 degrees in dorsiflexion and 20 degrees in plantarflexion; ROM for eversion/inversion was limited to zero. There was a severe subfibular pain on palpation, which increased while the foot was manipulated into dorsiflexion and plantarflexion. Calculated AOFAS hindfoot score was 17 points. 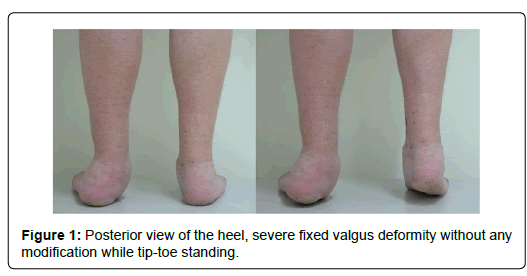 Figure 1: Posterior view of the heel, severe fixed valgus deformity without any modification while tip-toe standing.

Weight bearing radiographs evidenced a bilateral BSAJ with symmetric tarsal coalition, severe valgus deformity with a calcaneusoffset measured at 27 mm on the Saltzman view [16] and fibulars impingement on the lateral side. On the AP view, the malleoli were at the same level (Figure 2). 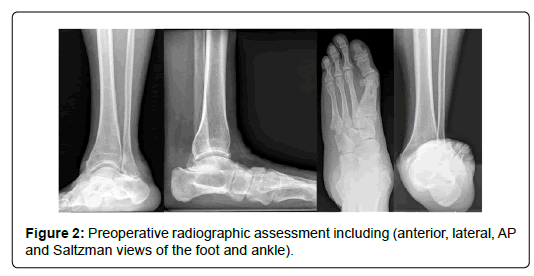 Figure 2: Preoperative radiographic assessment including (anterior, lateral, AP and Saltzman views of the foot and ankle). 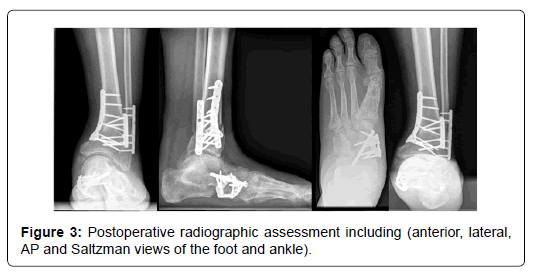 Figure 3: Postoperative radiographic assessment including (anterior, lateral, AP and Saltzman views of the foot and ankle).

The procedure was performed with patient supine and under spinal anesthesia. A thigh tourniquet was used. First, an oblique osteotomy of fibula was performed through a lateral approach. Then, the distal tibia was exposed through an anterior approach. The dome osteotomy was planned 3 cm above the ankle joint. A plate was fixed by a screw at the center of the very distal tibia, and a 3 cm hole further proximally was used as a compass joint for drilling multiple holes with a 2.5 mm drill. The osteotomy was completed with a chisel. A special distractor (Hintermann distractor, Newdeal/Integra, Lyon/Plainsboro) was mounted on anterolateral side and used to progressively move the distal tibia into valgus until the desired position was achieved. Overall correction was approximately 30 degrees. Rigid fixation was achieved with two locking plates (Tibiaxis®, Newdeal/Integra, Lyon/Plainsboro). Finally, the fibula was fixed in the position as given by the correction. An additional arthrodesis of the naviculocuneiform joints was done to correct the forefoot supination and achieve a stable plantigrad forefoot (Figure 3). 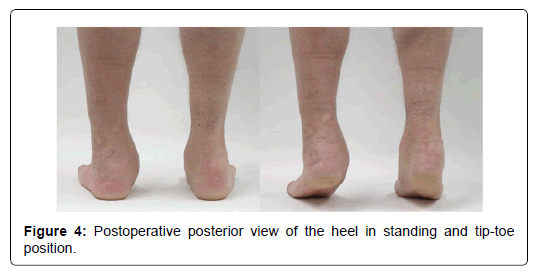 Figure 4: Postoperative posterior view of the heel in standing and tip-toe position.

A splint was used to protect the hindfoot for 3 days. Then, a scotch cast was applied with the foot in neutral position for 8 weeks. Partial weight bearing was allowed in the cast for 4 weeks, followed by weight bearing as tolerated (Figure 4).

Postoperative outcome was uneventful. Radiographically, the osteotomy was healed after 8 weeks. At the latest follow-up of 2 years, the patient was pain free and completely satisfied. He was able to walk without any support and normal shoes more than 2 km a day. The AOFAS hindfoot score was 78 points. The radiological assessment showed a stable position with a calcaneus offset measured at 6mm in varus, the mortise shape was restored and the height difference between the malleoli related to the floor was measured at 26 mm on the frontal view (Figure 3).

BSAJ is not an uncommon finding in asymptomatic feet [7,17], some patients complain about recurrent ankle sprains, persistent invalidating lateral pain, and continuous orthotic need [3,18,19]. Little information is available with regard to surgical treatment [20]. To our knowledge, this is the first report on a BSAJ secondary to an extensive tarsal coalition in an adult patient with severe symptomatic valgus deformity that was corrected with a dome-shaped supramalleolar osteotomy.

While most publications focus on the etiology of BSAJ [1-4,6-10,17,21-24], very little data exists for the management of this deformity. Recently, Myerson et al. reported 9 cases of medial closing wedge supramalleolar osteotomy in BSAJ deformities with extensive coalition showing promising clinical outcome [20]. This surgical procedure reduces the lateral fibular impingement and normalizes the pressure on the ankle joint in early and mid-stage ankle osteoarthritis [25]. They mentioned that triple arthrodesis usually performed on this deformity increases stiffness and addresses the deformity distal to the center of rotation and angulation [20]. Thus, it is usually not sufficient to only correct the misalignment. Medial closing wedge osteotomy is obviously a reliable and effective procedure in BSAJ however, the senior author recommends to perform a dome-shaped osteotomy to correct deformities over 10 degrees. There are several advantages when using this method: first, there is the presence of a maximal bone contact area, which results in a stable construct allowing for early weight bearing, secondly, the avoidance of bone removal limits the risk of a resulting leg shortening, and last but not least, a wide contact area at the metaphyseal level allows for fast and reliable bone healing. On patients with BSAJ, the fibula is often relatively short and contributes to the progressive hindfoot deformity and lateral impingement. Treating BSAJ using a rotational type of osteotomy on the tibial side allows the lengthening of the fibula.

This case has illustrated the importance of osseous balancing in getting a stable ankle joint complex in a BSAJ deformity where articular surfaces do not contribute to coronal plane stability. Supramalleolar osteotomy enabled us to normalize the load transmission through the ankle joint. However, it has to be questioned to which extent the arthrodesis of the naviculo-cuneiform joint contributed to the overall stability. In the case of acquired flatfoot deformity, correction of forefoot supination might be crucial in getting a stable ankle joint complex. In any case, we have shown that there is no need of any soft tissue procedure to achieve this goal. This finding is of outmost importance as soft tissue reconstruction might be a conflicting problem in a congenital deformed foot and ankle where gross anatomy has been significantly changed.

In conclusion, this case has emphasized the crucial role of osseous balancing in treatment of highly unstable BSAJ. A dome-shaped osteotomy of the distal tibia enables such a correction by allowing the rotation of the distal tibia into varus, and simultaneously elongating the fibula to an appropriate length and position. Further procedures to correct a forefoot supination should be considered in addition to get a stable foot and ankle in a long-term view.