One of the recent global issues is global warming, the increase in average atmospheric temperature that negatively impacts the dynamic of global climate pattern [1]. Global warming is the consequence of human developmental activities which started during the industrial revolution period 1760 [2]. Anthropogenic activities released greenhouse gases such as carbon dioxide, nitrogen dioxide, methane, ozone, fluorocarbons, water vapour, sulphur dioxide, into the atmosphere. Among the gases, carbon dioxide is the main influencing gas for global warming. Prior to industrial revolution the concentration of atmospheric carbon dioxide was around 270 ppm, and its concentration in atmosphere is increasing rapidly [3]. The current concentration of the gas in the atmosphere is 400 ppm [4], and it is estimated that by 2070 the concentration will reach up to 500 ppm [5]. Air pollution and climate change are interlinked [6]. Scientists have predicted that by 2100 the mean global surface temperature will increase by 1-3.5°C [7]. Climate change will create additional challenges for forest management with substantial socio-economic and biological impacts [8].

The effects of global warming include, rising sea level, melting of glaciers and ice sheets, increase in temperature over land and sea surface, ocean acidification. Change in flowering and fruiting phenology of plants, shift in movement of fishes and animals [9]. In recent years, global warming and climate change even have out broken new catastrophic diseases that spread very fast worldwide [10].

Mitigation of greenhouse gases is the prime role in controlling global warming. There are lots of carbon sinks such as forests, soils, oceans that store carbon compounds for a long period. Trees are an important component of forest carbon sinks that play a vital role in global carbon cycle [1]. They fix the atmospheric carbon in the form of wood biomass [11]. During photosynthesis, trees intake the carbon dioxide gas and store it as biomass during the growth process [12].

Monitoring and management of earth’s carbon emission is most important for curbing the extra amount of carbon released. Concentration of carbon dioxide in a region depends on the carbon emission and sinking sources of that area. Quantification of carbon storage in forest systems have attracted scientist worldwide, and a lot of studies have been carried out so far [1-3,12-15].

The present study was carried out from the Shervarayan hills located in Tamil Nadu, India (Figure 1). The study area covers about 430 km2, and is composed of masses of Charnockite associated with gneiss and varied metamorphic rocks. The soil is red, loamy and lateritic. The climate data of this region reveals that the mean annual temperature is 28.3°C and the mean annual rainfall is 1058 mm [16]. 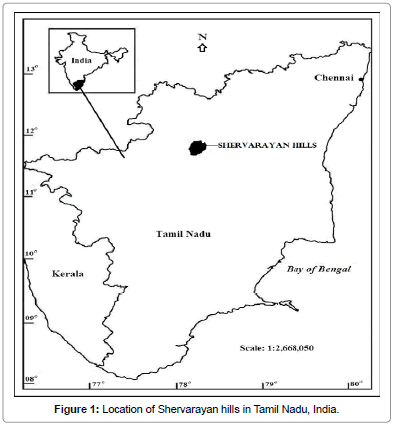 Where ‘AGB’ is aboveground biomass, ‘BGB’ is below ground biomass, and ‘0.5’ is the conversion factor which represents that the carbon content is assumed as 50% of the total biomass as followed by Takimoto [17], Khan [18], Sundarapandian [19].

Below ground biomass was calculated considering 15% of the aboveground biomass as followed earlier by Pragasan [13], Pragasan and Karthick [14], MacDicken [26] and Alamgir and Al-Amin [27].

The vegetation of the 14 transects was classified into three forest types viz. semi-evergreen, mixed deciduous and scrub forests. Based on tree girth, 11 tree size (GBH) classes were recognized. Analysis of Variance (ANOVA) was performed to check the significance of variation in total carbon stock among the three forest types and among the 11 tree size (GBH) classes. Regression analysis was used to test the relationship between total carbon stock and tree density, tree diversity and altitude of forest location.

Total carbon stock estimated for the 14 transects sampled from the study area was 395.83 tonnes. The mean carbon stock per transect was 56.55 ± 12.28 t/ha and it ranged from 3.03 to 158.91 t/ha. Of the total 165 species recorded from a sum of seven hectares, the tree species Syzygium cumini shared maximum carbon stock 37.44 tonnes followed by Anogeissus latifolia, Prumus ceylanica, Terminalia paniculata and Tamarindus indica (Table 1). 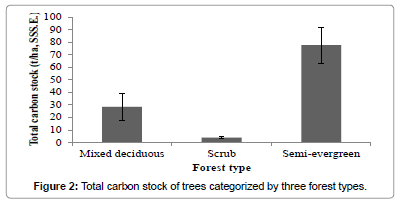 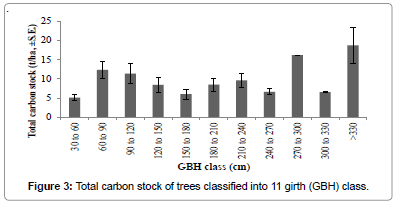 Regression analysis revealed that tree carbon stock had a strong positive relationship with altitude (Figure 4), but not with tree diversity (Figure 5) and density (Figure 6). 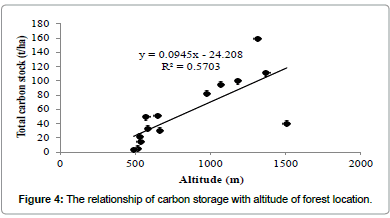 Figure 4: The relationship of carbon storage with altitude of forest location. 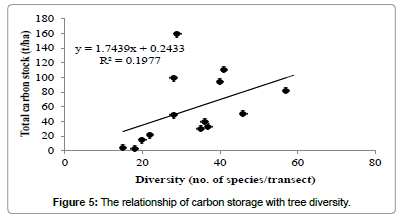 Figure 5: The relationship of carbon storage with tree diversity. 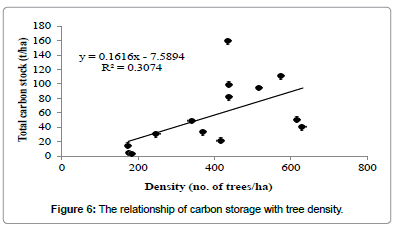 Figure 6: The relationship of carbon storage with tree density.

Carbon stock assessments in forest vegetation have been carried out for many regions worldwide (Table 2). In the present study, the nondestructive sampling method was adopted considering biodiversity conservation in Shervarayan hills. The carbon stock of Shervarayan hills (56.55 ± 12.28 t/ha) is low when compared to other regions listed in Table 2. It is almost ten times greater than the tropical evergreen forest (5.75 t/ha) in Myanmar and five times lesser than the tropical moist evergreen forests (299 t/ha) in Sri Lanka. Also, it is almost 50% less than the average carbon stock value (118.73 t/ha) calculated for forests of a few regions listed in Table 2.

Table 2: Total carbon stock (TCS, t/ha) of tree vegetation of some of the forests around the world.

Like most of the hill forests in India, Shervarayan is also threatened from the impacts of anthropogenic activities such as forest land encroachment for agriculture, modification of forest cover for construction of roads, rock and sand mines, illegal felling of timber trees, besides the influence of invasive weed species Lantana camara. Hence, proper management of the hill forest is highly recommended. Further, tree plantation programs in degraded forest lands, and awareness programs to educate the local people are of necessary activities to help conserve forests and stock maximum atmospheric carbon in the tree vegetation.

In conclusion, the present study reveals the importance of quantification of carbon stock of forest vegetation, for better management of the forest ecosystem in view of reducing the excess atmospheric carbon dioxide gas, and thereby to help mitigation of global warming and climate change. Monitoring of forest carbon stock is necessary to address the future problems. Further, development of new innovative methodology is of immense need for quantification of carbon stock with great accuracy.

I sincerely thank Dr. N. Parthasarathy, Professor of Ecology and Environmental Sciences, Pondicherry University, Puducherry, for all his support and encouragements.

Copyright: ©2015 Pragasan LA. This is an open-access article distributed under the terms of the Creative Commons Attribution License, which permits unrestricted use, distribution, and reproduction in any medium, provided the original author and source are credited.