Copyright: © 2016 Caillaud D, et al. This is an open-access article distributed under the terms of the Creative Commons Attribution License, which permits unrestricted use, distribution, and reproduction in any medium, provided the original author and source are credited.

Background: Sarcoid reactions to benign tumors are an exception. Only two cases have been reported where these reactions were associated with a benign teratoma. We report a new case where a sarcoid reaction is secondary to a thoracic schwannoma.

Conclusion: In case of thoracic schwannoma, a sarcoid reaction must be considered if mediastinal lymph nodes are present. Other similar cases are necessary to confirm the validity of this case report.

Sarcoidosis is a multisystemic granulomatous disorder characterized by non caseating granulomas, of undetermined etiology, with bilateral mediastinal lymphadenopathy, pulmonary infiltration, ocular and skin lesions or some combination of these findings [1].

Malignant tumor-related tissue reactions resulting in the formation of epithelioid-cell granulomas have been termed sarcoid reactions. Sarcoid reactions are not exceptional and occur in 4.4% of carcinomas, 13.8% of patients with Hodgkin diseases, and in 7.3% of cases of non- Hodgkin lymphomas [2].

A 53 year-old man with unilateral posterior uveitis was referred to the pulmonary department, for a small retrocardiac mass found on a routine chest radiograph performed for potential sarcoidosis. He had no previous respiratory problems and never smoked.

In the clinic, a physical examination revealed a heart rate of 72 beats/min, a BP of 130/80 mmHg, and a room oxygen saturation of 94%. Pulmonary examination was normal. 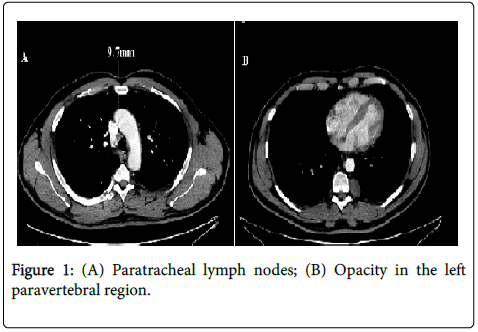 Figure 1: (A) Paratracheal lymph nodes; (B) Opacity in the left paravertebral region.

Bronchoscopy and systematic bronchial biopsies were normal. A pulmonary function test revealed an FEV1 of 4.27 L (120% predicted), and FVC of 5.10 L (107% predicted), and a normal diffusing capacity.

Costovertebral opacity was resected by left thoracoscopy, and histological examination revealed a schwannoma without evidence of malignancy (Figure 2). Due to the presence of micro-granules, a lung biopsy was performed on the lower left lobe; specifically on the lower left visceral and mediastinal pleura next to the ascending aorta and the posterior costal pleura. 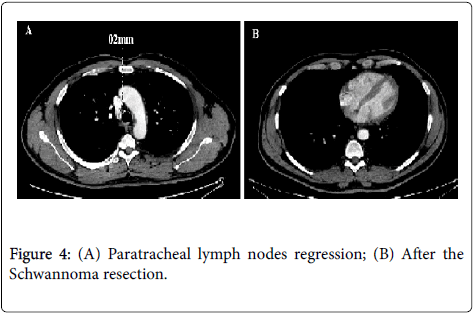 Figure 4: (A) Paratracheal lymph nodes regression; (B) After the Schwannoma resection.

This is a fortuitous discovery of a hilar-mediastinal sarcoid reaction to benign schwannoma during a uveitis assessment.

Sarcoid reaction incidence to cancers has been reported in 2.4 to 3% of cases. They may be interpreted as a defense reaction against a tumor’s antigens, and may have a more favorable prognosis than classical malignant nodes. The appearance of lymph nodes in a patient with a cancer history must first suggest a tumor progression. However, a sarcoid reaction possibility must be kept in mind by clinicians and oncologists because the therapeutic strategy and prognosis are radically different.

Sarcoid reactions to benign tumors, in contrast, are very rare and only two cases have been reported. The first case described in the literature [3], was a young man who exhibited signs and symptoms suggesting an acute myocardial infarction, and was thrombolyzed, but subsequently died. Post-mortem examination revealed a massive pericardial effusion and necrosis involving a mature teratoma of the mediastinum associated with sarcoid reaction. Gary-Rustom et al. [4] reported a second case of mature intra thymic teratoma associated with granulomatous sarcoid-like reaction. Mediastinal mature teratomas are benign and usually asymptomatic.

Benign schwannoma are the most common benign tumors of the peripheral nerves [5]. They are encapsulated lesions rarely causing neurological deficits, mainly in posterior mediastinal locations. Our case is the first to report a sarcoid reaction to this benign tumor. The regression of hilar and mediastinal lymph nodes without medical treatment after Schwannoma resection appears to establish a causal link.

In case of a thoracic schwannoma with mediastinal and hilar lymph nodes, the possibility of a sarcoid reaction must be considered. However, other cases are needed to confirm this first case report.