Transparency in Journals on Animal Models of Lung Disease

Transparency in Journals on Animal Models of Lung Disease

For centuries, animals have been used to describe normal physiological and pathophysiological processes of human diseases, as well as to perform safety and efficacy tests of pulmonary therapies. In the field of lung research, much of our physiological and pathological knowledge has been obtained from studies with different animal species [1-3]. In biomedical research, different animal models have been developed to study human lung disorders ranging from pneumonia [4], acute lung injury [5], chronic obstructive pulmonary disease [6], pulmonary fibrosis [7] and pulmonary hypertension [8]. All these models have led to a great advance of discoveries from the academic laboratories to the patient bed in clinics. It is well known that no experimental model faithfully reproduces the peculiarities of each of the pulmonary diseases, but they provide an invaluable aid in elucidating their mechanistic features, as well as in testing their possible treatments. Anatomical and physiological differences between humans and animals are the main reasons that complicate the interpretation of the findings from animal tests. However, there are powerful advantages for its use, such as: the facility to reproduce and maintain animal colonies, its relatively short half-life that allows for longitudinal studies as function of time, the application of simple and standardized experimental procedures, and, in the last years, the establishment of genetically modified models of lung disease to clarify the function of genes and their influence on diseases. Thus, it is not surprising that in recent years there has been an almost 4-fold increase in the number of scientific articles using animal models published in journals in the area (Figure 1). 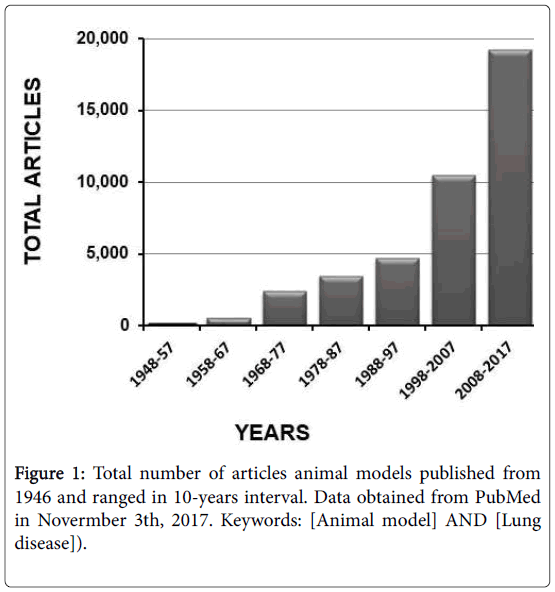 From the first Greek physicians, the experiments with animals have founded the understanding of anatomy, physiology, pathology and pharmacology. As early as the XIIth century, the Arab physicians Avenzoar introduced the animal testing as a method to verify new surgical procedures before applying to patients. During the XIXth century, the use of animal models began to spread among health professionals with the aim of addressing the clinical and therapeutic problems in a new way. One of the main precursors of this new ideology was Claude Bernard, whose teachings postulated that “only adequately and rigorously controlled animal trials could provide reliable information on the physiology and pathology of human diseases” [9]. In the beginning, the application of bloody techniques in animals was performed without any anesthetic or analgesic procedures, which possibly produced the unpleasant sensation among the general public that would lead to the emergence of antivivisectionist positions at the same period. Likewise, and due to the apparent cruelty of these experiments, the "Cruelty to Animals Act" of 1876 in United Kingdom [10] would be the first legislation that protect and regulate the use of animals in research.

In the last century, the improvement of pharmacological knowledge and the availability of a broad and scientifically proven pharmacopoeia, marked a milestone in the defense of the use of animals in biomedical research. Greater and better dissemination of medical advances and the importance of animal-based research produced an increasing advocate number that recognize the importance and validity of the animal models. Thus, from the discovery of antibiotics, insulin, vaccines, vitamins, the use of radiotherapy, to the development of new diagnostic and surgical techniques, there are innumerable areas in which animals have been used in medicine. Of the 106 Nobel Prizes awarded in Physiology or Medicine since 1901, 98 have been directly or indirectly related to animal research. However, opposition to animal experiments would emerge as a new field in the bioethics of the XXth century. Although, the use of rodent species in biomedical research propitiates a transitory lower social pressure because these animals were considered "less morally relevant", and making their use by the general public more acceptable, the public debate on research with animals would be polarized between activists for animal rights and advocates of animal research. Extremist animal rights groups began to resort to terrorist actions. These types of actions will encourage researchers to avoid public speaking about our work, although research in animals with biomedical purposes would be ethically accepted by the community. However, the concept of the animals suffering proved to have an increasing impact on moral community, which would justify the development an ethical balance between the benefit provided by biomedical research and the damage to animal welfare. This need for more human science was recognized and addressed by Russell and Burch in 1959, who postulated the principles that support the human use of animals in scientific research, called the "Three R’s": Replacement, Reduction and Refinement [11]. These concepts postulate that to apply the “best human science”, "the best criterion that we could invent and use is the humanity". In this way, the Replacement was defined as "any scientific method that uses substitution methods of non-sensitive materials that use conscious living vertebrates"; the Reduction was defined as "the decrease in the number of animals used to obtain information in a certain quantity and precision", and the Refinement as the set of measures adopted to "reduce the incidence or severity of the procedures applied to the animals to be used". In this way, it was intended that the researchers could provide solid arguments or convincing evidence of the need for the use of animals [12]. The use of the Three R’s would provide a solid ethical and scientific framework on which researchers; legislators and public communities could be based on arguing and discussing the benefit or harm of the use of animals in biomedicine.

The impact of the three R's during the seventies produced a downward trend in the total number of animals used in research. Since then, the development of genetically modified animal models of diseases has produced an increase in the use of animals in research [13]. In 1999, the Bologna Declaration reaffirmed that "human science is a prerequisite for good science, and is best achieved in relation to procedures in laboratory animals by vigorous promotion and application of the Three Rs" [14]. Currently, European legislation on the protection and use of laboratory animals bases its application and development on the Principal Principle of the Three Rs (Directive 20102010/63/EU). Linked to this growing awareness of the protection, justification and correct use of animals in research, as well as the growing pressure of antivivisectionist groups, the researchers have recognized the need for greater transparency and the use of guidelines to disseminate biomedical research through initiatives such as the Basel Declaration or the use of the ARRIVE guidelines [15,16].

Far from being resolved, the public debate between supporters and critics of the use of animals under investigation is still standing. However, there have been important advances in regard to the protection of animals used in research, as well as the great impact that scientific and public dissemination has on society in general. It is the task of all of us involved in medical research (from authors to reviewers and editors), to demand transparency and quality in the dissemination of results in biomedical journals. While the historical role of animal experiments seems to be indisputable, it is important to continue focusing on the continuous improvement of the laboratory animal welfare, on the development of alternatives to animal testing and on the monitoring of transparency guidelines promoted by the editorial boards and publishers of biomedical journals to achieve the so called "best human science".

Copyright: ©2017 Alvarez FJ. This is an open-access article distributed under the terms of the Creative Commons Attribution License, which permits unrestricted use, distribution, and reproduction in any medium, provided the original author and source are credited.