The main objective of this study was to assess the carbon stock of tree vegetation from the tropical forests of Bodamalai hills located in India. The tree carbon stock determined by non-destructive method was 10.94 ± 3.57 tC/ha, and it ranged from 3.53 tC/ha to 38.92 tC/ha for the ten 0.5 ha transects sampled. The tree species Albizia amara shared maximum carbon stock followed by Ficus benghalensis, Euphorbia antiquorum, Tamarindus indica and Strychnos potatorum. Statistical analysis revealed that the carbon stock (tC/ha) varied significantly (ANOVA: F=22.601, p<0.001) among the three forest types recognized, and the mixed-deciduous forest had high carbon stock 30.81 tC/ha. A significant variation in the distribution of carbon stock was observed between the four tree size classes recognized (F=3.384, p<0.01), and it was found maximum (58%) for the lower size class (30-90 cm girth at breast height). The carbon stock (tC/ha) of tree vegetation of Bodamalai falls within the range reported for other forests worldwide. The influence of factors such as altitudinal gradient, tree density and species richness on the carbon stock of tree vegetation was also discussed in this paper.

Currently, global warming is considered as one of the serious global issues [1]. The increase in the concentration of greenhouse gases particularly carbon dioxide in the atmosphere elevates the earth’s average temperature. It is well said in the United Nations Framework Convention on Climate Change (UNFCCC) in the third formal meeting (conference of parties, COP) that took place in December 1997 in Kyoto, Japan, to reduce the greenhouse gas emissions [2]. Most industrialized countries have signed the Kyoto Protocol to reduce their greenhouse gas emissions [3]. Carbon tax and subsidy systems have been introduced in the energy industries in Sweden, Finland, Norway, and the Netherlands since the early 1990s, to achieve the target of greenhouse gas emission reductions [3,4]. Increase in carbon dioxide emission is mainly attributed to fossil fuel combustion and deforestation [5,6]. Though, several efforts have been taken worldwide to reduce carbon emissions the increase in carbon dioxide gas concentration in atmosphere is still alarming. Prior to industrial revolution the concentration of atmospheric carbon dioxide was around 270 ppm, and its concentration in atmosphere is increasing rapidly [7]. The current concentration of the gas in the atmosphere is 400 ppm [8], and it is estimated that by 2070 the concentration will reach up to 500 ppm [9,10]. Scientists have predicted that by 2100 the mean global surface temperature will increase by 1°C to 3.5°C [11]. Drastic change in climate will lead to great challenges for forest management with heavy socio-economic and biological problems [12]. Some of the effects of global warming include rise in temperature over land and sea surface, melting of glaciers and ice sheets, rise in sea level, ocean acidification, change in flowering and fruiting phenology of plants, shift in movement of fishes and animals [10,13]. Further, new catastrophic diseases have been outbreak due to global warming and climate change [14]. Mitigation of global warming by capturing the excess atmospheric carbon dioxide through carbon sinks is of urgent need. Tropical forests are of important component in the global carbon cycle. Trees play a major role in forest carbon storage that they act as major sinks of atmospheric carbon which capture the gas and store it in the form of fixed biomass through photosynthesis process [15]. About 30% to 40% of the terrestrial net primary production is from tropical forests [16]. Fast paced conversion and destruction of tropical forests impact heavily on the global carbon cycle. Understanding the potential of carbon storage in forest ecosystem is necessary for the management of carbon pools in the system. A few studies on the quantification of forest carbon stock have been carried out worldwide [1,6,7,10,17-20] and still many forest systems remain unexplored. This study was undertaken in the tropical forests of Bodamalai hills with the following objectives: first, to quantify the carbon stock (tC/ha) of tree vegetation in the forest system; second, to find the predominant carbon storing tree species; and finally, to find the predominant carbon stocking forest type in the study area.

The present study was carried out in Bodamalai hills (latitude: 11° 08.5'-11° 28.5' N; longitude: 78° 29.0'-78° 48.5' E) located in Tamil Nadu state of India (Figure 1). Bodamalai covers about 156 km2 areas, and its altitude ranges from 300 to 1155 m. It is composed of masses of Charnockite associated with gneiss and varied metamorphic rocks, and the soil is red, loamy and lateritic. The meteorological data for the study area reveals that the mean annual temperature and rainfall are 28.3°C and 1058 mm, respectively. The bulk of the rainfall is received during August to October, and the mean annual rainy days are 61 days. The entire stretch of the study area was divided into 6.25 × 6.25 m grids, from each grid one 0.5 ha transect (5 m × 1000 m) was established and trees ≥30 cm circumference at breast height were inventoried [21]. The vegetation character of the total ten transects are provided in Table 1. A sum of 1449 trees representing 64 species was recorded from the total 5 ha sampled from the mountain forest. The average species richness per transect was 21.5 ± 3.1 species and it ranged from 9 species to 37 species per transect. The average tree density per transect at 290 ± 28.4 trees/ha, and it ranged from 200 trees/ha to 454 trees/ ha. Both destructive and non-destructive sampling methods are used for quantification of vegetation carbon sinks. Destructive sampling method (which involves felling of trees) is mostly adopted for plantation forest, and non-destructive sampling method (which involves usage of allometric equations using measurable variables) is widely used for estimation of carbon stocks of natural forests. In the present study, total carbon storage of each tree was determined using non-destructive method adopted earlier [6].

Where ‘AGB’ is aboveground biomass, ‘BGB’ is below ground biomass, and ‘0.5’ is the conversion factor which represents that the carbon content is assumed as 50% of the total biomass as followed by Takimoto et al. [22], Khan [23], Sundarapandian et al. [24]. AGB was estimated using allometric equation following Brown et al. [25],

Vegetation of the ten transects sampled from the Bodamalai hills was classified into three forest types viz. mixed deciduous, dry deciduous and scrub forests. Based on tree girth at breast height (GBH), four tree size classes were recognized viz. 30-90 cm GBH, 90-150 cm, 150-210 cm GBH and >210 cm GBH. Analysis of Variance (ANOVA) was performed to check the significance of variation in total carbon stock among the three forest types and among the four tree size classes. Regression analysis was used to test the relationship between tree carbon stock with tree species richness, tree density and altitude of forest location. 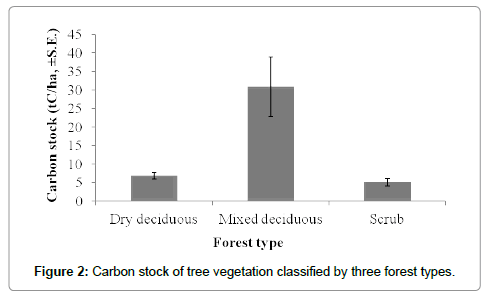 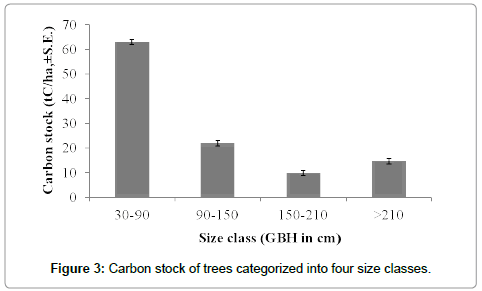 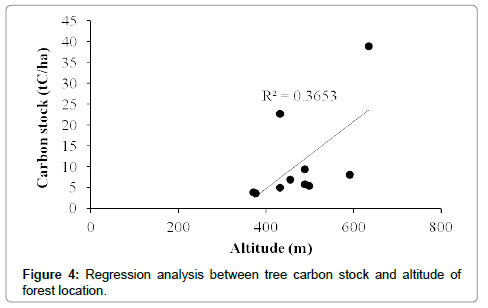 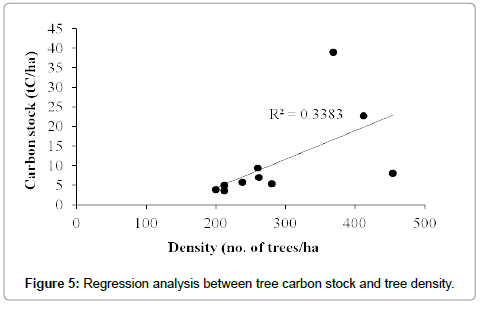 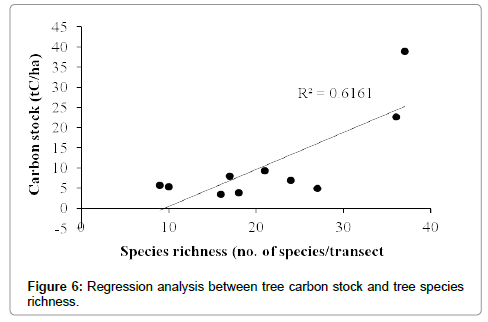 The rise in the atmospheric concentration of greenhouse gases particularly the carbon dioxide leading to global warming and climate change has attained the international concern in the recent years. Realizing the urgent need for quantifying the forest carbon stock for better monitoring and management of the forest biomass carbon a few studies have been carried out so far. When compared, the carbon stock by the tree vegetation in the tropical forest of Bodamalai (10.9 tC/ha) is lower than the tropical forests of Kalrayan hills (38.88 tC/ha, [1]), Shervarayan hills (56.55 tC/ha, [10]), Chitteri hills (58.55 tC/ha, [6]) in India, tropical moist forests at Bangladesh (48.88-118.45 tC/ha, [32]), tropical moist evergreen forests at Sri Lanka (109.25-299.00 tC/ha, [33]), montane rain forests at Jamaica (131.68-179.40 tC/ha, [34]), New Guinea (290.38 tC/ha, [35]), tropical rain forests at Malaysia (132.25- 166.75 tC/ha, [36], Khade, Ghana (152.84 tC/ha, [37]), New Guinea (164.45, [38]), Khado Chang, Thailand (167.10 tC/ha, [39]), Cambodia (200.10-238.63 tC/ha, [40]), Western Ghats, India (263.47 tC/ha, [41]), lower montane forests at El Verde, Puerto Rico (134.21 tC/ha, [42]), tropical seasonal rain forest at Xishuangbanna, China (138.73 tC/ha, [43]), Red pine forest at Great Lakes, Northern America (130-195 tC/ ha, [44]), and falls within the range reported for tropical evergreen forests at Myanmar (5.75-115.00, [45]).The tree species Albizia amara with 11.5% of the total tree population shared maximum (16%) of the total carbon stock (tC/ha) in Bodamalai forest, while Syzygium cumini shared the maximum carbon stock value (9%) in Shervarayan hills [10]. In the present study, the carbon stock by individual tree species was found maximum for Ficus benghalensis (0.68 tC/tree) which is lesser than the value recorded for Artocarpus heterophyllus (2.76 tC/tree) at Shervarayan hills [10], Mangifera indica (1.73 tC/tree) at Chitteri hills [6]. The order of carbon stock by the three forest types in the present study was mixed deciduous > dry deciduous > scrub forest which is different from the order semi-evergreen > mixed decioduous > scrub reported for the Chitteri hills [6], Shervarayan hills [10]. No relationship was observed between the tree carbon stock (tC/ha) and the altitude of forest location in Bodamalai hills (Figure 4) and a similar trend was reported for the Chitteri hills [6], whereas in case of the Shervarayan hills a strong positive relation was reported between the tree carbon stock (tC/ha) and the altitude of forest location [10]. This difference in the trend may be due to the difference in species composition and forest type of the above compared hills. The tree carbon stock (tC/ha) in the study area was not influenced by the density of trees (Figure 5) and a similar trend was reported for Shervarayan hills [10]. Statistical analysis revealed (R2=0.616) that the carbon stock (tC/ha) in the study area increases with increase in species richness (Figure 6) and this trend is different from the one reported for Shervarayan hills [10].

The results of the present study conclude that 1) Bodamalai forest has low carbon storing (10.9 tC/ha) tree vegetation, 2) Albizia amara is the predominant carbon storing (16%) tree species in the study area, and 3) mixed deciduous forest is the high carbon storing forest type in the study area. Bodamalai being threatened from anthropogenic activities [21] deserves proper management, and tree plantation program for its conservation. It is an urgent need to educate local people by creating awareness on the importance of forest in reducing the concentration of atmospheric carbon and its role in mitigation of global warming and climate change. Further, regional forest carbon stock monitoring program is necessary for better understanding the dynamics of forest carbon storage at a regional scale. The present study provides important data useful for carbon stock monitoring program at national as well as global level.

I sincerely thank Dr. N. Parthasarathy, Professor of Ecology and Environmental Sciences, Pondicherry University for all his support and encouragements.

Copyright: © 2015 Pragasan AL. This is an open-access article distributed under the terms of the Creative Commons Attribution License, which permits unrestricted use, distribution, and reproduction in any medium, provided the original author and source are credited.