Tree species inventory and mapping are important for the management and conservation of forests. Especially in tropical forests, field based inventories are very tedious and time consuming. Therefore, the crown-level spectral data collected by the high spatial resolution airborne imaging spectroscopy provides promising possibilities for improving the accuracy and efficiency of tree species inventory and mapping. In this study, the feasibility of AISA Eagle VNIR data for spectral discrimination of indigenous and exotic tree species in the Ngangao forest in the Taita Hills in south-eastern Kenya was examined. The airborne AISA Eagle VNIR data (400-876 nm, bandwidth approximately 4.6 nm) was acquired in January 2013. The data was georeferenced and atmospherically corrected with a final spatial resolution of 1 m. The field data consisted of 152 samples from 10 species (six indigenous and four exotic species), which were mapped both in the field and from the AISA images. Stepwise Discriminant Analysis was used for tree species classification using three sets of inputs: (1) all narrowbands, (2) a combination of narrowbands and selected vegetation indices (VIs), and (3) simulated blue, green, red and NIR broadbands. According to the results, both the narrowbands and VIs provided a cross-validated overall accuracy of 77.0%. The simulated broadbands provided considerably lower overall accuracy of 38.2%, which emphasizes the utility of hyperspectral data in tropical tree species discrimination. High overall accuracy (92.8%) was attained when separating only exotic and indigenous species.

Forests play an important role in climate regulation and are integral to various economic, cultural and ecosystem services, and therefore it is essential to sustainably manage and conserve them [1]. In Taita Hills, forests are an important source of water, herbal medicine, sacred places and tourist attraction. They are also rich in biodiversity. They are also home to three endemic birds and several plant species. The Taita Hills are part of the Africa’s Eastern Arc Mountains, which have been identified as one of the top ten biodiversity hotspots in the world because of the diverse flora and fauna [2]. There are three major forest fragments in the Taita Hills (Chawia (86 ha), Mbololo (185 ha) and Ngangao (120 ha)) and several other small fragments [3]. However, they are highly disturbed by human activities. For example, in 2010, the western side of Ngangao forest was set ablaze and a large extent of exotic forest was lost. In Kenya, forest mapping has been restricted to either exotic or indigenous level and only tedious and time consuming methods have been used to identify trees at species level. The development of high spectral resolution sensors have provided new possibilities of mapping forests at species level using remote sensing techniques. Remote sensing techniques offer fast, upto- date and accurate methods of discriminating between different tree species [4]. The high spectral resolution of hyperspectral data comes with its own disadvantages [5,6]. First, there is strong correlation between bands, which can cause convergence instability in the image classification and influence the classification accuracy. If all the bands are used in classification without selection, the classification accuracy will decrease. One way of overcoming this challenge is to use Stepwise Discriminant Analysis (SDA), which helps in identifying the useful spectral bands for discriminating different species. Secondly, a sufficient number of training samples are needed for good classification results. It is difficult to determine optimal spectral bands for classification if very small number of training samples is available. Thirdly, the high number of spectral bands results to increased processing time and cost that reduces the processing speed and benefit. Furthermore, Jusoff and Pathan [6] note that since hyperspectral data is rich in spectral information, it is important to evaluate and select optimal features for a concrete application goal in order to effectively and accurately extract them from the image. In this study, the feasibility of AISA Eagle VNIR data for spectral discrimination of indigenous and exotic tree species in Ngangao forest was examined. Furthermore, the classification accuracy was tested to establish whether there was improvement by using narrow bands in comparison to simulated broadbands in VIS-NIR range.

Ngangao forest (38°20’E, 3°21’S) is one of the remaining forest patches in Taita Hills. Taita Hills are located approximately 100 km east of Kilimanjaro and 175 km inland of Indian Ocean. The area receives a bimodal pattern of rainfall with the long rains occurring from March to May and the short rains from November to December, but the mist and cloud precipitation occurs throughout the year in hilltops [3,7]. The mean annual rainfall in the hills is approximately 1500 mm [3]. Ngangao forest is located on an eastern slope of a north–south oriented mountain ridge with the western slope covered mainly with open rock and some patches of Acacia mearnsii and Pinus patula plantations. It covers an area of about 120 ha and the elevation ranges between 1700–1952 m [8].

Acquisition and pre-processing of hyperspectral images

The hyperspectral images were acquired using Airborne Imaging Spectrometer for Applications (AISA) Eagle VNIR sensor on 4th February 2013 at a mean flying height of approximately 2300 m. above sea level. The sensor covers the spectral range of 400-1000 nm with 129 spectral bands that have bandwidth of approximately 4.6 nm. Ngangao forest was covered by 11 flight lines running across the mountain range with swath width of approximately 500 m. The images were radiometrically and atmospherically corrected using CaliGeo Pro and ATCOR-4 software, respectively. A DEM of 20 m spatial resolution was resampled to 1 m resolution and used to orthorectify the images. The atmospherically corrected images were then geometrically corrected in ENVI 4.8 software using the GLT files generated by the CaliGeo Pro software.

High resolution aerial photographs, which were taken in January 2012 using Nikon D3X digital camera were used in the field to delineate tree crowns. These tree crowns were identifiable both on the images and on the ground. The crowns were then on-screen digitized with ArcGIS 10 on the true colour composites of the AISA images (Figure 1). Since the images were taken in the mid-morning hours of the day, some tree crowns were partly covered by shadows and only the sunlit part of the crown was digitized. The exotic trees usually have small crowns and they are mostly plantation forest. For this reason, small portions of the plantations were digitized to represent the training data for those specific species. A total of 152 samples were digitized representing 10 different tree species (Table 1). The average spectral reflectance of each tree crown was extracted from the AISA image for each of 129 spectral bands. The average spectral reflectance of each tree species was then calculated. However, wavelengths beyond 876 nm exhibited spectral noise and therefore were not used in the analysis. This means that 103 spectral bands were used in the analysis. Figures 2 and 3 show the average spectral reflectance curves of indigenous and exotic tree species. 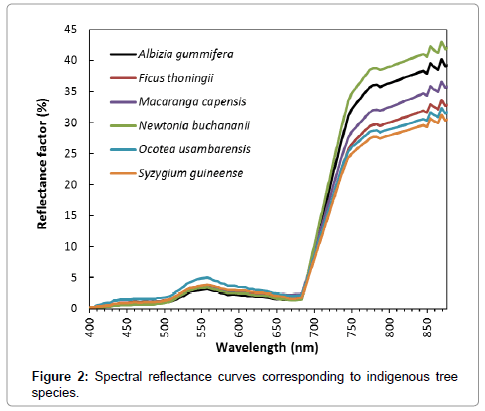 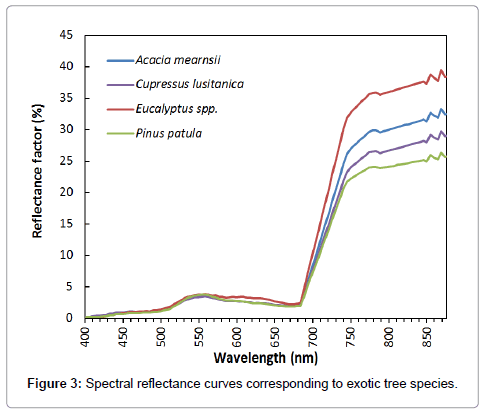 The Stepwise Discriminant Analysis (SDA) in PASW Statistics 18 software was used for statistical analysis and classification. The method uses reflectance values from training samples to build discriminant functions for each tree species [9]. SDA includes a feature selection method that repeats the addition and removal of a feature at each step. This process allows us to find the best subset with which satisfactory discrimination performance can be obtained. A linear function relating dependent variables (tree species) and independent variables (spectral bands and VIs) was generated and at each step more variables were added on the function while those considered not useful in the discrimination were removed. The procedure continued until none of the remaining variables seemed to improve the classification accuracy. The F statistic was used to evaluate if variables were entered into or removed from the discriminant model. The discriminatory power of the model was measured by Wilks' Lambda. Leave-one-out cross validation was used for the validation of the results of the classification. As a result, the samples of each tree species were classified by the linear function derived from all the samples other than the sample left out for validation.

The results of feature selection are shown in Table 3. When using both narrowbands and VIs, six spectral bands and seven VIs were selected for classification, and 11 bands when using only narrowbands. However, when using the broadbands, the four bands were used at once in the classification. When using only the narrow bands, 77.0% of the tree species were correctly classified using the leave-one-out cross validation approach with a kappa value of 0.734 (Table 4). Acacia mearnsii, Cupressus lusitanica, Ficus thonningii and Syzygium guineense were poorly classified with producer’s accuracies less than 70.0%. However, that of Eucalyptus spp., Pinus patula, Albizia gummifera, Macaranga capensis, Ocotea usambarensis and Newtonia buchananii was higher than 80.0% (Table 5). Those species which had fewer training samples were poorly classified as compared to those which had more samples. When using both narrowbands and VIs, the cross validated overall accuracy remained the same at 77.0% and a kappa value of 0.733. Acacia mearnsii, Cupressus lusitanica, Ficus thonningii and Syzygium guineense had producer’s accuracies less than 70.0% and that for the rest of the species was above 70.0%. Finally, when using four broadbands, the cross-validated overall accuracy was only 38.2% and only producer’s accuracy of Pinus patula was greater than 70.0%.

Table 4: Summary of the classification results for the three tested options based on the leave-one-out validation.

Table 5: Confusion matrix achieved by using narrowbands only for discriminating tree species (see Table 1 for the full names of the tree species).

There were mixed results in the producer’s accuracies between the results obtained from the combination of narrowbands and VIs and those from narrowbands only. Some accuracy for respective tree species slightly improved, while others got worse. However, the results suggest that the VIs tested here cannot improve discrimination between the studied tree species. The spectral bands selected for classification included bands in the complete spectral range from blue to NIR, although bands in red and green parts of the spectrum were most common. Van Aardt and Wynne [10] also found out that narrowbands in NIR, red and green regions were very useful in discriminating the tree species using the SDA approach. Furthermore, our results demonstrate the high potential of hyperspectral data to discriminate tree species in comparison to broadband data. In the three classification options, the classification accuracies of Acacia mearnsii, Cupressus lusitanica, Ficus thonningii and Syzygium guineensee were relatively low as compared to the other species. This could be attributed to the few number of training samples collected for each of these tree species [9] but also to spectral similarity of those species. The indigenous forest in Ngangao is characterised by mixed and dense canopy. Regardless of this, the identification of the selected species was generally successful and this could improve with increase in the number of crown samples. In addition, other classification methods such as Spectral Angle Mapper (SAM) could be tested to check the quality of the results [11].

We would like to acknowledge Climate Change Impacts on Ecosystem Services and Food Security in Eastern Africa (CHIESA) project for financing this research. We would also like to acknowledge Rami Piiroinen and Tuure Takala, both from University of Helsinki, for assisting in AISA data pre-processing and Jonam Mwandoe from Kenya Forest Service for assisting in data collection.

Copyright: © 2015 Nthuni S, et al. This is an open-access article distributed under the terms of the Creative Commons Attribution License, which permits unrestricted use, distribution, and reproduction in any medium, provided the original author and source are credited.