Cola tree "cola nitida" (vent) Schott and Endlicher, is a perennial, outcrossing and monoecious plant. It belongs to the type of several species that are useful and/or edible. "Cola nitida" is the species that is cultivated in Cote d'Ivoire and grows easily throughout the forest zone. Primarily, cola is grown for its seeds. Cola or cola nuts, caffeine-rich (23%) is a nervous stimulant, a tonic for the heart and an appetite suppressant. The seeds of cola contain more caffeine than coffee and a large amount of theobromine and glucose. It contains three more starch than cocoa, but low in fat, and a special form of tannins [1].

The relevance of the issue is also accentuated by the fact that Cote d'Ivoire is the world's largest producer and exporter, with about 100.000 tons of fresh nuts per year [2]. Mostly, Ivorian production is used for local consumption and export to neighboring countries especially Mali, Niger, Senegal and Burkina Faso. Cola nuts, therefore, remains the first agricultural product exported toward other African countries by Côte d'Ivoire [2]. However, its marketing remains mostly an informal activity, despite the fact that nut is used in brewing, food, pharmaceutical and dye industry [3,4].

Apart from its important role as it symbolizes the sacred [5], cola nut has also medicinal virtues. It used as a stimulant, promoting physical and mental endurance of manual workers [6-8]. It is an ingredient used in the formulation of some energetic drinks and pharmaceutical products [9]. Cola nuts are mostly grown in West Africa because they contain two alkaloids, caffeine and theobromine which are powerful stimulants acting on fatigue, thirst and hunger. They are supposed to ameliorate intellectual activity [10]. Due to its unique bitter taste, cola nut is effective to cool the mouth and its branches are used as "chew sticks" to clean teeth and gums [11].

Little known, the cola industry maintains financially with some difficulties its actors. A study conducted in 2004 by the International Centre for Research in Agroforestry (ICARF) in the far north of Cameroon, noted that 89% of traders operating in the wholesale marketing of cola get most, if not all of their revenues from the sale of this product. Only 11% of them say to practice other gainful activities except the sale of cola [12]. This justifies the direct link between the sale of cola nut and improvement of living standards of these traders. Mostly, it is consumed fresh for its many uses. However, its postharvest storage constitutes a serious matter for the farmers. In practice, the cola is attacked by weevils (such as Balanogostris colae , Paremydica inspretara), insect (coleopteran, Diptera (Pteranduscoloae), (Diptera; Tephritidae), and fungi (Aspergillus niger) that can provoke 30-70% of losses during storage [13-15].

Little or no information is available about practices of cola nuts producers or seller. Only Dembele et al. [15] reported the use of endosulfan and DDT in the fight against pests cola nuts before marketing. Thus, the purpose of the study was to investigate the behavior of the actors of cola nuts in Côte d'Ivoire to appreciate the rate of loss during (Cola nitida) pre or post-harvest. Yet, such information is vital for proper understanding of its economic values. 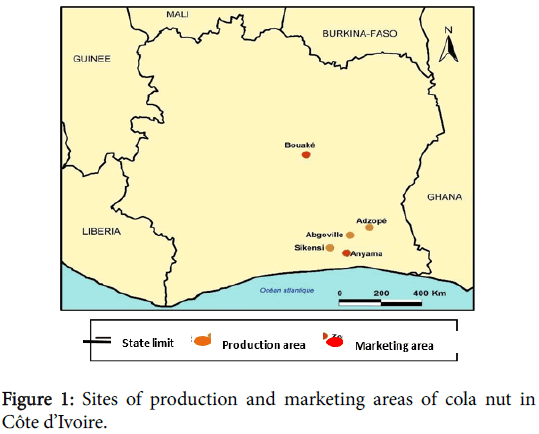 Figure 1: Sites of production and marketing areas of cola nut in Côte d’Ivoire.

Qualitative surveys: A focus group based on a group interview technique has been done to collect information's about cola such as its uses, specifications, pre and post-treatment and marketing. Use and quality of cola nut 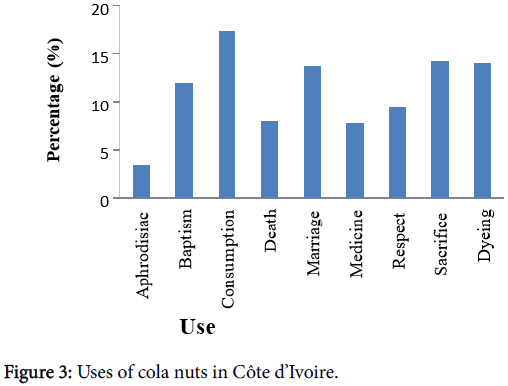 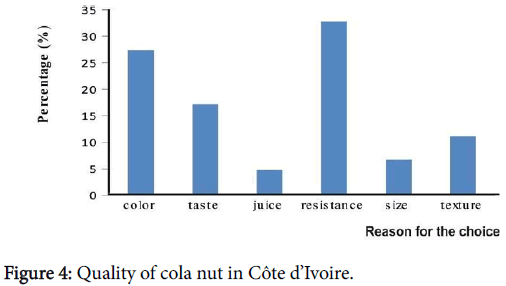 Quality according to the production zone of cola nut

The characteristics of cola nut according to the production zones are shown in Table 1.

Table 1: The characteristics of the kola nut depending on the production region. **=Information obtained from producers and traders of surveyed areas, *=Survey area, a=white, red and pink.

Cola nuts from the West (Man, Danané, Duekoué, Touleupleu, Méagui), South (Sikensi and Agboville) and Center (Yamoussoukro) of Côte d'ivoire are mixed and characterized by their resistance, average size and juice quantity, and their long shelf life (more than one year). Abengourou (East of Côte d'ivoire) cola nuts are white color with 6 months of shelf life. Although, San Pedro cola nuts are highly valued (crunchy texture and nice taste), they are characterized by their low resistance and shelf life (6 months).

Cola nut pre-harvest and harvest practices: In Côte d'Ivoire, producers have generally a field of 1 ha (Figures 5 and 6). Weeding was regular (80%) but without herbicides. 94% of producers used insecticides for the maintenance of their field. In picking, the gathering wood remains the most used (42%) followed by freefall pods (37%) and iron hook (21%) (Figure 7). After harvesting, pods are piled on the ground in a dry and shaded area (Figure 8). More than half of producers (56%) admitted to not sort out pods (Figure 9) and the lost rate was 10% of the total harvest (Figure 10). 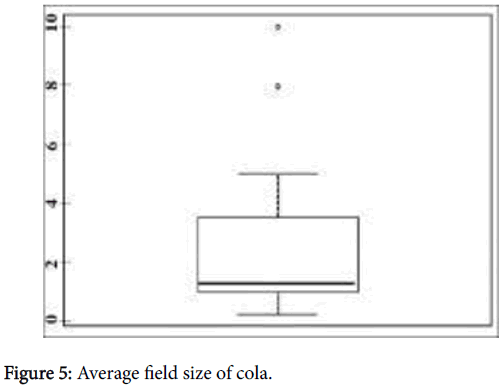 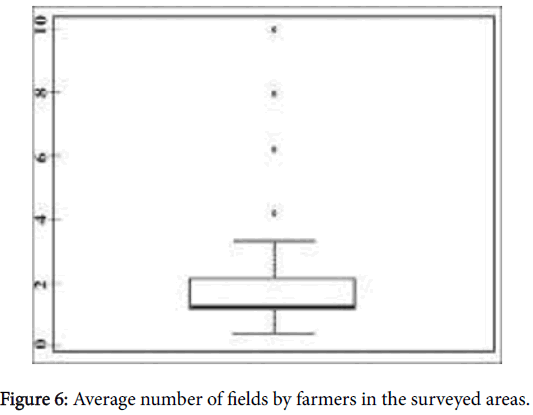 Figure 6: Average number of fields by farmers in the surveyed areas. 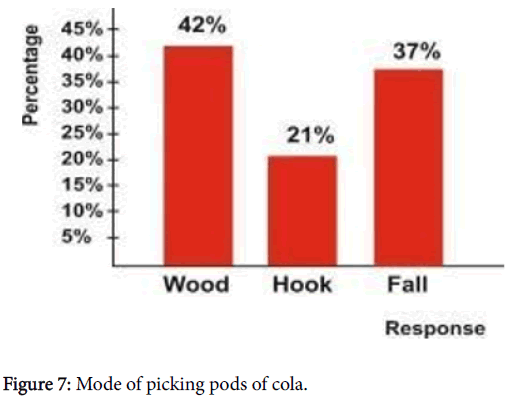 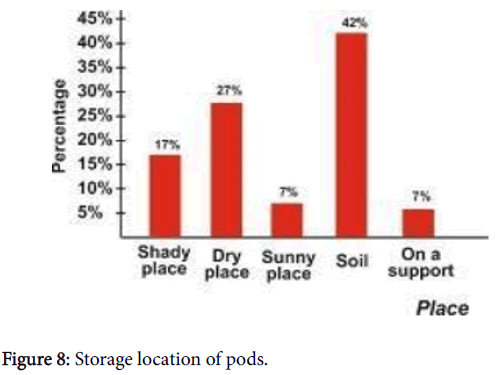 Figure 9: Sorting out of pods. 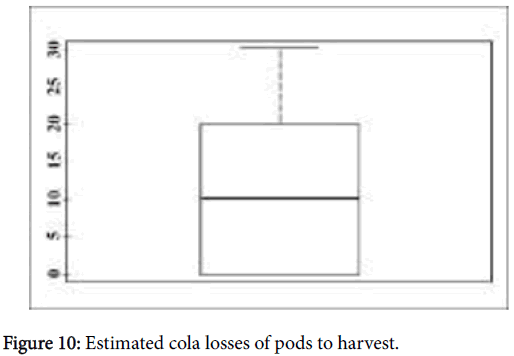 From the producer: The pods opening is done manually without chemicals products intervention. Machete (83%) was the preferential tool for this task followed by wood (14%) (Figure 11). The skinning is done with machete (48%) or soaking (43%) (Figure 12). These methods caused a loss of 20% in terms of skinned nut (Figure 13). 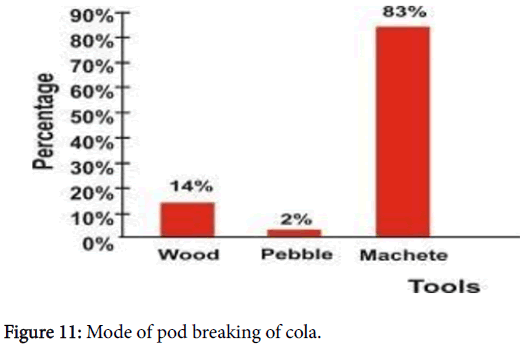 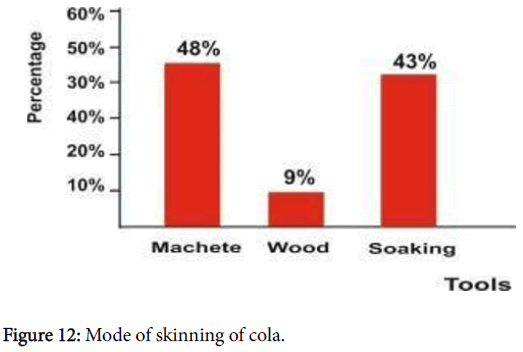 Figure 12: Mode of skinning of cola. 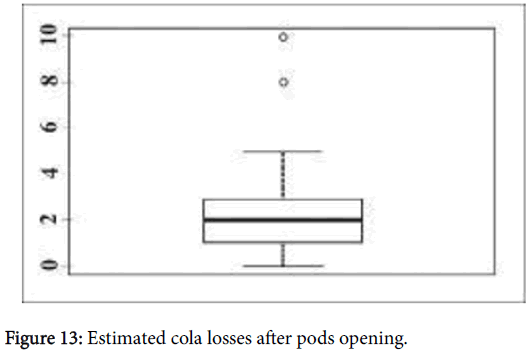 From the trader: Data showed that 86% of producers used chemical products on nut before packaging (Figure 14). Active molecules used were Chlorpyrifos-ethyl (Durexa and Pyrical), Magnesium phosphide 57% (Phostoxin, Bextoxin), DDT, deltamethrin (Decis), Cypermethrin (Cypalm) and "Omo" powder. The skinned nuts are immediately washed and wrapped in black polyethylene plastic bags in 56% of cases. But when it comes to export to the sub-region, these nuts are quite packed in Thaumatococcus daniellii sheets (Attiéké sheet) (Figure 15). These polyethylene plastic bags are perforated, then put in polypropylene plastic bags (63%) or baskets (36%) before stored (Figures 16). The loss in terms of baskets cola at the merchant is 20% of the total goods. 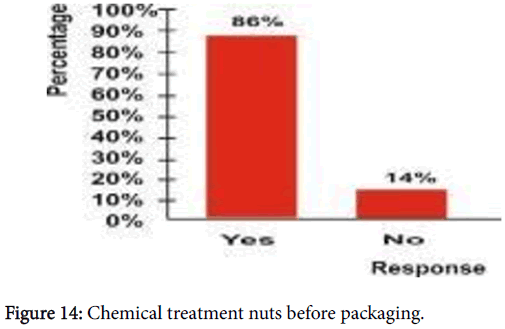 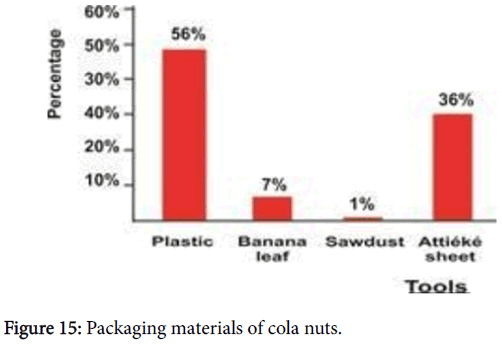 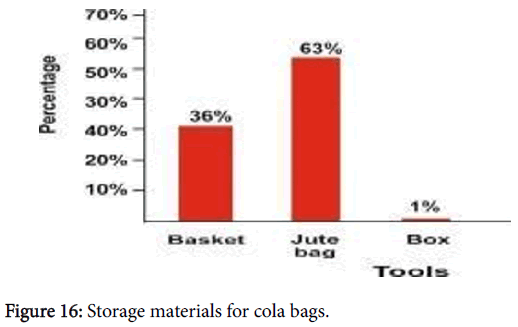 Practices applied to cola nut in Côte d'Ivoire from fields to warehouses provoke many losses. The cola nut culture remains an accompanying culture because more than 90% of the plants are wilds. In Côte d'Ivoire, harvesting and selling cola are an important source of income for men traders as mentioned by Ndoye et al. [16] in western Nigeria counter to Cameroon where 94% of traders are women. The sales of cola nuts are used to supplement the household income as reported by Champaud [17] and Falconer [18] in western Cameroon and Ghana respectively.

According to utilization, consumption (more than 50%) which appear as a first use of cola nut mean that cola nut is integrated in Ivoirian costumers as a food habit. Moreover, the long shelf life (more than a year) of mixed cola nut is due to the appreciable quantity of its juice. This quantity of juice induces their high resistance and their crunchy texture as observed in Sikensi, Yamoussoukro and Adzopé areas.

The characteristics of cola nuts produced in Côte d'Ivoire are correlated to production area as mentioned by Ladipo [19] in the survey of preference cola nuts consumers' preference. Although weevils are identified as pests capable of causing damage to 30% to 70% from the cola fields [20], the use of insecticides such as Thiodam (Endosulfan), Gamalo (Thiamethoxam) and Actara (Thiamethoxame) for the maintenance of their field could contaminated the nuts and induce some health problem for consumers.

The losses observed during the harvesting (with wood (42%) without sorting), the pod opening (with machete (87%)), the skinning (machetes (48%) or soaking (43%)) and the storage (use of chemical product (86%) and packaging in perforated plastic bags) reflect that the technique of processing and storage used by producers is not good. In fact, the use of sharp objects such as machete could cut the nuts and provoked the entrances of pests (pest and mold), which affect the quality of nuts and causing losses. The quality and the quantity of cola nuts strongly depend on the care of harvesting, washing and storage notably the methods used to extract the nut pod, drying, cleaning and storage [21,22].

Otherwise, the use of dangerous and prohibited chemicals products (Endosulfan, DDT, Gamalin 20E) to reduce weevils infection during cola nut storage is dangerous for health. Dembele et al. [15] also mentioned that producers use chemicals products before cola nuts marketing. It is forbidden to use pesticides to store cola nuts according to international agreements signed by Côte d'Ivoire [23-26]. In addition, the toxicity of these substances is well established, but the shop keepers handle it without any precaution. So, the consumers are exposed to serious pathologies due to the presence of these pesticides in nuts [27-31]. These pesticides are also a source of environmental pollution [32].

The traditional practices of cola nuts producers in Côte d'Ivoire leads pre and post-harvest loss, human health problem and environment degradation due to the use of unapproved products. It is important to sensitize cola nuts actors and request the State of Côte d'Ivoire to become involved in this sector.

This research was supported by grant from the FIRCA of Côte d'Ivoire (Funds interprofessional for research and farm advisory). Thanks to FENAPROCO-CI (National Federation of Cola Producers and Traders in Côte d'Ivoire) for its support during investigations.

Copyright: © 2018 Marc NJ, et al. This is an open-access article distributed under the terms of the Creative Commons Attribution License, which permits unrestricted use, distribution, and reproduction in any medium, provided the original author and source are credited.