Copyright: © 2015 Gupta AA. This is an open-access article distributed under the terms of the Creative Commons Attribution License, which permits unrestricted use, distribution, and reproduction in any medium, provided the original author and source are credited.

Thorough review of literature reveals tobacco, alcohol and areca nut are the established etiopathological causes of oral carcinogenesis [1-6]. Their roles and association with the oral cancer are so deep rooted that the treatment strategies related to its conventional etiological factors have been studied enough. But the alarming situation is that even after so many researches on the topic we are still not able to decrease the mortality rate where oral cancer is still the third most cause [7]. In such situation there is a great need to shift our area of concern from the deeply studied etiological factors to the unconventional ones. This would allow the scientists to develop new treatment strategies which would reduce the mortality rate of the oral cancer. The aim of this article would be to overview the unconventional causes of conventional oral cancer.

The unconventional causes of oral cancer can be clubbed under two headings of I2 where the two is belong to infection and irritation. The infectious causes would further include bacterial, fungal and viral infections amongst it while the chronic trauma of oral mucosa can be classified under the second I is that irritation. 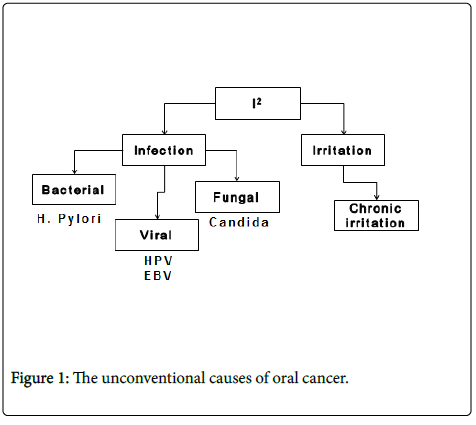 To explore viral-mediated oncogenesis, a complex series of genomic studies illustrated the marked complexity of cellular deregulation induced by the expression of viral-oncoproteins and also identified numerous signalling pathways involved in cancer development [8]. In general, oncogenic viruses are able to disrupt cell cycle checkpoints induced by genotoxic stress. In response to viral infection, p53 protects normal cells from malignant transformation by inducing either cell cycle arrest or apoptosis. Therefore, it is not surprising that either p53 itself or the connecting cellular proteins that are involved in downstream activities are inactivated by viral-antigens via either releasing cells from cell cycle checkpoints or protecting cells from the p53- dependent apoptotic pathway [9]. 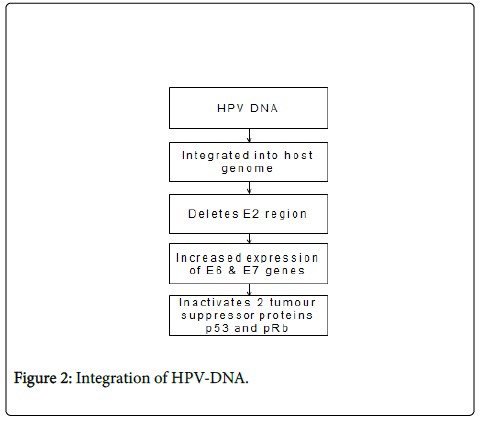 Papillomaviruses are members of the Papovaviridae family where HPV is a small, nonenveloped virus, with a diameter of 55 nm. HPVDNA generally is integrated into the host genome. Integration of HPVDNA disrupts or deletes the E2 region, which results in loss of its expression [10]. This interferes with the function of E2, which normally down-regulates the transcription of the E6 and E7 genes, and leads to an increased expression of E6 and E7 genes. The function of the E6 and E7 products during a productive HPV infection is to subvert the cell growth-regulatory pathways and modify the cellular environment in order to facilitate viral replication [11]. The E6 and E7 gene products deregulate the host cell growth cycle by binding and inactivating two tumor suppressor proteins: the tumor suppressor protein (p53) and the retinoblastoma gene product (pRb) (Table 2). The HPV E6 gene product binds to p53 and targets it for rapid degradation [12]. As a consequence, the normal activities of p53 which govern G1 arrest, apoptosis, and DNA repair are abrogated. The HPV E7 gene product binds to pRb and this binding disrupts the complex between pRb and the cellular transcription factor E2F-1, resulting in the liberation of E2F-1, which allows the transcription of genes whose products are required for the cell to enter the S phase of the cell cycle [13].

Epstein-Barr virus (EBV) is frequently associated with malignant cell transformation, above all through the action of the oncoprotein latent membrane protein-1 (LMP-1) [14], present during viral persistence. LMP-1 expression in the immunodepressed host can induce the oncogenic transformation of B lymphocytes and the appearance of lymphoproliferative processes [15].

In human neoplasias strongly associated with EBV, the virus is frequently found to be latent LMP-1 reduces the response of cells to normal differentiation signals, increases their invasiveness in the collagen matrix [16], and can transform human fibroblasts and keratinocytes. LMP-1 also induces resistance to apoptosis in B cells through the activation of transcription factors NF-κB, activator protein (AP)-1 [17].

A major finding of the study came out to be the significant frequency with which EBV-positive OSCCs appear on the lateral edge of the tongue. Another important finding was the significant association between the presence of EBV in the OSCCs and the degree of nuclear atypia [18]. 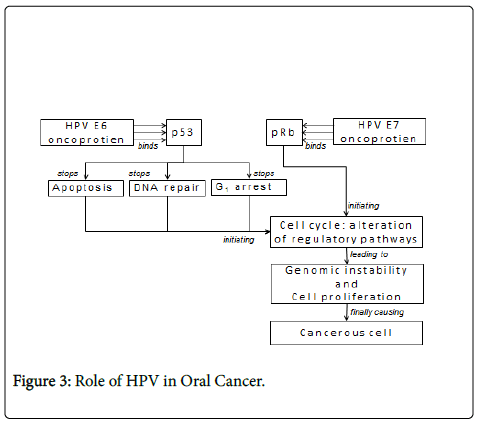 Oral cavity plays host to a wide array of microorganisms inclusive of variety of bacteria, viruses and fungi. Oral microbes can also act as an opportunistic pathogens and of particular relevance in this context is the infection caused by fungal organism most notably candida.

It is well known that Candida species are normal commensals of oral cavity in up to 50% of the healthy population [19]. However, involvement of various local and systemic host factors may operate in vivo to facilitate the conversion of this harmless commensal to pathogenic organism. Evidence indicates an important role for the Candida species in oral carcinogenesis based on the fact that certain species have higher nitrosation potential thereby elaborating nitrosamine compounds which plays a role in initiation of carcinogenesis [20].

Literature review has suggested a role of candida in causing preneoplastic changes of the oral mucosa. Cawson (1973) demonstrated the ability of C. albicans to elicit epithelial hyperplasia in chick chorioallantoic membrane. Several other studies have confirmed the hyperplastic response of the epithelium when invaded by candida [21]. A significant positive correlation between fungal infection and moderate and severe epithelial dysplasia has been demonstrated [22]. Their study also showed significant worsening of epithelial dysplasias associated with fungal infection. Though, candidal leukoplakia is shown to have increased malignant transformation rates, consideration should be given to the specific strain of the organism which possesses these potential as all the strains may not have the same capability [23]. 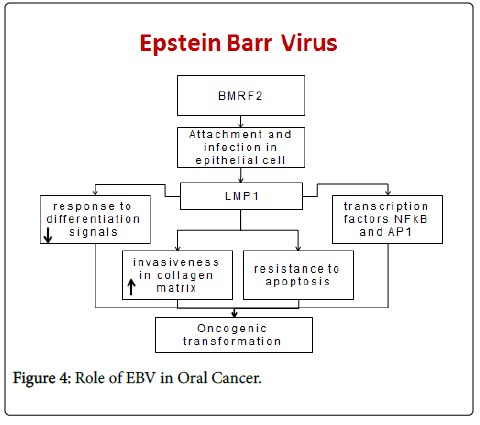 Sanjaya PR et al in 2011 proposed a pathogenesis for the role of candida in oral pre-cancer and cancer, wherein certain factors such as immunocompromised state may lead to the activation of various biotypes of C. albicans that have nitrosation ability to form nitrosamines from their precursors. These nitrosamines then act on the normal epithelium leading to dysplasia and further development of oral carcinoma thereby suggesting a causal role of Candida species. Tobacco products are known to cause epithelial changes through the nitrosation potential. Thus they postulated that C. albicans in association with tobacco will enhance the process of carcinogenesis [24].

Based on the available evidence, it can be considered that C. albicans have an indirect causal role in oral cancer along with the concurrent occurrence of other factors such as breach of epithelial integrity and tobacco usage but the ability to produce neoplasia directly without the role of other factors is not realistic.

It is the least studied area in the pathogenesis of oral cancer. Helicobacter pylori, a microaerophilic, spiral-shaped Gram-negative bacterium, colonized in human stomach, is the major cause of chronic gastritis, peptic ulcers, and gastric malignancies, including gastric noncardia adenocarcinoma and mucosal-associated lymphoid tissue (MALT) lymphoma [25].

The pathogenesis of H. pylori can however be linked to its mechanism of action leading to gastric malignancies.

Newer studies are correlating the presence of these bacteria to a state of persistent chronic inflammation and subsequent oral carcinoma.

H. pylori as infectious agent and chronic inflammation as noninfectious agent, leading to gastric and pancreatic cancer [27] serve as the best examples of infection and inflammation leading to cancerous growth. Periodontal pocketing and inflammation helps in colonization of this species in urease rich sub-gingival biofilm which also serves as selective ecological niche for the urease producing bacteria helping it in recolonization and reinfection in gastric mucosa [28].

As against bacterial carcinogenesis chronic trauma leading to oral cancer remained the decently discussed topic in the recent times, chronic trauma of the oral mucosa (CTOM) is the result of repeated mechanical irritative action of an intraoral injury agent. Defective teeth (malpositioned or with sharp or rough surfaces because of decay or fractures), ill-fitting dentures (sharp or rough surfaces, lack of retention, stability or overextended flanges) and⁄or para-functional habits (e.g., oral mucosa biting or sucking, tongue interposition or thrusting), acting individually or together, could all be responsible of this mechanical irritation. CTOM could generate lesions on a healthy mucosa or intensify previous oral diseases. 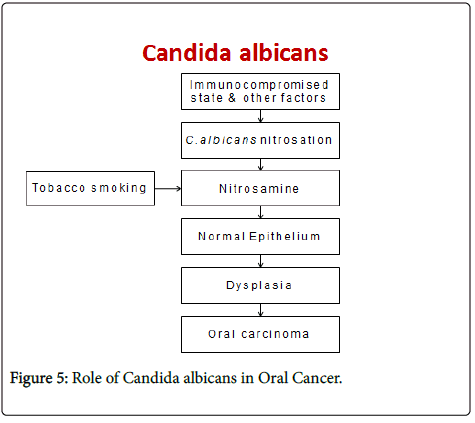 The causative role of CTOM on oral carcinogenesis is controversial. However, some studies show that CTOM plays a role at least as promoter in carcinogenesis initiated by another carcinogen [31,32].

The mechanism by which CTOM is thought to contribute to carcinogenesis is not clearly identified. It has been proposed that the wound of the oral mucosa may facilitate the absorption of other chemical carcinogens [33].

CTOM could work by at least two mechanisms. One consists in the mitosis increase produced to repair tissue injury, which put cells at risk of DNA damage by other agents, initiating carcinogenesis. The other mechanism possibly involved could be because of the chronic inflammation which happens in the site affected by CTOM, through release of chemical mediators and/or oxidative stress. This could induce genetic and epigenetic changes, damage DNA, inhibiting its repair, altering transcription factors, preventing apoptosis and stimulating angiogenesis; therefore, it could contribute in all stages of carcinogenesis [32].

Role of Inflammation in Oral Carcinogenesis

The role of inflammation in carcinogenesis has first been proposed by Rudolf Virchow in 1863, when he noticed the presence of leukocytes in neoplastic tissues [34,35]. Although inflammation acts as an adaptive host defence against infection or injury and is primarily a selflimiting process, inadequate resolution of inflammatory responses often leads to various chronic ailments including cancer [36,37].

Sustained cellular injuries due to chronic trauma can cause inflammation, which may lead to carcinogenesis. In response to proinflammatory stimuli, activated inflammatory/immune cells generate reactive oxygen species (ROS) and reactive nitrogen species (RNS), which can function as chemical effectors in inflammation-driven carcinogenesis. Thus, one of the plausible mechanisms by which chronic inflammation can initiate tumorigenesis is the generation of ROS and/or RNS in the inflamed tissue and subsequent DNA damage leading to activation of oncogenes and/or inactivation of tumor suppressor genes. 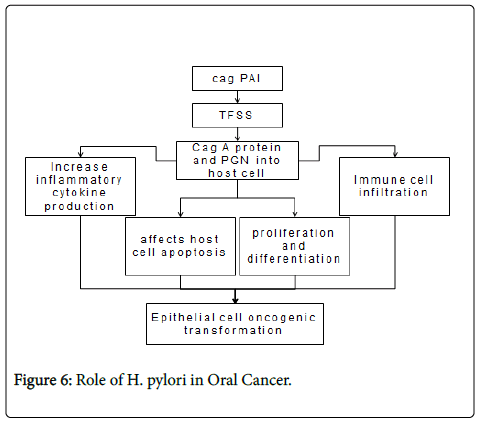 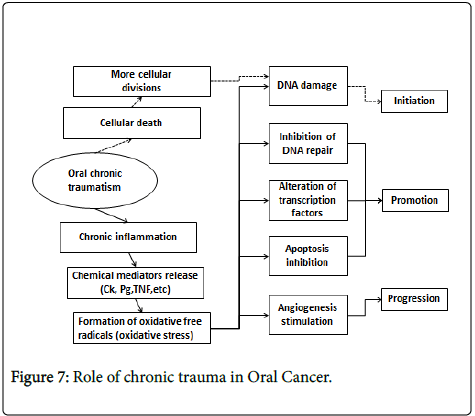 ROS-induced DNA damages including DNA strand breaks, DNA base modifications, and DNA cross-links result in the replication errors and the genomic instability and hence contribute to tumor initiation [38]. Peroxynitrite, a product formed by a reaction between NO radical and superoxide anion, causes DNA damage by forming 8- nitroguanine (8-NG) [39], which is another potential biomarker of inflammation-associated cancers [40,41].

In nutshell it can be proposed that if an individual is not predisposed to any kind of habit including tobacco chewing, smoking, snuffing etc, it does not mean that he or she is not susceptible to develop oral cancer. Proper history taking is must to rule out the infectious causes and any irritation producing factor in the oral cavity. And if the same is detected it would be a warning sign for the individual. Though oral cavity is the most accessible part of human body where lesions can be detected affectively, over and above oral cancer comes with an alarming sign of premalignancy, still the oral cancer remains the third most cause of mortality worldwide. Hence, somewhere we are all failing in diagnosing the exact cause of the situation for which the change in perspective is must. Identifying the cause would help in zeroing down the particular agent against which the targeted therapy can be planned and the prophylactic vaccine can be developed effectively. So, the future research should be directed towards the uncommon causes of oral cancer along with the substance abuse to help the world in fighting with the cancer.