Zearalenone (ZEA) is a non-steroidal estrogenic mycotoxin produced by a variety of Fusarium fungi that are commonly found in feed. ZEA cause reproductive disorders of farm animals and occasionally hyperoestrogenic syndromes of humans; also, has been shown to be hepatotoxic, genotoxic, hematotoxic and immunotoxic, evidence primarily based on studies with different biological models in vitro and in vivo in poultry and laboratory rodents. However, there is little knowledge about of the effects of ZEA in human leukocytes.

Objective: The aim of this study was to investigate the cell viability and lipid peroxidation effects caused by ZEA in human peripheral blood leukocytes.

Methods: Human leukocytes were exposed in vitro with ZEA in concentrations ranging from 10 to 80 μg/mL during 1 h of incubation. Cell viability was measured by staining with trypan blue and neutral red assays, and lipid peroxidation was evaluated by the amount of the lipid peroxidation product, malondialdehyde (MDA).

Results: ZEA significantly decreased the cell viability in human leukocytes with concentrations ranging from 10 μg/mL to 80 μg/mL. Also, we found significant increases of MDA levels in the cells exposed to concentrations between 40 and 80 μg/mL.

Conclusion: The data suggest that lipid peroxidation is involved in the citotoxicity of ZEA in human leukocytes.

Zearalenone (ZEA) is a nonsteroidal estrogenic mycotoxin produced by several Fusarium fungi, which are regular contaminants of cereal crops worldwide [1-4], causing economic losses and alterations on animal and human health [5-7]. Research has focused on estrogenic effects in domestic animal species, some recent studies showed that ZEA causes immunological alterations in several biological models. ZEA decreased the expression of CD3+, CD4+, CD8+ and CD56+ peripheral blood lymphocytes and caused chromosomal aberrations in bone marrow of Balb/c mice [8,9]. In addition, ZEA affect the expression of chicken splenic lymphocytes cytokines (IL-2, IL-6 and IFN-g) at the mRNA level [10], and inhibit the mitogen stimulated proliferation of bovine peripheral blood mononuclear cells in vitro [11]. Although the effect of ZEA on the human immune system is not fully understood, ZEA decreased proliferation of lymphocyte [12], and mononuclear cells [13]. Besides, ZEA and other mycotoxins induced immunosuppression of NK cells activity and slightly inhibited antibody dependent cellular cytotoxic reaction [14]. Also, ZEA induced macromolecules synthesis and stress response in different cultured such as Caco-2 cells [15,16] and HepG2 cells [17,18]. In this way, there is not enough information about acute toxic effects in the case of human leukocytes. In particular, we evaluated cytotoxic and lipid peroxidation activities induced by ZEA in concentrations of 10 to 80 μg/mL.

ZEA was dissolved in DMSO (2%) as a vehicle and the maximal volume used was not exceeded 15 μL/mL and dilutions were made in PBS to obtain concentrations of 10, 20, 40 and 80μg/mL, used in the experiments described later. Isolation and preparation of human peripheral blood leukocytes

Peripheral venous human blood (5 mL) was drawn from healthy donors into blood collection tubes containing EDTA [Ethical clearance, Ethic Committee 2013, School of Chemistry, Autonomous University of Coahuila, México]. The blood was centrifuged at 2500 ×g for 5 min at 4°C. The supernatant was removed and leukocytes were isolated and resuspended in 1 mL of PBS buffer (pH 7.4), and cell concentration was determined using a Neubauer hemocytometer. Then, 1×105 cells/mL was treated with different concentrations of ZEA (10, 20, 40 and 80 μg/mL) and cells treated with vehicle (DMSO) served as a negative control. All samples were incubated for 1 h at 37°C.

Neutral red uptake assay: The neutral red test is based on the ability of viable cells to incorporate and bind the supravital dye neutral red in the lysosomes [19,20]. After incubation, 20 μL of neutral red and 400 μL PBS (pH 7.4) were added and incubated for 3 h at 37°C. Thereafter, cells were washed twice with 400 μL of a solution (50 % ethanol, 1% acetic acid and 49 % distilled water). Absorbance was measured at 540 nm using the plate reader and the results were expressed as index of cell inhibition by the following formula:

Lipid peroxidation: Lipid peroxidation is a well-established mechanism of cellular injury. The present method of lipid peroxidation assay is based on the reaction of malonaldehyde with two molecules of 1-methyl-2-phenylindole [21]. Supernatants derived from cells treated with ZEA and untreated cells were added 217 μL of 1-methyl-2- phenylindole and 300 μL HCl, and were mixed vigorously with a vortex. Finally, samples were incubated 40 min at 45°C. The values were obtained by spectrophotometry at 586 nm. Concentration of MDA was calculated by a calibration curve using 1,1,3,3- tetraethoxypropane (TMP) as a standard in terms of μmol/mL.

All experiments were performed in triplicate of three independent experiments. Statistical analysis was performed using analysis of variance (ANOVA) and Dunnett's tests, using the statistical package Minitab 15. Difference was considered significant if *p<0.05. 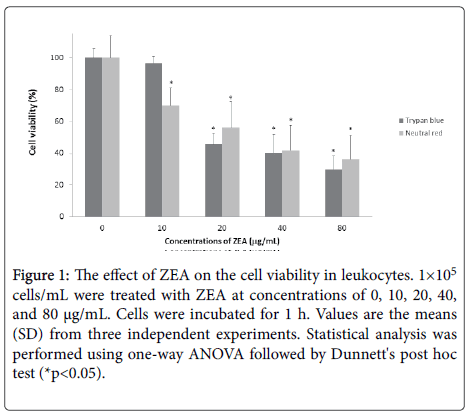 Figure 1: The effect of ZEA on the cell viability in leukocytes. 1×105 cells/mL were treated with ZEA at concentrations of 0, 10, 20, 40, and 80 μg/mL. Cells were incubated for 1 h. Values are the means (SD) from three independent experiments. Statistical analysis was performed using one-way ANOVA followed by Dunnett's post hoc test (*p<0.05). 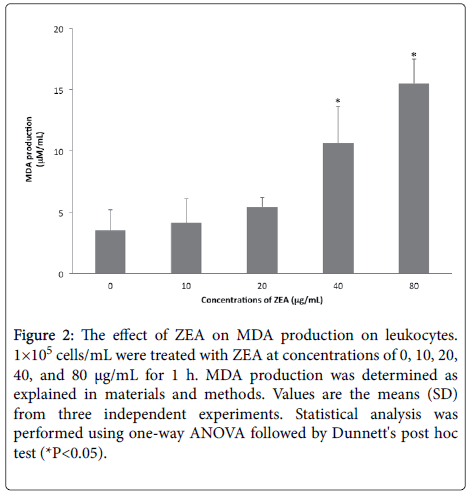 Figure 2: The effect of ZEA on MDA production on leukocytes. 1×105 cells/mL were treated with ZEA at concentrations of 0, 10, 20, 40, and 80 μg/mL for 1 h. MDA production was determined as explained in materials and methods. Values are the means (SD) from three independent experiments. Statistical analysis was performed using one-way ANOVA followed by Dunnett's post hoc test (*P<0.05).

Mycotoxins are a worldwide problem due to their high incidence in food for human and animal nutrition, and an estimate of 25% of the world’s crop production is contaminated. Zearalenone (ZEA) is a mycotoxin from Fusarium species commonly found in cereals and animal feeding stuff. ZEA cause strong reproductive disorders, genotoxic and immunosuppresive effects, potentially impacting human and animal health [1-7,22]. The main goal of the study was to evaluate the acute effects of ZEA in a short-term exposure period on human leukocytes. Our results showed that ZEA reduced cell viability in a concentration-dependent manner (*p<0.05) causing an estimated 60-70% of cytotoxicity on treated leukocytes for 1 h, through destabilization of lysosomes determined by NR assay, and damaged membranes revealed by trypan blue exclusion. On the other hand, in a study performed by Vlata et al., the concentration of 30 μg/mL ZEA was found to inhibit T and B lymphocyte proliferation and subsequently causing high rates of cell death. Conversely, the exposure of PBMC to 1 μg/mL ZEA did not alter the cell viability [13]. On the contrary, another study determined that ZEA was toxic to U-937 and HL-60 leukemic cells lines with IC50 value of 5.1 μg/mL and 44 μg/mL, respectively, but was less toxic to PBMCs (IC50 value>80 μg/mL) [23]. Also, ZEA inhibits lymphocyte blastogenesis (IC50 values of 3.5 and 30 μg/mL) [11]. In this manner, our results and previous reports, suggest that high ZEA concentrations in isolated blood human cells may exert cytotoxic effects. The role of oxidative stress in zearalenone mediated toxicity in tumoral cell lines has been reported [18,23]. In our study, to assess oxidative stress in human leukocytes, MDA was chosen as a parameter of the membrane lipid peroxidation, causes alterations in mitochondrial membrane fluidity accompanying final cell death [24].

Our results showed that ZEA (40-80 μg/mL) caused a significant increase in MDA levels in human leukocytes at 1 h (*p<0.05), while 10 and 20 μg/mL of ZEA did not affect MDA levels. Our study suggests that toxic effect induced by ZEA imply the deterioration of the membrane lipids and oxidative damage (measure as MDA production) of the cells membranes at increased concentrations (40 and 80 μg/mL). Another research demonstrated that lowest concentrations of ZEA (0.001 and 0.01 μg/mL) caused an increase in MDA levels in lymphocytes of broiler chickens at 24 and 48 h in comparison to the untreated cells [25]. ZEA induces cell death and lipid peroxidation in RAW264.7 [26], HepG2 [18] and Caco-2 cells [15,16] by ROS dependent pathways. In conclusion, our results suggest that membrane lipid peroxidation is involved in the mechanism of ZEA toxicity on human leukocytes. However, more specific studies are necessary to understand the underlying stress oxidative process produced in the leukocytes by ZEA.

Copyright: © 2015 Viera-Limón MJ, et al. This is an open-access article distributed under the terms of the Creative Commons Attribution License, which permits unrestricted use, distribution, and reproduction in any medium, provided the original author and source are credited.