Understanding the Problems and Challenges of Polymer Flooding Technique

Polymer flooding has been widely used to address the problems of high mobility ratio or high reservoir heterogeneity in water flooding operations. It reduces the surface tension between oil and water and release trapped oil and makes oil easier to produce. However, polymers tend to reside in formation due to precipitation, adsorption, mechanical entrapment, or even degradation. This study analyzed those formation damage problems in polymer flooding and provided suggestions on how to design an effective polymer flooding treatment to minimize the potential formation damage issues. Results show that the polymer solution (polymer and brine) can affect the nature of strain in different systems and thus influence regains permeability. To minimize the damage effect of polymer retention or polymer plugging, core flow tests should be designed to incorporate the effect of different parameters

The nature of polymer flooding is to use polymer agent to be function as a mobility control agent to provide better displacement and volumetric sweep efficiencies during flooding treatments. The efficiency of polymer flood is believed to be in the range of 0.7-1.75 lb polymer per bbl of incremental oil production. The target zone of polymer flooding is the remaining oil saturation above the residual oil saturation [1-5]. Polymer flooding has been successfully applied in all different types of reservoirs and provides huge amount of recovered oil production in petroleum industry. It is simple and efficient, compared with other enhanced oil recovery techniques [6,7]. It can be also applied in some special cases, such as heavy oil reservoir with low viscosity where steam assisted gravity drainage is not suitable. To be able to fully understand the problems and challenges during polymer flooding, this study presents its intrinsic properties, effective strategies to design optimal parameters, associated formation damage and polymer plugging problems, and injection issues in polymer flooding [8-12].

It is widely believed that polymer solution behaves as pseudoplastic fluids at intermediate shear rates while behave like Newtonian fluids at low or high shear rates. As in the high shear rate, all the macromolecules are oriented along the flow direction and thus reduce the viscosity. Figure 1 provides the structure of three typical polymers used in polymer flooding. In the field, synthetic polymers or biopolymers are used in polymer flooding. Polymer flooding is generally applied in reservoir with oil viscosity below 150 cp (preferable 10-100 cp) or API gravity above 15 [13]. The matrix permeability should be above 10 md. Reservoir temperature is in the range of 176 to 210°F. The clay content in the reservoir should be low. Low salinity of the injection and reservoir brines are favorable for higher recovery factor. In the field, back produced water is usually used for preparation of polymer solution as far as the water can satisfy water quality specifications after chemical treatment. However, one should note that potential damage may rise due to the re-injected waters [14-17]. 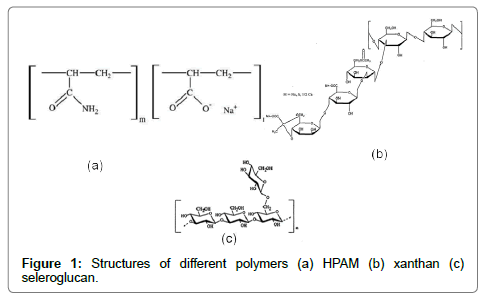 In polymer flooding, polymer can be retained in porous media through precipitation, adsorption, or mechanical entrapment. As a result, formation damage can occur. Therefore, core flow tests should be conducted to examine the potential formation damage problems during polymer flooding processes prior to field application [18,19]. The adsorption in polymer flooding can be severe, as it is irreversible and the adsorbed polymer occupies a large pore volume. In this case, it is hard to recover a considerable amount of oil and the formation permeability is decreased, leading to less recovery factor. The stability of polymer solution during polymer flooding has been a issue due to its degradation. It can be chemical degradation through oxidation or effect of ionic ions. Mechanical degradation refers to the macromolecules are sheared at high flow rate, close to wall region. Biological degradation commonly occurs in biopolymers, for example, HPAM is the nutrition source for SRB. Additionally, some polymers will change their volume ratio or viscosities under different reservoir conditions [20-22]. As a result of high rock retention, problem of formation damage can be severe. The flow region is restricted, leading to high increase in external viscosity. This further increase formation damage issues and make it is hard to displace those retented polymer out of formation. Filtration of gel from unfiltered polymer solution can also cause potential formation damage problems as a slim skin is formed. According to experimental studies, this filtration effect will reach equilibrium even after a continuous increase of the pressure differential pressure [23-25].

The selection of parameters for polymer flooding is critical to a successful chemical treatment. As polymer flooding is affected by many factors, various design parameters need to be designed and optimized. The parameters are affected by reservoir temperature, formation water salinity, divalent contents, clay contents, oil viscosity, formation permeability, etc. [26-28]. Take the effect of properties of formation for example, anionic polymers such as HPAM has a high adsorption rate in carbonate reservoirs, so specific polymers are only suitable for specific reservoir types. Heterogeneous carbonate reservoirs have a low permeability matrix and are unsuitable for large molecule polymers. Different polymers have different adsorption rate on different formation. Figure 2 shows the regained permeability comparison of different structures of polymers. To minimize the retention effect, selection of polymer should be based on vicosification/suspension properties. Branched polymers should be selected as they have less reduced formation damage compared with other polymers [29-32]. Sometimes, unsuitable polymer may plug the formation. To solve this problem, the selection of polymer should be based on the following factors: volume flux, core permeability, hydrodynamic size of the polymer, and core mineralogy and surface state [33]. 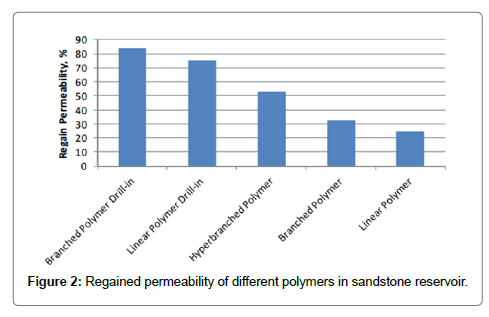 Based on above discussion, the following conclusions can be drawn from this study:

1. Rheological behavior of polymer solution in shear and extensional flows affects the flow of a fluid in porous media, and thus the potential for a fluid to reduce the permeability of a formation.

2. The polymer solution (polymer and brine) can affect the nature of strain in diff erent systems and thus influence regains permeability.

3. To minimize the damage effect of polymer retention or polymer plugging, core flow tests should be designed to incorporate the effect of different parameters.