Copyright: © 2016 Christopher B, et al. This is an open-access article distributed under the terms of the Creative Commons Attribution License, which permits unrestricted use, distribution, and reproduction in any medium, provided the original author and source are credited.

A 45-year-old woman attended our care with chronic right iliac fossa pain, nausea and diarrhoea. She was admitted four months previously with respiratory symptoms and was treated for severe bilateral pneumonia and treated conservatively for small bowel obstruction.

A 45-year-old woman attended our care with chronic right iliac fossa pain, nausea and diarrhoea. She was admitted four months previously with respiratory symptoms and was treated for severe bilateral pneumonia and treated conservatively for small bowel obstruction. Her clinical condition was critical at that point of time, of which, she was managed in Intensive Care Unit and was intubated. She had a previous history of retained placenta post-delivery and unfortunately associated peritonitis and sepsis. She also had history of oophorectomy and salphingectomy in 1994. She did previously have a history of small bowel obstruction with zone of transition at right iliac fossa, which subsequently resolved with conservative treatment. A computed tomography (CT) of abdomen and pelvis performed showed zone of transition at distal ileum. Her inflammatory markers Creactive protein (CRP) was raised and she was covered with antibiotic, Piperacillin-Tazobactam 4.5 g tds intravenously. Her CRP was improving with albumin of 18 g/dl (30-40). After a multidisciplinary meeting discussion, the plan was for ileo-colonscopy when she was clinically better. Unfortunately, she developed worsening pain at her right iliac fossa and a trial of intravenous steroid was given. She did not respond to the steroids and her repeat imaging showed evidence of small bowel obstruction and perforation (Figure 1). Emergency laparotomy was performed and this showed dilated small bowel to the level of mid distal ileum. A stricture of small bowel was seen 40 cm from ileocaecal valve with evidence of tiny perforations at ileum. Approximately, 120 cm length of small bowel was resected (Figure 2). 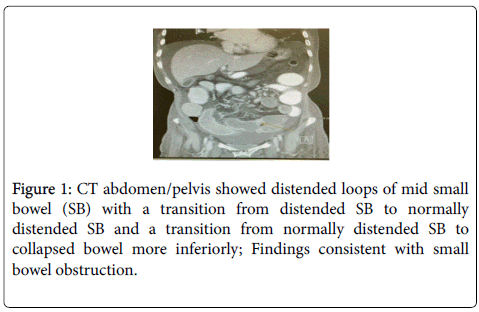 The histology was consistent with a diagnosis of Crohn's colitis, with fissuring ulcer and scarring of small bowel mucosa and transmural inflammation (Figure 3). An anti-Tumor Necrosis Factor (anti-TNF) blood screen was sent. She continued to have unremarkable postoperative recovery with nutritional support and engagement with physiotherapist. She was reviewed eight weeks later and was initiated on Infliximab Infusion. A colonoscopy was also arranged at six months post-op to assess the anastomosis site. In reference to European Crohn’s and Colitis Organisation (ECCO) [1] statement 5E, extensive small bowel Crohn's disease should be treated with systemic corticosteroids and thiopurines or methotrexate. For patients who relapsed, anti-TNF therapy with or without thiopurine is an appropriate option if there is objective evidence of moderate or severely active disease [EL5, RG D]. Surgical options should also be considered and discussed at an early stage. Indications for urgent surgery include perforation, uncontrolled haemorrhage, toxic megacolon, bowel obstruction and abscess. Elective surgery is considered in patients with stricture, fistula, malignancy, malnutrition, poorly controlled disease despite optimised medical management and extra-intestinal manifestation [2].

Patients who have clinical features that suggest a poor prognosis currently appear to be the most suitable patients for early introduction of thiopurines, methotrexate and or anti-TNF therapy (ECCO Statement 5F1) [EL5 RG D]. The inflammatory burden is greater in extensive (>100 cm) than in localised small bowel disease involvement, often resulting in nutritional deficiencies. Early introduction of anti- TNF therapy should also be considered, especially in who have clinical indicators of poor prognosis. There are a few considered predictors of early post-operative recurrence after ileocolonic resection. These include patient related risk factor i.e. Smoking, disease related risk factors i.e. prior intestinal surgery [EL 1 and RG A], penetrating disease behaviour, perianal location and surgery related risk factors i.e. extensive small bowel resection (ECCO Statement 8A1) [EL2b, RG B]. In the recent ECCO guidelines 1, ileocolonoscopy is recommended within the first year after surgery where treatment decisions may be affected (Statement 8C).

Thiopurines are more effective than mesalazine or imidazole antibiotics alone in post-operative prophylaxis (Statement 8F). The use of internationally recognized Rutgeert’s score [3] in post-operative endoscopic assessment is beneficial (i0 and i1 imply endoscopic remission while i2- i4 imply recurrent endoscopic disease) (Table 1 and Figure 4). Absence of prophylactic treatment [EL1a, RG A] is associated with a higher risk of relapse. Prophylaxis is best started within two weeks of surgery, although an early start has not been proven superior to later treatment [EL5, RG D] (ECCO Statement 8H1). The duration of prophylaxis should be at least 2 years [EL1a, RG B]. In a randomised, Post-Operative Crohn’s Endoscopic Recurrence (POCER) trial [4], the study was conducted to evaluate a therapeutic strategy based on a risk stratification of patients, with further treatment step-up and adjustment if recurrence occurs on the basis of ileocolonoscopy. Figure 4: Rutgeert’s score in post-operative endoscopic assessment. Neoterminal ileum with Rutgeerts scores. (A) i1, (B) i2, (C) i3 and (D) i4.

The study involved 17 centers from Australia and New Zealand with 174 patients who had intestinal resection were enrolled. In the active care group, endoscopic recurrence was defined at 6-month colonoscopy using the Rutgeerts’ score; if the score was ≥ i2, the treatment was stepped up to thiopurine, adalimumab every 2 weeks combined with thiopurine or weekly adalimumab. In relation to our case above, our patient developed small bowel obstruction as a complication of Crohn’s colitis leading to emergency surgery. Among the initial presentation differential diagnosis include bowel adhesion with the previous surgical history and intra-abdominal abscess. Nutritional support is crucial at the time of and post-surgery.

Patients deficient in nutritional status should be supplemented, preferentially prior to surgery, to give a better surgical outcome. In our case, Infliximab was used as propylactic treatment post op to reduce risk of relapse. As per the guidelines, a colonscopy was arranged in six months for our patient to reassess the anastomosis site and exclude disease recurrence.

Small bowel obstruction is one of presentation complication features of Crohn’s colitis. Surgical treatment should not be viewed as last resort or treatment failure but as part of overall management plan. Post-operative prophylactic treatment is crucial to reduce recurrence risk. Ileocolonoscopy should be performed within 6-12 months after surgery to guide further management.