Background and aims: To devise an effective monitoring system for detecting cerebral infarction in severely atherosclerotic patients without atrial fibrillation.

Study patients: Atherosclerotic patients (284; men: 97, women: 187; age: 35-96 years old; mean: 71.6 ± 10.7 years old) who had been treated during the period fromDecember 2006 to September 2008(40 months) in our clinic (established as an annex of the Thrombosis Chemical Institute) were enrolled in this study. Participants with hypertension, hyperlipidemia, ischemic heart disease, or brain lacunar infarction without neurological symptoms were appropriately treated during the observation period. Patients with congestive heart failure, acute myocardial infarction, angina attack, chronic renal failure (serum creatinine>2.1 mg/dL), collagen disease, disseminated intravascular coagulation, acute stroke, varicose veins of the legs, venous thrombosis, acute inflammatory conditions, neoplasm, and recent trauma or surgery were excluded. CAVI and IMT were measured within 2 months after being enrolled. Patients showing symptoms of transient ischemic brain attacks, dizziness, vertigo, and muscle weakness of the extremities were extensively examined by brain MRI (magnetic resonance imaging). Patients showing lacunar infarction or ischemic patterns on MRI received a low dose of aspirin (81 mg/day). After the observation period, the number of patients showing clinical brain infarction was counted. Criteria for clinical brain infarction were as follows: Patients with both MRI spots on T1, T2, or especially diffusion-weighted imaging andconcurrently observed clinical symptoms including muscleweakness of the extremities, speech disturbance, or disturbance of the visual field. Stratification of participants was carried out according to the criteria of CAVI 8.0 and IMT 1.1 mm. That is, patients were divided into 2 groups: group A (mildly atherosclerotic patients: CAVI8.0 and IMT>1.1 mm). Moreover, Group B was divided into subgroups B, D+ and B, Dbased on whether the level of D-dimer exceeded 1.0 μg/mL or not. In group B, D+, the level of D-dimer was counted if it exceeded 1.0 μg/mL once or more during the observation period, whereas it did not exceed 1.0 μg/ml at all in subgroup B, D- during the period. Diseases and medications of patients are summarized in Table 1. This study was approved by the ethics committee of the Thrombosis Chemical Institute. Informed consent was obtained from all patients prior to the study.

Platelet aggregation: Platelet (Plt) aggregation was measured promptly after blood sampling using a whole-blood impedance aggregometer (Chrono-log, USA) [24] at the clinic.Collagen was added as a stimulator at a final concentration of 5 μg/mL. The degree of aggregation was directly expressed as Ω. The normal range of values was 15 ± 4.3 Ω.

CAVI: CAVI was measured in a supine position with the monitoring of electrocardiograms and phonocardiograms using CAVI-VaSera VS-1000 (Fukuda Denshi, Tokyo, Japan). The principle method and assay procedures were as described previously [25]. Briefly, cuffs were applied to the bilateral upper arms and ankles, with the subject lying supine and the head held in a midline position. After resting for 10 min, the measurement was started. After automatic measurement, the obtained data were analyzed using VSS-10 software (Fukuda Denshi), and the left and right CAVI values were calculated. The average values of the left t and right CAVI were used for analysis. CAVI in patients without signs of atherosclerosis was less than 8.0.

IMT: IMT evaluation was performed with an ultrasound device (Xario SSA-660A, Toshiba Medical Systems Co., Japan) using a 7.5- MHz probe equipped with a Doppler system [26]. IMT was measured on the left and right sides of the carotid artery within 1 cm before the bifurcation and at the bifurcation. The mean IMT was calculated from the four points of IMT.

Statistical analysis: The skewness and kurtosis of data were checked. Mann-Whitney U tests were performed for medians. Student’s t-tests were used for means. The Kruskal-Wallis test was carried out for comparison of D-dimer of the different groups. Chi-square tests with Yates’ correction were carried out. Values are expressed as the mean ± standard deviation (SD) except for medians. A p-value of less than 0.05 was considered significant. All statistical analyses were performed using Excel Analysis.

Stratification of the subjects by IMT and CAVI 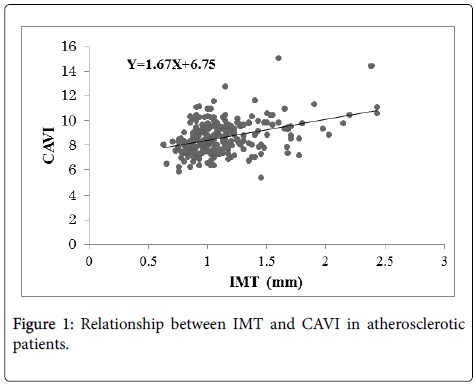 Figure 1: Relationship between IMT and CAVI in atherosclerotic patients.

Table 2 shows that values for age, SBP, pulse pressure, CAVI, and IMT were significantly higher in group B than group A, while the difference of values for male/female ratio, BMI, and DPB were not significant. The difference in age between group A (62.2 years old) and B (76.8 years old) was significant. It was revealed that laboratory data were higher in group B than group A, suggesting that the influence of age was not negligible.

Table 2: Clinical parameters of groups A and B.

Table 3: Laboratory data of groups A and B.

Table 4: Incidence of cerebral infarction in groups A and B.

After the stratification of group B by the level of D-dimer, high (B, D +) and low (B, D-) D-dimer subgroups, between which age, male/ female ratio, BMI, blood pressure, CAVI, and IMT did not significantly differ, were obtained (Table 5). Moreover, Table 6 shows that D-dimer of subgroup B, D+ (1.5 μg/mL) was 3-fold higher than that of subgroup B, D- (0.3 μg/mL), while differences in TG, BUN, Cr, fibrinogen, UA, Alb, and Hb were small and other laboratory data did not differ.

Table 5: Comparison of clinical data between groups B, D+ and B, D-.

Table 6: Comparison of laboratory data between groups B, D+ and B, D-.

Comparison of the rate of aspirin intake and incidence of cerebral infarction in subgroups B, D+ and B, D- 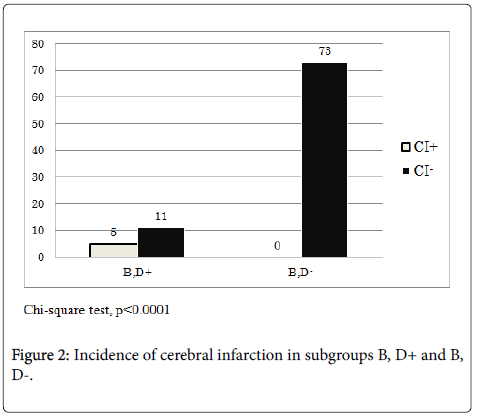 Figure 2: Incidence of cerebral infarction in subgroups B, D+ and B, D-.

Recently, the clinical importance of the early detection or effective prevention of stroke has increased. For this purpose, it is significant to identify a higher risk group for cerebral infarction in atherosclerotic patients without atrial fibrillation.

We could extract the most severely atherosclerotic and highly thrombotic patients using stratification of IMT, CAV, and D-dimer, and finally identified a significant difference in the incidence of cerebral infarction. In the subgroups B, D+ and B, D-, the rate of aspirin intake did not differ, indicating that cerebral infarction occurred without the influence of aspirin.

Regarding the stratification of atherosclerotic patients by CAVI and IMT, the incidences of cerebral infarction in subgroups B, D+ (CAVI>9.0, IMT>1.1 mm, D-dimer>1.0 μg/mL) and B, D- (CAVI<9.0, IMT<1.1 mm, D-dimer<1.0 μg/mL) were 3/7 (42.9%) and 1/47 (2.1%, chi-square test, p<0.01, data not shown in the results), respectively, suggesting that the difference in the level of CAVI (8.0 or 9.0) was not essential. The incidences of cerebral infarction in group B and subgroup B, D+ were 5.6and 31.3%, respectively, while that of apoplexy in the Japanese population aged more than 40 years is about 0.6% [34], suggesting that our methods to extract a high-risk group for cerebral infarction is highly effective. Incidences of stroke in paroxysmal and chronic atrial fibrillation were 2 and 5%, respectively [35]

In conclusion, the combination of CAVI, IMT, and D-dimer is a useful tool to detect cerebral infarction in atherosclerotic patients without atrial fibrillation.

Copyright: © 2016 2017 Hayashi S. This is an open-access article distributed under the terms of the Creative Commons Attribution License, which permits unrestricted use, distribution, and reproduction in any medium, provided the original author and source are credited.