Copyright: © 2017 Kikuchi D, et al. This is an open-access article distributed under the terms of the Creative Commons Attribution License, which permits unrestricted use, distribution, and reproduction in any medium, provided the original author and source are credited.

Objectives: For safe and speedy colorectal endoscopic submucosal dissection (ESD), it is desirable that the endoscopist operates the endoscope and treatment device simultaneously. We developed a new device, named Smart ShooterÂ® (SS), and introduced it for colorectal ESD. Methods: SS is a loop-shaped channel extender that allows the endoscopist to operate the endoscope with the right hand while manipulating a treatment device with the right thumb. During a 1-year period after introduction of SS, colorectal ESD using SS was performed on 13 consecutive patients by a single endoscopist. The outcome of these patients were compared with that of 13 consecutive patients treated by the conventional technique before introduction of SS, with respect to treatment-related factors. Results: All patients in the SS and conventional groups were treated by en bloc resection, with no serious complications. The use of SS reduced the procedure time from 84.1 to 67.5 min and improved the dissection speed from 16.4 to 20.7 mm2/min, although. Before introduction of SS the clinical path was adhered to by 61.5% (8/13) patients. After introduction all patients (13/13) adhered to the clinical path. Conclusion: SS may contribute to safe and speedy colorectal ESD.

The introduction of endscopic submucosal dissection (ESD) has enabled the en bloc resection of large lesions, lesions with scar formation, and lesions formed on intestinal folds, which could not be resected en bloc by the conventional endoscopic mucosal resection (EMR) technique [1,2]. The en bloc resection of a lesion with a negative margin has significant clinicopathological benefits, such as eliminating the risk of residual or recurrent tumors and enabling an accurate pathological diagnosis.

Colorectal ESD is increasingly popular as an effective therapeutic technique but is technically demanding and associated with a risk of serious complications, such as perforation. Although various attempts have been made to overcome the technical difficulty of ESD, many of these attempts have focused on how to apply traction for more precise identification of the submucosal layer to be dissected [3-7]. It is a frequent experience that the layer to be dissected is identified, but the visual field is lost during manipulation of the treatment device. Smart Shooter® has been developed as a solution to these problems [8-10]. The objective of this study was to evaluate the usefulness of Smart Shooter® in colorectal ESD. 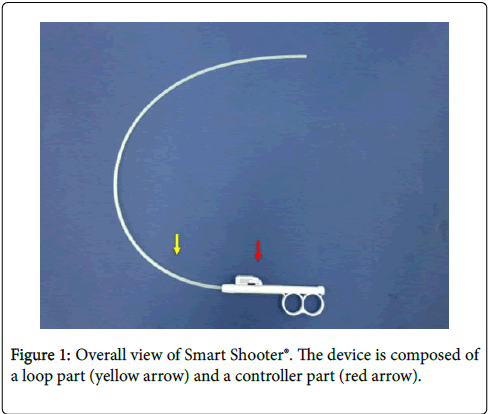 Figure 1: Overall view of Smart Shooter®. The device is composed of a loop part (yellow arrow) and a controller part (red arrow). Figure 2: Smart Shooter® with a treatment device attached is inserted into an endoscope. The use of Smart Shooter® allows the operator to grip the endoscope with his/her right hand as usual while manipulating the knob of the controller part with the right thumb to control the device (Figure 4 and 5). Figure 4: Use of the Smart Shooter® during protrusion of the ESD knife. Figure 5: Use of the Smart Shooter® during reception of the ESD knife.

Smart Shooter® has received regulatory approval and has been put into clinical use since March 2014 [10]. A single endoscopist performed colorectal ESD with Smart Shooter® on 13 consecutive patients during a 1 year period from March 2014.

The outcomes of these patients were compared with those of a historical control group consisting of 13 patients treated by the same endoscopist before introduction of Smart Shooter® (conventional group), with respect to various treatment-related factors, including en bloc resection rate, negative margin rate, perforation rate, muscle layer damage rate, procedure time, dissection speed, postoperative fever of ≥ 38°C, and adherence to the clinical path.

Adherence to the clinical path was defined as the patient starting to eat the day after the ESD procedure, based on a comprehensive assessment of the procedural safety of ESD by an attending physician, followed by discharge from hospital in good shape.

The baseline characteristics of lesions in patients in the conventional and Smart Shooter® groups are summarized in Table 1. No significant differences were observed between the groups with respect to age, sex, lesion size, and lesion location.

One of the patients in the conventional group was found to have a submucosally invasive carcinoma. Two patients had poorly defined horizontal margins, which were attributed to cauterization during the resection procedure. These patients had negative vertical margins. No recurrence was detected during the follow-up period. In the Smart Shooter® group, all lesions were localized in the mucosal layer.

One patient had a poorly defined horizontal margin, which was also attributed to cauterization, but there was no recurrence. All patients had negative vertical margins.

The results of treatment-related factors are summarized in Table 2. No serious complications, such as perforation and massive hemorrhage, were observed in either group. Muscle layer damage was observed in 1 and 2 patients in the Smart Shooter® and conventional groups, respectively. In all cases, damage was confined to the superficial muscle layer and did not require clipping. Postoperative fever of ≥ 38°C was observed in 2 patients in the conventional group, which was successfully treated with antibiotics.

The large intestine has a thin wall and winding tubal structure, which are factors that increase the technical difficulty of ESD. Colorectal ESD must be performed safety, because if perforation occurs, it is highly likely to lead to peritonitis. For improved safety, colorectal ESD requires higher accuracy of knife control than ESD for other organs. Mucosal incision should be performed with the tip of the knife properly placed on the mucosal surface. When using Dual Knife, the endoscopist must perform the incision slowly while looking at a white chip on the tip of the knife. During dissection, it is important to visually identify the layer to be dissected by applying an appropriate amount of traction and maintaining the endoscopic view. During colorectal ESD, the endoscope easily comes off especially at hepatic and splenic flexures and at the sigmoid colon, and obtaining the same view may be complicated by re-looping of the distal intestine. The use of Smart Shooter® has made it possible to maintain a good operative view while performing the incision and dissection procedures, which is considered an ideal form of endoscopic treatment.

There are several points to be considered when using Smart Shooter®. The first point is the selection of an appropriate scope and knife. Smart Shooter® is a loop-shaped channel extender and requires the use of a knife of a certain length. With a colorectal endoscope, it is particularly difficult to use conventional 195 cm knives, such as Dual Knife and Flush Knife, due to insufficient length of the device. The use of an upper gastrointestinal endoscope permits the use of these knives in the rectum and sigmoid colon. Even with a colorectal endoscope, these knives can be used with Smart Shooter® with its loop part cut to a shorter length, although a short length of the loop part may limit the manipulation of the endoscope. Elongated devices, such as Splash M Knife of a 230 cm length [10,11], are increasingly developed and introduced into the market. The availability of these elongated devices will increase. There is no consensus regarding the type of devices to be used with Smart Shooter® for ESD. In this study, we only used the knife with Smart Shooter®. Although it is relatively easy to insert and removed a device from Smart Shooter®, the knife insertion/removal procedure is still rather complicated compared with conventional devices. Therefore, once Smart Shooter® was attached to a knife, the device was used without removing Smart Shooter®. When local injection or hemostasis was performed, the knife was removed along with Smart Shooter® and replaced with a different device.

The limitations of this study include the retrospective nature of the study with a small number of patients treated by a single endoscopist. In addition, the data were obtained by a highly experienced endoscopist who developed Smart Shooter®. The use of this device requires a certain level of experience and appears to have a learning curve. Since the endoscopist has experienced over 100 cases of colorectal ESD, it was unlikely that the endoscopist's skill levels changed during the study period. We therefore considered it justifiable to evaluate the usefulness of Smart Shooter® in colorectal ESD compared with the conventional technique using a historical control.

We are planning to conduct a multicenter, prospective, randomized study to verify the true usefulness of the device.

In conclusion, we noted no significant adverse event associated with the use of Smart Shooter® in colorectal ESD. The use of the device reduced the procedure time and improved the dissection speed. It also reduced the incidence of postoperative fever and improved adherence to the clinical path, suggesting that Smart Shooter® is a useful device that allows for more safe and speedy colorectal ESD.

Smart Shooter® was developed jointly by TOP Corporation, Tokyo, Japan, and the author. After the device has been marketed, its patent royalty will be paid to the author.