Copyright: © 2015 Elkady EF, et al. This is an open-access article distributed under the terms of the Creative Commons Attribution License, which permits unrestricted use, distribution, and reproduction in any medium, provided the original author and source are credited.

A rapid, precise and selective RP-LC method was developed for simultaneous determination of the widely used oral antidiabetic; metformin hydrochloride (MTF), with some commonly prescribed oral antidiabetics, namely; sitagliptin phosphate (SIT), pioglitazone hydrochloride (PGZ), gliclazide (GLZ), glibenclamide (GLB) and repaglinide (RPG). The chromatographic separation carried out using gradient elution mode with acetonitrile: 0.05M potassium dihydrogen phosphate (MKP) and 0.01M sodium octane sulphonate (SOS) (pH 3.55) at flow rate 0.85 ml/min on Kromasil 100-C18, (30 × 0.4 cm, 10 μm) at 40°C. UV detection was carried out at 220 nm. The method was validated according to ICH guidelines. Linearity, accuracy and precision were satisfactory over the concentration ranges (μg/ ml) of 0.05-205 for MTF, 0.05-100 for PGZ, GLB and SIT, 0.1-100 for RPG and 1-100 μg/ml for GLZ. The correlation coefficients were >0.99 for all analytes. Limits of quantification (LOQs) found were 0.002, 0.003, 0.009, 0.012, 0.007 and 0.024 μg/ml for MTF, SIT, PGZ, GLZ, GLB and RPG respectively. The developed method is specific and accurate for quality control and routine analysis of the cited drugs in their pharmaceutical preparations. It is recommended for application in the quality control of the herbal antidiabetic products to detect possible counterfeits. 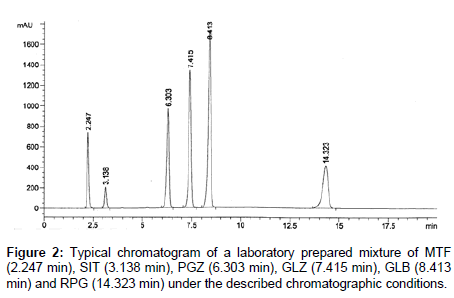 Accurately measured aliquots were transferred from the standard stock solutions of MTF, SIT, PGZ, GLZ, GLB and RPG; into separate sets of 10 ml volumetric flasks to prepare concentrations equivalent to 0.05-205 μg/ml for MTF, 0.05-100 μg/ml for SIT, PGZ and GLB, 0.1-100 μg/ml for RPG and 1-100 μg/ml for GLZ. Solvent mixture C was used to complete each flask to mark. The calibration graphs were obtained by plotting the area under the peak versus the concentration of each drug in μg/ml and the corresponding regression equations were derived.

Assay of cited drugs in bulk

The procedure described under “Construction of Calibration Graphs” was repeated for concentrations equivalent to 15-90 μg/ml for each of MTF, SIT, PGZ, GLB and RPG and 30-90 μg/ml for GLZ. The mean recovery values were calculated using the corresponding regression equations.

Ten tablets of each of Glucovance, Januvia, Actos 30, Diamedizen 60 and Novonorm 0.5 were separately weighed, powdered using mortar and pestle to fine particle size. An amount of the powder equivalent to 500 mg, 123.9 mg, 30 mg, 60 mg, 5 mg and 0.5 mg for MTF, SIT, PGZ, GLZ, GLB and RPG; respectively were separately weighed and transferred into a set of 100 ml volumetric flasks. Approximately 50 ml of solvent mixture C were added, sonicated for 10 minutes with frequent shaking. Solutions were diluted to volume with solvent mixture C and were filtered through 0.45 μm filter paper. The first 10 ml of the filtrates were discarded then the filtrates were diluted to the appropriate concentrations (μg/ml) (10-180), (5-96), (29-90), (30-95), (5-75) and (1.5-72) for MTF, SIT, PGZ, GLZ, GLB and RPG respectively. Standard addition technique was also carried out. The mean recovery values of the pharmaceutical products and added standards were calculated using the corresponding regression equations.

Four Samples of herbal bulk powders and tea bags (Figure 3A-3D) that were under suspicion of adulteration with undeclared synthetic drugs were purchased from local herbal druggists and retail outlets. According to the labels on the boxes, the products contain herbal ingredients and were declared as anti-diabetic and anti-obesity formulations. These products were mainly from suburbs of Cairo. One teaspoonful from each of the 3 herbal bulk powders and one teabag from the fourth sample were each transferred into a 100 ml volumetric flask, extracted in 50 ml solvent mixture C by sonication for 10 minutes with frequent shaking, then diluted to volume with the same solvent, mixed and filtered through 0.45 μm filter paper. The first 10 ml of the filtrates were discarded then an aliquot of 2 ml was transferred from each preparation to a series of 10 ml volumetric flasks and diluted to volume with solvent mixture C. Another series of corresponding dilutions that were spiked with 10 μg/ml MTF, SIT, PGZ, GLZ, GLB and RPG were also prepared.

The main concern of this work was to develop a fast and validated LC method suitable for the determination of some well-known antidiabetic MTF, along with commonly prescribed oral antidiabetic drugs from different pharmacological classes. Besides, the proposed method will be useful for the detection of counterfeits in antidiabetic therapy.

During the optimization cycle, different columns with different lengths and internal diameters were tried namely, Waters symmetry C18 (30 × 0.4 cm, 10 μm) and Supelco supelcosil C18 (25 × 0.46 cm, 5 μm) but finally satisfactory separation was obtained on Teknokroma kromasil 100-C18 (30 × 0.4 cm, 10 μm) column. Methanol and acetonitrile were examined individually and simultaneously as organic modifiers and acetonitrile was found to be more suitable, individually, as it allowed better separation of the six analytes under investigation. Isocratic mode of elution with different ratios of organic to aqueous phases was tried and it was found unsuitable so gradient elution mode was attempted. Different gradient elution modes were tested in order to achieve proper separation of the cited analytes in a reasonable run time. The described gradient elution mode stated in section 2.3 was selected. The use of 0.05M MKP buffer was necessary in this method in order to influence the ionization of the analytes and to help in their co-elution. Also, it kept the pH constant as each of MTF, PGZ, GLZ, GLB and RPG is obviously affected by the mobile phase composition and pH. The effect of pH on the separation of the analytes was studied. It was found that pH higher than 4.59 was not suitable as due to improper separation of the analyzed compounds. pH was adjusted at 3.55 for the best separation of the six analytes in a reasonable run time (<15 min) and with good resolution between all peaks (Figure 2). Different flow rates were studied and flow rate of 0.85 mL min-1 was found to be optimum. Quantitation was achieved with UV-detection at 220 nm. Many trials were done to enhance symmetry and sharpness of peaks and hence improve the resolution of the cited drugs. Addition of 10mM sodium octane sulphonate, as ion pairing agent, produced significant improvement. The use of optimized mobile phase containing acetonitrile and buffer (0.05 M MKP + 0.01 M SOS, pH: 3.55) (50:50 v/v) instead of methanol as a solvent led to good peaks` symmetry, sharpness and best resolution between the cited analytes (Figure 2). The retention times for MTF, SIT, PGZ, GLZ, GLB and RPG were 2.24, 3.13, 6.30, 7.41, 8.41 and 14.32 min respectively. The system suitability tests were used to verify that the conditions of the chromatographic system were adequate for the separation and hence for the analysis [60] (Table 1).

Validation of the proposed RP-HPLC method was performed with respect to linearity, limit of detection (LOD), limit of quantitation (LOQ), accuracy, precision and robustness according to ICH guidelines [60].

Linearity: Linearity was assessed for the six oral antidiabetic drugs at concentration ranges 0.05-205 μg/ml for MTF, 0.05-100 μg/ml for SIT, PGZ and GLB, 0.1-100 μg/ml for RPG and at 1-100 μg/ml for GLZ. A linear relationship was established at these ranges between Area under the peak (AUP) and concentration. Good linearity was proved by high values of coefficient of determinations. The calibration data are shown in Table 2.

Table 2: Characteristics and Results of the Proposed RP-LC Method.

Accuracy and precision: Accuracy of the method was proved by recovery study of each of MTF, SIT, PGZ, GLZ, GLB and RPG in bulk, in their synthetic mixtures of their medicinally recommended ratios and by standard addition technique. Results of recovery tests are summarized in Table 2. Repeatability (intra-day) and intermediate precision (inter-day) were assessed using three concentrations and three replicates of each concentration. The relative standard deviations were found to be small indicating reasonable repeatability and intermediate precision of the proposed method (Table 2).

Robustness: Robustness test was performed by applying small deliberate changes to the chromatographic conditions. The most important parameters studied under this test were flow rate (changed by ± 0.1), mobile phase composition-acetonitrile percent (changed by ± 2 in all levels of the gradient program) and pH value of the buffer component of the mobile phase (changed by ± 0.1). Each of the previous parameters were changed while keeping the other parameters constant. The resolution factors between each two successive peaks were calculated for each change. The resolution factors under different parameters of robustness are summarized in Table 1. Robustness test revealed good values of resolution that were not significantly changed by minor changes in the chromatographic conditions, which indicates the good robustness of the proposed LC method.

A quick, selective, specific and validated RP-LC method for the simultaneous determination of six commonly used oral antidiabetics, namely; metformin hydrochloride, sitagliptin phosphate, pioglitazone hydrochloride, gliclazide, glibenclamide and repaglinide. This method is characterized by simplicity, accuracy, preciseness besides its wide range of applications and it can be used for routine analysis and quality control of the cited drugs separately or in combinations in many dosage forms. The developed method proved suitability for the detection of counterfeit drugs.