Validation and Development of HPTLC Method for Simultaneous Estimation of Apigenin and Luteolin in Selected Marketed Ayurvedic Formulations of ‘Dashmula’ and in Ethyl Acetate Extract of Premna integrifolia L.

Copyright: © 2017 Attarde DL, et al. This is an open-access article distributed under the terms of the Creative Commons Attribution License, which permits unrestricted use, distribution, and reproduction in any medium, provided the original author and source are credited.

Dashmula are specific ayurvedic combination of ten roots used for various disorders of liver, kidney, uterus. Standardisation of herbals are necessity for efficacy and quality parameter as per WHO guidelines. Therefore, through this original research attempt was made to standardise one of ‘Dashmula’, P. integrifolia and selected batches of marketed formulation using Apigenin and Luteolin as active biological marker for simultaneous quantification and fingerprinting through developed and validated HPTLC techniques. Developed mobile phase Toluene: Ethyl acetate: Formic acid (6:4:0.15) gave Rf (Retention factor) 0.39 and 0.29 for Standard Apigenin and Luteolin respectively at 347 nm iso absorptive wavelength. The ethyl acetate extract of P. integrifolia (PI-ET), ‘Dashmularishtha’: Manufactuer 1; 3 coded batches as DF1, DF2, DF3, Manufacturer 2; 3 coded batches -as BF4, BF5, BF6, ‘Dashmulkadha’: Manufacturer 3; 3 coded batches as KF, KF8, KF9 were found to contain : 12.8% w/w, 0.294 mg/ml%, 0.429 mg/ ml%, 0.314 mg/ml%, 0.077 mg/ml%, 0.071 mg/ml%, 0.145 mg/ml%, 0.176 mg/ml%, 0.242 mg/ml%, 0.098 mg/ml% of Apigenin and 4.7% w/w, 0.542 mg/ml%, 0.365 mg/ml%, 0.569 mg/ml%, 0.343 mg/ml%, 0.311 mg/ml%, 0.607 mg/ ml%, 0.812 mg/ml%, 0.828 mg/ml%, 0.439 mg/ml% of Luteolin respectively. In stem powder of P. integrifolia 19.84 mg/gm% Apigenin and 7.433 mg/gm% Luteolin was calculated. The estimation shows variance in manufacturers and even within batches, but will be quality control parameter. The method was validated for specificity, linearity, accuracy, precision, and robustness. It was found to be linear in range of 40-120 ng/band with regression coefficient 0.9983, 0.9997 for Apigenin and luteolin. Percentage recovery study carried out for extract PI-ET and DF1 with spike of Apigenin and Luteolin at 80, 100 and 120% level, carried out for inter and intraday precision, subjected for one way ANOVA and found F value is below tabulated F(2,6) value 5.14, therefore there is no significance variance of obtained values.

More number of people worldwide switching once again towards the alternative system of medicines to avoid harmful side effects of synthetic drugs. As per WHO it is essential to establish quality standards for herbals. Thus, standardization of crude drugs and their formulations are at urgent need [2].

As per literature, diterpenoids reported from the root bark, a verbascoside iridoid glucoside from leaves [8], two alkaloids, Premnine and Ganiarine, have been isolated from it and their physical and chemical properties described [9]. Volatile oil from flower bud, distillate and its fractions were analyzed by GC and GC/MS and the major components are 1-octen-3-ol (16.9%), (Z)-3-hexenol (10.2%) [10-12]. Isolation and evaluation of flavonoid i.e., Luteolin 7-0-methyl ether and apigenin 5,7-0-dimethyl ether from P. serratifolia's leaves [13-18].

Table 1: Validation parameter for estimation of apigenin and luteolin in extract and formulation.

Table 2: Estimation of apigenin and luteolin in PI-ET extract and selected marketed Dashmulaformulations.

Apigenin, 4', 5, 7-tetrahydroxy flavone, is recognized as a bioactive flavonoid shown to possess exerts anxiolytic effects by acting as a benzodiazepine ligand, anti-inflammatory, antioxidant, anticancer properties particularly cancers of the breast, digestive tract, skin, prostate and certain hematological malignancies and even protective for cardiovascular and neurological disorders [4].

This research is first attempt for standardisation of ‘dashmul’ using two flavonoids simultaneously, along with raw plant extract.

Stem powder of P. integrifolia: Agnimanth are distributed through flora of Trimbakeshwar forest area of Nashik District. Few of them identified, spotted stem branches were collected and herbarium was prepared. These was deposited to Botanical Survey of India, Pune for identification purpose. Certificates were issued as i.e., Ref.: BSI / WRC/Tech./2012/DVR-1 dt. 02/1/2012 for Premna integrifolia L. (Verbenaceae). Stem branches were cut into small pieces, dried under shade for about 15 days, milled, shifted through sieve 25/30 no.-600 μ. Dried powder packed in air tight container and stored to cool, dry condition.

Standard apigenin solution: 5 mg of standard apigenin was dissolved in 5 ml of alcohol in volumetric flask (1000 ppm), sonicated, and marked as Stock solution. Working stock prepared to obtain 20 ppm. (20 ng/μl) from it, designated as- AS.

Standard luteolin solution: 5 mg of standard Luteolin was dissolved in 5 ml of alcohol in volumetric flask (1000 ppm), sonicated and marked as Stock solution- Working stock prepared to obtain 20 ppm. (20 ng/μl) from it, designated as - LS.

Fingerprinting and specificity of apigenin and luteolin standard in PI-ET and in DF1, BF4, KF7

The HPTLC analysis for fingerprinting and specificity of Apigenin and Luteolin standard done using developed parameter as above, applying on track- AS, PI-ET, DF1, BF4, and KF7, LS, plates developed as above and scanned in detection (347 nm) and spectral mode (200-400 nm). Rf obtained for AS and LS, identified and marked in PI-ET, DF1, BF4, KF7. The identified bands spectral scan over laid for confirmation of specificity. The purity of the bands was confirmed at start, middle and end position of chromatogram. The plate was derivatized with NPPEG reagent and chromatogram visualized at 366 nm in florescence mode as shown in Figures 1a-1c. 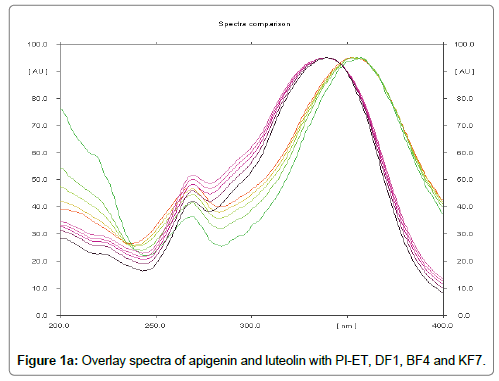 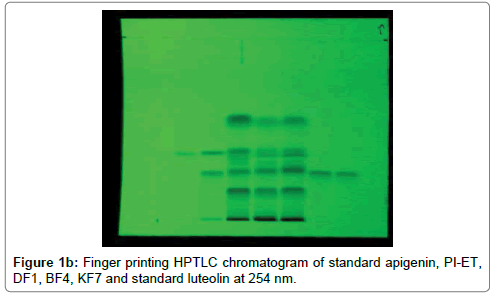 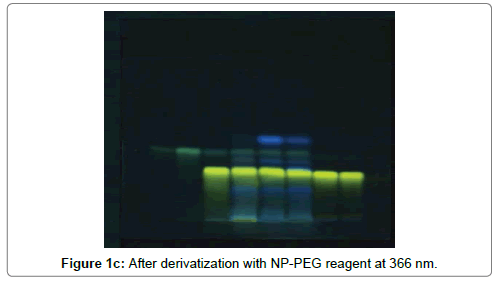 Figure 1c: After derivatization with NP-PEG reagent at 366 nm.

Chromatogram developed till 90 mm in above mobile phase, scanned at 347 nm and recorded as per above developed condition at Rf- 0.39 for Apigenin and Rf-0.29 for Luteolin. Such procedure repeated thrice and average Area Under Curve(AUC) noted. Standard linearity calibration curve for both standard prepared separately by plotting AUC vs conc. in ng, using linearity calibration curve of apigenin and luteolin concentration in PI-ET calculated as per Figures 2a and 2b.

Validation of HPTLC method: The method was validated as per International Conference on Harmonization Guidelines- Q2 (R1), 2005. Linearity for Apigenin and luteolin standard were studied in range of 40-120 ng /band for both. The calibration curve developed by plotting Peak area vs Conc. in ng, regression equation with slope, intercept and coefficient of correlation was calculated Table 3.

The Limit of detection (LOD) and limit of quantification (LOQ) were calculated using equation:

Accuracy (% recovery): The accuracy of the method was established by performing recovery experiments over known concentration on Extract -PI-ET and formulation DF1 at 80%, 100% and 120% spike of AS and LS separately in triplicate for each experiment and analyzing it with %RSD. As per Table 4a.

Intermediate precision: Precision study for Standard AS and LS done for three concentration as 40, 80, 120 ng/band, done in triplicate for intraday and inter day precision.

Precision study over recovery method for PI-ET and DF1 done separately in triplicate for 80%, 100% and 120% spike of AS and LS triplicate for intraday and inter day precision with 3 × 3 model for each experiment and analyzing it with %RSD.

Repeatability precision: The repeatability of the method was assessed by three concentration 40,80,120 ng/band in triplicate for each AS and LS done. The percentage relative standard deviation was expressed as Tables 3a and 3b.

That confirms presences and helped for fingerprinting of Apigenin and luteolin bioactive flavonoids in PI-ET and in selected formulations.

The calibration curve of Standard Apigenin and Standard Luteolin was found to be linear in range of 40-120 ng/band for both, with good regression coefficient 0.9983, 0.9997 for Apigenin and luteolin respectively. Table 1 summaries the validation parameter.

Estimation analysis for Extract PI-ET and formulation as shown in Table 2 indicates high %value for PI-ET extract due to highly purified flavonoid fraction from extract. Variability observed between manufactures and even within batches.

Resolution of extract and formulations are better while estimating apigenin and luteolin simultaneously as shown in Figures 3a-3l. Accuracy study with %recovery at three concentration level performed in PI-ET and in one of formulation DF1 shows result as per Table 4a Precision study with repeatability performed over low, mid high concentration over both standard expressed as %relative standard deviation inters and intraday as per Tables 3a and 3b.

Accuracy with% recovery in PI-ET and DF1 at 80, 100, 120 %level with spike of standard and luteolin subjected for intraday and inter day, results at each level subjected to one way analysis of variance and the F value for each level were determined as per Tables 4b and 4c. F value as ratio of BMC/WMC, compared with tabulated F(2,6) value which is 5.14 and all calculated values are below it, therefore there was no significant difference between intra and inter day variability, suggesting good intermediate precision of the method.

Hence with regards to the method development, validation and simultaneous estimation, it can be concluded that,

• PI-ET shows high %of Apigenin and luteolin due to highly purified fraction of extract.

• The result of this study though shows great variance in %content of this bioflavonoids between manufactures and even in batches but method is precise and accurate through validation therefore can be method of analysis qualitative and quantitative for quality control parameter for herbals.

We are thankful to our Institute and management for providing facility to work over HPTLC instrument. We also thanks to Prof. Sandeep Sonawane from MET’ Institute of Pharmacy, Nashik for his valuable guidance for statistical analysis.