In the present study, we examined the vitellogenin (Vg) level of Russian sturgeon maintained in a relatively constant aquaculture at a water temperature of 18-22°C during growth and maturation.

An increase in Vg in the blood plasma from oocytes was found in the yellow oocytes stage to the gray oocytes stage. However, no Vg was found in the pre-vitellogenic stage. Based on the present study and previous studies on hormone control reproduction and growth, we proposed a quality model that correlated between egg development and the hormones involved in controlling vitelogenesis (VTL).

Russian sturgeon (Acipenser gueldenstaedtii) is osteichthyes fish that belong to the Osteichthyes class, Acrinopteygii sub-class, Acipenseriformes order and Acipenseridae family [1]. Russian sturgeon are one of the most ancient groups of A. gueldenstaedtii belonging to the distribution of this osteichthyes group found along the coasts of the Atlantic and Pacific Oceans, in the Mediterranean and Black Seas, and in many rivers, lakes and inland seas [2]. The decline of sturgeon populations in their native habitats, mainly in the Caspian Sea, is due to overfishing for meat and caviar production. This has led to the destruction of their spawning grounds and water pollution, as well as bringing about their introduction into aquaculture.

The adaption of Russian sturgeon to aquaculture conditions [3] was studied, as well as different aspects of hormone control growth and reproduction under artificial conditions in order to improve survival, rate of growth and reproduction [4-9]. Nevertheless, information on gonadal development [9] and puberty of Russian sturgeon in northern Israel aquaculture is important for caviar production, although much information about this species has still not been studied [10,11]. During oogenesis, the Vg is a phospholipoglycoprotein precursor contained in the yolk of the fish oviparous, similar to other vertebrates, and is an estrogen-induced female-specific serum protein that is biosynthesized in the liver, secreted into the bloodstream, and involved in the process of yolk formation during oogenesis. This effect on VTL (also known as yolk deposition in oocytes) is very important for processing oocytes transfer in preparation for becoming caviar, and therefore various sturgeon species were studied [10-12].

The few hormones involved in controlling VTL are mainly from the gonadotropin axis hypothalamic gonadotropin-releasing hormone (GnRH), Luteinizing (LH) and Follicle stimulating hormone (FSH) [4,7] and the somatotropin axis growth hormone (GH) and insulinlike growth factor I (IGF-I) [6,8,13], as well as the interaction between them.

The aim of the present study was to measure the level of Vg in Russian sturgeon under specific aquaculture conditions through growth and oogenesis.

Russian sturgeons were approved for study by the government since they could add to our knowledge about caviar production. Fertilized eggs of Russian sturgeon (A. gueldenstaedtii) originating in the Caspian Sea were brought from Russia and reared in the Dan Fish Farms (Upper Galilee, Israel; 31°30’N, 34°45’E) under aquaculture conditions, as previously described [9] (Figure 1). Fish were maintained in 250 m3 ponds made of concrete in 30/kg m3 at a water temperature of 18°C and 12 h photoperiod. The oxygen concentration was 6 ppm and was controlled by an oxygenic machine. Ammonia and nitrite were below 0.5 ppm. Figure 1: Description of the life cycle and growth of Russian sturgeon in the Dan Fish Farms. A – Mature females, B – females with black eggs (caviar), C – caviar eggs for sale, E – fertilized eggs originating in the Caspian Sea brought from Russia and reared in the Dan Fish Farms. D and F – containers incubating the fertilized eggs and nursing the fry after hatching, G – fingerling Russian sturgeon reared in the containers adapted to artificial food, H – fish before transfer to the growth ponds.

Baled samples from Russian sturgeon males and females were taken. Each fish was anesthetized in a clove oil bath (0.25 mg/l) and placed in a V-shaped base for examination, as described previously by Hurvitz [9]. Samples of 1 ml were collected from each fish from the caudal blood vessels. The samples were taken from females of various sizes, ages (1, 2, 3 4, 5, 6 and 7 years old) and ovary development; the stage of ovarian maturity was analyzed by endoscopy (Figure 2). 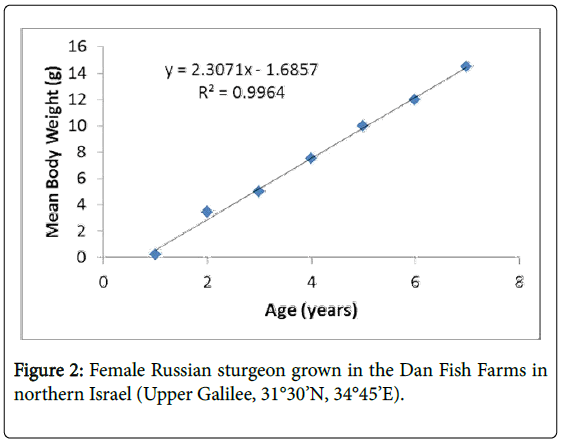 Serum was then separated by centrifugation at 1,500 RPM for 10 min and stored at 20°C until use. Serum was collected from immature females, from transparent oocytes at a diameter of 0.4 mm, and from females with ovaries in the yellow oocytes stage and the gray oocytes stage at a 2-2.5 diameter. The different states were photographed by endoscopy [9].

A histological analysis was generally performed according to [5]. Briefly, gonadal samples were fixed in Bouin's fluid for 48 h and then transferred to 70% ethanol for storage until processing for light microscopy. Paraffin sections of 4 to 7 μm were stained with hematoxylin and eosin. For a description of the gonadal stages, the terminology used by Hurvitz [9] was adopted and the histology of oocytes was described by this study. Mean oocyte diameter was calculated for each fish after measuring five of the largest oocytes present in the fixed tissue before processing. Oocyte diameter was measured using an optical binocular with notches (CETI Belgium) at an accuracy ± 50 μm.

An analysis was made for the protein transfer using a Western blot membrane (Biorad, USA) with TBS (20 mM Tris-HCl, 150 mM NaCl, pH 7.5). To label the marking of the VTG, the membranes were incubated for two hours with mouse anti-Gulf sturgeon VTG (Biosense Laboratories, AS diluted 1:250) at room temperature and washed three times with TBS (20 mM Tris-HCl, 150 mM NaCl, pH 7.5) including 0.05% Tween. For the second incubation, IgG (TBS-T horse radish peroxidase conjugated to goat anti-mouse IgG) was used for 1 h and then washed again as described previously. The marked bands were identified by ECL (Amersham-Pharmacia-Biotech).

The fish were maintained in a relatively constant aquaculture at a water temperature of 18°C during growth and maturation under very specific conditions (see Materials and Methods) (Figure 1). The growth curve from 1 to 7 years is linear, as described in Figure 2. The formula of female growth is Y=2.3071X – 1.6852. The correlation coefficient R2=0.9964 is very high. In female Russian sturgeon, the oocytes were found in the pre-vitellogenic stage five years before, and then part of the oocytes start the vitellogenesis as described previously by Hurvitz (Figure 3) [9]. The Vg level in the plasma of Russian sturgeon increases from oocytes found in the yellow oocytes stage to the gray oocytes stage. However, no Vg was found in the pre-vitellogenic stage (Figure 4). Figure 4: SDS-PAGE of plasma Vg from white sturgeon. The 250 KD band represents VTG in female sturgeon. Females with ovaries full of gray eggs were used as positive control (PC) in the left panel, and male plasma was used as negative control. Numbers 141-154 refer to individual females sampled, and + or – markings in the table represent gonads stage as determined by endoscopy. The ovaries at the different states were photographed by endoscopy: yo – yellow oocytes stage, and go – gray oocytes stage. All of the oocytes in the ovary are transparent with a diameter of 0.4 mm. + A few yellow oocytes are dispersed in ovaries smaller than 1 mm. + + Many yellow oocytes are dispersed in ovaries with a diameter of 1-2 mm. +++ All of the ovaries contain yellow or gray oocytes with a diameter of 2-2.5 mm.

The present study contributes not only to providing a description of the level of Vg in the plasma of Russian sturgeon for the first time during the various stages of oocytes development of fish grown in specific aquaculture conditions in which the water is of high quality and at a constant temperature all year round, but also to comparing the results of the hormones involved in controlling reproduction specifically on the gonadotropin [4,5,7,9] and the somatotropin [6,8] axes (Figure 5). The results of the present study are in agreement with a previous study on white sturgeon, which found that plasma Vg concentrations correlated with total plasma calcium and stage of ovarian maturity [10]. However, in white sturgeon, Vg could be measured in the previtellogenic stages. Vitellogenin (Vg) is a phospholipoglycoprotein precursor contained in the yolk of oviparous vertebrates, and is an estrogen-induced female-specific serum protein biosynthesized in the liver, secreted into the bloodstream, and involved in the process of yolk formation, called VTL. Although Vg has been purified and characterized in many fish species [12], including species belonging to the genus Acipenser [10-12], the biochemical characteristics in Russian sturgeon have not been studied extensively, and we assume that there are no significant differences compared to other species belonging to the Acipenser. VTG in sturgeon grown in the Dan Fish Farms is an example of fish grown under relatively constant conditions, and the growth rate correlates to VTG. This environmental condition effect during hormone control reproduction on VTG was described in other fish under experimental conditions [14]. In the present and previous research studies carried out on Russian sturgeon grown in the Dan Fish Farms under constant conditions, the growth curve was linear. Vg might be correlated to growth, but a more specific study on Russian sturgeon under these conditions is required.

In summary, for the relationship between eggs development and hormones involved in controlling VTG based on previous studies, we suggested the quality model described in Figure 5.

Copyright: ©2017 Levavi-Sivan B, et al. This is an open-access article distributed under the terms of the Creative Commons Attribution License, which permits unrestricted use, distribution, and reproduction in any medium, provided the original author and source are credited.