Snap bean is one of the newly introduced legume crops in Ethiopia and it is an important crop in the provision of food security and earing forging currency. It responds much better to the application inorganic fertilizer especially N and P fertilizers due to lack of nodule forming bacteria in the soil and low in building of fertile soil. However, information concerning the production package of snap bean at Jimma was scares and due to this there is limited evidence in the response of snap bean to inorganic fertilizers (N and P fertilizers) which can increase yield and quality. Cognizant to this fact, the experiment was conducted to realize the effect N and P fertilizers rates on yield and yield components of snap bean at Jimma, Southwestern Ethiopia. The experiment consisted of two factors, five levels of N (0, 41, 82, 123, and 164 kg/ha) and four levels of P (0, 46, 92 and 138 kg/ha) arranged 5 × 4 in randomized complete block design with three replications. N as urea was applied in split application (50% at sowing and 50% at flowering) whereas the full dose of P was applied at sowing as triple super phosphate. There was a significant difference (P ≤ 0.05) for main effects of N and P fertilizer rates for all yield and yield component variables. Out of the whole variables tap root length were significant by the interaction effects of N and P fertilizers rate. The result showed that the maximum marketable pod yield was obtained from 123 kg/ha N and 92 kg/ha P2O5 fertilizer application rates. While, the minimum marketable pod yield was recorded from the application of 0 N and P fertilizer rate. So, form this experiment application of 123 kg/ha N and 92 kg/ha P2O5 increased the marketable pod yield of snap bean at Jimma. Since, the experiment was conducted in a single location and season. So, repeating the experiment for more seasons and similar location would help us draw sound conclusive recommendations to the end users.

In many developing countries, protein rich foods, such as meat, milk, fish are still quite expensive; hence, many people still suffer from malnutrition. For this reason, most of food scientists are doing an effort that focusing on legumes to be developed as source of nonconventional protein [1,2]. It is a warm season vegetable crop [3] grown in all continents except Antarctica [4]. It is an important vegetable crop in Africa which is grown as a cash crop by large scale and small holder farmers and more than 90 percent of the crop produced in Eastern Africa is exported to regional and international markets [5].

In Ethiopia snap bean production for export to the European markets was started by large-scale state-owned farms in the early 1970’s [6] and large-scale state-owned farms contribute 80% of snap bean produced [7] but the share of small holder out growers in production is quite small [8]. Economically it is an important crop helps for farmers since its price is by far better than other vegetable crops even in local markets of the country [9]. It also helps for farmers and their families to improve the nutrition and diversify their production system by intercropping crops such as beans and vegetables [10].

According to Katungi et al. in Ethiopia soil fertility degradation, erratic rainfall, pest pressure, poor agronomic practices and poor accessibility to good quality seed attributed to the low yield and quality of snap bean [11]. Soil acidic problem is one of the major tricky limiting snap bean production and productivity in Ethiopia [12]. In addition, soil fertility management is limited and the application of fertilizer by small holder farmers mainly depends on the blanket recommendation for snap bean in which it was practiced regardless of production area, soil type and fertility status [13].

Soil studies in Jimma area indicated that about 88% of the soil had available P below the critical level (10-15 ppm) and additionally total N also one of the limiting plant nutrients. The reason for the decline of total N in cropped fields can be N leaching problem as the area receives high rainfall and farmers have a limited cultural practice to integrate leguminous plants on their farmlands [14,15]. Furthermore, yield and yield components of snap bean improved by the applications of both macro and micro nutrient [16,17].

The experiment was conducted under field condition at Jimma University College of Agriculture and Veterinary Medicine (JUCAVM) research field in the year 2016/17 through irrigation. JUCAVM geographically located at 346 km southwest of Addis Ababa at about 70, 33’N latitude, 360, 57’ E longitude and at an altitude of 1710 meter above sea level. The mean maximum and minimum temperatures are 26.8°C and 11.4°C, respectively and the mean maximum and minimum relative humidity are 91.4% and 39.92%, respectively. The mean annual rainfall of the area is 1500 mm.

Table 1: The physicochemical properties of a soil of the experimental site.

The experiment consisted of five levels of N fertilizer (0, 41, 82, 123 and 164 N kg/ha) and four levels of P fertilizer (0, 46, 92 and 138 P2O5 kg/ha). One snap bean variety (BC 4.4) seeds were obtained from Melkassa Agricultural Research Center. The experiment was laid out in a 5 × 4 factorial arrangement in a randomized complete block design (RCBD) with three replications. The whole experimental field was divided into three blocks each containing 20 plots. The size of each plot was 2.4 m × 1.5 m (3.6 m2) having six rows, each contains 15 plants. A foot path of 0.5 m and 1.5 m were left between plots and blocks, respectively. Triple Superphosphate (TSP) (46% P2O5) was used as a source of P. Urea (46% N) was used as source of N and it was applied in two split applications (at time of sowing and flowering). All agronomic practices were kept uniform for all treatments as recommended and adopted for the location [13].

Table 3: Effect of N and P fertilizer application rates on leaf number per plant of snap bean. * Means followed by the same letter(s) are not significantly different at P=0.05.

The possible reason for the increased leaf number per plant with an increase in N application might be due to the occurrence of less nutrients competition between plants. On the other hand, application of low rate of N was resulted in increase in competition within plants which as a consequence reduced leaf number. This result in coherent with the finding of Moniruzzaman et al. [19], Elkhatib [20] and El- Awadi et al. [21] that leaf number per plant has showed a significant increment with successive application of N fertilizer rate.

With respect to P the maximum leaf number per plant was obtained from the application of 92 P2O5 kg/ha and the minimum was obtained from the control (Table 3). This might be due to the great role of P in photosynthesis, respiration, energy reaction, cell division, development of new tissue and nutrient transport in plants. The finding is at par with the work of Veeresh [22], Shubhashree [23], Moniruzzaman et al. [19] and Turuko and Mohammed [24] reported that application of P up to optimum level was improved the leaf number per plants of snap bean. 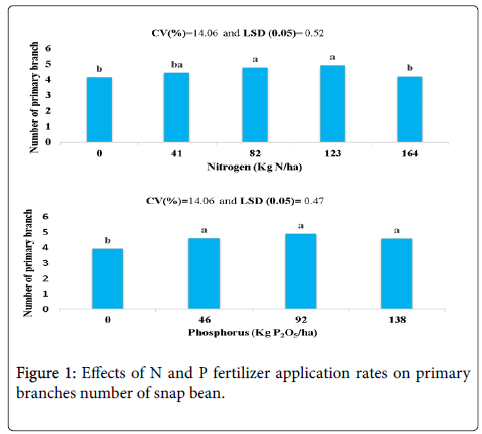 Table 4: Interaction effect of N and P fertilizers application rates on tap root length of snap bean. * Means followed by the same letter(s) are not significantly different at P= 0.05. Snap bean is one of the most cultivated leguminous vegetable in the world. Knowing the optimum rate of N and P fertilizer rate are very important factors to increase the productivity and marketability of snap bean. The study was conducted to realize the effect N and P fertilizers rates on yield and yield components of snap bean at Jimma, Southwestern Ethiopia. Yield and yield components of snap bean were significantly (P ≤ 0.05) affected both by the main and interaction effect of N and P fertilizer application. The highest number of leaf, primary branch and average marketable pod weight were obtained from N application at 123 kg/ha whereas the lowest value was recorded from the control (0 kg/ha N). The maximum marketable pod yield was resulted from plants subjected to highest dose of applied N fertilizer 123 kg/ha, in which it was statistically at par with applied 82 kg/ha. On the other hand, application P fertilizer rates on the also indicated there were a significant effect of all variables. Number of leaf, primary branch, average marketable pod weight and marketable pod yield were obtained from 92 P2O5 kg/ha which was statistically at par with the application of 46 P2O5 kg/ha. The interaction effect of N and P was significant (P ≤ 0.05) only to tap root length of growth variables. The highest tap root length value was obtained from the combined application of 123 N kg/ha and 46 P2O5 kg/ha. So, form this experiment it can conclude that application of 123 kg/ha N and 92 kg/ha P2O5 increased the marketable pod yield of snap bean at Jimma. However, repeating the experiment for more seasons and similar location would help us draw sound conclusion and recommendations.

Copyright: © 2018 Negash A, et al. This is an open-access article distributed under the terms of the Creative Commons Attribution License, which permits unrestricted use, distribution, and reproduction in any medium, provided the original author and source are credited.