Gastrointestinal stromal tumor is an uncommon tumor with most of these lesions occurring in the stomach.
Patients present with nonspecific symptoms including bleeding, abdominal pain, and abdominal mass. The diagnosis
of this tumor is made using various imaging modalities (CT, MRI and endoscopic ultrasound) and sampling
techniques (fine needle aspiration, biopsy, and surgical excision). We report the unusual case of a rare pedunculated
gastrointestinal tumor diagnosed by imaging studies, prior to surgery, as a malignant pancreatic tumor (mucinous
cystadenocarcinoma).

Gastrointestinal stromal tumor (GIST) is the most common primary mesenchymal tumor of the gastrointestinal tract [1-3]. GISTs may occur anywhere along the entire length of the tubal gastrointestinal tract, however, approximately 60% arise in the stomach. GISTs may be benign or malignant and the most useful prognostic factors are tumor size and mitotic activity. These tumors usually occur in older adults. Patients usually present with vague abdominal complaints, bleeding, or abdominal mass [4]. Usually, GISTs arise from the stomach wall and extend inward toward the mucosa and/or outward toward the serosa. While pedunculated GISTs have been reported, this pattern of growth is rare. The rarity of this lesion, coupled with the often nonspecific patients’ symptoms, often results in a diagnosis made only after surgery [5-7]. Pancreatic GISTs are extremely rare [8,9], and duodenal GIST has been reported as a large mass of the head of the pancreas [10]. We report a case of a pedunculated gastric GIST presenting as a pancreatic mass preoperatively diagnosed as malignant.

A 72-year-old woman presented with a several month history of diarrhea and constipation presented to an outside facility, where an abdominal CT showed an infrapancreatic mass measuring 12 cm. She was referred to our institution and an abdominal MRI showed an 11 cm cystic mass arising in the pancreatic tail and adherent to the stomach, consistent with mucinous cystadenocarcinoma (Figure 1). An endoscopic ultrasound showed a large solid mass with smaller soft tissue and cystic components in the body of the pancreas and FNA was performed. Straw-colored fluid was obtained and showed rare atypical cells. The blood CA19.9 level (a biologic marker of pancreatic cancer) was 1 U/ml (normal 0-37 U/ml). 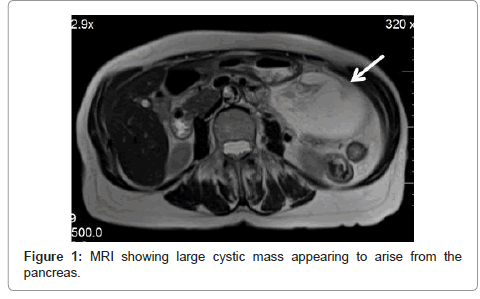 The patient underwent laparotomy and a pedunculated cystic mass was found arising from the greater curvature of the stomach without involvement of the pancreas. The tumor was completely excised with a small portion of the gastric wall surrounding the pedicle.

The specimen consisted of a rounded mass which measured 13.5 x 11.0 x 4.5 cm in size (Figure 2). The bisected specimen showed a central core of variably dense white-tan tissue, measuring 9.0 cm in greatest dimension, surrounded by multiple large cysts filled with serous appearing clear fluid. There were no areas of necrosis, hemorrhage, or calcification. 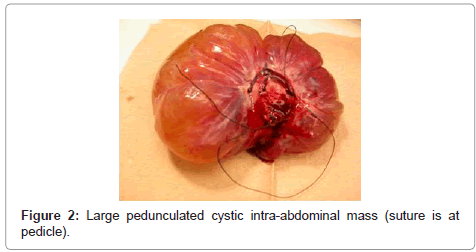 Microscopic examination showed a fairly well-circumscribed, bland spindle cell lesion. The tumor cells were vacuolated and showed palisading (Figure 3A). There were 0-1 mitotic figures per 50 high power fields of magnification with a Ki67 labeling index (proliferation rate) was less than 2%. No significant nuclear pleomorphism, abnormal mitoses, necrosis or hemorrhage was present. Immunohistochemical stains for CD117 (c-kit) (Figure 3B) and CD34 (Figure 3C) highlighted the tumor cells. The tumor morphology and immunophenotype were consistent with GIST. The cystic structures present at the periphery of the more dense tissue formed as the cyst grew and became edematous, forming cystic spaces [11]. GISTs represent less than 1% of all gastric neoplasms. These tumors arise in the wall of the stomach and rarely present as pedunculated extragastric lesions. Some GISTs may present as cystic lesions secondary to rapid tumor growth with congestion and intratumoral hemorrhage. In this case, a preoperative diagnosis of pancreatic malignancy was made. The diagnosis of GIST was made only after surgical excision with histopathologic examination of the tissue.

Using the current National Cancer Care Network guidelines for classification, gastric GISTs may be stratified for risk of malignancy based on tumor size and number of mitoses [11]. Although our patient’s tumor had a low mitotic rate, it was large in size. It is now known that GISTs can exhibit a variable biologic behavior and after a delay of several years, have the potential for malignant behavior and metastasis [12]. Therefore, even after complete surgical resection, the current consensus is to treat all GISTs as having the potential to behave in a malignant fashion. These tumors exhibit a gain of function in the c-KIT protooncogene and can be treated with tyrosine kinase inhibitors, such as Imatinib [13]. Imatinib therapy has been recommended for our patient and she will continue to receive close follow-up.

Gastric gastrointestinal stromal tumor is an uncommon primary mesenchymal tumor arising from the wall of the stomach. Rare tumors may present as pedunculated cysts and present difficulty in preoperative diagnosis. We present a case of one such tumor preoperatively diagnosed as a pancreatic malignancy. Pedunculated GIST should be considered in the differential diagnosis of a large cystic intra-abdominal mass arising from the pancreas. It is important to surgically excise and diagnose these lesions. Even smaller lesions appearing histologically bland with few mitoses may metastasize after an interval of several years. The consensus is that adjuvant therapy should be considered in the management of all patients with GISTs.

Copyright: © 2013 Pugh JL, et al. This is an open-access article distributed under the terms of the Creative Commons Attribution License, which permits unrestricted use, distribution, and reproduction in any medium, provided the original author and source are credited.