Copyright: © 2014 Nishimura N, et al. This is an open-access article distributed under the terms of the Creative Commons Attribution License, which permits unrestricted use, distribution, and reproduction in any medium, provided the original author and source are credited.

Background: Irsogladine maleate (IM) is a widely used antiulcer drug and protects the small bowel against nonsteroidal anti-inflammatory drug (NSAID)-induced injury in rats. However, the protective effect of IM against mucosal injury of the small intestine in humans has not been evaluated.

Methods: This is a prospective, randomized, crossover pilot study of IM versus placebo, administered with NSAIDs in healthy volunteers. IM or placebo plus loxoprofen was administered with omeprazole for 14 days, and for an additional 14-day period with the treatments reversed in the same subjects, with a 4-week washout period between treatment courses. Before and after each administration period, all subjects underwent fecal calprotectin monitoring as well as capsule endoscopy (CE) to observe the degree of mucosal injury of the small intestine.

Results: A total of 19 healthy volunteers (21–49 years) were evaluated. The mean number of red spots, reddened folds, and denuded areas per subject increased significantly (from 1.4±1.6 to 7.4±11.0, p<0.0001) in the placebo group, but not significantly in the IM group (from 1.3±1.4 to 2.9±3.0, p=0.059). Moreover, the mean number in the IM group at post-treatment was significantly less than that in the placebo group (p=0.038). However, the percentage of subjects with severe mucosal injuries including at least one mucosal break and/or ulcer after treatment was not significantly different between the placebo (47%) and IM (42%) groups.

Conclusions: NSAID-induced small-intestinal mucosal injuries including red spots, reddened folds and denuded areas were suppressed by IM, but the incidence of severe mucosal injuries was not significantly different.

Non steroidal anti-inflammatory drugs (NSAIDs) are used for the relief of pain and several inflammatory disorders, but their benefits are often offset by morbidity and mortality related to adverse gastrointestinal side effects. Until recently, the focus has been mainly on NSAID-induced upper gastrointestinal damage to assess the need for treatment and prevention using anti-acid secretory drugs such as proton pump inhibitors. However, these drugs are not effective for NSAID-induced small intestinal injuries [1,2]. Therefore, recent studies have evaluated mucosal protective drugs typically used for gastroduodenal ulcers. Irsogladine maleate (IM) is clinically used as an anti-ulcer drug in Japan, Korea and China to prevent gastric mucosal damage [3,4] and also protects the small intestinal mucosa against NSAID-induced damage in rats, suppressing inflammatory responses [5]. However, in humans, its protective effect in the small intestine has not been evaluated.

This study was undertaken to clarify the protective effect of IM against NSAID-induced mucosal injury of small intestine using CE and FC monitoring in subjects using a prospective, randomized, placebo-controlled, crossover study design.

Twenty-three healthy male volunteers (mean age, 31 years; age range, 21–49 years) were recruited. Subjects eligible for inclusion were over 20 years old, Helicobacter pylori negative, and had a history of lumbago, arthralgia, myalgia, headache, or neuralgia, and had been considering taking NSAIDs from that time. Exclusion criteria included taking any medication, including NSAIDs, for one month before entering the study; a history of GI disorders or prior GI surgery; known or suspected partial or complete stenosis of the small intestine; failure to access the full length of the small intestine by CE; or the presence of ulcers in the small intestine at the initial CE before the initial drugs were administered.

The study was approved by the ethics committee of Jichi Medical University in 2009 (ID: B09-09) and was conducted at Jichi Medical University between September 2009 and May 2010. The procedures were in accordance with the ethical standards of the Helsinki Declaration of 1975, as revised in 1983. All subjects provided written informed consent. This trial was registered at the UMIN Clinical Trials Registry as UMIN000002498 (http://www.umin.ac.jp/ctr/index-j.htm). 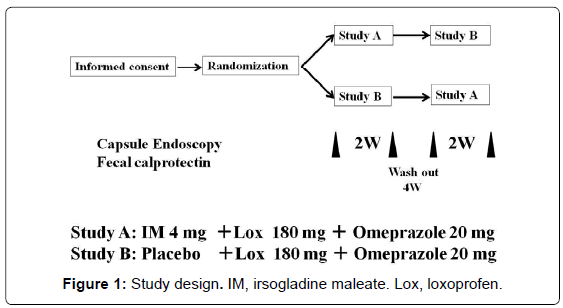 CE was performed with a PillCam SB2 capsule endoscope (Given Imaging Ltd., Israel). Subjects fasted for 12h before the procedure. Premedications such as laxatives or polyethylene glycol were not used because of the possibility that this would cleanse the bleeding sites. Then, subjects were allowed to drink clear liquids and eat a light meal 2 and 4h after capsule ingestion. Data were collected for up to 8h after capsule ingestion. The results were evaluated with RAPID 5 software (Given Imaging Ltd.). All CE examinations were assessed by an experienced reviewer (N. N.).

We attempted to evaluate the actual endoscopic findings that are suppressed by Irsogladine maleate rather than the extent of enteropathy. Therefore, the definition of endoscopic findings was modified from Maiden’s report [8] as follows. Petechiae/red spots were defined as demarcated, usually circular, areas of crimson mucosa with preservation of villi. Reddened folds were defined as one or more valvulae conniventes exhibiting discrete patchy or continuous erythema. Denuded areas were defined as areas with loss of villous architecture without a clear breach of the epithelium and may or not be associated with surrounding erythema. Mucosal breaks were defined as circumscribed areas of mucosal disruption, excluding ulcers. Ulcers were defined as mucosal breaks with exudates surrounded by a border of elevated mucosa (e.g. apparent depth) in the mucosa larger than the equivalent diameter of a valvulae conniventes.

Fecal calprotectin: A stool sample was obtained from each subject. The stool was frozen and stored at -20°C within 12h of receipt for subsequent biomarker determination. Samples were tested with an ELISA kit (Immundiagnostik, Bensheim, Germany) as previously described [14]. Calprotectin in the fecal extracts was analyzed in a blinded fashion and expressed in μg/g of feces.

Sample size was based on an estimation of the proportion of patients that would exhibit mucosal breaks at the post-treatment CE. The incidence of mucosal injuries was estimated at approximately 20% in the IM group, based on data from a preliminary study by Niwa et al., showing that the incidence of NSAID-induced small intestinal lesions was lower in patients on daily rebamipide medication (20%) compared to a placebo group (80%) [9]. Kamei et al. reported that the IM as well as rebamipide suppressed small intestinal lesions induced by indomethacin in rats [5]. In addition, the incidence of mucosal injuries was estimated at approximately 70% in the control group, because a recent study found small intestinal lesions in 50-80% in subjects on NSAID medication. Thus, 19 patients should be recruited in each arm of the study, for chi-square test, a significance level of 5% (two sided), a power of 90%, and equal allocation. Assuming that 20% of subjects would not be able to complete the study, we calculated that a minimum of 23 subjects would be required for this study.

The prevalence of small-intestinal ulcers, mucosal breaks, denuded areas, reddened folds, and petechiae/red spots were analyzed by chisquare test. The numbers of CE findings and concentration of FC are reported as mean and standard error. Student’s t test, paired and unpaired t test was used to analyze the effect of IM on the number of small-intestinal lesions and concentration of FC. The Pearson correlation was used to evaluate correlation. A p value of less than 0.05 is regarded as statistically significant for each test.

Twenty-three subjects were enrolled. Two subjects were excluded: the entire small intestine could not be observed in one subject, and a small-intestinal ulcer was found in another subject during the initial CE. Two subjects were withdrawn from the study because medication was needed to treat an influenza infection in one subject and a sprain in another subject. Following these exclusions, small intestinal injuries were analyzed in 19 subjects. All examinations were performed without complications.

As for the CE findings of small intestinal mucosal injuries, the rate of denuded areas and reddened folds in the IM group was significantly lower than those in the placebo group at post-treatment (p=0.048 and 0.027, respectively) (Table 1). However, the prevalence of subjects with at least one mucosal break and/or ulcer at post-treatment was similar (placebo 47% [9/19]; IM 42% [8/19]).

Table 2: Comparison of the mean number of mucosal injuries per subject between the placebo and the irsogladine maleate (IM) group at post-treatment.

Figure 2: Comparison of Fecal Calprotectin Level with Placebo and IM group at pre and post-treatment. Mean FC levels were significantly increased by treatment in both groups. However, the mean increase in FC before and after the administration of loxoprofen was similar in both groups. The vertical line shows the Fecal Calprotectin level by μg/g. The transverse line shows two groups at pre- and post-treatment stages.The mean ± SE is shown.

Loxoprofen, frequently used in Japan as a safe ‘prodrug’, is significantly associated with upper gastrointestinal bleeding [15]. In the present study, it also caused variable small-intestinal injuries at a high frequency in about 50% of the subjects. NSAIDs can cause a variety of abnormalities in the small intestine, such as ulceration, erosion, bleeding, and diaphragm-like stricture with high frequency [16,17]. A few investigators have used mucosal protective therapy for NSAID enteropathy, but their therapies have not been established yet [9-11].

IM prevents gastric mucosal damage and has a healing-promoting effect on gastric ulcers [3,4,18,19]. In a canine model, IM prevents NSAID-induced gastric damage by alleviating the reduction of gastric mucosal blood flow [20] and inhibiting the production of mucosal pro inflammatory cytokines and neutrophil infiltration [21]. IM also protects the small intestine against NSAID-induced injury in association with increased mucus secretion due to the inhibition of phosphodiesterase, resulting in the suppression of enterobacterial invasion and an increased expression of inducible nitric oxide synthesis in rats [5]. This evidence may explain the protective effect against small intestinal injuries including red spots, reddened folds and denuded areas induced by loxoprofen in patients. However, the IM dosage in the current study may not be sufficient to achieve complete suppression of mucosal injuries allowing mucosal breaks and ulcers occurring in some cases.IM prevents the NSAID-induced development of these lesions in rats in a dose-dependent manner [5].Thus, it is possible that these injuries could be prevented using increased doses. Further investigation is needed to confirm the usefulness of IM.

In this study, FC levels were measured in patients with various degrees of small intestinal injury. Interestingly, FC increased unrelated to the presence or absence of abnormal endoscopic findings in the small intestine induced by loxoprofen. FC levels may increase in relation to microscopic indices of NSAID enteropathy rather than macroscopic indices. Many studies have focused on the association between inflammatory bowel disease and FC [22]. FC levels in Crohn’s disease correlate closely with disease activity as determined by endoscopy [23]. However, the association between them has been confused with NSAID enteropathy. Tibble et al. reported that the measurement of FC levels was a simple non-invasive method for identifying patients with NSAID enteropathy [13]. Other investigators found no significant correlation between FC and CE findings [2,24]. In the present study, FC levels were not related to the severity of abnormal endoscopic findings of NSAID enteropathy. Indeed, subjects with normal endoscopic findings had the same increase in FC as those with mucosal breaks detected by CE. Moreover, FC levels varied in the IM group even after treatment, implying no association between FC levels and a preventive effect of IM.

There are several limitations to this study. First, the number of volunteers was small. Second, the duration of NSAID treatment was short.

We thank Prof. Alan Le for of the Department of Surgery at Jichi Medical University for language editing of the manuscript.