Copyright: © 2010 Sawant L, et al. This is an open-access article distributed under the terms of the Creative Commons Attribution License, which permits unrestricted use, distribution, and reproduction in any medium, provided the original author and source are credited.

Emblica (Phyllanthus emblica L.), an euphorbiaceous plant, is widely distributed in subtropical and tropical areas of India, China , Indonesia and Malay Peninsula and used in many traditional medicinal systems, such as Chinese herbal medicine, Tibetan medicine and Ayurvedic medicine [1]. It is a rich dietary source of vitamin C, minerals and amino acids and also contains a wide variety of phenolic compounds, such as tannins, phyllembelic acid, phyllemblin, rutin, curcuminoides and emblicol [2]. Earlier studies have demonstrated potent antimicrobial, antioxidant, anti-inflammatory, analgesic and antipyretic, adaptogenic, hepatoprotective, antitumor, antiulcerogenic and antidiarrheal activities in the fruits of Phyllanthus emblica [3-7]. Phyllanthus emblicafruits possess antimutagenic and anticarcinogenic properties owing to the combined presence of β-carotene, ascorbic acid and chlorophylin and have also been shown to modulate several biochemical events associated with tumor promotion such as alteration of protein kinase C (PKC) activity [8]. The fruits of Phyllanthus emblica are reported to contain hydrolysable tannins, emblicanin A and emblicanin B, along with pedunculagin and punigluconin [9].

There are various difference found in the composition of ascorbic acid in the fruits of Phyllanthus emblica may be due to different geographical location. Bhat et al studied the plant extract in the south coast of India. According to Bhat et al. the ascorbic acid was present below the quantifiable limits of HPLC-DAD (LOD ) 1 ppm and LOQ ) 3 ppm), also earlier Ghosal et al. questioned its presence in fruits in the north India [10]. Scartezzini studied plant extract in Italy, where he found ascorbic acid in large percentage. Scartezzini et al. proposed a reliable HPLC-DAD for the identification and quantification of ascorbic acid and further indicated that high antioxidant activity is due to a large percentage of the presence of ascorbic acid [11].

Keeping in view of their biological importance, a sensitive method for rapid estimation and separation of these markers has become a necessity for development and standardization of herbal drugs. HPLC is the method of choice for analysis of phenolic compounds, because of its extremely high versatility, precision and relatively low cost [12-14]. Reversed phase (RP) HPLC on a C18 column, with a binary mobile phase containing acidified water and a polar organic solvent (acetonitrile or methanol) with UV–visible diode-array detection (DAD), is usually preferred and is a crucial and reliable tool for routine analysis of plant phenolic compounds [15]. LC–MS is the most reliable method for identification and characterization of compounds. Efficient resolution is regarded as the prerequisite for a method developed for separation of multiple phenolic groups [16].

All those earlier reported methods describe analysis of ascorbic acid and gallic acid individually, but unfortunately there is no method which could determine both analytes simultaneously. So there is need to develop, validate and apply the method in real sample analysis.

Figure 1: The chemical structures of ascorbic acid (A) and gallic acid (B).

The fresh fruits of Phyllanthus emblica L. were collected from Junnar, Dist. Pune, India and was authenticated at Agharkar Research Institute Pune, India, with a voucher specimen (F-140) which were deposited in the herbarium.

Ascorbic and galllic acid (10 mg each) were weighed accurately and transferred to separate 100 mL volumetric flasks. Both standards were dissolved in 100 mL methanol to prepare standard stock solution of 100µg mL-1.

The fresh fruits of Phyllanthus emblica L. cut in to small pieces and seeds were removed. The fruit pieces were crushed to obtained juice. The juice was passed through a 60-mesh sieve and filtered juice was freeze-dried (Freezone 4.5, Labconco, USA) under high vacuum (133 × 104 mBar) at -40 ± 2°C to get dry powder. The accurately weighed freeze-dried (0.2 g) were transferred in 50 ml volumetric flask contains 30 ml extraction solvent (methanol–water (70:30, v/v) and sonicated for 20 min at 27±3°C in ultra sonicator water bath and diluted up to mark. The solution was filtered through a 0.45-µm membrane prior to injection into the HPLC and LC-MS/MS system.

HPLC–UV method: Separation for qualitative and quantitative analysis of the ascorbic acid and gallic acid were performed by HPLC– UV with a an Agilent 1100 Series HPLC system (Agilent,Waldbronn, Germany) with diode array detector (operated at 278 nm) and injection valve with 20-µL sample loop. Compounds were separated on a 4.6 mm × 250 mm, i.d., 5-µm pore size Zorbax SB RP-C18 column protected by a guard column containing the same packing. The mobile phase was a gradient prepared from 0.1% (v/v) acetic acid in HPLC-grade water (component A) and methanol (component B). Before use the components were filtered through 0.45-µm. A gradient was used as 0-15 min, 5% B; 15-40 min, 80% B; 40-42 min, 5% B; and 42-50 min, 5% B. The flow rate was 0.9 mL min-1. Data were integrated by Shimadzu class VP series software and results were obtained by comparison with standards. Results are mean values from three replicate analyses of the same sample. Samples and solutions were filtered through 0.45-µm Nylon filters (Millipore) before analysis by HPLC or mass spectrometry. Simple mobile phase was used as control for identification of blank peaks.

Construction of calibration plots: Solutions of both standards having different concentrations were prepared by dilution of the standard solutions. These solutions (20µL) were chromatographed and the peak areas were measured. Peak areas were then plotted against the respective concentrations for both ascorbic acid and gallic acid. From the plots it was found that the linear range for ascorbic acid was between 30 and 90 µg mL-1 whereas that for gallic acid was between 5 and 15 µg mL-1.

The method was validated for linearity, accuracy, precision, repeatability, selectivity and specificity. Accuracy was assessed by measuring recovery at three different levels, 80, 100 and 120% of the amount expected from analysis of the sample, in accordance with ICH guidelines. Precision assessed by measurement of intra and inter-day precision. In the intra-day study the concentrations of both drugs were calculated three times on the same day at intervals of 1 h. In the inter-day study the concentrations of the drugs were calculated on three different days. Selectivity and specificity of the method were assessed by injecting solutions containing both the standards; after chromatography two sharp peaks were obtained for both standards. LOD and LOQ were measured to evaluate the detection and quantitation limits of the method. They were calculated by use of the equations LOD = 3.3 σ/S and LOQ = 10 σ/S, where σ is the standard deviation of the response and S is the slope of the calibration plot.

Column chemistry, solvent type, solvent strength (volume fraction of organic solvent(s) in the mobile phase and pH of the buffer solution), detection wavelength and flow rate were varied to determine the chromatographic conditions giving the best separation. The mobile phase conditions were optimized so there was no interference from solvent and other compounds. 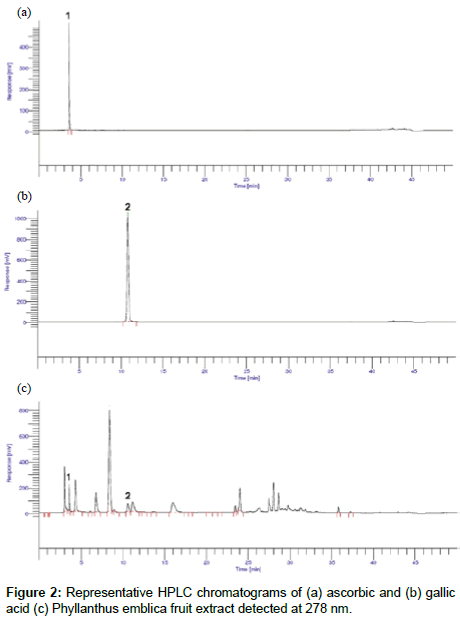 The method was validated for linearity, accuracy, precision, selectivity and specificity. All validation studies were performed by replicate injection of sample and standard solutions.

The linearity was determined separately for ascorbic and gallic acid. Solutions of the standards at seven different concentrations were analyzed and calibration curves were constructed by plotting mean areas against the respective concentrations. The method was evaluated by determination of the correlation coefficient and intercept values (Table 1). From the calibration plots it was clear that the linear range for ascorbic acid was between 5 and 40µg mL-1 whereas that for gallic acid was between 5 and 50µg mL-1.

The accuracy of the method was confirmed by conducting a recovery study at three different concentrations (80, 100 and 120% of the amount expected from analysis of the formulation) by replicate analysis (n = 7), in accordance with ICH guidelines. Standard solutions were added to a preanalysed sample solution and recovery of the drug was calculated. Results from the accuracy study are reported (Table 2).

From the recovery study it is clear that the method enables very accurate quantitative analysis of ascorbic and gallic acid in phyllanthus emblica, because all the statistical results were within the acceptable range, i.e. RSD < 2.0% and S.D. < 1.0.

The intra-day and inter-day precisions (expressed as the relative standard deviation (R.S.D.) for retention time and peak area were determined for ascorbic and gallic acid standards by repeated analysis (n = 7) (see Table 3).

Table 3: Recoveries of ascorbic and gallic acid in the Phyllanthus emblica (n=7).

The results obtained from (Table 3) show that intra-day and interday relative standard deviations for retention time and for peak area are both quite low and the precision is good.

The selectivity of the method for the standards was established by study of the resolution between the standards peaks. Under the proposed chromatographic conditions ascorbic acid and gallic acid were completely separated from each other This indicates the method is selective for simultaneous estimation. Specificity was assessed by comparing the chromatograms obtained from extract and from the standards shown in Figure 2. Because the retention times of both standard solutions and Phyllanthus emblica fruit extract were identical and no co-eluting peaks from the diluents were observed, the method was specific for quantitative estimation of both drugs in the commercial formulation.

Additionally, an LC-MS experiment was performed to confirm the identity of the peaks of interest Figure 3. The HPLC conditions were slightly changed as the separation had to be performed at room temperature and a flow rate of 0.9 ml /min did not allow a sensitive detection of the compounds. With modifications in the solvent composition and flow rate, the MS signals were readily assignable. In negative ESI mode, the spectra showed the signals at m/z of 174.98 for ascorbic acid and m/z of 168.98 for gallic acid in Figure 3. Further fragmentation showed the daughter ions 86.91 and 124.90 respectively for ascorbic and gallic acid as shown in Figure 4. 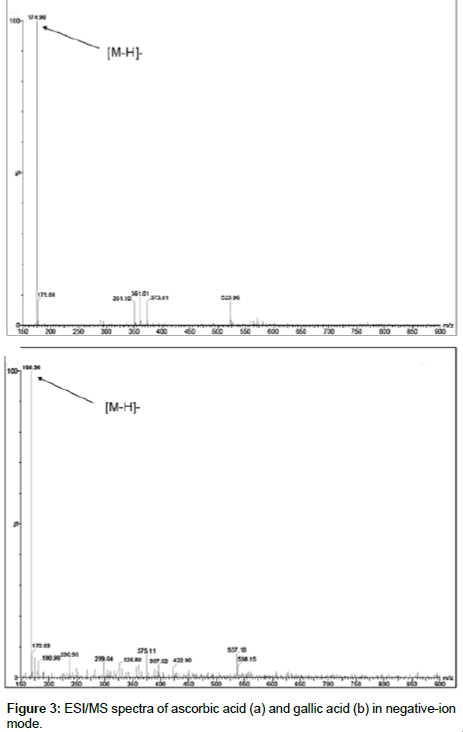 Figure 3: ESI/MS spectra of ascorbic acid (a) and gallic acid (b) in negative-ion mode. 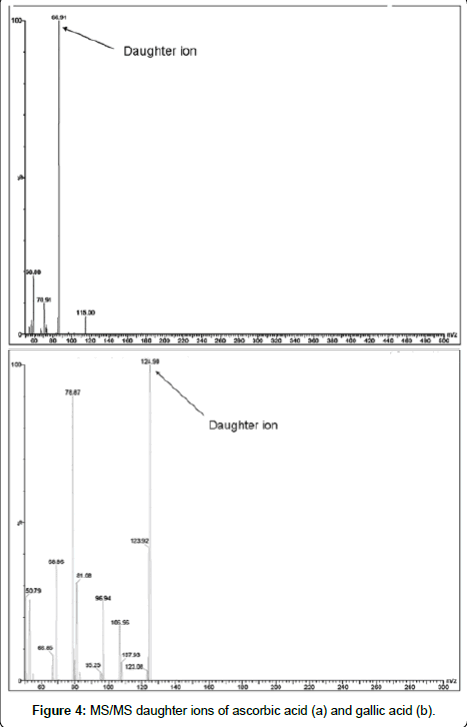 Figure 4: MS/MS daughter ions of ascorbic acid (a) and gallic acid (b).

The HPLC method mentioned here represented an excellent technique for simultaneous determination of ascorbic and gallic acid in the extract of Phyllanthus emblica, with good sensitivity, precision and reproducibility. The method gives a good resolution among ascorbic and gallic acid with a gradient elution (50 min). The method was also successfully applied to Phyllanthus emblica extracts and phenolic compounds were identified in the extract for the first time. It is possible to applied LC-MS/MS for identification and quantification. These compounds can be used as chemical markers for quality control and standardization of the single and multiple compound herbal formulations containing Phyllanthus emblica.

The authors are grateful to NMPB, Department of AYUSH, New Delhi for giving grant for research work, Dr Amit Agarwal for revving this article and to Dr. R. S. Gaud, Dean, SPTM, SVKM’s NMIMS for providing necessary facilities to carry out the research work.