Serological Assessment of Samples from Patients Complaining of ‘Dyspepsia’

Copyright: © 2013 Mortlock S. This is an open-access article distributed under the terms of the Creative Commons Attribution License, which permits unrestricted use, distribution, and reproduction in any medium, provided the original author and source are credited.

Background: Many people consult their GP for upper gastrointestinal (GI) symptoms, which are often associated with pain or burning and discomfort in the abdomen and range from heartburn and acid regurgitation to nausea and vomiting. Historically, all of these symptoms have been grouped together under the single term ‘dyspepsia’, defined as having one or more symptoms of epigastric pain, burning, postprandial fullness, or early satiation. While gastric or oesophageal cancer is an unusual finding in patients with dyspepsia, excluding malignancy is a common reason for performing endoscopy.

Methods: Quest Diagnostics has been offering the GastroPanel® assays for those patients who have been referred to the walk-in clinic complaining of ‘dyspepsia’. This is a set of three assays (Pepsinogen I, Gastrin 17 and Helicobacter pylori) and the results use an algorithm which can provide information about the stomach health and about the function of the stomach mucosa.

Results: Of all the samples tested 63.5% showed no abnormalities and were reported as ‘normal function of gastric mucosa.’ These patients would be classed as having functional dyspepsia. Thirty-six samples (19.9%) were positive for Helicobacter pylori and the remaining samples had a variety of abnormal results.

Conclusion: Dyspepsia is a common problem seen both by primary care physicians and gastroenterologists. Using the results from the serological analysis of the patients’ serum the clinician can delineate between gastric atrophy and a normal health stomach usually without the need to refer the patient for endoscopy.

To evaluate the utility of a serological panel combining pepsinogen I, gastrin-17, and anti-Helicobacter pylori antibodies (Gastropanel®) as a screening method for patients attending a walk in clinic complaining of dyspepsia.

Many people consult their GP for upper gastrointestinal (GI) symptoms, which are often associated with pain or burning and discomfort in the abdomen and range from heartburn and acid regurgitation to nausea and vomiting [1-3]. The symptoms can cause problems with a person’s physical and social activities and are generally related to the consumption of food and drink. Historically, all of these symptoms have been grouped together under the single term ‘dyspepsia’ or poor digestion [4,5]. Dyspepsia is defined as having one or more symptoms of epigastric pain, burning, postprandial fullness, or early satiation [6].

One common cause of serious stomach complaints is infection with Helicobacter pylori (H. pylori) which can be acquired at a young age and colonize the stomach mucosa permanently in the absence of treatment [7,8]. In nearly half of the H. pylori infected cases gastritis develops over the years into atrophic gastritis (loss of glands and function of the stomach mucosa), which is most common in people aged over 50 years (Figure 1). 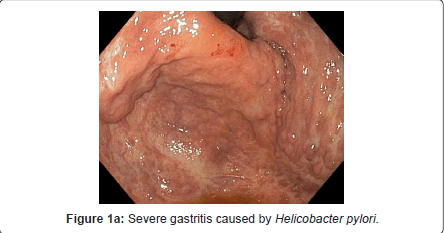 Figure 1b: Atrophic gastritis in the gastric fundus.

H. pylori infection and atrophic gastritis often cause no symptoms. Atrophic gastritis (AG) may be present in the upper stomach (corpus), in the lower stomach (antrum), or both (Figure 2). Corpus AG is linked with an increased risk of gastric cancer and of the deficiencies of vitamin B12, iron and calcium, all associated with low acidity (hypochlorhydria) caused by corpus AG. Antrum AG is connected with an increased risk of gastric cancer and peptic ulcer diseases. The risk for gastric cancer increases up to 90-fold, if severe or moderate atrophy exists in both antrum and corpus [9-11]. Normally, if these patients had a long history of symptoms they might require empirical treatment, endoscopy, testing for Helicobacter pylori or a combination of these approaches [12-14]. 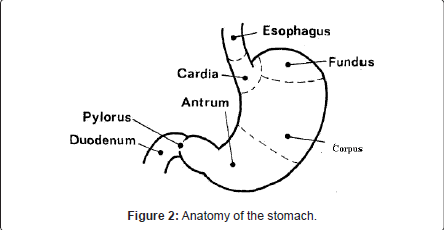 Figure 2: Anatomy of the stomach.

Quest Diagnostics (UK) has been offering the GastroPanel® assays from Biohit Oyj (Laippatie 1, 08800, Helsinki, Finland) for those patients who have been referred to the walk-in clinic at the Upper Wimpole Street Laboratory complaining of ‘dyspepsia’.

The commercial kit GastroPanel® served to determine serological levels of PGI, G17 and H. pylori IgG antibodies. Specific enzyme immnuno assays (EIAs) were performed on micro well plates according to instructions of the manufacturer for the measurement of the absorbance after a peroxidation reaction at 450 nm. Appropriate external controls, were run with each sample tested in accordance with the primary validation which had been completed prior to setting up the study. All of the assays were validating using the Quest Diagnostics standard validation method, which includes intra and inter assay precision, limit of detection, and patient correlation. Every three months the quality control co-ordinator at Biohit Oyj would send 5 proficiency samples for blind testing at the Heston facility [15].

The results were analysed by the computer model Gastrosoft® and the reports produced were based on clinical studies comparing the results of GastroPanel® examinations with results from gastroscopy and biopsy examinations. The results use an algorithm which can provide information about the stomach health and about the function of the stomach mucosa (Figure 3). Figure 3: Evaluation of a dyspeptic patient using the GastroPanel® assay.

The patients were attendees at a walk-in clinic who had been referred from their clinicians. Based on Rome III criteria, participants were defined as having dyspepsia when they had one or more of symptoms, such as postprandial fullness, early satiation, or epigastric pain or burning for at least 6 months prior to attending the clinic. They had to be non-smokers and had not eaten any spicy foods for at least 24 hours prior to the blood being drawn.

Basal blood was drawn into EDTA tubes from each selected patient and was instantly centrifuged at 2000 g for 15 minutes for plasma collection. Plasma samples were then distributed into cryovials and stored at -20°C until they sent to the testing laboratory.

In order to assess the effectiveness of the GastroPanel® test, Quest Diagnostics laboratory at Heston UK, evaluated 181 patients (age range 19-75 years, median 41 years). Of these 105 (60.7%) could be characterized as Japanese (including 23 couples [husband and wife]), 53 (30.6%) as European and the remainder 15 (8.7%) an assortment of nationalities, and eight (4.4%) were of unknown nationality.

Of the 181 samples tested, 115 (63.5%) showed no abnormalities in the samples and were reported as ‘normal function of gastric mucosa.’ Thirty-six samples (19.9%) were positive for Helicobacter pylori only and a report was issued with a recommendation to return to their GP and start an appropriate course of antibiotics to eradicate the infection. The remaining 30 samples had a variety of abnormal results (Table 1) and a report was issued with an appropriate comment and a recommendation to seek further advice from a gastroenterologist.

There were only 27 (14.9%) patients over 50 years of age, and of these 18 were reported as normal, four were positive for H. pylori only, four showed increased Pepsinogen I levels and the final sample was positive for both (51 years old Japanese woman) H. pylori and Pepsinogen I.

When GastroPanel® examination gives a normal result for a healthy stomach mucosa, those patients suffering with stomach problems usually have “functional dyspepsia”, or disease outside the stomach, e.g. in the colon, and can be directed to other type of testing and treatment. About half the World’s population carries Helicobacter pylori (H. pylori) in their stomach mucosa, and approximately half of these people will develop atrophic gastritis in their lifetime [16]. In atrophic gastritis, the cells and glands of stomach mucosa are destroyed, which causes serious structural and functional damage, and increases the risk of many stomach related diseases. Atrophic gastritis, which is most commonly asymptomatic, can progress into gastric cancer in a few percent of the sufferers. Even though the incidence of gastric cancer is on the decline, it is still relatively common in the older population as the average lifetime increases.

The ability to differentiate between patients with healthy or diseased stomach mucosa is useful in the diagnosis of atrophic gastritis. Currently there are two options; the first is gastroscopy and microscopic examination of endoscopic biopsy from the gastric antrum and corpus. More recently there have been advances in the use of a less invasive option, the examination of gastric markers from serum or plasma [17-20]. A recent study concluded that use of the biomarkers of the modern GastroPanel® test for safe and cost-efficient primary diagnosis and screening of Helicobacter pylori infection and atrophic gastritis in patients with stomach discomfort and in asymptomatic patients, as it is neither safe nor cost-efficient to use the 13C urea breath test for this purpose. In addition, the authors of the publication state that acetaldehyde generated in an achlorhydric stomach (a consequence of atrophic gastritis) is a significant reason for an increased gastric and oesophageal cancer risk. Acetium capsules can reduce the amount of cancer-causing acetaldehyde generated in the stomach -and thus, very likely, they also reduce the cancer risk [21].

If the GastroPanel® examination gives a normal result, the diagnosis is either functional dyspepsia or another disease not involving the gastric mucosa. The examination diagnoses H. pylori infection, atrophic gastritis, and its location (corpus, antrum, or both). GastroSoft interpretation software shows the test results, reference ranges, and diagnosis, and when necessary gives recommendation on possible treatment or further testing. The GastroSoft report also indicates if there is an increased risk of gastroesophageal reflux disease. Unfortunately, this study was only a snapshot with no confirmatory evidence of histopathology for the results and no follow-up with the patients. It would, therefore be difficult to verify if the results were genuine or not. In this instance, however, the majority of patients (64%) had normal results, indicating the presence of a normal stomach mucosa. This group would be less likely to benefit from gastroscopy to detect gastric cancer. Clearly, identifying such patients before gastroscopy, using a non-invasive test such as the GastroPanel®, could help to reduce unnecessary invasive procedures, prevent discomfort for the patient, and decrease healthcare costs.

The authors would like to thank Marjo Nikulin and Graham Johnson (bioHit Oyj, Finland) for providing advice and the use of the algorithm. Thanks to Clare Arnold-Maclean (QC Specialist) for the monitoring and help in interpreting the EQA returns. Finally, thank you to all of the staff in the Immunology and Molecular Biology Department at Quest Diagnostics.