Copyright: © 2010 Sakurada T, et al. This is an open-access article distributed under the terms of the Creative Commons Attribution License, which permits unrestricted use, distribution, and reproduction in any medium, provided the original author and source are credited.

Morphine and oxycodone are widely used as analgesic drugs for cancer pain. Frequently, morphine and oxycodone are given alternately to avoid adverse drug reactions. Morphine is metabolized primarily into two glucuronide metabolites, morphine-3-glucuronide and morphine-6-glucuronide to be pharmacologically active. Morphine-3-glucuronide and morphine-6-glucuronide have neuroexcitatory action and analgesic activity, respectively. Oxymorphone, a metabolite of oxycodone, has an analgesic effect, however it is so small that it can be neglected when considering oxycodone. The pharmacological effects of these drugs and also their metabolites have been reported in experimental papers, but in humans, the relationships between these plasma concentrations and the clinical effects remain unclear. Also the necessity for simultaneous determination of both drugs has been suggested because opioid rotation is performed clinically. However, to date there is no study which has simultaneously determined these four drugs, and also achieved a high recovery. In this paper, in order to perform a reliable pharmacokinetic study of cancer pain patients receiving morphine and oxycodone, an easy, rapid, sensitive and selective analytical method was proposed and validated.

Morphine (MOR) and oxycodone (OXY) are the only oral strong opioid preparations currently available in Japan. The 3-step analgesic ladder recommended by the World Health Organization has been widely used in cancer pain management [1-3], and guidelines based on these steps have also been recommended for the treatment of non-cancer pain [4,5]. MOR and OXY are on the third step of the analgesic ladder. However, since there is small specification of 5mg in Japan, OXY is used from second step of the analgesic ladder. MOR is metabolized primarily to two glucuronide metabolites, morphine- 3-glucuronide (M3G) and morphine-6-glucuronide (M6G) to be pharmacologically active [6,7]. M3G and M6G have neuroexcitatory action and analgesic activity, respectively; MOR administration contributes to the analgesic effect however adverse drug reactions have been reported [8-11]. Therefore, in patients administered MOR, it is of concern to assess these metabolites as well as the plasma concentration of MOR.

On the other hand, oxymorphone, a metabolite of OXY has an analgesic effect, but it is produced in such a small amount it can be neglected when we considering OXY [12]. OXY is reported to have an analgesic potency 1.5 fold that of morphine after oral administration for chronic cancer related pain [13]. Additionally, it has high oral bioavailability (60-87%) [14,15] in humans and fewer adverse effects (hallucinations, pruritus, vomiting) [16,17]. Also, an opioid rotation is often carried out between MOR and OXY in clinic. Opioid rotation is a method of pain management in which one strong opioid analgesic is switched to another in the treatment of chronic pain when side effects (e.g. nausea, vomiting, drowsiness and constipation) are uncontrollable and/or pain relief is inadequate despite dose titration, or for other reasons including cognitive failure, delirium, myoclonus, local toxicity, severe sedation [18-21]. Therefore, in order to perform a reliable pharmacokinetic study of cancer pain patients receiving MOR and OXY a simultaneous determination method was necessary.

Several methods of analysis have been reported for MOR, M3G, M6G and OXY. These methods include high-performance liquid chromatography (HPLC) combined with electrochemical, ultraviolet or fluorescence detection [22-26]. More analysis methods with gas chromatography and liquid chromatography coupled to mass spectrometric detection have been developed [27,28]. However, these methods are intended for MOR or OXY solely, MOR and its active metabolite, and they do not determine the four drugs simultaneously. Recently, a method employing HPLC combined with electro spray ionization-tandem mass spectrometry for low level quantitation of MOR, M3G, M6G and OXY has been described [29]. The novel methods are exceptionally robust and sensitive, however access to the necessary instrumentation is often limited and they commonly include derivatization, multiple extraction steps, solvent evaporation and expensive equipment.

The most common analytical techniques currently used are HPLC with UV detectors. For the analysis of MOR, M3G, M6G and OXY the published reports focus on HPLC with UV detection [23,25], however, it’s not simultaneous determination and often short concentration intervals are used. Here, we describe an analytical method based on HPLC which enables simultaneous determination of these four plasma concentrations, and it satisfies the range of assay concentration to treat clinical samples.

The HPLC system consisted of Shimadzu (Kyoto, Japan) equipment (LC-10AD pump, SIL-10A DVP autosampler, SCL-10A system controller and a SPD-10A UV detector) and a CTO-10AC column thermostat (Kyoto Chromato, Kyoto, Japan). The UV detector wavelength was set at 210 nm. The separation was performed on a CAPCELL PAK SCX UG 80 (Shiseido, 5 μm, 2.0 mm i.d.× 150 mm), and a CAPCELL PAK SCX UG 80 precolumn (Shiseido, 5 μm, 2.0 mm i.d.× 35 mm), using a mixture of potassium dihydrogen phosphate buffer (pH 3.0; 50 mM) and acetonitrile (40: 60, v/v) at a flow rate of 0.2 mL/min and at a column temperature of 40°C. The mobile phase was filtered through 0.45 μm pore size membranes (Millipore) and degassed in an ultrasonic bath. A volume of ten microliters was injected into the HPLC column.

The CV served as a measure of precision. According to another report, the CV should be less than 15%, except at the lower limit of quantification where it should not exceed 20% [30].

The accuracy of the assay was determined on the above samples, by comparing the means of the measured MOR, M3G, M6G and OXY concentrations with the specified concentrations either in standard samples (intra-day accuracy) or in QC samples (inter-day accuracy). The percentage deviation of the mean from true values, expressed as relative error (RE) served as a measure of accuracy. The mean value of RE should be within ±15% of the nominal value, except at the lower limit of quantification where it should not exceed 20% [30].

The absolute recovery of each drug was determined by extracting standard solutions of the drugs which added to drug-free human plasma by the proposed method, the peak heights obtained were compared to those obtained after direct injection of non-extracted standard solutions, at the same concentrations.

A solid-phase extraction cartridge (Oasis HLB, Waters Co., Milford, MA) was used for solid-phase extraction. Cartridges were preconditioned by flushing with 1mL of acetonitrile and 1 mL of distilled water. Plasma samples and calibration standards of 0.95mL were added to the internal standard solution (naloxone 0.4 mg/mL) of 50 μL. After precipitation of plasma proteins with 0.7 N perchloric acid, the supernatant of 1 mL was passed through the column and then washed with 0.5 mL of water and were eluted with an elution solvent (acetonitrile : water = 2 : 1 ) of 1 mL and 10 μL were injected into the HPLC system.

Sample preparation for this study included a modification of the extraction methods proposed for the separation of MOR from plasma by other authors [31] including a single step extraction in solid-phase. A reversed-phase solid-phase extraction cartridge (Oasis® HLB, Waters Co., Milford, MA) was used for solid-phase extraction. The material used in this kind of column is a copolymer designed to have a hydrophilic-lipophilic balance that gives high and reproducible recoveries for acidic, basic and neutral compounds, even if the cartridge runs dry. Good sensitivity and short retention times were obtained with this HPLC system. The proposed method enables the simultaneous quantification of MOR, M3G, M6G and OXY in a human plasma sample on the same HPLC run. Retention times for MOR, M3G, M6G, OXY and IS were 21.0, 12.4, 10.6, 17.1 and 14.1min, respectively, and the total run time of analysis was 25min. MOR, M3G, M6G, OXY and IS gave well resolved, sharp peaks. Endogenous compounds interfering with retention times of the compounds or that of the IS could not be seen in the chromatograms and the chromatographic background after extraction was clean. A typical chromatogram after extraction from plasma is shown in Figure 1. Separations with a CAPCELL PAK SCX UG 80 column 5μm, 150mm×2.0mm ( Shiseido Co., Tokyo) gave good resolution of the compounds. In order to protect the column and improve its lifetime, a guard column packed with the same material was used. Adopting these precautions, the analytical column was maintained in a good condition for around 500 times injections. The number of injected samples the column was capable of resolving satisfactorily before accuracy and precision was compromised to an extent requiring replacement of the column. 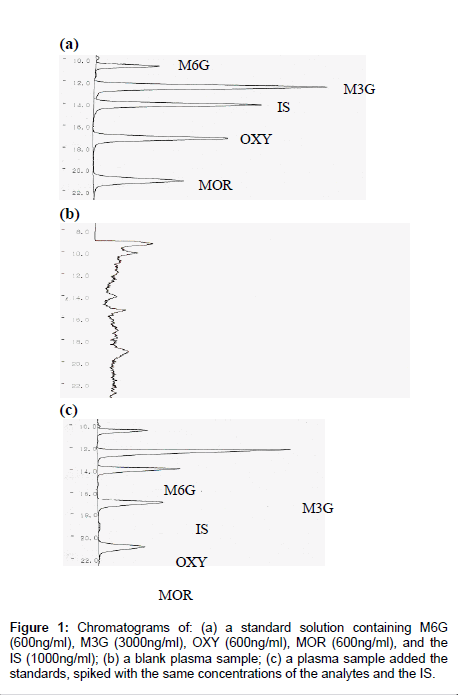 Precision and accuracy: Table 1 and 2 provide the results obtained for intra-assay and inter-assay precision and accuracy calculations for all analytes. The intra- and inter-precision and accuracy of the method were determined using QC samples at five different concentration levels and at three different concentration levels, respectively. Five replicate determinations were made at each concentration level. The intra- and inter-precision were in the ranges of 1.7-14.9% and 1.2- 17.2%, respectively, while the intra- and inter-accuracy were 1.1-16.1% and 0.1-18.5%, respectively. The variation between the calculated values for standards and the theoretical concentrations were well within the acceptance criterion of <15% for RE and CV, except for the OXY concentration of 10ng/mL. The CV and RE in inter-precision of OXY (10ng/mL) was 17.2% and 18.5, but this satisfied the lower limit of the quantification where it should not exceed 20%. The recovery rate indicated more than 90% except for M3G (intra precision 200ng/ mL; 88.6%), and it was confirmed again that the repeatability was good (Table 3). This high performance chromatographic method with a simultaneous UV detection has been developed for the quantitative determination of MOR, its active metabolites and OXY in human plasma. Many published papers describe the need for multiple extraction procedures and complex chromatographic systems to ensure reproducibility and resolution, but there are few reports which describe the simultaneous measurement of MOR, M3G, M6G and OXY. An extremely sensitive method for the detection of MOR, M3G, M6G and OXY in human plasma using LC-ESI-MS/MS was described by Musshoff F et al. [29]. The determination range of MOR, M6G and OXY was suitable for some clinical specimens. However, because there were many clinical specimens with more than 1000ng/mL of M3G [32], the determination range (10-1000ng/ml) for M3G was not sufficient. Furthermore, its recovery rate was low with 40.5-69.2%. Our method enabled simultaneous measurement of an adapted range of concentration for the clinical specimen at a high recovery rate.

Table 1: Intra-day precision and accuracy for analysis of MOR, M3G, M6G and OXY in human plasma.

Table 2: Inter-day precision and accuracy for analysis of MOR, M3G, M6G and OXY in human plasma.

In conclusion, a relatively simple HPLC method for the simultaneous determination of MOR, its active metabolites and OXY in human plasma is characterized by high sensitivity and appropriate validation parameters, allowing for routine monitoring of opioid therapy including therapy employing opioid rotation. Furthermore, it can be applied in many clinical laboratories because it uses standard apparatus and has the advantages of speed, as well as economy, as only one cartridge is used per extraction. The main advantage of this method is the ability to analyze four compounds simultaneously under similar conditions, thereby saving time and expenses for sample preparation.