Multiple Lymphomatous Polyposis (MLP) is characterized by multiple polyps with lymphoma invasion involving long segments of the Gastrointestinal (GI) tract. [1] Most MLP are thought to represent Mantle Cell Lymphoma (MCL) of the GI tract. However, some follicular lymphomas, [2,3] mucosa-associated lymphoid tissue lymphomas, [3,4] and adult T-cell lymphomas [5] have been found to show a multiple polypoid appearance throughout long segments of the GI tract. We report a case with MLP associated with Small Lymphocytic Lymphoma (SLL). SLL in extranodal sites is difficult to diagnose and the clinical course is different from that of MCL. MCL has a more aggressive clinical course than Chronic Lymphocytic Leukemia or SLL (CLL/SLL). A median survival time of CLL/SLL is 7 to 10 years, [6] while patients with MCL have a median survival of 3 years [7].

A 45-year-old man presented with a 6 × 12 cm left axillary mass. Needle biopsy of the axillary mass was performed and revealed malignant lymphoma. He was then referred for further investigation to our hospital. He denied weight loss, fever, or night sweats. Lymphocyte counts in peripheral blood were 2.5 × 10^9/L and atypical lymphocyte was 12%. Serological tests showed no evidence of EBV reactivation, and anti-HTLV1-antibody was negative. Computed tomography scans demonstrated lymphoadenopathy in the right axilla, mediastium, and paraaorta, but hepatosplenomegary was not found. Bone marrow aspiration showed atypical lymphocyte infiltration. Colonoscopy was performed to evaluate diarrhea, and multiple polyposis was detected throughout the colon (Figure 1). Five different colonic lesions were biopsied. Moreover, axillary lymph node was biopsied, since the first biopsy was too small due to the needle biopsy. After diagnosis of SLL, the patient received CHOP therapy and achieved partial remission. Four years after the first diagnosis, the patient had diarrhea and lymphadenopathy again. Colonoscopy revealed lymphoma relapse, which was confirmed by the biopsy. Fludarabine plus cyclophosphamide therapy was performed with the recovery of the patient. He was alive at the time of this report, 12 years after the initial diagnosis. 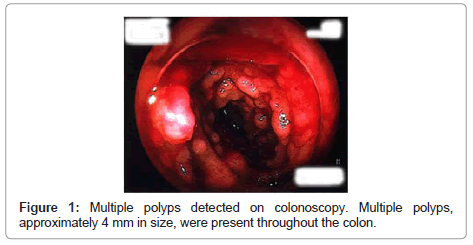 Histopathology of Colon and Lymph Node

All colonic biopsies showed a dense, atypical mononuclear small lymphocyte infiltration that populated the lamina propria with normal glands (Figures 2A and 2B). In the lymph node, small to medium lymphocytes proliferated to form pseudofollicules (Figures 2C and 2D). Figure 2: Histopathology of colon and lymph node biopsy specimens. A dense, atypical mononuclear small lymphocyte infiltration was demonstrated in the colon (A and B) and in the left axillary lymph node (C and D). Note the pseudofollicular pattern in C. Figure 3: Immunohistochemistry of lymph node biopsy. Infiltrating lymphocytes are positive for CD5 (A), CD20 (B), and CD23 (C), but negative for Cyclin D1 (D).

To further confirm that both lesions were derived from the identical clone, molecular analysis was performed. DNA was extracted from the formalin-fixed, paraffin-embedded colonic and lymph node specimens. The semi-nested Polymerase Chain Reaction (PCR) was performed [8-12] for the immunoglobulin heavy chain Variable Region (VH) using consensus primers spanning the recombined VH to JH segment. PCR was initially performed with sense primer (VHFR1c: AGGTGCAGCTG(C/G)(A/T)G(C/G)AGTC(A/T/G)GG) and antisense primer (VH-LJH: TGAGGAGACGGTGACC). The second PCR was performed with sense primer (VH-FR1c) and antisense primer (VH-VLJH: GTGACCAGGGT(A/C/G/T)CTTTGGCCCCAG). The resulting products were directly sequenced in both directions with primers VH-FR1c and VH-VLJH. The detected nucleotide sequence was aligned with the closest germline sequence derived from the NCBI database. The molecular analyses demonstrated clonal IgH gene rearrangements in both colonic and lymph node specimens. The two sequences were identical and the alignments between this case and germline V gene (VH3-23) were as follows: FWR1 (79/89, 88.8%), CDR1 (12/15, 80%), FWR2 (40/42, 95.2%), CDR2 (42/51, 82.4%), FWR3 (84/94, 89.4%), and total (257/291, 88.3%) (Figure 4). 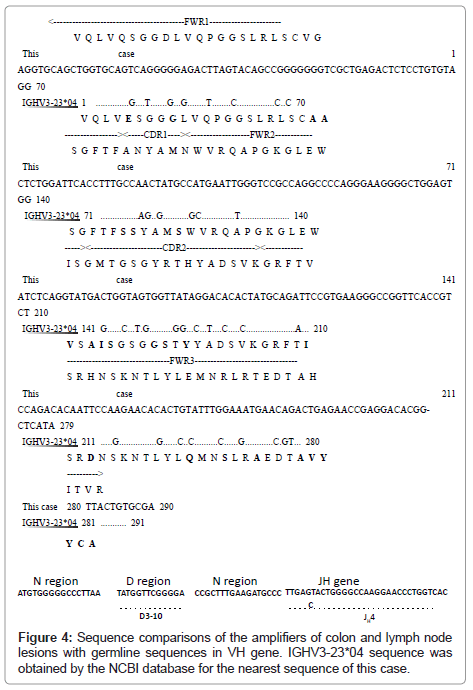 Figure 4: Sequence comparisons of the amplifiers of colon and lymph node lesions with germline sequences in VH gene. IGHV3-23*04 sequence was obtained by the NCBI database for the nearest sequence of this case.

MLP is a very rare presentation of CLL/SLL, and most MLP cases have MCLs. To our knowledge, there has been only one case report in the English literature, [13] but the number of polyps was limited compared to that in the present case. The patient in that report showed three polyps in the rectum by colonoscopy. These lesions were diagnosed as CLL, which diffusely infiltrated to the bone marrow. On the other hand, in the current case there were multiple polyps, and its presentation showed far more similarities with MLP in MCL. GI tract involvement is common in MCL, and according to Romaguera et al. [14], 88% of MCL patients were revealed to have GI invasion histologically. MCL is an aggressive lymphoma, which usually has a poor prognosis.These clinical features are in contrast to those of CLL/SLL, which has a better clinical course. Therefore, it is important to discriminate CLL/SLL from MCL, especially when the clinical symptoms and signs appear to be similar, such as in this MLP case. Furthermore, it remains difficult to rule out the possibility of cyclinD1-negative MCL. Although cyclinD1 is believed as a hallmark of MCL, 5% of the cases with morphological features of MCL lack expression of cyclinD1. In the present case, we diagnosed as CLL/SLL, rather than cyclinD1-negative MCL, on the basis of the CD23 positivity and morphological pattern of the lymph node. Moreover, we exclude very rare composite lymphoma(cyclinD1-negative MCLin the colon and CLL/SLL in the lymph node) by the molecular analysis.

The diagnosis of CLL/SLL was confirmed in the present case by the lymph node biopsy specimen, showing the morphology and immunohistochemistry typical of SLL. Further molecular analysis demonstrated the identical sequences of the immunoglobulin heavy chain gene, confirming the identical clone in both lesions. In the two MCL case reports by Medicott et al. [15], the patients had CLL presenting as MLP-like lesions of the appendix and colonic diverticula, respectively. Molecular analysis enabled us to exclude such a rare possibility in our present case.

MLP is a very rare presentation of CLL/SLL. Although it has major similarities with MCL, based on morphology and immunohistochemistry, it is very important to discriminate these lymphomas from each other as they have different prognoses. Molecular analysis provides further concrete information facilitating the correct diagnosis and subtyping of MLP.

Copyright: © 2012 Ota Y, et al. This is an open-access article distributed under the terms of the Creative Commons Attribution License, which permits unrestricted use, distribution, and reproduction in any medium, provided the original author and source are credited.