The Epidemiology of Cancers of Stomach and Esophagus in China

Copyright: © 2013 nong Zou X, et al. This is an open-access article distributed under the terms of the Creative Commons Attribution License, which permits unrestricted use, distribution, and reproduction in any medium, provided the original author and source are credited.

Stomach cancer and esophageal cancer are among the most common and lethal cancers worldwide, causing 934 000 and 380 000 deaths each year respectively and a substantial amount of deaths occurs in less-developed countries [1]. Similarly, they cause high burden in China in terms of incidence and mortality. According to the latest data of Chinese cancer registry, esophageal cancer is the fifth of the 10 most common cancers and stomach cancer is the second, and with respect to mortality, they rank the forth and third of 10 leading cancers respectively [2]. Progress has been achieved in the field of prevention, diagnosis, and treatment of esophageal cancer and stomach cancer, and also obvious variations have been revealed in cancer patterns during the last few decades.

According to the study on cancer death survey in Chinese population covering the population of 850 million during 1973 and 1975, cancers of stomach and esophagus were the top two causes of cancer death in China accounting for 23.03% and 21.80% of all caner caused deaths. The age-standardized mortality rate by world population (ASMR) were 23.86/105, a high level in the world and 23.40/105, the highest level in the world, respectively [3]. The geographic distribution revealed exceptional high-risk areas of stomach cancer like Changle and Linqu, esophageal cancer like Linzhou and Cixian, which attract the attention of scholars and researchers all over the world.

Two decades late, stomach cancer in China still remained first cause of cancer death whereas esophageal cancer dropped to the forth, indicated by the second national retrospective sampling death survey in 1990-1992. With the ASMR of 29.34/105 and 27.73/105, these cancers accounted for 21.3% and 15.4% of all cancer caused deaths, respectively [4]. In 2004-2005, the ASMRs of stomach cancer and esophageal cancer declined to 22.14/105 and 13.73/105, respectively, while male mortalities were approximately twice those of female, and rural areas showed a higher level than urban areas [5]. On the other hand, the mortality of lung cancer displayed a significant increase as the first cause of the whole population and so did both male and female.

Over all, the ASMRs of both stomach cancer and esophageal cancer decreased in recent 30 years, and more dramatic changes could be found in the later, (Table 1). Moreover, the females experienced a more remarkable trend of decreasing than the males, and urban areas dropped much more rapidly compared with rural areas. But still, both showed higher levels than the world average when the mortality of cancers from all sites in China was approaching that of developed countries [1,5].

Table 1: Mortality rates of stomach cancer and esophageal cancer in China from 1973 to 2005.

There were some common risk factors found for cancers of esophagus and stomach in China, including the low consumption of fresh vegetables and fruits resulted to deficiency of micro-nutrients, cigarette smoking, heavy alcohol drinking, high consumption of preserved or salted food, and the low social economic status [6-11]. However, the mortalities of those two cancers did not well correlate geographically, suggested specific factors contributed to the differences [3]. Differences between proteomic of Helicobacter pylori were found in patients with gastritis and gastric cancer in areas of high and low risk areas [12]. A series precancerous lesions or stages of those two malignant diseases were found, in the residents of Linxian, such as mild, moderate and severe dysplasia of the esophagus, and atrophic gastritis, low-grade and high-grade dysplasia of the stomach. National programs of cancer screening have been developed and implemented in the population at high risk areas [13].

Changes occurred during the fast development of the socialeconomics in China, not only the mortality of cancer in Chinese population at national level, but in the locals. Report from Nutrition Intervention in Linxian showed reduction of total mortality, total cancer mortality and stomach mortality by 9%, 13% and 21% in the supplementation with multi-micronutrients of β-carotene, selenium, α-tocopherol compared with the controls [6]. Avoiding having mould food (particularly corns, wheat, peanuts) or food contaminated by nitrosamines such pickled vegetables, shrimp paste, could contribute to reduced the mortality of stomach cancer in Linxian, Changle, and the areas where had similar problems.

Consistently decreases in ASMR of stomach cancer, as shown in Figure 1, could be observed in Changle and Linzhou, where were found with high risks for stomach cancer in 1973-1975. Although the explanations for those declines were not quite clearly finalized, we could not exclude the health effects due to the increased capacities to against the cancer development, improvement of the living environment by providing healthy environment, increasing food supplies, and improving nutritional status. Though we did not have enough data to evaluate the effect on survivals from implementing screening program, the observation on the long term trends of the mortalities provided evidence for cancer prevention. 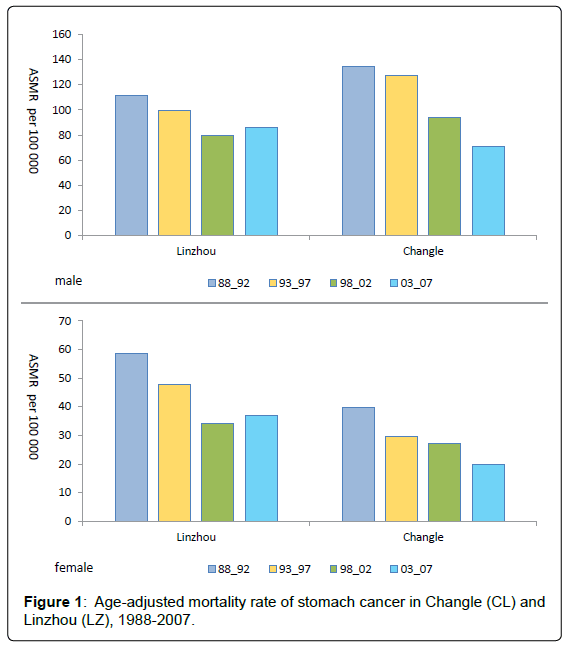 Since 1980s, Linzhou in Henan province has been recognized as the typical high-risk areas of cancers of the esophagus and stomach. In the last three decades, nutrition intervention, screening and surveillance have been conducting among high-risk population. In the light of this remarkable trend and findings of relevant research, it can be concluded that the common cancers in China are preventable, detectable, treatable, curable diseases. In order to prevent cancer at the early stage, people should be advised to balance dietary structure, elevate nutritional status and avoid exposure to carcinogenic agents. With respect to health management, strategies should be developed for early detection and diagnosis, and improvement is urgently in need in primary healthcare system. While incidence and mortality of the cancers of the lung cancer, bladder, and pancreas in China were increasing, the smokingfree policies should be strongly enforced in all public areas and working places in order to control these preventable diseases.