Copyright: © 2011 Gashi Z, et al. This is an open-access article distributed under the terms of the Creative Commons Attribution License, which permits unrestricted use, distribution, and reproduction in any medium, provided the original author and source are credited.

Barrett’s esophagus (BE) is a condition in which the normal squamous epithelium of the esophagus is replaced with metaplastic intestinal-type epithelium. Many factors that appear to be risk factors for the presence of BE include obesity, the presence of hiatal hernia, and interestingly, the absence of Helicobacter pylori infection. The diagnosis of Barrett’s esophagus is made by endoscopy and confirmed by histology The aim of this study was to determine the histological correlation with clinical end endoscopical appearance in this patients with BE. Methods: 58 patients with endoscopically diagnosed and histopathologically verified BE were included in this prospective study. We analysed predictive factors such as: age, sex, obesity, alcohol consumption and smoking, reflux symptom duration in this patients, prevalence of short and long segment of BE, and the presence of hiatal hernia. After endoscopic examination of these patients, the presence of BE was verified with histopathological examination to determine the correlation between the endoscope diagnosis and histopathologic outcome in patients with BE. Results: Among 58 subjects, 35 (60%) were males and 23 (40%) were females, with mean age of 50.4 ±3.28 years. Obesity was present in 32/58 patients (55.2%). 39 patients from 58 patients were smokers (67.2%). Symptom duration in these patients was approximately 8.9±1.90 years. From total number of patients, 35 were with short segment (60.3%), the rest (23 patients) were with long segment of Barrett’s esophagus (39.7%). Hiatal hernia was present in 64% of patients, 40 of 58 patients diagnosed with Barrett’s esophagus (69%) also had hiatal hernia, of which 32/40 (80%) were with LSBE, and 8/40 patients (20%) were with SSBE. Conclusions: The important risk factors for appearance of BE in GERD patients were male sex, middle age, obesity, hiatal hernia, smoking and alcohol consumption. The prevalence of infection with H. Pylori in patients with BE was lower and this may predict a protective role of this microorganism. Diagnostic accuracy of Barrett’s esophagus is significantly greater in patients with LSBE than in those with SSBE (94.3% vs 43.5%) and p <0.05).

Barrett’s metaplasia results from chronic exposure of the distal esophagus to gastric acid. Barrett’s esophagus (BE) is defined as an alteration in the esophageal mucosa, from normal squamous epithelium to columnar epithelium with intestinal metaplasia [1]. Gastroesophageal reflux disease (GERD) is accepted as the primary etiologic factor for BE. There is compelling evidence that BE is a precursor lesion for adenocarcinoma of the esophagus [2]. BE is found in about 2% of the adult population, and in 3-5% of persons with GERD [3,4]. Many factors that appear to be risk factors for the presence of BE include: obesity, the presence of hiatal hernia, and interestingly, the absence of Helicobacter pylori infection [5,6]. The assumption is that all of these factors contribute to BE by increasing the risk and severity of acid reflux. Many gastroenterologistis belive that the diagnosis of BE is made by endoscopy and confirmed by histology. Specifically, the presence of pink gastric appearing mucosa above the proximal folds of a hiatal hernia defines the presences of BE. In fact, the likelihood of finding specialized intestinal metaplasia (IM), the histologic marker of this disease, in the endoscopically defined Barret’s esophagus appears to be directly related to the extent of the columnar lining [7-9]. The aim of this study was to determine predictive factors of developing BE and to determine the histological correlation with clinical end endoscopical appearance in our patients with GERD.

In this retrospective chart study we analyzed data from the database of 58 patients at the Endoscopic Service of Internal Clinic, University Clinical Center of Kosova in Prishtina. All patients diagnosed with Barrett s esophagus in the period from January 2008 until December 2010 were included in the study.

The demographic and clinical data of all patients with BE, suchas: age, gender, obesity, smoking, alcohol consumption, duration of reflux symptoms (pyrosis, regurgitation and vomiting) were taken into account. All patients underwent upper GI endoscopy. During the endoscopic examination it was determined if the patient had Barrett’s esophagus, which was diagnosed based on histopathologic findings of specialized intestinal metaplasia in endoscopic biopsies. The positions of endoscopic landmarks were determined in centimeters from the teeth, with documentation of the level of esophagitis and the squamocolumnar junction, the length of columnar-lined lower esophageal mucosa and the upper limit of gastric folds. The extent of BE was defined as the distance from the gastro-esophageal junction to the location of the highest point of the squamocolumnar junction. The presence of hiatal hernia was marked if present and measured at the same time. Biopsy specimens were taken by method of “four quadrant biopsy” every 2 cm starting at the top of the rugal folds. Biopsy specimen were fixed with 10% buffered formalin and embedded in paraffin wax. Serial sections were then cut and stained with haematoxylin-eosin by the pathologist in Institute of Pathology - UCC of Prishtina, whereas alcian blue, Giemsa and imunohistochemistry stains were prepared in the UCC of Skopje.

The gastroesophageal junction was defined by endoscopic examination as the point at which the tubular esophagus ended and the gastric rugal folds began. A columnar-lined esophagus was identified when the squamocolumnar junction (SCJ) or any part of its circumference extended above the gastroesophageal junction. Patients with an irregular SCJ had biopsy samples obtained from glandular mucosal tongues extending into the esophagus. A biopsy specimen from antrum was also taken in order to determine the eventual presence of H. pylori infection.

In this study were included patients with endoscopically and histopathologically verified diagnosis of BE, aged from 18-80 years old, both males and females. Exclusion criteria included: columnar mucosa in the distal esophagus but no intestinal metaplasia on biopsy and patients with BE who have undergone endoscopic ablation therapy or were enrolled in chemoprevention trials.

We collected the data and analyzed them statistically, using the Chi-test (χ2-test). All tests for p<0.05 and p<0.001 were considered significant. The results were presented through respective figures.

Table 1: The endoscopic distribution of BE in our patients. 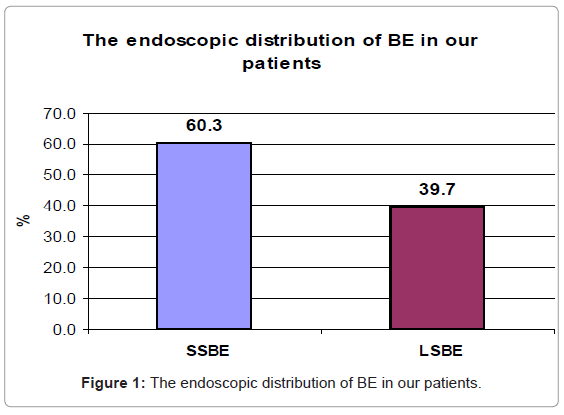 Figure 1: The endoscopic distribution of BE in our patients.

Table 2: Presence of hiatal hernia in our BE patients. 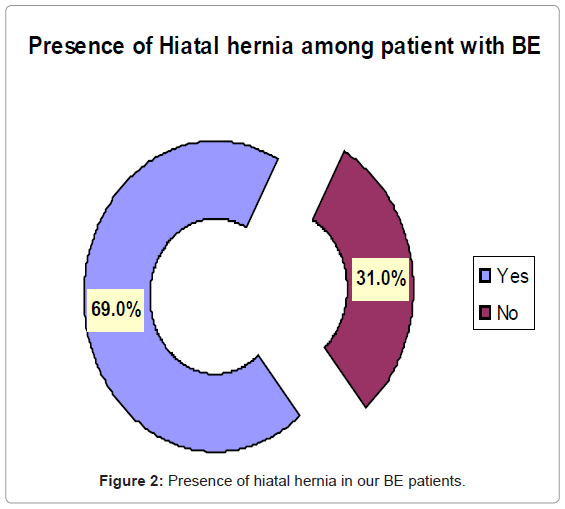 Figure 2: Presence of hiatal hernia in our BE patients.

Table 3: Presence of hiatal hernia in our BE patients after typus of BE. 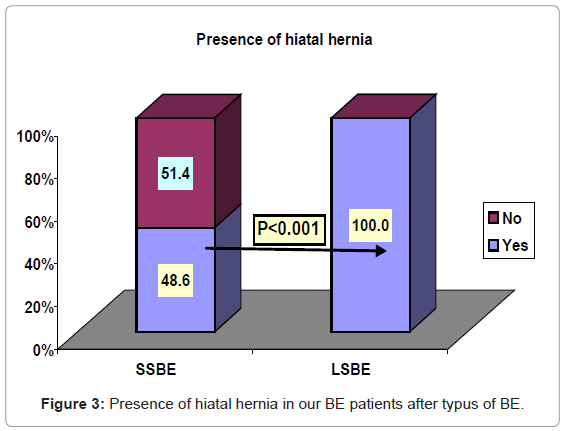 Figure 3: Presence of hiatal hernia in our BE patients after typus of BE.

Sixteen (45.7%) out of 35 patients with SSBE had histologically confirmed intestinal metaplasia, whereas 21 (91.3%) out of 23 patients with LSBE had histologically confirmed intestinal metaplasia, which demonstrated statistical significance (χ2=10.59; df=1; p<0.01) (Table 4 and Figure 4).

Table 4: Presence of intestinal metaplasia in cases with endoscopic diagnosed BE. 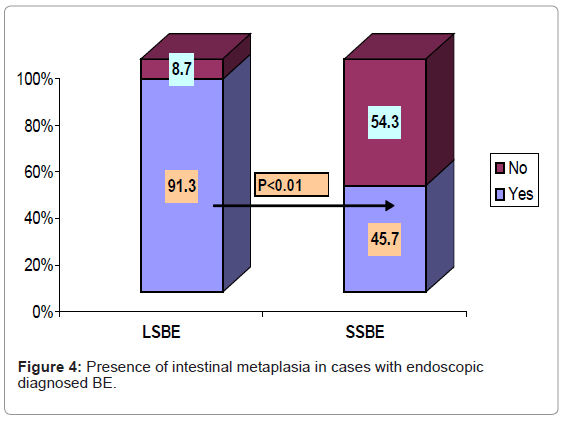 Figure 4: Presence of intestinal metaplasia in cases with endoscopic diagnosed BE.

The development of Barrett’s esophagus is a consequence of long standing gastroesophageal reflux disease. Barrett’s epithelium due to its specific histological features apparently can be expected to be more resistant to aggressive acidic stomach contents [10].

The diagnosis of BE is always needed to be histologically confirmed in order to enable better monitoring of these patients according to the degree of alterations in their esophageal mucosa [11,12].

The results of our study show that male patients were represented significantly higher in the total number of patients with BE compared to female patients (p<0.05). The most represented age-group with BE was 50-59 years. Smoking was present in 67.2% and alcohol consumption in 39.6%, which demonstrates that these habits were common among these patients. These results, as well as the duration of symptoms of BE, were very similar with the results from the recent literature [6,7]. While Ronkainen et al. [4] and Kim et al. [5] have found that alcohol consumption and smoking are significant risk factors, others have shown no significant importance of alcohol consumption and smoking in patients with BE [9,12,13].

Hiatal hernia distorts the anatomy that normally protects against reflux by reducing pressure at the lower esophageal sphincter, creating an acidic hernia sac between the diaphragm and the esophagus, and decreasing the efficacy of peristalsis [14]. In regard of hiatal hernia, it was significantly more present in patients with long segment of BE, than in those with short segment of BE. A recent study, similar to our study, showed that of 50 patients with GERD who developed BE, 63% had the finding of hiatal hernia [15]. Another study demonstrated that longer length of hiatal hernia correlated with longer segment of BE [16].

GERD, BE and esophageal adenocarcinoma have all been associated with the presence of obesity. The relationship between GERD and obesity is thought to be in part due to increased gastroesophageal sphincter gradient [17], intra-abdominal pressure [18], and increased incidence of hiatal hernia in obese patients [19]. This is also confirmed by our results where obesity was present in 55.2% of our patients. A recent retrospective case-control study showed a strong direct relationship between mean visceral adipose tissue and BE when comparing patients with and without BE who had undergone both endoscopy and an abdominal CT scan at a large Veterans Hospital [20]. A similar correlation between body mass index and BE was found in another study, with an adjusted odds ratio of 1.35 for each five-point increase in BMI [21]

Helicobacter pylori, in contrast to obesity and hiatal hernia, may affect the risk of BE by physiologic rather than anatomic means. Helicobacter pylori may affect the lower risk of BE because it can decrease gastric acidity through activity of urease [22]. The fact that H. pylori may be protective against BE is a contrast to its well established status as a risk factor for peptic ulcer disease (PUD) and gastritis, and indeed eradication of H. pylori for PUD. Results of our study showed lower prevalence of H. pylori infection among patients with BE (15.5%) compared to GERD patients (38%) and controls (48%). The data from the literature have also shown a low prevalence of H. pylori infection among these patients. In a similar study of 251 patients undergoing endoscopy, cagA+ H. pylori was present in 44% of 25 controls, 36% of 36 patients with GERD, 20% of 10 patients with SSBE, and 0% of 18 patients with LSBE [23]. The delimitation of our study was the absence of method for determining cagA+ strains of H. pylori.

Spechler et al. [11] first noted that the frequency of finding specialized intestinal metaplasia in biopsy specimens obtained at the squamocolumnar junction increased from 15% for patients with no columnar lining visible in the esophagus to 90% for patients with greater than 3cm of esophageal columnar epithelium.

These studies demonstrate that the endoscopic diagnosis of LSBE is usually confirmed in over 75% of cases, while the correct diagnosis of SSBE by endoscopy is obtained in approximately one-third of cases. Therefore, histology rather than endoscopy is the gold standard for making the diagnosis of Barrett’s esophagus.

Referring to the results of our study, we came to these conclusions:

1. Male gender, age-group of 50-59 years, smoking and alcohol consumption are important predictive factors in developing BE among patients with GERD.

2. Obesity is also an important factor in developing BE, as long as it was significantly represented.

4. The low prevalence of H. pylori infection in patients with BE suggests the possibility of protective role of this microorganism.