Copyright: © 2012 Behnam B, et al. This is an open-access article distributed under the terms of the Creative Commons Attribution License, which permits unrestricted use, distribution, and reproduction in any medium, provided the original author and source are credited.

Objectives:
Gabapentin seems to be a safe and well tolerated medication for treating cocaine dependence. This study examined the efficacy of gabapentin for withdrawal-related pain relief due to crack (the Iranian crack containing condensed heroin) use.
Methods:
Sixty subjects were recruited from either an inpatient psychiatric ward of Fatemieh hospital in semnan and randomized to either placebo (n=30) or gabapentin (1800 mg/day) (n=30) for 7 days, balanced for gender. Subjective Opioid Withdrawal Scale was measured as a self-administered scale for grading body pain at baseline, and days 1, 2, 3, 4, 5, 6, and 7.
Results:
Mean of pain score had a significant decreasing trend in both gabapentin and placebo groups. Pain severity during the first six days of detoxification was significantly lower in gabapentin group compared with the controls, while the severity of pain based on SOWS scale was measured similar in the two groups at seventh day of trial.
Conclusion:
We could confirm the effective role of gabapentin in removing Iranian crack-related withdrawal pain. However, this potential effect on pain removing was only observed in first six days of drug administration.

Gabapentin is a pharmaceutical drug, specifically a GABA analogue that was originally widely developed for the treatment of epilepsy, pain relief, especially neuropathic pain [1,2]. Results with human and rat brain NMR spectroscopy indicate that gabapentin increases GABA synthesis, probably by modulating, as it does in vitro, the action of the GABA synthetic enzyme, glutamic acid decarboxylase and the glutamate synthesizing enzyme, branched-chain amino acid transaminase [3]. Gabapentin is one of the most common medications used in the expensive treatment protocol for alcohol and substances addiction. It has been suggested that gabapentin alone in doses of 1500 mg at bedtime taken for 40–60 days has been effective in reducing cravings or desire to use Alcohol [4,5]. It also attenuates the severity of withdrawal symptoms experienced by those physically dependent on opioid analgesics, such as heroin, morphine, and methadone [6]. Some studies also demonstrated a significant reduction in the severity of cocaine withdrawal syndrome [7-9].

Dependence to crack, the chemical cocaine hydrochloride, is one of society’s greatest problems today. It has penetrated all levels of each society and even no area of the developed countries is crack-free. Not only, the chances of overdosing and poisoning leading to coma, convulsions, and death are greatly increased, psychologically, the drug reduces concentration, ambition, drive, and increases confusion and irritability, wreaking havoc on users’ professional and personal lives [10]. Although used crack in western countries potentially includes cocaine, but consumed crack in Iran (named Iranian crack) contains condensed heroin.

Sixty subjects, including ten women, were recruited from an inpatient psychiatric ward of Fatemieh hospital after reviewing medical records. Subjects 18 years and older were eligible if they met DSM-IV criteria according to the American Psychiatric Association guideline for current substance dependence as well as based on psychiatrist diagnosis. All patients had the history of regular crack usage at least within the last year. Patients with major psychological disorders, acute physical disorders, or brain organic disease were excluded from the study. Women were eligible only if they were not nursing or tested negative for pregnancy. Blood tests to rule out medical illness included electrolytes, blood sugar, thyroid stimulating hormone, renal function tests, and liver function tests. The study protocol and recruitment procedures were approved by the Review Board of the Semnan University of Medical Sciences. Consent was obtained from all subjects and written informed consent for the full protocol was obtained.

Qualified subjects were randomized to either placebo (n=30) or gabapentin (n=30) for 7 days, balanced for gender. The randomization schedule was generated by a statistician and implemented by a blinded research pharmacist. Study investigators, raters, and subjects were also blinded to treatment assignment until all study visits were completed and the data set was cleaned and locked. Subjects were assessed at baseline, and days 1, 2, 3, 4, 5, 6, and 7.

During the double-blind phase, study medication was titrated to thirty capsules of either gabapentin or placebo orally 45 minutes prior to bedtime over a 7-day period as tolerated. Each capsule received by the active medication group contained 300 mg of gabapentin for a final target dose of 1800 mg prior to bedtime. Subjects received one capsule at bedtime for three nights, then two capsules for four nights. On day 7, subjects were reassessed by the study physician. Gabapentin and placebo capsules were identical in appearance and dispensed from visit to visit.

Subjective Opioid Withdrawal Scale (SOWS) scale was measured as a self-administered scale for grading opioid withdrawal symptoms. It contains 16 symptoms whose intensity the patient rates on a scale of 0 (not at all) to 4 (extremely). Among all components, we used the item of body pain for assessing the severity of pain in the Gabapentin and placebo group [11].

Data are expressed as mean ± standard deviation (SD) for quantitative variables and were summarized by absolute frequencies and percentages for categorical variables. Continuous variables were compared using t test or non-parametric Mann-Whitney U test whenever the data did not appear to have normal distribution or when the assumption of equal variances was violated across the groups. Categorical variables across the two groups were compared using the Chi-square test or Fisher’s exact test if required. We considered 2-tailed P values ≤ 0.05 to be statistically significant. Analyses were performed using SPSS statistical software (version 16.0) for windows.

In current study, 30 subjects (aged 26.5 ± 5.1 years) were treated with gabapentin and 30 subjects (aged 27.6 ± 7.5 years) were administered placebo. No significant baseline differences across the two groups were observed on age, measures of used Iranian crack, as well as duration of crack using (Table 1). As shown in Figure 1, mean of pain score had a significant decreasing trend in both gabapentin and placebo groups. Pain severity during the first six days of detoxification was significantly lower in gabapentin group compared with the controls, while the severity of pain based on SOWS scale was measured similar in the two groups at seventh day of trial (Table 2). 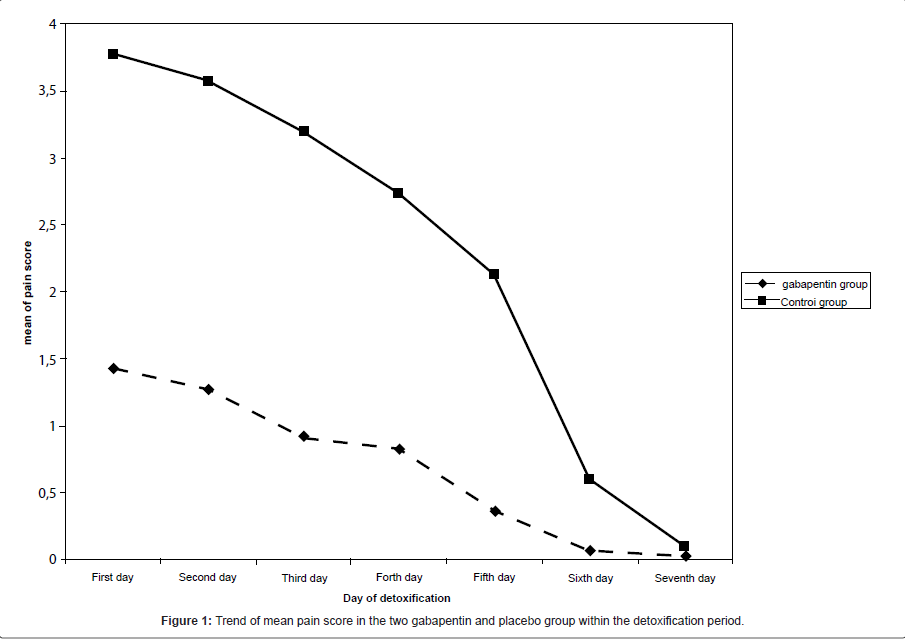 Figure 1: Trend of mean pain score in the two gabapentin and placebo group within the detoxification period.

Table 2: Severity of pain based on SOWS scale in gabapentin and placebo group.

Several controlled clinical trials in various diseases subgroups showed that gabapentin at 2400-3600 mg/day has an efficacy for inhibiting neuropathic pain syndromes, including cancer pain syndromes, pain associated with HIV infection, chronic back pain and others [12,13]. Gabapentin as a GABA analogue can also provide new avenues for pharmacological treatment of substances dependence. This drug is an antiepileptics shown to be effective in the treatment of pain disorders and appears to be useful for several psychiatric disorders as well as alcohol withdrawal and cocaine dependence. It has been indicated that gabapentin, at a dose of 600 mg three times a day, appear to lead a reduction in symptomatic medication and an overall beneficial effect on symptoms of drugs withdrawal. Among these substances, exposure to crack can result in experience painful and life threatening withdrawal, irritability, poor ability to regulate body temperature and increased risk of having seizures. Therefore, it seems that administration of gabapentin with appropriate dosages can effectively inhibit adverse events of drug misuse. In the present study, we could confirm the effective role of gabapentin in removing Iranian crack-related withdrawal pain. We also showed that the potential effect of this drug on pain removing could be observed in first six days of administration and this effect was reduced immediately after this time period. Similarly, Myrick et al. showed a decreasing amount and frequency of cocaine craving following administration of gabapentin [9]. Also, in a study by Foltin et al., the highest dose of gabapentin tested (1200 mg/day) decreased the discriminative stimulus effects of cocaine and decreased cocaine craving by 41–53% following cocaine administration [14]. Resent findings support that gabapentin as prescribed for the treatment of neuropathic pain, is effective in decreasing opioid-induced pain hyperalgesia [15]. Furthermore, there are some evidences to show that gabapentin is effective in neuropathic pain, whereas other authors could not demonstrate the role of gabapentin for pain relief. Bisaga et al in a study on individuals with cocaine dependence observed that gabapentin 1600 mg bid was no more effective than placebo in the treatment of cocaine dependence [16]. Available evidences mainly focused on the gabapentin effectiveness for relieving acute pain [17], and its beneficial influence on chronic pain conditions was not proved in most of them.

Because of the different reports regarding effects of gabapentin for pain relief as well as reducing cravings with the different dosages, the beneficial effects of this drug seems to be dependant to the duration and daily order of gabapentin. In our survey, the effect of gabapentin to reduce withdrawal-related pain due to Iranian crack use was only observed within the first six days of administration. Hence, for improving efficiency of this drug, programmed changes of drug administration with respect to daily dosage and duration of drug administration should be considered and assessed in further studies.

In conclusion, our study confirms the effective role of gabapentin in removing Iranian crack-related withdrawal pain. However, this potential effect on pain removing was only observed in first six days of drug administration.

This study was supported by the Semnan University of Medical Sciences. We thank the University authorities who offered critical administrative support and managerial services in carrying out the study and also all researchers for their help and support.