Copyright: © 2013 Shield KD, et al. This is an open-access article distributed under the terms of the Creative Commons Attribution License, which permits unrestricted use, distribution, and reproduction in any medium, provided the original author and source are credited.

Methods: Alcohol-attributable deaths and the effects of increasing the coverage rate for alcohol dependence treatment were estimated for France in 2004 using alcohol-attributable fractions and simulations. Data on alcohol dependence, alcohol consumption and mortality were obtained from the Gender, alcohol and culture: an international study, the Global Information System on Alcohol and Health, and the 2004 Global Burden of Disease study respectively.

The tradition of consuming alcohol has long been a part of European culture, especially in France. Each region of France has a unique pattern of drinking which is associated with geographical location. Many regions of France, especially in the south, follow a traditional Mediterranean drinking style, with daily drinking, often with meals, and wine as the traditional beverage of choice [1]. The northern regions exhibit drinking patterns which more closely resemble those of other neighboring high-income European Union (EU) countries, such as the United Kingdom, the Netherlands and Germany [1]. These patterns of drinking feature proportionally a higher consumption of beer and spirits; however, for all regions of France wine is the most consumed alcoholic beverage [2,3]. Binge drinking behaviours are generally in frequent, but recent increases have been observed, especially among adolescents [4,5].

Alcohol is an essential cause in over 200, three-digit International Classification of Diseases (10th revision) codes [6,7] for an overview of the diseases that are causally linked with alcohol consumption. Alcohol consumption was the third leading risk factor for premature death and disability globally in 2004, responsible for 3.8% of all mortality or 2,300,000 deaths [8].

One of the most severe health consequences of alcohol consumption is Alcohol Dependence (AD), which is a maladaptive pattern of consumption, characterized by a loss of control, leading to clinically significant impairment or distress. AD also results in a higher chance of alcohol-attributable diseases (such as liver cirrhosis) and severe social problems (e.g., loss of productivity, divorce), as well as potential societal costs. As is the case in all European countries, AD is largely undertreated in France. From 2001 to 2003, it was estimated that in France, less than 10% of all people with AD receive treatment [9]. Thus, improving coverage rates of AD treatment may potentially be an effective way of reducing the alcohol-attributable burden of disease.

The 2005 pattern of drinking score for France (a composite measure assessing at the population level the manner in which individuals consume alcohol [14,15] was obtained from the 2005 Global Burden of Disease (GBD) study.

To calculate the alcohol-attributable burden of disease, we utilized Alcohol-Attributable Fractions (AAFs), where an AAF is defined as the percentage of morality that would not occur if everyone was a lifetime abstainer. For diseases and conditions that are entirely attributable to alcohol consumption (i.e. where alcohol is a necessary cause in the development of the disease or condition, such as AD), the AAF is equal to 1. For alcohol-related diseases, conditions and injuries where alcohol is not a necessary cause, we calculated the AAFs by combining exposure indicators and Relative Risk (RR) functions Rehm et al. [1] for a discussion of the AAF calculation methodology for total alcohol consumption, heavy alcohol consumption and AD, and for the RR functions for each disease modeled.

Modelling the effects of treatment for Alcohol Dependence

For our simulation model, we generated 100,000 data points or “drinkers” to represent the drinking population of France. The data points that were identified as drinkers with AD were selected randomly among the heavy drinkers (men who consume 72 grams or more of pure alcohol per day and women who consume 48 grams or more of pure alcohol per day), with the total number of data points selected being equal to the number of people in France with AD among every 100,000 drinkers. As the effect of treatment interventions can be translated into a shift in average alcohol consumption or as a decrease in the RR of mortality, the effects of interventions were calculated using AAFs. The AAFs were evaluated before and after interventions and the differences between the estimates were used to calculate the deaths prevented for each given increase in treatment coverage. Sensitivity analyses were performed using AD prevalence estimates data from Lepine et al. [30] (these estimates are from the European Study of the Epidemiology of Mental Disorders survey (part of the World Mental Health Survey), but are unadjusted for under coverage of AD as described above).

Data on the number of deaths by cause for 2004 were obtained from the 2004 GBD Study [31]. The data from the 2004 GBD study was the latest year for mortality data (estimated using a consistent methodology) to which the authors had access.

Data on population estimates for France and other European countries for 2005 were obtained from the 2005 GBD study [32]. 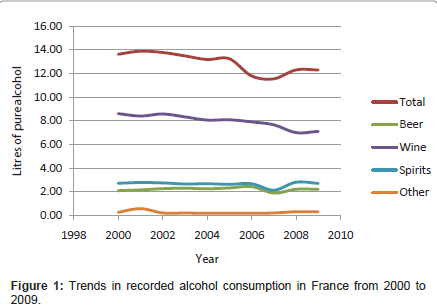 Figure 1:Trends in recorded alcohol consumption in France from 2000 to 2009.

France’s pattern of drinking score is currently 1 (the least detrimental level), indicating generally healthy drinking habits, such as relatively little drinking to intoxication and drinking with meals. In 2004, 7% of drinkers consume more than 5 drinks on any occasion several times a week, 13% do so once a week, and 15% do so once a month. These percentages are below the EU average.

In France in 2004, 15,300 deaths (3,000 female deaths; 12,300 male deaths) or 13.6% of all deaths (8.7% of all female deaths; 15.8% of all male deaths) of people 15 to 64 years of age were attributable to alcohol consumption. This corresponds to approximately 1 in 12 women and 1 in 6 men dying prematurely due to alcohol. The rate of alcohol-attributable mortality for France in 2004 was 15.1 per 100,000 women and 61.8 per 100,000 men, in each case for people aged 15 to 64 years. This mortality rate places France 13th among the 30 investigated European countries (the EU countries, Iceland, Norway and Switzerland). This ranking system is constructed such that the top ranked country experiences the most alcohol-attributable harms adjusted for population size and population structure. Figure 2a presents the proportion of alcohol-attributable deaths to all deaths for women 15 to 64 years of age for the European countries examined, and Figure 2b presents this same information for men 15 to 64 years of age. 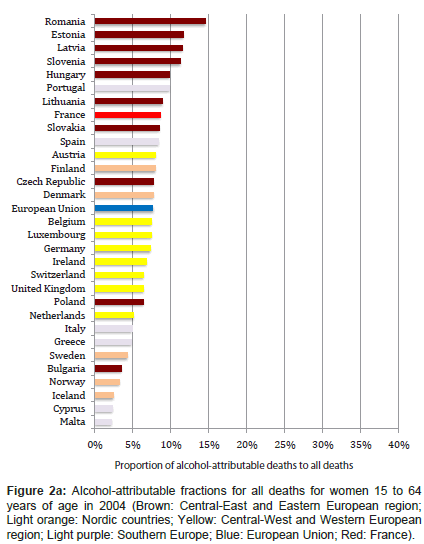 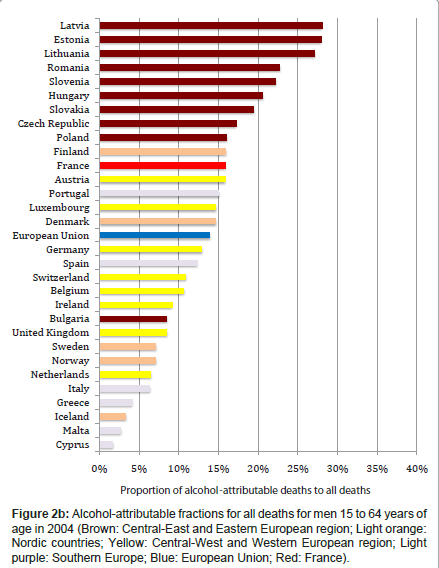 In France in 2004 alcohol consumption was responsible for approximately 15,300 deaths (3,000 deaths of women (1 in 12 deaths) and 12,300 deaths of men (1 in 6 deaths)) for people15 to 64 years of age. If recent trends of increased binge drinking continue (especially in adolescents and young adults) [4,5], France’s pattern of drinking score may increase to a more detrimental value. This increase in binge drinking will also lead to an increase in the number of alcohol-attributable deaths from alcohol-related diseases, such as ischemic heart disease [35,36] and from intentional and unintentional injuries [16]. Given the magnitude of the alcohol-attributable burden of disease in France, it is imperative to assess the effectiveness of policies and interventions that can reduce this burden.AD is responsible for a large proportion of the alcohol-attributable burden of disease in France, and the current AD treatment coverage rate for France is low, with less than 10% of people with AD being treated. Accordingly, one area for improvement would be to increase treatment coverage rates for people in France with AD [1,29]. In particular, if coverage of pharmacological AD treatment (the most effective treatment observed) were to increase to 40% of all people with AD, we estimated the resulting prevention of 1,311 alcohol-attributable deaths per year in France. Introducing brief interventions in hospitals would also result in similar benefits; people in hospitals have a higher risk of mortality, and reducing alcohol consumption has overly proportional effects in reducing mortality for this group [28]; according to the latest Cochrane analyses, after brief interventions in hospitals the mortality rate within 1 year of the intervention was reduced by 40%. 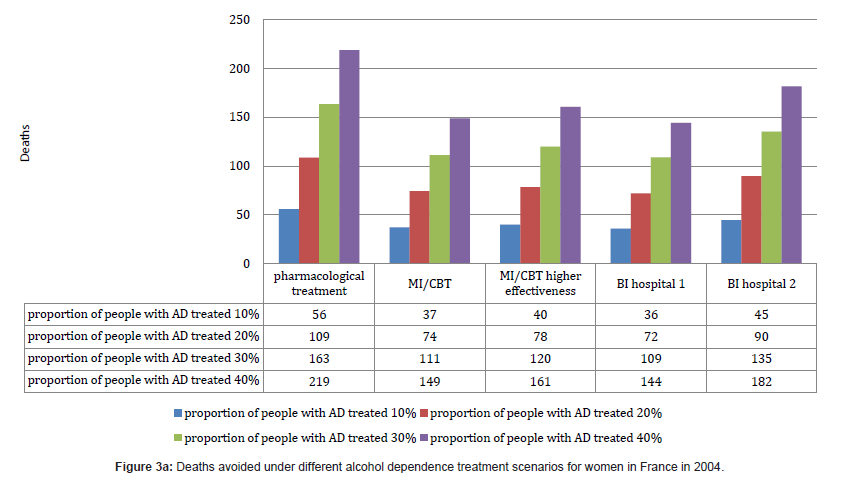 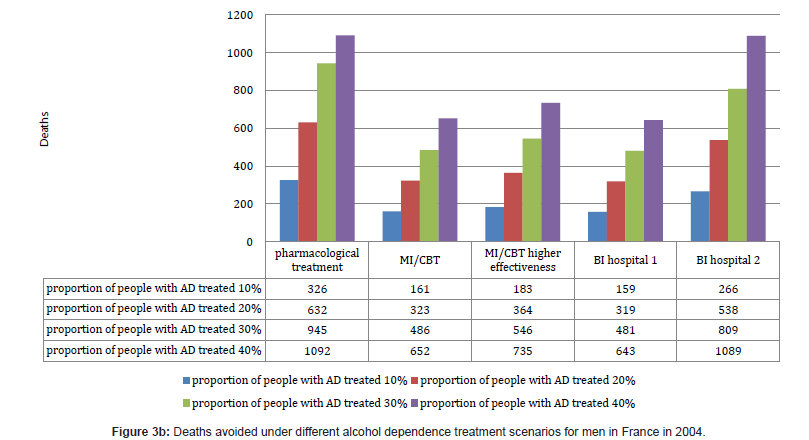 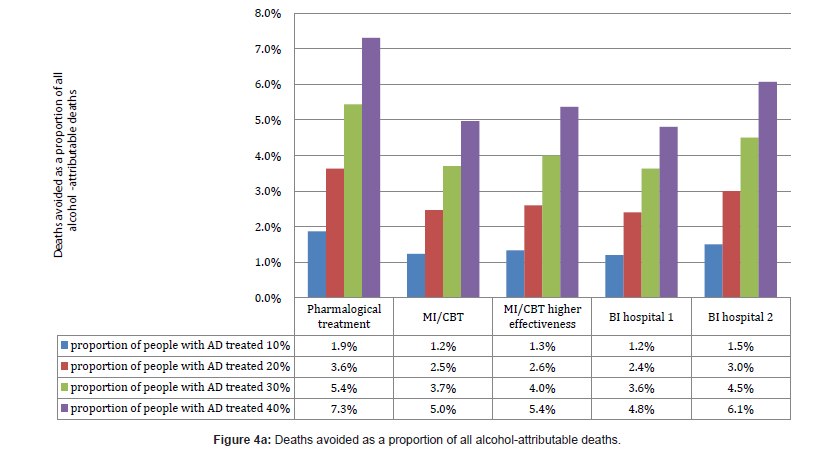 Figure 4a:Deaths avoided as a proportion of all alcohol-attributable deaths.

Our analysis has certain limitations. Information concerning cause of death has long been seen as containing inaccuracies [37], and more recent studies confirm considerable degrees of error in such information [38,39]. Due to the unreliable nature of mortality data, especially for people older than 64 years of age, we excluded individuals who were 65 years or older when performing our analysis.

Exposure estimates for drinking status and binge drinking patterns used in our analysis were measured in 2009, whereas outcomes were measured in 2004; however, the short length of time between 2004 and 2009 should not greatly affect the alcohol-attributable mortality estimates for France, as alcohol consumption in France has remained relatively stable during this time period [12]. The estimates of alcohol consumption used in our analysis were also cross-sectional, i.e., measured more or less concurrently with deaths, whereas long-term patterns of alcohol consumption impact the risk of some chronic diseases such as cancer [40]. Furthermore, our analysis did not include aspects of harms to others (such as motor vehicle accidents, and assaults), which recently have been shown to constitute a large proportion of the burden of injury attributable to alcohol [41]. 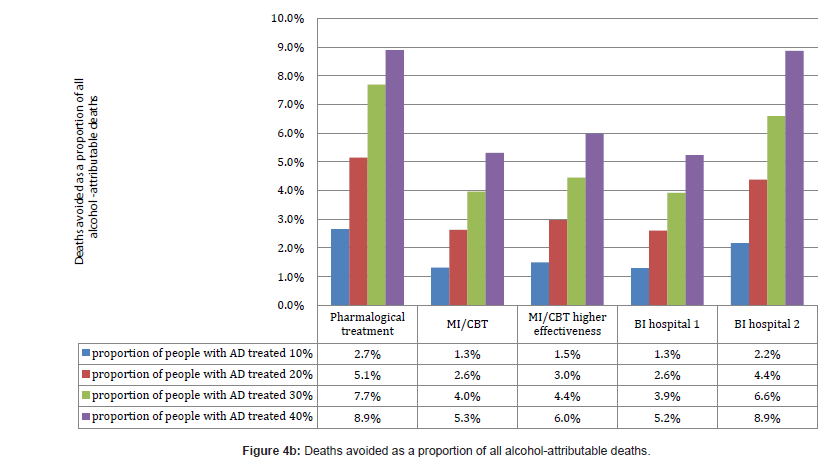 Figure 4b:Deaths avoided as a proportion of all alcohol-attributable deaths.

It is important to note that AD treatment is commonly a combination of therapies, and the results of this study are limited to the effects of single interventions; there may be combinations of interventions that produce more effective results [42]. Thus, the potential decrease in alcohol-attributable mortality in France by increasing AD therapy may be greater than described in this article for the most effective combinations of AD therapies. Additionally, although there is error associated with the estimates of the effectiveness of AD therapy, with the mortality data, and with the alcohol consumption data, the error was not calculated for the potential decrease in alcohol-attributable mortality due to different treatment interventions as the error associated with the estimates of mortality by cause was not available.

Psychotherapy, sometimes combined with pharmacotherapy, is the most common type of AD therapy used in France. The most commonly used psychoanalytic procedures (from most frequent to less frequent) are MI, self-help group facilitation, BIs, CBT, and psychodynamic interventions (based on unpublished study findings).Based on our findings, increasing the proportion of people with AD who undergo pharmacotherapy could help to reduce the alcohol-attributable burden of disease in France.

Lundbeck provided financial support for this study via an unrestricted grant. Lundbeck had no influence on the data gathering or design of this study. Jürgen Rehm received in the past few years unrestricted grants from Eli Lilly, Schering-Plough and Lundbeck, and is a member of the scientific advisory council for Nalmefene.