Copyright: © 2012 Plakht Y, et al. This is an open-access article distributed under the terms of the Creative Commons Attribution License, which permits unrestricted use, distribution, and reproduction in any medium, provided the original author and source are credited.

Alcohol hangover is a common phenomenon, experienced by numerous people amongst alcohol consuming societies. Recent research has demonstrated the impact of this phenomenon on various aspects such as quality of life, cognitive functioning and affect, work effectiveness and economy [1]. Nevertheless, so far, no measure was found to be effective in reducing the burden of hangover, besides alcohol abstinence. While several strategies and products were systematically evaluated, none of them was found efficient [2].

Two of the most purchasable drugs, alcohol and tobacco, are often co-abused. In fact, about 7% of the U.S. population is co-dependent [3,4]. Additionally, alcoholism is estimated to be 10 times more common amongst smokers than nonsmokers [5]. Concurrent use of these drugs poses significant public health concern and a large financial burden upon society.

Results from animal and human studies have demonstrated multiple mechanisms for alcohol and nicotine co-use. Smokers reported that they felt less intoxicated compared with nonsmokers after the administration of an identical dose of alcohol [6]. These findings suggest that smokers are more tolerant to alcohol’s effects. In rodents, co-treatment may be influenced by each drug more effectively than the adverse effects of the both [7]. Supporting this concept, neuroimaging studies, which had been conducted on people during alcohol withdrawal period with continuity of cigarette smoking, found decreased severity of the withdrawal-related changes in gamma-aminobutyric acid (GABA) neurotransmitter activity [8].

Considering these interactions found, it is surprising that several nonscientific internet sites such as, WikiHow, HubPages and HowToPrevent.com, which are full of good advice on preventing a hangover after a night of excessive drinking (lowering alcohol consumption, eating before drinking or avoid dehydration) recommend avoiding smoking, including passive exposure to cigarette smoke during a drinking night in order to reduce hangover symptoms. (http://www. wikihow.com/Prevent-a-Hangover; http://kennywordsmith.hubpages.com/hub/How-To-Get-Over-A-Hang-Over---Best-Hangover-Remedies; http://www.howtoprevent.com/physical-health/how-toprevent-a-hangover/).

This popular concept, that avoiding smoking can ameliorate hangover symptoms is currently not supported by the medical literature. In order to evaluate whether this concept is valid, we conducted a study which compares the tendency to develop hangover symptoms between smokers and non-smokers.

739 University students were recruited in this observational, crosssectional study, during September and October of 2009. 252 subjects have met the exclusion criteria, 47 due to chronic headache or head trauma, 124 due to alcohol abstinence and 81 participants who have not reported their status regarding the important parameters (smoking or measure of hangover symptoms). Finally, 487 students were included in this study. The study was approved by the local Internal Review Board.

Participating subjects filled out questionnaires without the presence of an interviewer, and did not include any recognizable data to assure anonymity. The questionnaires included demographics information regarding cigarette and alcohol consumption and the tendency to develop hangover symptoms.

The demographics had included age, gender and marital status. Cigarette smoking status was assessed as daily number of cigarettes consumed during the last year. Alcohol consumption was reported as the standard-size (pub measure) amount of alcohol “drinks” consumed in a typical drinking during day or night; 1/3 litre of beer, glasses of wine, and “shots” of spirit (liquor, vodka, arak, whiskey etc.), and the number of drinking days in a typical week.

The tendency to develop hangover symptoms was assessed using the Hangover Symptom Scale (HSS), which was developed and validated by Slutske et al. [9]. For the study purposes, we translated the scale to the local language, validated by re-translation to English and compared with the original tool. This tool contained 13 symptoms. For each symptom, the participants reported the frequency of its appearance during the last year, expressed as percentage of drinking occasions after which the symptom occurred, on a 5-point scale, ranging from never (0% of the time) to every time (100% of the time), that were followed the next morning by the symptom (one of the symptoms, vomiting could have occurred either during the night or the next morning). Assessing the percentage of drinking occasions after which hangover symptoms occur partially controls the differences in the frequency of drinking and allows the HSS item scores to be interpreted as hangover vulnerability or proneness [9].

Based on a self-reported smoking status, the participants were defined as non-smokers and smokers. The last group was categorized in 3 equal-sized sub-groups in accordance to a daily number of cigarettes. These categories were: “mild”, “moderate” and “heavy” smokers. Total measured alcohol consumption in a typical week was calculated as daily number of alcohol “drinks” multiplied by number of drinking days in a week (frequency) [9,10].

The primary outcome of the study was the value of HSS score related to the last year. HSS scores for each participant were calculated as a number of experienced symptoms with a possible range of 0-13 (so called “dichotomous approach”), or as sum of ranks with a possible range of 0-52 (“polytomous approach”), as postulated by Slutske at al. [9] . According to the authors, the internal consistencies (Cronbach’s alpha coefficients) for the “dichotomous” and “polytomous” scales were 0.84 and 0.86 respectively. In our sample, Cronbach’s alfa coefficients were 0.86 and 0.89 for the “dichotomous” and “polytomous” scales respectively.

The comparison between the study groups was performed using Chi-square test and Student’s t-test. Comparison of prevalence of specific HSS syndromes was performed with non-parametric Mann-Whitney U test. Since 13 secondary outcomes were defined, we used Bonferroni method for correction for the multiple comparisons, and significance level was set at p=0.0038.

The baseline characteristics of the study population and comparison between non-smokers and smokers are presented in Table 1. Compared to the non-smokers, the smokers were older and consumed a larger amount of various kinds of alcohol (except wine). In addition, the total amount of alcohol consumed was significantly greater amongst smokers.

Table 1: Baseline characteristics and Hangover Symptom Scale (HSS) parameters of study population and in the groups in accordance of smoking status. 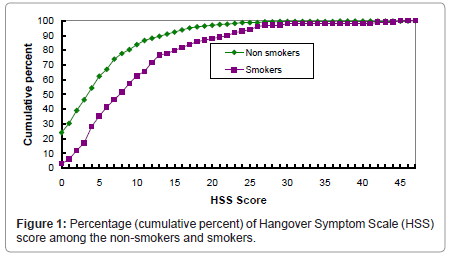 All the hangover symptoms (except anxiety) were reported by smokers to occur in a higher frequency, than by non-smokers (Table 1). These differences remained statistically significant after applying a Bonferroni correction. Using the “dichotomous approach” to the HSS scale, the smoker participants reported, in average, more symptoms: 3.52 (SD=3.2), compared with the non-smokers: 5.66 (SD=3.36) (p<0.001). Furthermore, the percent of participants reporting at least one hangover symptom was significantly higher amongst smokers than non-smokers: 376/388 (97%) vs. 75/99 (75.8%) respectively; p<0.001. Using the “polytomous approach”, the mean HSS score was significantly higher midst smokers than non-smokers: 10.23 (SD=8.44) vs. 5.53 (SD=6.25); p<0.001. The cumulative percentage of the score midst smokers than non-smokers is depicted in Figure 1.

In a multivariate analysis, smoking was found to be independently associated with higher HSS grade (Table 2). The weekly consumption of alcohol, female gender and “non-married” marital status were also independently associated with higher HSS score. No significant relationship between age and HSS score grade was found. The percent of shared variance (adjusted R square) for this model was 11.3%.

The sub-group analyses shows no significant difference in mean HSS score between the genders among non-smokers: 5.57 (SD=6.54) and 5.5 (SD=5.97) and for females and males respectively (p=1). However, amongst smokers, significantly higher mean score of HSS was assigned for females, compared to males: 12.43 (SD=9.63) vs. 8.56 (SD=7.28); p=0.032, as presented in Figure 2. The results of MANOVA shows the independent significant relationship of HSS grade with smoking and gender (p<0.001 and p=0.011 respectively), and with interaction of these two factors (p=0.014). After adding the parameters of age, amount of alcohol and maternal status as the co-variables (MANCOVA) only a minimal change was demonstrated regarding relationship between the gender-smoking interaction and the primary outcome (p=0.019).

In the presented study, we have attempted to compare the tendency to develop alcohol hangover between smokers and non-smokers, in order to evaluate a popular belief that smoking may increase the likelihood to suffer from hangover.

As reported in the literature, cigarette smoking and alcohol consuming are highly co-morbid phenomenons. In our cohort, one-fifth of all students have reported usual cigarette smoking and around one-third of those consumed more than half a cigarette pack daily. These findings are comparable with the results of other studies, in which 17-25% of students were current smokers [11,12]. Expectedly, alcohol consumption was higher amongst smokers.

Our findings seem to support the belief that smokers suffer more from hangover. More than 20% of the non-smokers did not experience hangover at all during the previous year, compared to 3% of the smokers. Smokers tended to report more hangover symptoms and had higher HSS scores compared with the non-smokers, regardless of the amounts of alcohol consumed. This tendency was remarkably stronger among women.

Nevertheless, this tendency to develop hangover was not correlated to the reported daily cigarette consumption of the smokers. It is possible that regular smoking habits do not represent the amounts of cigarettes smoked during drinking nights.

The influence of cigarette smoking on the alcohol hangover was previously hypothesized, but it was never heavily supported by data [13-15]. In one study of college students, smokers tended more to report hangover like experiences, but there was no evidence that smoking status was associated with increased hangover susceptibility [16]. In another work, a correlation between smoking and hangover in a small sample of 18-19 years olds was reported (Jackson et al. unpublished observations. Available at: http://digitalcommons.wustl.edu/guzeposter2006/11).

The pathophysiology of hangover is not fully understood; neither is it the causal relationship between the latter and cigarette smoking. Since hangover is essentially a phenomenon occurring after alcohol levels had dropped to zero, several authors have postulated that its major metabolite, acetaldehyde could contribute to hangover development [15]. Alcohol is metabolized by alcohol dehydrogenase to acetaldehyde which has some of its effects similar to hangover symptoms. Acetaldehyde is also a major component of tobacco smoke, being primarily produced by the combustion of polysaccharides [17,18]. 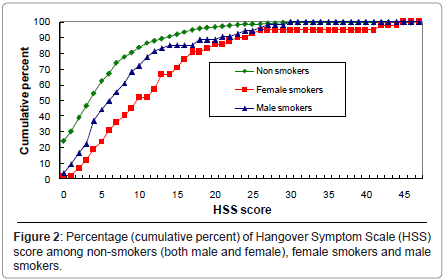 Alcohol consumption can also induce sleep alterations [15]. High alcohol doses induce hypnosis and decreases the latency of onset sleep. However, as blood alcohol decreases, there appear alterations in the sleep pattern, mainly in the second half of the sleep episode. The effects on sleep imply a shorter duration and lower quality of sleep, which could explain part of the hangover symptoms, especially the tiredness and cognitive impairment. It has been recently reported that night smokers tend to suffer from sleep disturbances. It is possible that those sleep abnormalities enhance the hangover symptoms [19]. Nonetheless, the causality may be reversed. If indeed nicotine ameliorate aversive symptoms of alcohol, it is possible that hangover prone alcohol users, self medicate themselves by nicotine, causing the co-morbidity between hangover and cigarette smoking.

The major weakness of our study is its retrospective, self-report design. Nevertheless, the use of a validated tool, and the use of a large, homogenous cohort, somewhat diminish this weakness. Further research is indicated to evaluate the relevance of the findings to other groups of population and to assess the direction of causality between smoking and hangover.

More research is required to understand the role of cigarette smoking and hangover, regardless of the mechanism; it seems that avoiding smoking is a good strategy to reduce morbidity caused by alcohol hangover. If any more reasons were needed to recommend our patients to avoid smoking – here is another one.