Copyright: © 2013 Kanda T, et al. This is an open-access article distributed under the terms of the Creative Commons Attribution License, which permits unrestricted use, distribution, and reproduction in any medium, provided the original author and source are credited.

The androgen receptor (AR) exists in normal liver as well as in human hepatocellular carcinoma (HCC) tissues. Recent studies revealed that AR plays an important role in hepatitis B viral as well as hepatitis C viral hepatocarcinogenesis. The targeting of AR might be developed as a new therapeutic option against HCC. This article provides information regarding the association between AR and HCC.

Hepatitis B virus (HBV) and hepatitis C virus (HCV) are the most commonly implicated risk factors of hepatocellular carcinoma (HCC) [1-3]. Irrespective of its cause, gender differences also exist in its prevalence [4].

Androgen receptor (AR), belonging to nuclear receptors, is putatively involved in the development of cancers such as prostate cancer, HCC and pancreatic cancer [5-7]. Androgen as a ligand interacts with AR, leading to a suggested link between transcriptional control and physiology. AR is characterized by a central DNA-binding domain (DBD), which targets AR to specific DNA sequences known as androgen response elements (AREs). The C-terminal half of the receptor encompasses the ligand-binding domain (LBD), which possesses the essential property of androgen recognition and ensures both specificity and selectivity of the physical response: LBD can be thought of as a molecular switch that, upon binding with ligand, shifts the receptor to a transcriptionally active state [8-10].

Nagasue et al. reported that HCC had a significantly higher concentration of androgen receptors than did the surrounding liver tissue [6]. There are several reports concerning the expression of AR mRNA and AR protein in tumor and in non-tumor parts of liver, suggesting that AR plays an important role in hepatocarcinogenesis [6,16-35]. 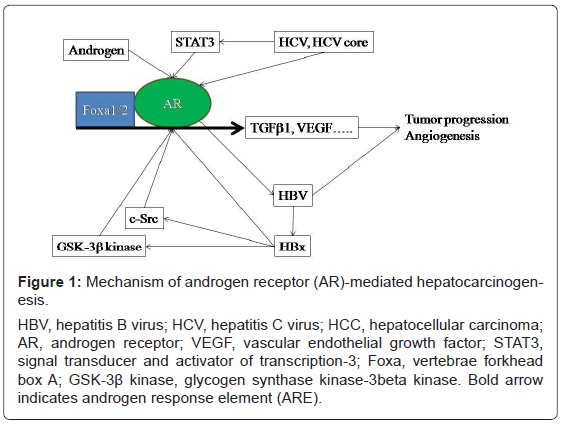 Signal transducer and activator of transcription-3 (STAT3) is often constitutively phosphorylated and activated in human cancers and in transformed cell lines and is implicated in tumorigenesis [45]. HCV core increased STAT3 phosphorylation both at Ser-727 and at Tyr-705, which in turn activates AR [43]. HCV infection also enhances VEGF, one of the target genes of AR [11], and induces in vitro angiogenesis in the presence of androgen [43]. HCV core protein could be an activator of AR in the male-dominant disease HCC.

The male predominance in HBV-related HCC is significantly high, with a ratio of 5-7:1 [4]. HBx is the only HBV nonstructural gene that functions as a multifunctional regulator modulating gene transcription, cell responses to genotoxic stress, protein degradation, apoptosis, and several signaling pathways [46-48]. HBx, which has a size of ~17 kDa, can physically bind to AR [49]. HBx-mediated enhancement of AR activity is androgen-dependent and could be mediated through indirect mechanism involving calcium and c-Src signaling pathways [50]. HBx enhances the AR transcriptional activity through two kinases: c-Src and glycogen synthase kinase-3beta kinase [51]. AR promotes HBV-induced hepatocarcinogenesis through modulation of HBV RNA transcription [52]. The androgen pathway can increase the transcription of HBV through direct binding to the ARE sites in HBV enhancer I, leading to a higher HBV titer in male carriers and increased risk of HCC [53]. These facts together suggest that the targeting of AR might be developed as a new therapeutic strategy against HBV-related HCC [54].

Ma et al. [54] reported that mice lacking hepatic AR developed later and less HCC than their wild-type littermates with comparable serum testosterone in both males and females when using the Cre-Lox conditional knockout mouse model injected with carcinogen and that AR may promote hepatocarcinogenesis via increased cellular oxidative stress and DNA damage, as well as by suppression of p53-mediated DNA damage sensing/repairing system and cell apoptosis. Recently, it has been shown that vertebrae forkhead box A (Foxa) factors and their targets estrogen receptor (ERα) and/or AR play an important role in the sexual dimorphism of HCC [55]. In conclusion, AR as well as ERα [56] could be involved in human hepatocarcinogenesis. Targeting AR might be developed as new molecular-target therapy against not only HBV-related but also HCV-related HCC.