Proper nutrition has long been recognized as a critical factor in promoting normal growth and sustaining shrimp health. The development of high-quality diets is a factor that has significantly contributed to explosive expansion of shrimp farming in the last two decades. Larval phase is the most sensitive stage in shrimp life, especially when the yolk sac is absorbed. In this stage, suitable food is necessary to inhibit mortality and provide normal metabolism [1]. Shrimp larval growth in aquaculture has traditionally been dependent on live food such as Chaetoceros, Tetraselmis, Skeletonema and Chlorella [2,3]. Culturing of live food is, however, expensive and complicated. Prepared diets, on the other hand, not only provide the essential nutrients that are required for normal physiological functioning, but also may greatly contribute to reducing the cost of production by eliminating or, at least, minimizing reliance on the live food and its often expensive associate infrastructure.

Lots of works have recently been carried out to find appropriate prepared diets as alternative sources to live food, among which Spirulina Powder (SPM), encapsulated Spirulina and Z plus supplement are worth mentioning. Spirulina platensis is a fast growing cyanobacter of large size (0.5 mm) and capable of growing in high salinity and alkalinity. The biomass of S. platensis has been recognized to be a “wonderful health food” for having high protein and various compounds, such as essential fatty acids (linoleic and gamma linolenic acids), essential amino acids, B-complex vitamins and biopigments [4-7]. Several studies have been conducted using dried Spirulina as a supplement in diets of crustaceans. S. platensis meal is available at a commercial scale; thus its use in feeds for aquaculture is possible [3]. Spirulina have already been tested as a substitute protein source for Cyprinus carpio, where equal or even higher growth rates were obtained by diets containing 25% algae meal, replacing 80% of the dietary fishmeal [8]. Addition of Spirulina in the diet of giant freshwater prawn (Macrobrachium rosenbergii) significantly improved growth, survival and feed utilization regardless of supplementation level in range of 5-20% [9]. Partial replacement of fish meal with S. platensis has also been evaluated in juvenile Pacific white shrimp, Litopenaeus vannamei, with promising result [10].

With a wideeographic distribution from the south and east Africa to India and Sri Lanka, including the Red Sea, Persian Gulf [11], the green tiger prawn, P. semisulcatus, is one of the most common and commercially important marine shrimp in the Indo-West Pacific region and enjoys a good aquaculture potential background. In recent years, there has been increasing interest in the culture of P. semisulcatus in some countries of the Middle East, including Kuwait and other Gulf countries [12]; Egypt [13] and Turkey [14]. Although a considerable range of information on the dietary and nutritional requirements of a number of penaeid shrimp, including Penaeus japonicas, P. monodon, and Litopenaeus vannamei, have been studied thoroughly for their nutritional requirements [15], not much information is available for P. semisulcatus [16].

The present work has focused on the application of Spirulina powder, produced in Iran as a new and alternative source to live feed in aquaculture industry, and its effect on the growth and survival rates of the larval green tiger shrimp, P. semisulcatus, as an endemic species to the Persian Gulf have been compared with other common food in hatcheries.

This research was carried out in Bandargah Station of shrimp research center in Bushehr. The pure stock of Spirulina platensis was imported from Indonesia, in order to produce biomass and powder of Spirulina, Spirulina was cultured in laboratory condition and biomass of Spirulina was produced to for powder according to Jourdan procedure [17].

This study was conducted in Bandargah Station of Bushehr and the required nauplii of the project were prepared from cultured ablated brood stocks. Our study was designed as a follows: Four treatments from no. 1 up to no. 4 were Spirulina platensis powder that produced in Iran, Spirulina platensis powder and Z plus combination, Z plus powder and imported concentration of enriched Spirulina (M.C.F), respectively and the control was Chaetoceros sp. algae (Table 1). All treatments and control were prepared in triplicate. Larvae were randomly introduced in polyethylene containers. All containers were cleaned by detergents and disinfected by formalin and washed by tap water. Finally one hundred nauplii were introduced in each container (treatments and control). The containers were fully filled with aerated sea water with 30ºC temperature and 36 ppt in salinity. A plan which was carried out four times a day was started from the stage of fifth nauplii to early post larvae. The powder solution with equal amount in each meal was 5 mg/l.

Table 2: The chemical composition of produced Spirulina platensis powder in Iran and Z plus powder.

At the first stage of mysis, 0.5 gr/l (20 Artemia nauplii) of frozen Artemia salina nauplii was added for each container. So, we had to reduce the amount of algae with the ratio of 25% algae plus 75% Artemia nauplii. At three stages of zoa I, zoa III and mysis III, the average number of larva were counted three simultaneous times and the survival rate was measured. The total length of larvae was measured every day by an optical microscope.

An ANOVA test was applied to compare the effects of different feeds on survival rate and length.

The survival rates of P. semisulcatus larvae in 3 stages have been presented in Table 3 and Figure 1. 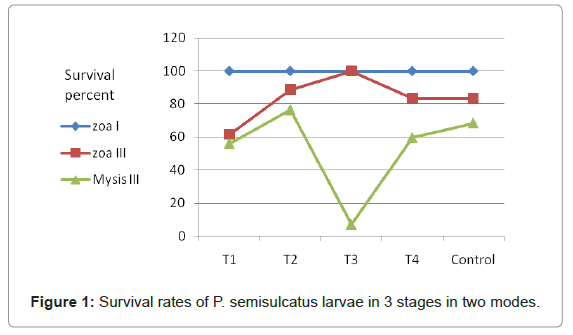 The average length of P. semisulcatus larvae is shown in Figure 2 and 3 in all treatments, and in the control from zoa to mysis III. 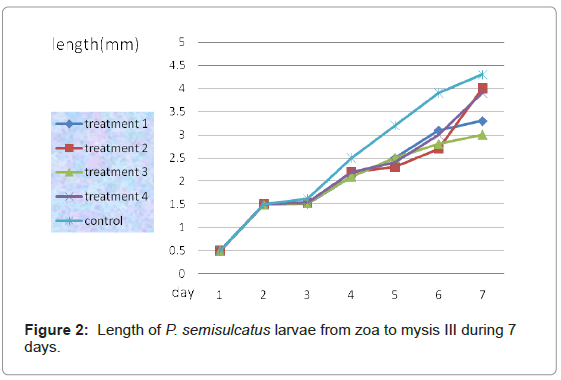 Figure 2: Length of P. semisulcatus larvae from zoa to mysis III during 7 days. 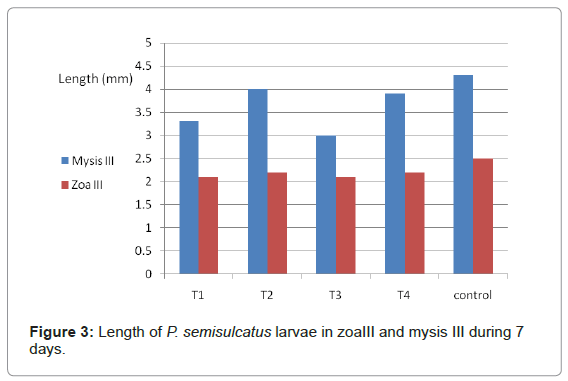 Figure 3: Length of P. semisulcatus larvae in zoaIII and mysis III during 7 days.

In the zoa stage, larvae start to be active for feeding by catching marine microalgae activity.

The existence of suitable floating food is necessary in the farm tank. Skeletonema sp., Chaetoseros sp., Tetraselmis sp. and Chlorella sp. microalgae are usually used in the zoa stage. Other foods, such as egg vitellus, egg and yeast are used as supplement food some times, but the water pollution in the tank will increase [2]. Also, application of Spirulina sp. individually or in combination with other foods was used for species of shrimp larvae like Litopenaeus vannamei [10], L. schmitti [3,18], Peneaus monodon in different percents [19], while there is not enough information about the special species of P. semisulcatus.

In this research, Spirulina and other foods were used in hatcheries individually or in combination to obtain the best growth and survival rates of P. semisulcatus larvae. Statistical analysis shows that there isn`t any significant difference in the growth factor but the difference between treatments and control was significant (P<0.001). Another report showed that the average growth of Litopenaeus vannamei juvenile fed by lyophilized powder of Spirulina platensis was 86 mg/day over the experimental period [10]. Also, the study of using Spirulina platensis in different dry weights for nursing black tiger shrimp post larvae 10 showed that the growth of shrimp larvae fed by using 5% of Spirulina platensis was significantly higher (14.25 mm) than that of shrimp larvae in control, and the survival rates for treatment groups were also higher (69.5%) than that of control [20].

Jaime-Ceballos et al. [18] evaluated Spirulina platensis in Litopenaeus schmitti larvae diet from mysis I to post larvae. The survival rate was about 80% in each treatment. In contrast to control, the size of post larvae was so small. Whiles in this research, the survival rate in all treatments was less than 80% dependent on the amount and times of the feeding (4 times in contrast to 6 times feeding), that P. semisulcatus larvae are more sensitive than other species. In the work of Jaime-Ceballos et al. [3], Spirulina platensis powder is replaced by Chaetoceros mulleri in Litopenaeus schmitti larvae diet, and then the length of larvae are compared with each other.

There was significant relation between the level of replacement and the length of larvae, the maximum length was acquired in 30%, but in this research, the combination ratio for Z plus and produced Spirulina powder was 50% (1:1) and the best survival rate was observed with this ratio (P<0.001).

Treatment 3 (Z plus) had 50% protein and 14% unsaturated fatty acid, but its final survival rate was very low (7%), and in comparison to other treatments it had little growth (3 mm), while in zoa III, the survival rate of this treatment was 88.8%. This decay maybe related to the situation of larvae in mysis stage.

The longest length of larvae was observed in treatment 4 (M.C.F), but its survival rate was 59.6%. According to the component of this diet, it had many different nutrients with high protein, such as meat powder, squid, egg, Spirulina …), mineral, vitamins. It is an enriched food that is produced with industrial methods. In comparison to the produced Spirulina in this project, it had dark blue color, suitable granulation for larvae and instantly dissolved in water, while the previous produced Spirulina in treatment 1 had green color and difficult solvability in water. When the survival rate is decreased in mysis III, other larvae could take more food and then they have more growth.

Hagh Nejat et al. [2] evaluated P. semisulcatus larvae feeding in zoa stage with Tetraselmis, Chaetoceros, Skeletonema and Chlorella individually and syncretistic. The most survival rate in the individual feeding was 82% and the growth rate was 3.55 mm for Skeletonema, and in the syncretistic feeding, the best survival rate was 97% in combination with Tetraselmis and Chaetoceros. The general results showed that the growth rate of larvae in syncretistic feeding was larger than individual feeding.

In our research, the control (Chaetoceros sp.) had a fast growth rate with the highest survival rate after treatment 2 (68.5%). Chaetoceros had the best size among other microalgae that is used in larviculture for zoa feeding, as live food, which can provide lots of feeding necessities. In the other research, Penaeus indicus zoa I larvae reared successfully on the mixed algal feed of Tetraselmis chuii (25 cells/μl) and Skeletonema costatum (35 cells/μl), together with five Artemia nauplii per μl from mysis I onwards until metamorphosis in only 6-7 days [23]. While the survival percentage of P. monodon post larvae fed on Arthrospira fusiformis was significantly higher at inclusion levels of 10% and 20%. The results suggest that Arthrospira fusiformis cannot serve as the sole protein source in the diet of P. monodon postlarvae, but can be effectively used as a supplementary protein source [24]. This result was the same as our research. Generally, acombination of Z plus (consisting of 50 % protein) and powder Spirulina (dry weight protein 46.6%) was found as the best diet in this project.

We extend our appreciation to Dr. Neda Soltani and Dr. Shakori for identification of Spirulina species in Shahid Beheshti University. Thanks are also due to Mr Zendebudi, Dalirpour and Dr. Pazir for collaborating with us in Bushehr Bandargah Station. Furthermore, we like to thank Dr. Seif Abadi and Dr. Zohreh Amiri who kindly provided helpful advice for editing and statistical analysis.