Methods: A self-reported survey was distributed using convenience sampling among adult smokers over 18 years at two sites in China. Potential predictors, including socio-demographic characteristics, health conditions, and addiction level that affect smokers’ beliefs in the effectiveness of either pharmacologic or behavioral smoking cessation interventions were explored using multivariate logistic regression.

Smoking remains the leading preventable cause of morbidity and mortality [1]. With an estimated 1.22 billion smokers worldwide, the World Health Organization (WHO) reported that the global mortality of smoking was 5.4 million in year 2004 [2]. Cigarette smoking greatly increases the risk of lung cancer and heart attacks (coronary heart disease and acute myocardial infarction) [3-6]. It is also a risk factor for chronic obstructive pulmonary disease and cancers, including pharyngeal, esophageal, bladder, laryngeal, and pancreatic cancer [7-9]. Life expectancy of a regular smoker is roughly 7-13 years shorter than that of a non-smoker on average [10].

In China, approximately 3000 deaths/day were attributable to smoking in 2005, reaching almost seven million deaths caused by smoking [11,12]. With a prevalence of 67% among males in China, smoking is estimated to kill approximately one-third of Chinese men who are under 30 years old [12]. Annually, over 320 million smokers consume an approximate 1.7 trillion cigarettes accounting for 40% of cigarettes smoked all over the world, and costing five billion U.S. dollars in 2000, 3.1% of China’s national health expenditures [12-14].

Smoking cessation is highly recommended by public health departments of various organizations, like WHO and Centers for Disease Control (CDC) [15,16]. However, it leads to physiological symptoms of withdrawal caused by nicotine dependence, which involves craving for tobacco and may lead to failing an attempt to quit smoking [17].

A cross-sectional, convenience sampling study utilizing a selfreported survey was conducted among adults (over 18 years), in China between October 30, 2009 and February 5, 2010.

The questionnaire was adapted from previously used surveys [28,29], translated into Chinese. Translation and back-translation were used to obtain a conceptual equivalence from English to Chinese. The survey was distributed at two sites in China, a government agency and a trading company. These two sites were used to include adult participants of diverse socio-demographic characteristics. Adults who visited these two sites were asked if they were willing to anonymously participate in completing a 15-20 minute survey regarding smoking. If they agreed, they were given a survey and asked to drop the completed survey in a sealed box that was available at each of these sites. Informed consent was provided with the survey and participation was voluntary. The study was approved by the Institution Review Board of University of Houston for the Protection of Human Subjects.

The questionnaire inquired about: socio-demographic characteristics, health conditions, addiction level, as well as beliefs regarding effectiveness of different smoking cessation interventions. Various socio-demographic characteristics including gender, age, marital status, residence, monthly income, employment status, and educational level were examined. Addiction level consisted of six questions: ‘How many cigarettes do you smoke every day?’, ‘How soon after you wake up do you smoke your first cigarette?’, ‘Which cigarette would you most hate to give up?’, ‘Do you find it hard to keep from smoking cigarettes in places where you are not allowed to smoke?’, ‘Do you smoke if you are sick in bed?’, and ‘Do you smoke more during the first two hours of the day than during the rest of the day?’. ‘Smokers’ were defined as those who smoked at least one cigarette in the past 30 days.

In pharmacologic methods, NRT products are over-the-counter (OTC) drugs, while cessation medications need prescriptions. To further analyze the beliefs in pharmacologic methods, the first outcome that whether smokers believed that NRT (including gum, patch, lozenge, spray, and inhaler) or cessation medications (including antidepressant, Bupropion, and nicotinic receptor agonist, Varenicline) was effective in smoking cessation was tested individually. Beliefs in the effectiveness of various interventions were defined as ‘yes’ if they ‘agree’ or ‘strongly agree’ that ‘the smoking cessation intervention would be effective in helping their ability to quit smoking’, while ‘no’ if they ‘disagree’ or ‘strongly disagree’.

Figure 1 shows the frequency distribution of the beliefs in effectiveness of different smoking cessation interventions among smokers. Among 365 smokers, 46.9% (n=171) believed NRT products (nicotine gum, patch, and/or inhaler) would be effective and 46.3% (n=169) believed cessation medications would be beneficial, respectively. Nicotine gum or lozenge was favorable in 43.3% (n=158) of smokers, followed by nicotine patch (34.0%, n=124) and nicotine inhaler or nasal spray only (29%, n=106). More than half of the smokers (58.1%, n=212) believed that discussions with health care providers would be effective, followed by educational program (54.3%, n=198), and TV or radio program against smoking (46.9%, n=171). Smokers' characteristics are summarized in Table 2 including results of chi-square test with previous defined outcome variables. 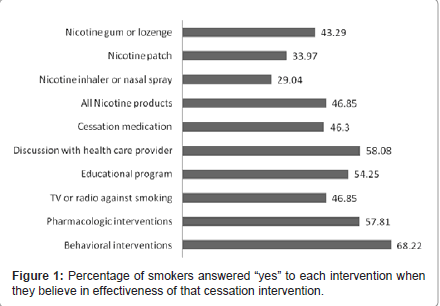 Figure 1: Percentage of smokers answered “yes” to each intervention when they believe in effectiveness of that cessation intervention.

Univariate (unadjusted OR) and multivariate logistic regression (adjusted OR) results with the beliefs regarding the effectiveness of each intervention category are presented in Table 3 and Table 4.

Table 3: Univariate and Multivariate Logistic Regression Results of Predictors of Beliefs in Effectiveness of Different Interventions among Chinese.

Table 4: Univariate and Multivariate Logistic Regression Results of Predictors of Beliefs in Effectiveness of Different Interventions among Chinese Adult Smokers.

In our study, we found that nearly half of respondents believed in the effectiveness of NRT products, cessation medications, nicotine gum or lozenge, and TV or radio program against smoking, while about 30% of respondents believed in the effectiveness of nicotine patch and nicotine inhaler or nasal spray only. More than half of the smokers believed that discussions with health care providers would be effective, followed by educational program.

We found that smokers aged above 40 years were less likely to believe pharmacologic and behavioral methods than those aged between 18 and 40 years in China. This might be because older people in China were less likely to accept the new concept of smoking cessation interventions and might be opposed to the idea of taking medications when no illness was diagosed. This finding is consistent with the results from previous studies that higher age of the smokers showed lower intention to quit smoking using any intervention [32,33].

We found that respondents that reside in urban areas were less likely to believe in the effectiveness of pharmacologic methods than those residing in rural areas, which was unexpected. This might be reflective of the social behavior of smoking in urban areas, or concerns about the adverse effect of cessation medications, because of the traditional prejudice against all chemical drugs due to perceived toxicity.

Smokers who had higher addiction level, defined as inhale when smoking, as previously reported [35], were more likely to believe in effectiveness of pharmacologic methods than those who had lower addiction level. This finding suggests that smokers with high addiction level might believe that they may need aids such as a medication to relieve the withdral symptoms associated with quitting as they feel dependent on the cigarette. Further research is needed to identify specific medications that could be benficial among Chinese smokers.

This study has some limitations. First, the study was conducted using convenience sampling, thus, we are not able to describe nonparticipants. Generalizability might be limited to similar subpopulations as the surveys were collected from only two sites in China, but participants were randomly picked during the time the survey was administered. There were some missing values for some participants. We removed partially completed surveys to minimize inconsistency and bias due to missing value. Information bias may be generated when the survey was administered. Translation back-translation method was conducted before distribution of the survey, to decrease information bias.

Despite these limitations, this is the first study to identify factors associated with Chinese smokers’ beliefs regarding effectiveness of various available cessation interventions. To increase the utilization of the cessation interventions, smokers’ beliefs should be considered. Increasing accessibility of pharmacological interventions can be directly beneficial, to smokers with younger age, higher education, higher income, higher addiction and who reside in rural area. While behavioral interventions can be mostly beneficial to smokers with younger age, higher education and light smokers. Our findings suggest the urgent need to: (1) increase awareness of the effectiveness of pharmacologic and behavioral methods by healthcare provider, government and mass media; (2) encourage the utilization of pharmacologic and behavioral methods; (3) provide resources and access for obtaining smoking cessation assistance; (4) additional efforts are needed among smokers of older age, low educational level, low income, high level of addiction, and heavy smoking.

We thank Dr. Ronald J. Peters for his permission to use the self-report survey.

Copyright: © 2011 Yu Y, et al. This is an open-access article distributed under the terms of the Creative Commons Attribution License, which permits unrestricted use, distribution, and reproduction in any medium, provided the original author and source are credited.