Crab products are significantly important sources of nutrition in the human diet. Decapods crustaceans and other marine benthic invertebrates with complex life cycles develop through a planktonic larval and a benthic juvenile–adult phase. The larvae show dramatic growth and morphogenetic changes, which are affected by environmental conditions. Changes in the biochemical composition of decapod crustacean larvae were studied in several species [1-3]. They typically show a high percentage of protein (>30%), followed by lipids (<20%), chitin (<15%) and free carbohydrates (<5%). The variation is mainly depends on the environmental factors such as temperature [4,5], food availability [6-10] and salinity [3,11]. The Palaemonid females extrude their eggs and carry them under the abdomen until hatching and the eggs are rich in yolk substances that are used as embryonic development progresses. The utilization of yolk substances closely correlates with the embryonic development. Protein is one of the main components of yolk, plays an important role in both morphogenesis and energy supply in embryos [12,13]. During the embryonic development stages, lipid is not only a kind of energy source, but also components of biological membranes and pigments of compound eyes. It is, therefore, important to understand the metabolic changes occurring in larvae as they progress through developmental stages. There is little information available on the biochemical composition during embryonic development and freshly hatched zoea of palaemonid prawn in general and no information about Macrobrachium idea in particular. So the present study was designed to know the biochemical changes in the embryonic and freshly hatched first zoea stages of edible prawn, Macrobrachium idea.

The animals were collected from Ponnanthittu (Lat.11°28’41’N; Long. 79°45’30’E) waters which is located 2 km south to Parangipettai and connected with Vellar estuary. The sizes of the animals collected were ranged from 35 to 108mm in length. Totally 240 specimens were collected and transported to the laboratory in live condition. After reaching the laboratory they were washed carefully with distilled water to remove dust and algal particles and ice killed.

The freshly collected berried females were segregated into four arbitrary stages as described by [14-17]. The color and diameter of the eggs were noted before segregation and small clumps of eggs was snipped from random locations in each clutch using sharp scissors. All the developing embryos were examined with a MEIJI binocular dissecting microscope (100x) to ensure that only viable embryos were sampled and the colour of the embryo were also observed. The diameter of the eggs was measured using a micrometer mounted in the ocular of a dissecting microscope. Eggs were classified into 4 stages based on the following characteristic features (Table 1).

The eggs were blot dried with filter paper and transferred to the previously weighed dry paper. The dry weight of the eggs was determined after drying them in a hot-air oven at 60ºC for 24 hours. Then the samples were stored in desiccators with calcium chloride until further analysis.

The protein, carbohydrate and lipid contents were estimated by adopting the standard methods of [18-20] respectively.

Moisture: The body tissue as a whole was dried in an electric oven at 60°C until a constant weight was reached and then it was weighed in an electronic balance to the nearest 0.1 mg. The percentage of dry matter in the body was calculated. The differences in weight between wet and dried tissues represented the weight of water in the body tissue, which was expressed as percentage.

The fatty and methyl esters of the sample was injected into the gas chromatography (GC-6890) capillary column coated with 5% phenyl silicon at a temperature from 170º C to 300º C for 23.33 minutes. Flame ionization detector was used for analysis. Based on the retention time, the different fatty acids in the samples were identified. Triplicate was maintained for each experiment.

The amino acids were determined by HPLC analyzer (Lachromehitachi). Five microliter of amino acids standards mixture sample were injected into the column (DENALIC18 5MICROMM 4.6mm x 150mm). The flow rate was about 1 ml per minute, ambient temperature of 23ºC was maintained and sample was detected at 254 nm by following the method of [21].

The proximate composition of four egg stages and 1st zoeal stage of Macrobrachium idea are presented in Figure 1. 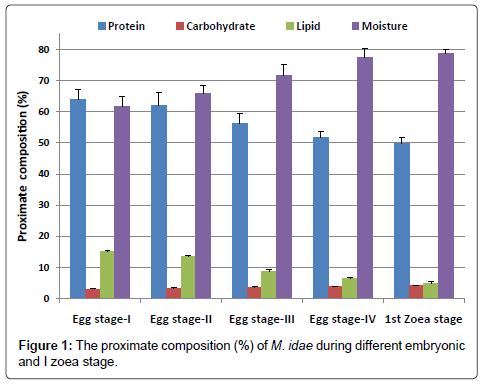 Figure 1: The proximate composition (%) of M. idae during different embryonic and I zoea stage.

The carbohydrate content was increased from egg stage-I (3.06%) to freshly hatched Ist zoea (4.06%).

In the present study the protein content in egg stage I was maximum (63.98%) due to the deposit of yolk. But the protein levels started decreasing when the development progresed. As the embryo developing, the yolk deposited is utilised for the development. This may be the reason for the low value of protein seen in egg stage IV. According to [22] the protein values decreased gradually as developing stages proceeds in P. pelagicus and P. sanguinolentus. Similar observation was made by [23] in Emerita holthuisi and [24] in Thalamita crenata. Needham [25] stated that the terrestrial animal utilised fat as the source of energy for their development whereas in aquatic forms, protein was the source of energy. The protein content of the yolk is important for the tissue differentiation and organization particularly for the cuticle layers, muscle, the digestive and nervous system [26]. Barnes and Pandian [27,28] reported that the protein in developing eggs is progressively depleted and they also suggested the possible utilization of protein during embryogenesis to meet the metabolic demand.

Lipid plays a central role in the embryonic metabolism as they represent the most important energy source and form atleast 60% of the total energy expenditure of the developing crustacean embryo [33]. Large decapod eggs have a relatively high fat percentage and low density when compared to small eggs [34]. Lipid value obtained in the present study varied between 14.97% (stage-I) to 6.36% (stage-IV) which is comparatively higher than that of M. idella idella available from Cochin backwaters [30] and Vellar estuary [31]. Ammar [32] reported more or less similar values in M. idella idella. However, lipid values shown gradual increase with development in P.pelagicus and P.sanguinolentus [22]. Needham [25] classified the crustacean eggs as cleidoic and non – cleidoic types of eggs. The cleidoic eggs are not dependent on the environment for water and salt (ash); oxidation of protein is suppressed to considerable extend and fat oxidation is greatly enhanced, serving as main source for the embryonic metabolism. A similar pattern has been reported for Callinectes sapidus [35] and Xantho bidentatus [26]. The crab Caridina nilotica and prawn M. malcolmsonii derived more energy from fat [36,37].

Developing eggs of crustaceans absorb water [38,39]. In M. rosenbergii the egg volume is increased slowly from fertilized egg stage to zoea stage indicated that there were prominent correlation between egg volume and water content [29].The absorption of water increases the internal osmotic pressure resulting in osmotic hatching of egg and accumulation of water decreases the specific gravity of developing eggs and finally the free floating planktonic larvae released. The increase in water content of the eggs is due to the absorption of water through the egg membrane of the retention of metabolic water since water is the ‘byproduct’ of respiration. The oxidation of 100 gm of lipid releases 107.7 gm of water, the same amount of protein produces 111.3 gm of water and carbohydrate oxidation liberates 55.5 gm of water [40]. The weight of eggs during zoea stage increased since fertilized stage, mainly because of the increased water content. Water provided a liquid environment for embryo and the higher water pressure during zoea stage might be cause of the embryo breaking through the egg membrane in preparation for hatching [29].

In the present study the lipid acted as the most important energy source in the embryonic metabolism of M. idae. The total lipid content of egg stage-I (14.97 ± 0.18%) expected for formation of the organs, lipid was mainly used as a source of energy. Rapid decrease of total lipids in egg stages-III and IV was closely associated with the formation and development of many organ anlages. Brain anlage and heart anlage came into being. Compound eyes turned larger, hemolymph started to flow and heart beats at about 200 times per minutes in zoea stage [41,42]. More energy was needed and some fatty acids turned into component of organs in these two stages. In zoea stage, lipids in yolk were used up. The zoea stage of M. rosenbergii lasted about 90 h, and more energy was needed. So some fatty acids were probably used in the synthesis of organs during these stages [29]. The consumption pattern of different fatty acids in eggs of M. rosenbergii during the embryonic development did not differ markedly from that of other crustaceans [43-45]. The most important fatty acids were C16:0, C18:0, C16:1, C18:1n-9 and C18:2n-6 in eggs of M. rosenbergii. In the present study most important fatty acids components in M. idae were C16:0, C18:0, C18:1n-9 as in M. rosenbergii. The first zoea stage of M. idae is nonfeeding stage, the remaining nutriment favours their independence of external energy resources when external feeding begins and would increase the changes for the first successful moult. Yao [29] reported that in M. rosenbergii the remaining yolks in the eggs are utilized by the first larval stage as the first larva is non-feeding stage.

It has been revealed that the amino acids [46], monosaccharides [47] and nucleosides [48] could be transported into the embryos of the marine invertebrates. Rosa [45] assumed that embryos of N. norvegicus could absorb some compounds. In the present study, the content of essential amino acids increased in eggs, may be the result of organic compounds could be transported into the embryos of M. idae. Even though the amino acids (EAA) and Total Amino Acids (TAA) contributed to the completion of the embryonic development of M .idae the ratio of EAA and TAA content remained unchanged during different embryonic development stages. But when compared first zoea stage to the egg stages the EAA and TAA were less than egg stages. It may be because of the first zoea stage does not feed externally and utilizes the yolk present inside the zoea stage. And the zoea doesn’t have the capacity of absolving organic compounds from the external water source as in the egg stages. The unchanged EAA and TAA were also determined in the eggs of M. rosenbergii [29].

The increase in TAA is indicative of the fact that protein in yolk act as the main structural substance during embryonic development of M. idae. Increases in TAA were also reported in the eggs of N. norvegicus [45] and in M. rosenbergii [29]. Quantitively the most important amino acids were leucine, lysine, valine, arginine and glutamic acid during the embryonic development of M. idae. Regarding the function of single amino acid, leucine is a ketone-producing amino acid. It could be transformed into acetyl-CoA and acetyl-acetic acid, which are important intermediates in carbohydrate and lipid metabolism [49]. Arginine was proven to be crucial in energy metabolism by maintaining glycolysis under hypoxic conditions [50]. Valine is a carbohydrateproducing amino acid and may be associated with carbohydrate metabolism through citric acid cycle. Content of glutamic acid was high during embryonic development, which may have resulted from nitrogen metabolism in the eggs of M. idae. Glutamic acid is turned into glutamine, which is deaminated to produce NH3 [49]. NH3 can be excreted along with Cl-. An increase in the content of NH4Cl after the blastula stage also suggests that NH4+ and Cl- are being excreted together. Tyrosine can be used to synthesize melanin [49], which plays a central role in the accumulation of compound eye pigments. High content of these amino acids is closely correlated with their important role in the embryo.