Introduction: On January 11, 2009, Taiwan initiated a new anti-smoking law - smoking is not permitted at any public place with more than three people. No studies regarding cigarette smoking have been conducted after the implementation of the new policy. The objective of the study was to examine cigarette smoking among a sample of Taiwanese adults and correlates of its use.

Methods: A cross-sectional study was conducted in a convenient sample of willing adults 18 years or older in Taipei, Taiwan, from January 2011 to May 2011. Survey questions included: socio-demographic characteristics, health status and mental health, tobacco use history, attitudes and intentions of tobacco use, and factors associated with tobacco use. Logistic regression models were constructed to determine predictors of ever-use (model 1) and past 30- day use (model 2) of cigarette.

Conclusion: The study demonstrated high rates of cigarette smoking in Taiwan. These findings underscore the magnitude of the smoking problem in the Taiwanese population and the urgent need for effective interventions. Future research should focus on developing interventions that incorporate the predictors identified.

Cigarette smoking also is a burden to the society. In 2001, smoking attributable years of potential life lost (YPLL) totaled 217,761 years for males and 15,462 years for females, and the corresponding productivity loss was US$1,371 million for males and US$18.7 million for females in Taiwan [10]. Health hazards inflicted by tobacco cost the government about NT$20 billion (US$6.67 million) for medical expenses and brought about NT$160 billion (US$53.33 million) loss of gross domestic product (GDP) per year in Taiwan [8].

On January 11, 2009, Taiwan initiated a new anti-smoking law - smoking is not permitted at any public place with more than three people. Individuals found smoking in smoke-free facilities will be fined between NT$2,000 and NT$10,000 (US$67 to US$334). No study has adequately examined the predictors and correlates of cigarette smoking in the general population of adults in Taiwan after the implementation of the new law. Therefore, the objective of this study was to determine the rate of cigarette smoking among a sample of adults in Taiwan as well as correlates of its use. Successful strategies that will reduce cigarette smoking and prevent further spread will require knowledge of these predictors and correlates. It is the first step of a successful intervention.

A cross-sectional study was conducted in a convenient sample of willing adults 18 years or older in Taipei, Taiwan from January 2011 to May 2011.

The G-power 3.1 statistical software [11] was used for power analysis and determined that 961 participants are needed for a two-tail analysis using logistic regression with 0.05 α-level, 0.8 power, and 1.2 odds ratio.

The survey was adapted from a previously used self-report survey [12,13]. A test-retest reliability evaluation of the instrument was performed and all correlation coefficients were above 0.7. Survey distribution sites included an international corporation and a brunch cafeteria. These sites were used to include adult participants of various ages, socioeconomic status and professions. Adults entering the sites were asked if they were willing to participate for 10-15 minutes in an anonymous written survey regarding smoking habits and attitudes towards smoking. If they agreed, they were given a survey and asked to drop the completed survey in a sealed box that was available in each of these sites.

The study was approved by the Institution Review Board of University of Houston for the Protection of Human Subjects.

Descriptive statistics and chi-square analyses were used to determine the frequencies and associations of sample characteristics with the two outcomes previously described. Bivariate analyses of participant characteristics were carried out with the two outcome variables, and results were presented as unadjusted odds ratios (OR) with 95% confidence intervals (CI). Co-linearity between the significant independent variables was assessed and multivariate logistic regression models were conducted to determine predictors for each of the two outcomes. Variables with p<0.2 in the bivariate analyses were included and backward elimination was used to arrive at the final models. Results were presented as adjusted ORs with 95% CIs. All statistical analyses were carried out using SAS statistical package version 9.2.

The response rate was approximately 58% with 926 respondents completing the survey. Lack of time was the main reason for nonparticipation as completion time for the survey was 10-15 minutes. Participant characteristics are described in Table 1 (Data shown as supplementary). More than half of the participants were male (57.8%) and younger than 25 years old (53.0%). Most of the participants had a college degree (77.9%) and were working or studying in a nonmedical field (87.9%). Mean age ±SD was 28.71±10.19. Figure 1 shows the sample smoking rates with the two definitions, with more than half of the study sample had previously smoked cigarette (54.4%), and approximately 42% in the past 30 days. The past 30-day smoking rate was approximately 54.2% for men and 25.6% for women. The age of onset for smoking was 17.25 years old. Table 1 (Data shown as supplementary) also summarizes the results of the chi-square analysis of various participant characteristics with the two outcome variables. 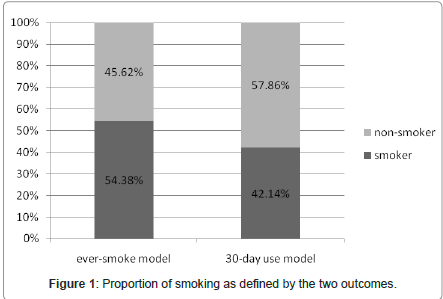 Figure 1: Proportion of smoking as defined by the two outcomes.

Our study reports high rates of cigarette smoking in the sample with more than half of the study population had previously smoked a cigarette (54.4%), and approximately 42% in the past 30 days even after the new law implementation. As previously reported, males are more likely to smoke in the ever-use model [9]. This might be due to the fact that society has higher moral expectations for women and it is considered less acceptable for females than males to smoke. Age below 25 was a significant predictor of smoking in the past 30-day use model as compared to the older age group. This observation can be explained by the popularity of cigarette smoking among students’ age, and the possibility that as participants may be worried about bad heath effects of smoking with increasing age. In our study, we found that the onset age of smoking was 17.25 years old. Future research should concentrate on designing prevention strategies to target at subpopulation around that age group before the individual begins the smoking habit.

We found that participants who achieved lower grades in their school years were more likely to smoke cigarette, which is consistent with previous research [14]. Consequently, knowledge and education are very important in promoting the anti-smoking concept. Moreover, in our survey, we included questions regarding media exposure, either against smoking or for smoking, to examine the influence on an individual’s smoking behavior. Media like TV, radio, newspaper, movie, internet, or teacher were included, and among those, only “teachers’ anti-smoking message” was statistically significant in reducing the smoking probability. Thus, if the government wants to combat the increasing smoking prevalence, school-based tobacco prevention programs might be beneficial. In contrary, participants who have seen an anti-smoking message from TV were more likely to smoke cigarette in the 30-day use model, which is opposite to what one would expect to see.

Betel nut consists of betel leaf (piper betel), areca nut, slaked lime (aqueous calcium hydroxide), and various spices and are widely used in Taiwan [15]. In our study, we found that past betel nut use was a significant predictor of cigarette smoking in both of the models, which is consistent with previous report [15]. In that study, conducted in Taiwan, they mentioned that almost all betal nut chewers were smokers (92.6%), and the chance of becoming a betel nut user among smokers was nearly 10 times higher than among nonsmokers. A study conducted by Shiu et al. [16] showed that smoking and betel nut chewing were two significant risk factors for the occurrence of oral leukoplakia. Thus, effective policies to address this serious problem are greatly needed. Past 30-day alcohol use was also a significant predictor. This might be explained by the fact that both cigarette smoking and alcohol drinking are a part of social behaviors. Smoking or drinking together with friends or co-workers is a way to show their popularity and friendliness. In some cases, smoking and drinking are even necessary for a successful business in Taiwan.

We did initially observe an association between cigarette smoking and past Xanax use, but the association no longer existed after adjusting for other variables. Our survey also asked about a number of other addictive substances including amphetamine, ecstasy, and cigar, but these variables were all insignificant or with very little sample size, so were not included in the final models.

In our study, we found that having a brother or sister who smokes cigarettes was a significant predictor in the ever-use model; having more than half of friends smoke was a predictor in the 30-day use model; and having more than one close friend who smokes was also a significant predictor in both ever and 30-day use model. Smoking appears to be a part of the social event with siblings and friends, and in our study, 65% of the smoking participants smoked their first cigarette with their friends. Thus, the development of any intervention strategy will have to take the social aspect into consideration. On the other hand, we did not find an association between the parents’ tobacco use with smoking status in both of the adjusted models, even though they all were significant predictors in the unadjusted models. Asian parents usually have a more authoritarian parenting style, but maybe there is little influence of parents over someone who had already decided to smoke or not to smoke.

Several limitations to this study can be described. This research was based on convenience sampling, thus we were unable to characterize nonparticipants. The generalizability of the result is also only limited to similar subpopulations in Asia and may not be applicable to other populations in different areas or cultures. Information bias may be a concern of our study, for example, questions like “Have you ever seen or heard an advertisement on TV, internet, or radio in the past month?" may be too difficult to recall.

Despite these limitations, this is the first study to exam cigarette smoking in Taiwan after the new law implementation and the study documented high rates of cigarette smoking with more than half of the study population had previously smoked a cigarette (54.4%), and approximately 42% in the past 30 days. These findings underscore the magnitude of the smoking problem in the Taiwanese population and the urgent need for effective interventions. Future research should focus on developing interventions that incorporate the predictors identified above.

Copyright: © 2011 Wu IH, et al. This is an open-access article distributed under the terms of the Creative Commons Attribution License, which permits unrestricted use, distribution, and reproduction in any medium, provided the original author and source are credited.