The prawns, Macrobrachium species belonging to the family Palaemonidae are decapod crustaceans of high economic importance world-wide and have been subjected to intense aquacultural practices
especially in Asia and the Americas. Macrobrachium rosenbergii is one of the best farmed species in this family. FAO (Food and Agriculture Organisation of the United Nations) gave details of its identification, profile, production, statistics, status and trends. Global production of M. rosenbergii has increased to over 200,000 tonnes/yr by 2002.
Macrobrachium species occur commonly in the West African region and constitute an important part of the artisanal fishery. Two species of these prawns Macrobrachium macrobrachion and M. vollenhovenii are important food items and are good items for exports when fully recruited for aquaculture.

The prawns, Macrobrachium species belonging to the family Palaemonidae are decapod crustaceans of high economic importance world-wide and have been subjected to intense aquacultural practices especially in Asia and the Americas. Macrobrachium rosenbergii is one of the best farmed species in this family. FAO (Food and Agriculture Organisation of the United Nations) [1] gave details of its identification, profile, production, statistics, status and trends. Global production of M. rosenbergii has increased to over 200,000 tonnes/yr by 2002.

Macrobrachium species occur commonly in the West African region and constitute an important part of the artisanal fishery. Two species of these prawns Macrobrachium macrobrachion and M. vollenhovenii are important food items and are good items for exports when fully recruited for aquaculture [2,3].

Despite its economic importance and future potentials very little documented works are available on these prawns in West Africa. Aspects of the biology of the Macrobrachium species occurring in Nigeria have been documented by Marioghae [4] on the ecology and distribution in Lagos Lagoon, Powell [5] on their occurrence in the Niger Delta area, Anetekhai [6,7] on the salinity tolerance and sexual dimorphism in Asejire Lake, Bello-Olusoji et al. [8] on the food of the larvae, Jimoh et al. [9] on the food and feeding habits in Epe Lagoon and Abohweyere [10] on the recruitment pattern in the Lagos-Lekki Lagoon system.

Macrobrachium species live in freshwater and low salinity waters not exceeding 100/00, but their larval stages require brackish water conditions for their survival and optimum development [5,11].

M. macrobrachion and M. vollenhovenii occur in the interconnecting Lagos and Lekki Lagoons where they support an artisanal fishery carried out mostly by women. The Lagos Lagoon with a surface area of nearly 208 km2 is brackish with salinity range of 0.050/00 – 28.70/00 while the Lekki Lagoon with surface area of about 247 km2 is mostly freshwater with salinity range of 0.0 – 3.10/00 [12-15].

While prawn farming is well developed in Asian countries and America [16-18], proposals are just now on hand to culture them in the West African region. Until adequate hatchery systems are developed for production of their seeds, the young prawns may still have to be sourced from the wild. With the heavy population of M. macrobrachion and M. vollenhovenii in the Lagos and Lekki Lagoons, the two lagoons will constitute ready sources of these prawns in south-west Nigeria.

This paper provides information on a comparative study of the biology of M. macrobrachion and M. vollenhovenii in the two interconnecting but environmentally different Lagos and Lekki Lagoons with particular emphasis on the size composition, growth pattern, food habits and reproductive biology. The FAO [12] suggested the opening up of Lekki Lagoon by dredging a channel directly to the adjacent Atlantic Ocean in order to decongest the overcrowded Lagos harbour. The Nigerian government has now decided to build the harbour at Iwopin on the shore of Lekki Lagoon. This will definitely cause a major increase in salinity of Lekki Lagoon. This study will therefore form a documentation of the biology of the Macrobrachium species in the lagoon prior to any ecological changes in the ecosystem.

This study was carried out in Lagos and Lekki Lagoons in southwest Nigeria. Lagos Lagoon is located between latitudes 6º 26′ and 6º 39′N and longitudes 3º 29′ and 3º 50′E (Figure 1). It forms part of an intricate system of waterways made up of lagoons and creeks that are found along the coast of Nigeria from the border of the Republic of Benin to the Niger Delta. The Lagos Lagoon has a surface area of about 208 km2. Some of the physico-chemical parameters have been documented by Adetayo and Kusemiju [19]. The substratum is fine sand and mixed mud. Lekki Lagoon lies between latitudes 6º 25′ and 6º 37′N and longitude 4º 00′ and 4º 15′E (Figure 1). It has a surface area of about 247 km2 and is fed by Rivers Oni and Osun. Both Lagos and Lekki Lagoons empty into the Atlantic Ocean via the Lagos Harbour. The hydrobiology and fishes of the Lekki Lagoon have been documented by Kusemiju [14]. 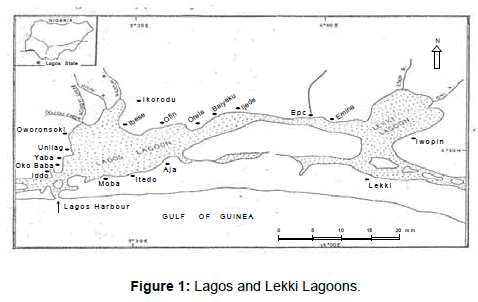 This study was carried out during the rainy season (August to October, 2008) and dry season (January to March, 2009) in Lagos and Lekki Lagoons. Bimonthly samples of M. macrobrachium and M. vollenhovenii were collected in the lagoons from fisher folks. The fishing was done with cone-shaped bamboo basket traps described by Solarin et al. [20] and Jimoh et al. [9]. The basket trap had a two nonreturn valve mechanism at the centre of the trap. It had a total length and opening aperture of about 1.0 m and 0.3 m respectively. Coconut and fresh palm oil fruits were used as baits for the prawns. Selection of prawns was done randomly as they were harvested from the basket traps. The prawns were immediately preserved in an ice-chest with ice-blocks and later transferred into the deep freezer (-20°C) in the laboratory prior to analysis.

Identification: The prawns were identified using morphological characters reported by Holthius [21] and Powell [5]. Both M. macrobrachion and M. vollenhovenii were recognisable by their large second cheliped which usually end in strong pincers. While the chelipeds are stout and singular in M. vollenhovenii, they are slender and the pincer furry in M. macrobrachion.

Sex was determined using morphometric features, such as presence of an appendix masculina on the second pleopods and an appendix interna in the male while only the appendix interna was present in the female. There is also a lump on the ventral view of the first segment of the male abdominal region which could be felt by the tip of finger while it was absent in the female [7,10].

The Total Length (TL) was measured to the nearest 0.1 cm from the orbital notch to the tip of the telson using a Vernier caliper [21,22]. The total weight was obtained by use of a sensitive Sartorius top loading balance (Model 1106) to the nearest tenth of a gram.

Growth pattern: For a comparison of the growth biology of the prawns, the length /weight relationship was expressed as [23]:

The condition factor (K) of the prawns was determined using the formula [24]:

where W = weight of prawns in g, L = total length in cm, b = regression coefficient.

Fecundity estimate: The eggs were weighted and preserved in 4% formalin prior to counting. The total number of eggs was estimated using the gravimetric method. For a given batch of eggs, the total weight was found to 0.001g accuracy. Adapting the method described by Anetekhai, Bagenal and Ofori-Danson [26-28], a random sample from a given batch of eggs was weighed and the eggs in the sample counted. The number obtained was raised by the ratio: total weight / weight of sample, to get the total number of eggs.

The chi- square test was performed for the sex ratio of the prawns:

Table 1: Collection of Macrobrachium species from Lekki Lagoon during Rainy and Dry Seasons.

Table 2: Collection of Macrobrachium species from Lagos Lagoon during Rainy and Dry Seasons. 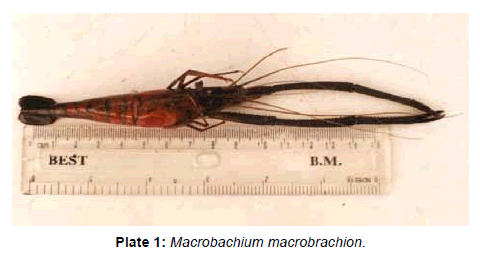 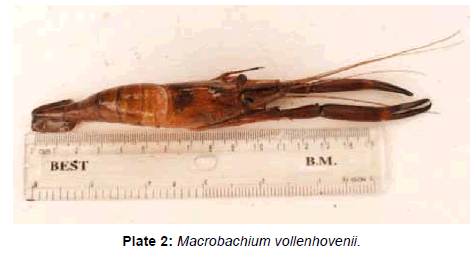 The length frequency distributions of the prawns from the two lagoons are shown in Figures 2 and 3. The prawn populations were made up of one year class. In Lekki Lagoon larger specimens of M. macrobrachion (total length 8.5 cm – 13.4 cm) and M. vollenhovenii (total length 7.9 cm – 14.3 cm) were obtained. In the Lagos Lagoon, the total length of larger specimen of M. macrobrachion ranged from 8.6 cm – 14.1 cm, while M. vollenhovenii ranged from 8.0 cm – 15.2 cm total length.

190 (22.8%) of 854 specimens of M. macrobrachion examined from the Lagos Lagoon had empty stomachs. The prawns fed mainly on plant materials (35.0% by number and 29.6% by occurrence), phytoplankton (algae and diatoms) and insects (Table 8).

316 (22.8%) of the 946 specimens of M. vollenhovenii examined in the Lagos Lagoon had empty stomachs. The prawns consumed plant materials (46.7% by number and 33.9% by occurrence methods), phytoplankton (algae and diatoms) and insects (Table 10).

There were no berried female of M. macrobrachion obtained from both lagoons during the rainy and dry season sampling periods.

The Lekki and Lagos Lagoons in south-west Nigeria support major artisanal fishery that have been sustained for several decades [12-15]. The fishery includes catfishes, tilapias, clupeids, crabs and prawns. Of these, the decapod crustaceans, the Macrobrachium species occur regularly in both lagoons and have sustained the local fishery and served as source of income for the communities and other commercial traders from the major metropolitan cities.

Lagos Lagoon at different periods of the year experiences both low and high brackish water salinity ranging from 0.050/00 to 28.70/00 [13]. Kusemiju [14] reported the maximum salinity in the Lekki Lagoon was 0.30/00 while maximum salinity reported by Lawal –Are [15] was 3.10/00. It would appear that Lekki Lagoon is beginning to experience a low brackish water regime instead of complete fresh-water.

The Macrobrachium species in the two lagoons occurred throughout the year and the size distribution is uniform in both lagoons. More M. macrobrachion and M. vollenhovenii were caught in the Lekki Lagoon in the rainy season (August-October) than in the dry season (January-March). Similar pattern of occurrence was recorded in the Lagos Lagoon for the two prawns. Similar reports on seasonal occurrence of Macrobranchium species have been documented by Marioghae [4] in the Lagos Lagoon and Anetekhai [26] for M. vollenhovenii in Asejeri Lake.

Prawns from the Lekki and Lagos Lagoons showed a linear relationship between length and weight. Apart from male of M. macrobrachion which had an isometric growth in Lekki Lagoon, the prawns exhibited negative allometric growth with values of regression coefficient (b) ranging between 2.4148 and 2.8666 for M. macrobrachion and between 2.2788 and 2.7117 for M. vollenhovenii. The condition factor was also similar in the two lagoons. This growth pattern of the prawns may have its relevance in that the seeds, larvae and juveniles could be collected for aquaculture/stocking into prawn farms from either of the two lagoons.

The percentage of empty stomachs of the prawns from both Lekki and Lagos Lagoons were similar with values ranging from 22.2 - 29.8%. The food items consisted of plant materials and a variety of phytoplankton, zooplankton and insects. There was no regular pattern in the occurrence of empty stomachs and in the choice of food items. The prawns were herbivore and also had preference for algae. This study agreed with the work of Bello-Olusoji et al. [8], Costa and Wanninyaki [29], New and Singholka [11] who reported that Macrobrachium species exhibited various feeding habits from planktivorous to carnivorous.

The work on the biology of Macrobrachium species in Lekki Lagoon recorded here will also form documentation for these prawns pending any further changes in the ecosystem when Lekki Lagoon is channelled to the Atlantic Ocean in order to create a port at Iwopin on the shores of the lagoon.

The authors are grateful to the University of Lagos for the facilities provided for this study and Prof. Kola Kusemiju who reviewed the manuscript.