Determination of Cremophor EL in Rat Plasma by LC-MS/MS: Application to a Pharmacokinetic Study

Copyright: © 2013 Vijaya Bhaskar V, et al. This is an open-access article distributed under the terms of the Creative Commons Attribution License, which permits unrestricted use, distribution, and reproduction in any medium, provided the original author and source are credited.

A rapid sensitive, and selective pseudo MRM based method for the determination of Cremophor EL (CrEL) in rat plasma was developed using Liquid chromatography/Tandem mass spectrometry (LC-MS/MS). The analytes were detected using atmospheric pressure chemical ionization (APCI) tandem mass spectrometry. Plasma concentrations of CrEL were quantified after administration through oral and intravenous routes in male sprague dawley rats at a dose of 0.26 g/kg. The standard curve was linear (0.9982) over the concentration range of 2.10 to 2100.00 μg/mL. The lower limit of quantitation for CrEL was 2.10 μg/mL using 50 μL plasma. The coefficient of variation and relative error for inter and intra assay at three QC levels were 1.23 to 8.87 and -12.08 to 4.10 respectively. CrEL has poor oral bioavailability with mean absolute bioavailability of 2.32%. CrEL plasma concentration profiles after oral and intravenous dosing were without spiky concentration levels. Spiky plasma concentration profiles for new chemical entities (NCEs) are a common phenomenon in drug discovery, which could be due to entrohepatic circulation, sample handling errors. A novel proposal was conveyed to the scientific community, where formulation vehicle can be analysed as qualifier in the analysis of NCEs to address the spiky profiles.

Polyoxyethyleneglycerol triricinoleate (Cremophor EL; CrEL) is a liquid product formed by the reaction of ethylene oxide with castor oil at a molar ratio of 35:1 [1]. CrEL is used as a excipient in formulations for the solubilization of various hydrophobic drugs including anesthetics [2], antineoplastic agents [2,3] immunosuppressive agents [4], analgesics [5,6] vitamins [7] and new synthetic water insoluble compounds. Although CrEL is considered relatively nontoxic [2,8], several reports suggest that drugs administered in CrEL induce serious complications like anaphylactoid hypersensitivity [7], axonal swelling, degeneration and demyelination [3,4]. Moreover, it has been proposed that CrEL plays a role in the etiology of peripheral neuropathy observed after intravenous paclitaxel [3] or cyclosporin A treatment and recent evidence supports the notion that CrEL causes nerve conduction [3,9]. Pharmacokinetic disposition of drugs depends on CrEL pharmacokinetics [10].

There exists different analytical methods for the quantitative measurement of CrEL such as colorimetric [3,12] chromatographic [13-15], electrophoresis [16], potentiometric [17-20] and pyrolysis mass spectrometry [21]. Cleavage and derivatisation of CrEL with UV absorbing group outweighs the usage of colorimetric methods for the analysis of CrEL as it is time taking and involve multiple steps in the process. Also both the chromatographic and electrophoresis methods are time consuming due to tedious derivatisation procedures involved in the process. The potentiometric methods can’t be used for measuring lower levels of the CrEL due to limited sensitivity. Pyrolysis mass spectrometry needs different mass spectrometry design and throughput of analysis was a consideration. In the present work an attempt was made to develop and validate bioanalytical method for the quantitative estimation of CrEL using LC-MS/MS and presented the plasma concentration profiles/PK parameters in male sprague dawley rats. This was the first approach of its kind to quantify the concentration levels of CrEL with pseudo MRM based approach.

Master stock solution of telmisartan (Purity: 98%) (1 mg/ml) was prepared in DMSO. Working standard solutions of CrEL (Purity: 100%) were prepared by serial diluting from master stock (CrEL provided by supplier with density of 1.05 g/mL was used as master stock) with Acetonitrile: DMSO: water (2:2:1). Working standard solutions were prepared at 25 fold higher concentration than plasma calibration standards and quality control samples. A total of nine calibration standards and three quality control samples were prepared. Plasma calibration standards (2.10, 4.20, 21.00, 105.01, 420.05, 1050.13, 1680.21, 1890.00, 2100.00 μg/mL) and quality control samples (6.64, 995.40, 1659.00 μg/mL) of CrEL was prepared by spiking 2 μL of the working standard solutions into 48 μL of blank rat plasma. The working solution for internal standard (100 ng/mL) was prepared by diluting an aliquot of master stock solution with acetonitrile. Master stock solutions were stored at 40C when not in use.

A 50 μL aliquot of plasma (blank control plasma, plasma samples from rats dosed with CrEL, blank plasma spiked with calibration standards and QC samples) was pipetted in to a 96 well polypropylene plate and extracted with 200 μL of acetonitrile containing internal standard. Samples were vortex mixed for 10 min at 1200 rpm and centrifuged at 4000 rpm for 10 min at 4°C. 50 μL of supernatant was pipette transferred in to a fresh analysis plate and diluted with 450 μL of acetonitrile: water (1:1, v/v) and 5 μL aliquots were injected for LC-MS/ MS analysis.

A generic gradient LC method with a short run time of 3.5 min was developed for the analysis of CrEL in plasma samples. The mobile phase flow rate was 1.0 mL/min with a split ratio of 1:1 to the ionization source. The mobile phase consisted of 10 mM ammonium acetate in water as aqueous component and 100% acetone as organic modifier. The column and autosampler were maintained at 40°C and 4°C respectively. The turboionspray source was operated with typical settings as follows: ionization mode, positive; curtain gas, 20 psi; nebulizer gas (GS1), 50 psi; heater gas (GS2), 50 psi; nebulizer current (NC), 5A; temperature, 500°C. The molecular ions of CrEL and telmisartan were formed using the declustering potentials of 110 V, 65 V respectively. Molecular ion of telmisartan was fragmented at collision energy of 65 V by collisionactivated dissociation with nitrogen as the collision gas at a pressure setting of ‘medium’ on the instrument. Molecular ion of CrEL didn’t generate distinct fragment ions in product ion scan. So pseudo MRM mode was used, where molecular ion is monitored as a fragment ion with minimal collision energy of 5 V. Multiple reactions monitoring (MRM) mode was employed for the quantification: m/z 133.10→133.10 for CrEL (Pseudo MRM) and m/z 515.3→276.1 for telmisartan. Peak areas for all components were automatically integrated using Analyst software version 1.5.

The atmospheric chemical ionization of CrEL produced the abundant protonated molecules ([MH]+) at m/z 89.10, 133.20, 177.20 (Figure 1a) under positive ionization conditions. These masses correspond to insource fragmentation of CrEL and didn’t generate further distinct fragment ions. Molecular ion with 133.10 amu mass (three ethylene oxide units) [25] was selected as both precursor, fragment ion and analyzed in pseudo MRM mode. The atmospheric pressure chemical ionization of telmisartan produced abundant protonated molecules ([MH]+) at 515.20 amu and generated an intense fragment at 276.10 amu (Figure 1b). Figure 1c shows the insource fragmentation pattern of CrEL. Of the three molecular ions, molecular ion with 133.10 amu mass was selected as it had better selectivity without any interference from endogenous components. So, pseudo MRM transition of m/z; 133.10/133.10 was used to monitor the PK plasma concentration profiles of CrEL in both oral and intravenous routes of administration. The selected transition wasn’t selective in ESI mode of analysis with interfering peak eluting at the same RT of CrEL from blank plasma. Due to selectivity issues in ESI mode of ionization, CrEL was analyzed in APCI mode of ionization. Pseudo MRM 133/10/133/10 was free from blank interference in APCI mode of ionization. However, interference from blank was observed for molecular ion at m/z, 89.10 even in APCI mode of ionization and molecular ion at m/z, 177.20 isn’t sensitive enough to be selected as molecular ion for pseudo MRM generation. Calibration standards were prepared by serial dilution from the master stock. Various diluents combinations such as methanol: water (1:1, v/v), water, acetonitrile: water (1:1, v/v), methanol: acetonitrile: water (2: 2: 1, v/v) were tested for serial dilution of calibration standards. Calibration linearity wasn’t achieved with any of the solvent combinations tested. Acetonitrile: DMSO: water (2: 2: 1, v/v) combination as a diluent helped in achieving better linearity than the other solvent combinations tested. 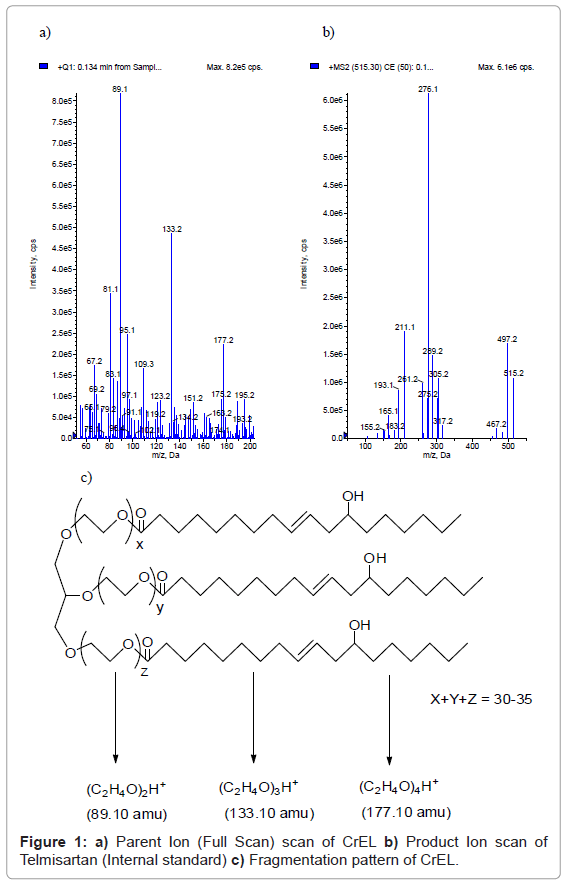 Use of 10 mM ammonium acetate as aqueous modifier had better baseline separation from interfering peaks than acidic aqueous modifiers. Various organic modifiers such as acetonitrile, methanol and acetone were tested for achieving better peak shape and address the response saturation observed at higher calibration standards for CrEL. Both acetonitrile and methanol didn’t produce sharp peak and response saturation was observed at higher calibration standards. However, acetone as organic modifier helped to achieve sharper peak shapes and response saturation at higher calibration standards wasn’t an issue here. Final mobile phase composition used for the analysis of CrEL was 10 mM ammonium acetate in water as aqueous modifier and 100% acetone as organic modifier.

Because of the higher sensitivity of LC-MS/MS method compared to that of HPLC or colorimetric methods, lesser plasma sample volume (50 μL) is sufficient to obtain an LLOQ of 2.10 μg/mL. No interference at the retention times of CrEL (1.45 min) (Figure 2a) and telmisartan (1.81 min) (Figure 2b) was observed in any of the lots screened as shown in representative chromatogram of the extracted blank plasma sample, confirming the selectivity of the present method. Representative chromatogram of CrEL at LLOQ was shown in Figure 2c. Representative chromatogram of Telmisartan at 100 ng/mL spiked concentration was shown in Figure 2d. The LLOQ was set at 2.10 μg/mL for CrEL using 50 μL of rat plasma. The signal-to-noise ratio for CrEL is greater than 5 (S/N; 6.4) at 2.10 μg/mL. The retention times of CrEL and telmisartan were reproducible throughout the experiment and no column deterioration was observed after analysis of plasma samples. 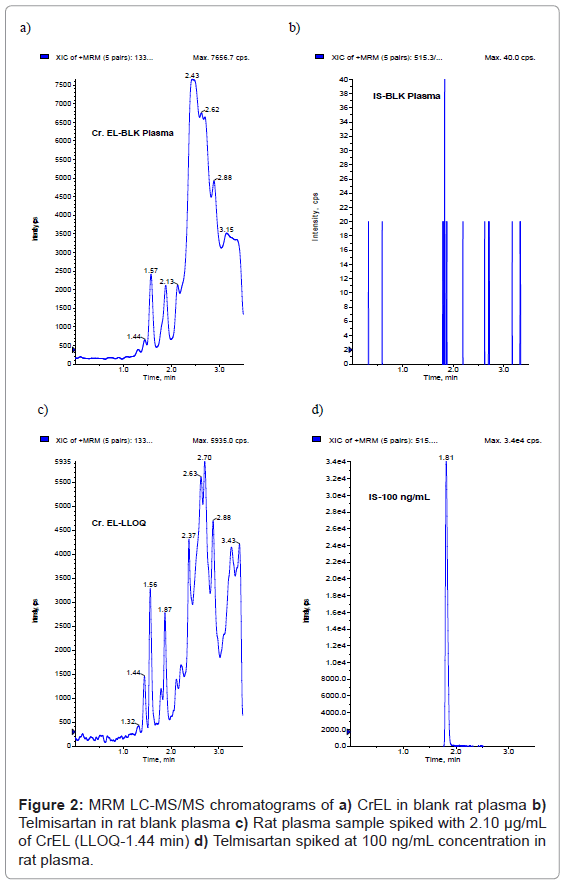 The developed method was validated as per the FDAs guidance for bioanalytical method validation [26]. Calibration curves were obtained over the concentration range of 2.10-2100.00 μg/mL of CrEL in plasma. Quadratic regression with a weighting of 1/(x×x) generated optimum accuracy for the calculated concentrations at each level (Table 1). The low CV value at each concentration level indicates the precision of the present method (Table 1). Summary of intra, inter-day precision and accuracy data for QC samples was shown in table 2. Intra and interassay CV values for CrEL ranged from 1.23 to 8.87% across three QC levels. Intra and inter-assay RE values for CrEL ranged from -12.08 to 4.10% across three QC levels. These results of acceptable RE and %CV indicate the acceptable accuracy and precision of developed method. As shown in table 3, the overall extraction efficiency of CrEL was 89.99%, which was consistent with a total % CV less than 9% at three QC concentration levels. Mean matrix factor values of 0.95 (Table 3) at three QC levels shows that the developed method is totally free of matrix effects. Acceptable matrix factor range for qualifying the method to be free from matrix effects is 0.85-1.15. Protein precipitation as extraction procedure has been used successfully used to extract CrEL from rat plasma. Autosampler stability for 24 h at 4°C with <9% (Table 3) difference from theoretical concentration, benchtop stability for 8 h at room temperature with <4% (Table 3) difference from theoretical concentration was proved for extracted QC samples at three concentration levels. Spiked QC samples were stable for three freeze thaw cycles (freeze thaw stability) with <6% (Table 3) difference from theoretical concentration. Long term stability at -80°C was proved for a period of 60 days with <5% (Table 3) difference from theoretical concentration.

Table 2: Precision and accuracy of CrEL in quality control samples.

Table 3: Summary of validation parameters for CrEL in rat plasma. 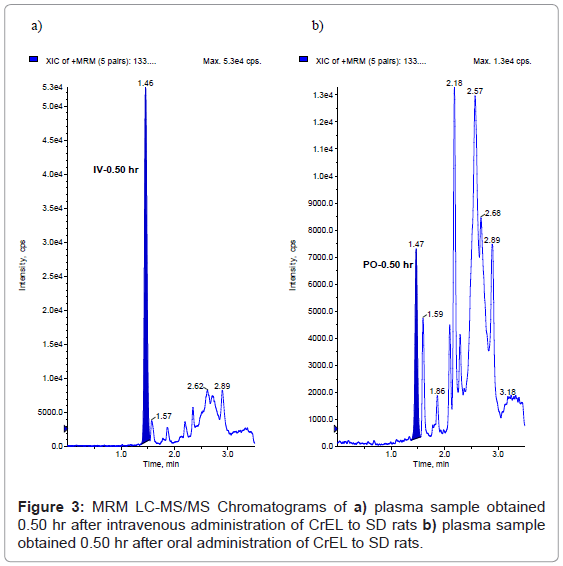 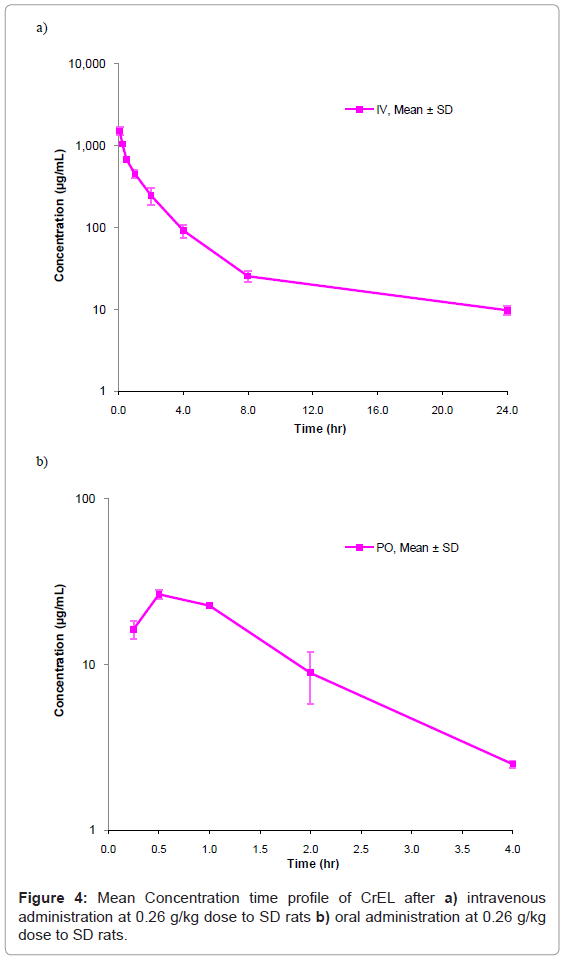 A rapid, sensitive and reliable pseudoMRM based LC-MS/MS method with protein precipitation as extraction technique has been successfully developed and validated for the analysis of CrEL in Sprague dawley rat plasma. The developed assay method has acceptable sensitivity (LLOQ: 2.10 μg/mL), precision, accuracy, selectivity, recovery, stability and can be used to address the spiky concentration profiles observed with NCEs. The validated method was successfully applied to assay rat plasma samples. The plasma concentration profiles/ PK parameters of CrEL after intravenous and oral administration in sprague dawley were demonstrated.