Copyright: © 2010 Liu SJ, et al. This is an open-access article distributed under the terms of the Creative Commons Attribution License, which permits unrestricted use, distribution, and reproduction in any medium, provided the original author and source are credited.

Chaihu (Radix bupleuri, Chinese thorowax root) is a favorite medicinal herb in traditional Chinese medicine (TCM) and is used as a key ingredient herb for many Chinese multiherb remedies. There are 40 species of the Bupleurum grown wide in china, while only two of them, the dried roots of Bupleurum Chinese DC., known in commerce as ‘Bei chaihu’ (Northern Chinese Thorowax Root) and the dried roots of Bupleurum scorzonerifolium Wild., known as ‘Nan chaihu’ (Southern Chinese Thorowax Root), are used in therapeutic practice. In China, Radix bupleuri is traditionally used to relieve fever, to calm the liver and to cure drooping and ptosis [1]. 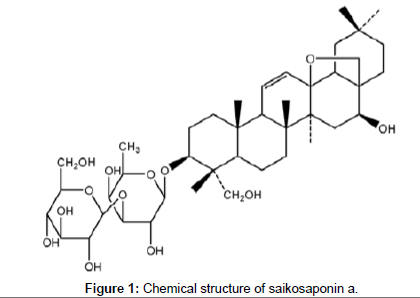 Figure 1: Chemical structure of saikosaponin a.

Sai k osaponin a and the reference substance of felod ipine were purchased from NICPBP (National Institute for the Control of Pharmaceutical and Biological Products, China. batch number: 110777-200405 and 100717-200501). Water was produced by a Millipore (Bedford, MA, USA) Milli-Q water system. Methanol and acetonitrile (Merck, Germany) were of LC-grade.

An Alliance 2695 LC system (Waters, Milford, MA, USA) coupled with a triple-quadrupole tandem Waters Quattro Micro mass spectrometer was used. The Mass Lynx 4.1 software was used for instrumental control and for acquisition and processing of the data. AMS detector with an electrospray ionization (ESI) interface in negative ion mode (ESI-) was used for quantitative analysis, with acquisiton in SIM mode. The m/z ratios [M-H]-, m/z=779.2 for saiko saponin a and [M-2H ]-, m/z=382.0 for felod ipine were recorded simultaneously.

LC separation was performed on an Agilent Zorbax SB-C18 (150 mm×2.1 mm, I.D,5 µm) column (Agilent Technologies, Wilmington, DE, USA) with a Security Guard (12.5 mm×2.1 mm, I.D.5 µm) column (Agilent Zorbax SB-C18, DE, USA), kept at 30°C. The s ensitivity of MS detection is directly dependent on the number of ions produced from the mobile phase in the interface. It is expected that mobile phase additives will affect the sensitivity of LC–MS. Use of neutral buffer (ammonium acetat e or ammonium formate) or weak acid (acetic acid) led to good response compared with use of alkaline solution. On the basis of these results, the mobile phase, consisting of methanol and deionized water containing 0.1% ammoni um acetate (84:16, v/v), a flow rate of 0.2 mLmin-1 was selected as mobile phase additi ve for detection of saiko s aponin a.

Stock solutions of saikosaponin a (478 µg mL-1) and felodipine as an internal standard (408 ng mL-1) were prepared in methanol. The stock solutions were protected from light and kept at 4°C until used. The stock solutions were successively diluted with methanol to prepare working solutions just prior to use. These solutions were spiked into drug-free rat plasma samples to give final concentrations of 10, 25, 50, 100, 250, 500,2500,5000 ng mL-1 Quality control (QC) samples were prepared to the target concentrations of approximately 40, 400, 4000 ng mL-1 in the same way as the plasma samples for calibration. Standard calibration samples and QC samples were stored at -20°C until use.

To each of dispos able plastic tubes with 100 µL plasma samples (calibration standards, QC samples, pharmacokinetics plasma samples), 10 µL of I.S.(felodi pine, 408 ng mL-1) was added except the blank plasma sample. After vortexed for 30s, 300 µL of acetonitrile was added to each of these plasma samples. The obtained solution was vortexed for 3 min at room temperature. The mixture was centrifuged at 12,000 rpm for 10 min. An aliquot of 320 µL of the upper organic layers were transferred to polyp r opylene tubes and evaporated to dryness in the centrifugal thickener (Centrivap console, Labconco Co, USA) at 50L for 120 min. The residue, dissolved into 100 µL mobile phase, was vortexed for 2min and then centrifuged for 10min at 12000g. 10 µL supernatant was injected into the LC/MS/MS system for analysis.

The method validation assays were carried out according to the currently accepted U.S. Food and Drug Administration (FDA) bioanalytical method validation guidance [15]. The method was fully validated for its specificity, linearity, lower limits of quantification (LLOQ), accuracy and precision. To evaluate assay specificity, six independent lots of rat blank plasma were analyzed for excluding any endogenous co-eluting interference by comparing them with the assay of plasma spiked with analytes. The precision was calculated as the relative standard deviation (RSD) a nd the accuracy was evaluated as analytical recovery. For validation of the bioanalytical method, accuracy and precision should be determined using a minimum of five determinations per concentration level (excluding blank samples). The mean value should be within 15% of the theoretical value, except at LLOQ, where it should not deviate by more than 20%. The precision around the mean value should not exceed 15% of the CV, except for LLOQ, where it should not exceed 20% of the CV. Intra-day precision and accuracy were evaluated at three different plasma concentrations (40, 400, 4000 ng mL-1) by replicate analytes of five spiked plasma samples on the same day. The inter-day precision and accuracy determinations were carried out on three different days. Recovery experiments were performed by comparing the analytical results of extracted samples at three concentrations with pure standards without extraction. The LLOQ was considered as the concentration that produced a signal-to-noise (S/N) ratio greater over 10. The sample solution stability was assessed at three concentration levels (40, 400, 4000 ng mL-1). The freeze and thaw stability study samples at three concentrations were stored at -20°C and subjected to two freeze–thaw cycles. The short-term stability of saikosaponin a during storage in the autosampler at 4°C, was performed by repeated injection every 2 h for a period of 10 h. The long-term stability of saikosaponin a in plasma was assessed in three concentration levels after storage at -20°C for 4 weeks. 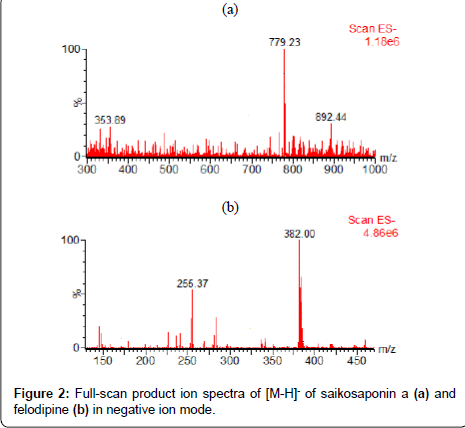 Figure 2: Full-scan product ion spectra of [M-H]- of saikosaponin a (a) and felodipine (b) in negative ion mode. 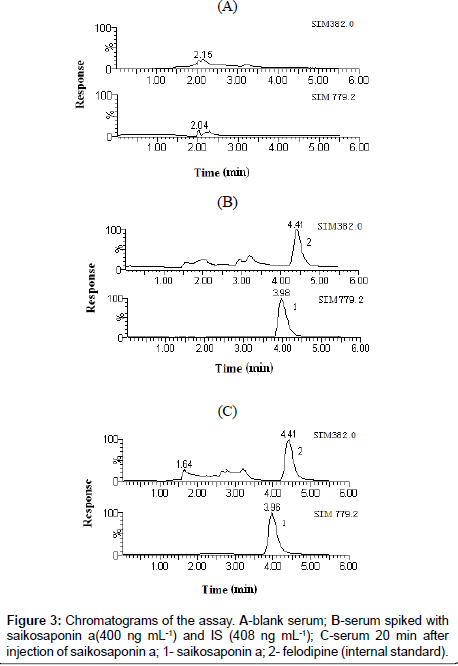 Figure 3: Chromatograms of the assay. A-blank serum; B-serum spiked with saikosaponin a(400 ng mL-1) and IS (408 ng mL-1); C-serum 20 min after injection of sa ikosaponin a; 1- saikosaponin a; 2- felodipine (internal standard). 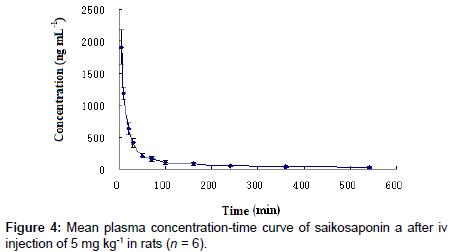 Linearity of calibration curves and lower limits of quantification

Different solvents for the extraction of saikosapon in a from rats plasma have been reported. During the method development, we tried using less toxic solvents suchas ether, methanol and acetonitrile for the extraction of saikosaponin a, but did not obtain a good recovery of saikosaponin a until the centrifuga l thickener was employed. In this paper, centrifugal was developed compared with a simple and efficient liquid-liquid extraction. The recoveries of saikosapon in a determined at 40, 400, 4000 ng mL-1 were 82.6±7.6%, 87.1±6.1% and 81.8±3.4%, respectively, while the recovery of the IS determined at 408 ng mL-1 was 83.0±4.6% (Table 1) These results were indicative of good recovery.

The matrix effect of blank plasma in the six batches spiked after the sample preparation with 40, 400, 4000 ng mL-1 of saikosaponin a were found to be within the acceptable range (Table 1). The same evaluation was performed on the IS and no significant peak area differences were observed (Table 1). Thus, we concluded that ion suppression or enhancement from plasma matrix was negligible for this assay.

Table 2: Intra- and inter-day accuracy and precision of saikosaponin a assay in rat plasma.

A LC-MS assay for the simultaneous saikosapon in a and felodipine (IS) plasma concentration was developed. The main advantages of this method are: (1) small amount of sample required (100 µL of plasma); (2) processing is simple and rapid; (3) excellent recovery; and (4) short analytical time. The new method was successfully applied to the characterization of pharmacokinetics of saikosapon in a in rats after intravenous injection. While there are only few pharmacokinetics data published on saikosaponin a, this simple, accurate, precise and robust analytical method could be useful for such studies.

This project was support by Key Technologies R&D Program of China (2006BAI14B07).